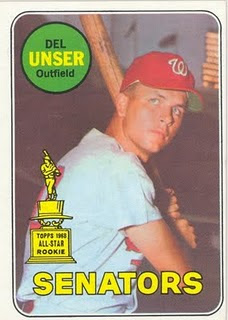 I do not own this card. It's the first awesome night card that I have shown that is not in my collection.

If everything goes right, I will have the card before the weekend is out.

There is supposed to be a card show this weekend. As usual, I will have to travel an hour to get there. As usual, the weather sucks here in January. As usual, they're calling for snow the day of the show. I don't know how much snow or where it's going to land right now, and I probably won't know until it's time to get in the car to drive there. That is the beauty of living next to a giant body of water. Not even the meteorologists have the slightest idea of how bad it's going to get. They talk in extremely general terms and you wonder why they're getting paid.

So, if I do get to the show, job one will be getting the 1969 Topps Del Unser night card. Because I'm sick of wanting it.

After that, I will shop carefully. I have less money for this show than any show I've gone to in the last four years. So this is my list:

Notice everything there is vintage. That's where my head is at the moment.

If I do get the Unser card, then you'll be seeing it as the awesome night card subject again next week. Because I need to document everything I like about it in the most excruciating detail possible.

Oh, and I also may find something cool for a trade partner or two.

But don't get your hopes up, unnamed person. The cash is low and the snow could be high.

Collective Troll said…
Focus on the 81 Traded Fernando... I have a pretty good package ready for ya... I do hope you find the Unser card... I am heavy on the pet peeves and I HATE it when people post cards they don't have. Its not as bad as people posting pictures that they didn't take without leaving a photo credit. Ergghh... Getting angry just thinking about it. Have fun at the show! drive safe...
January 30, 2010 at 2:03 AM

dayf said…
As a card show veteran and experienced scrounger, I have this advice for you:

BRING EVERY WANTLIST YOU EVER MADE

If you have a wantlist, print it and bring it. If there's something you line but you havent written up the wantlist yet, write it up before you go. If there's a wantlist from some set you got bored with 7 years ago that you scribbles on the back of a shopping list, bring it.

Good job on the focus there (get that Fernando!), but when you're at a card show with plenty of time and very little cash, there's nothing more aggravating than seeing something you like really cheap in a bargain bin but you don't have a list so you don't know if you need it.

deal said…
good luck, may the weather be with you. That is a pretty ambitious want list for the small funds trip.
January 30, 2010 at 8:10 AM