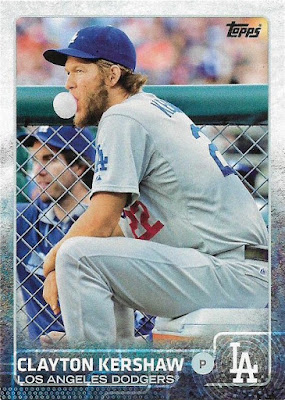 I mentioned in the last post that I received some cards from Royals and Randoms. The star of the package was this short-print of Clayton Kershaw from last year's flagship set. Josh pulled it out of a repack, which doesn't amaze me too much anymore as I've seen all kinds of cool things come out of repacks over the years.

This card is more rare than your average Allen & Ginter/Heritage short-print. It's known as an "SSP" in hobby abbreviation lingo, which stands for "super short-print," although many times I've called it a "stupid short-print."

I am conflicted about these like I am about many modern day inventions in the hobby. On one hand the card is indisputably stellar. I've been a fan of card variations since the late 1970s when I first saw Burger King cards. There is nothing that will turn my head quite like a different photo of the same player on the same design.

But on the other hand -- the stupid hand -- there is the intentional rarity, the selecting of a photo that is quite appealing but limiting it in order to get people to spend more money for it. That kind of cynicism is what killed the hobby that I knew in the '70s and '80s.

I would much rather have photos like this in the base set. Flagship sets are filled with action photos, no doubt fully supported by MLB, which wants to make sure we think these players are superheroes (but with hearts of gold). But growing up collecting in the '70s and '80s, I saw a mix of action, candid and posed photos. I still prefer that.

But in order to get candid photos like players hanging out in the dugout blowing bubbles, I have to shell out extra money. 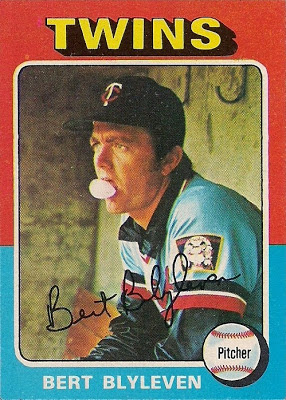 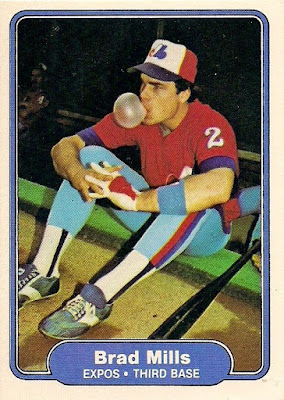 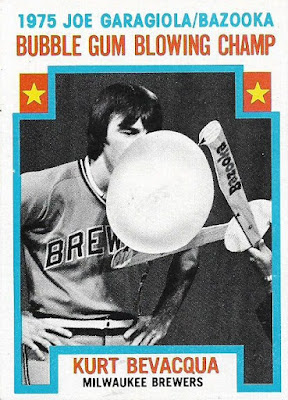 Those are all cards of players blowing bubbles ... in the base set. There was no need to spend $12 to buy one of these cards.

Don't get me wrong, Clayton Kershaw's 2015 Topps base card is terrific. 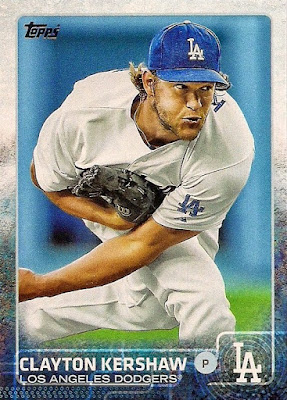 I called it "beautiful" the moment I pulled it from a pack.

I also known that there are still some candid photos in Topps flagship. I guess I'd just like more of a mix. When I see an SSP of a player blowing a bubble or juggling baseballs or wearing goofy glasses, my mind goes right to the hundreds of closeups of pitchers efforting on the mound, one weird strained face after another with nothing to differentiate the players except the uniform colors (i.e. their superhero cape).

Saving all the cool cards for the super/stupid short-prints just says that Topps (and many collectors now) doesn't care about the base set.

I'll still say variations are cool -- because dammit my brain still says they are -- but I sure wish I didn't have to pay the asking price for those.

Fortunately, with Kershaw's SSP I was able to work out a trade. Writing this blog pays off again.

I got a few more cards in the package to go with Stupid-Super Kersh. 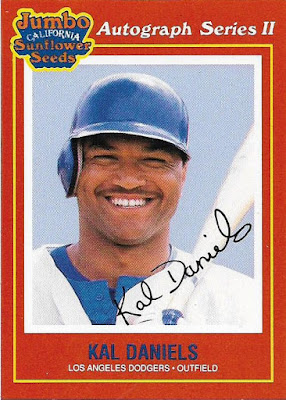 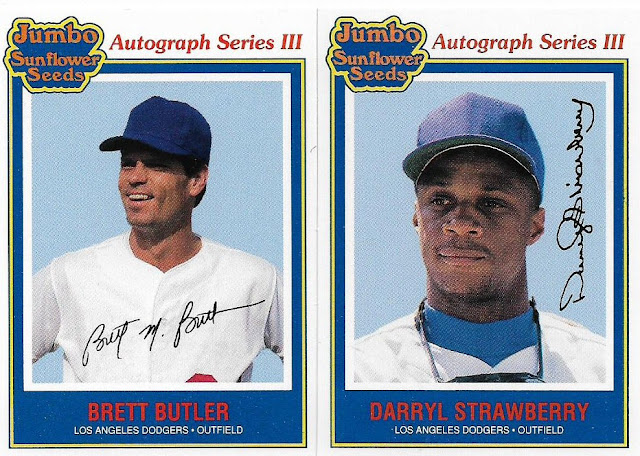 Josh must've been eating a lot of sunflower seeds in the early '90s. These never cease to crack me up. 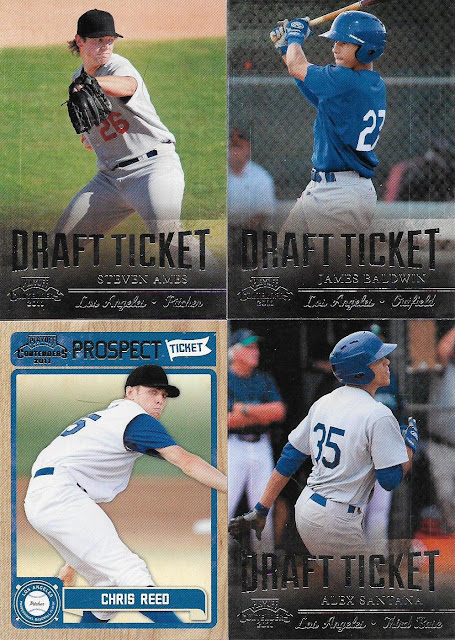 Woooo. Prospects in logo-less uniforms! That was a bright idea. 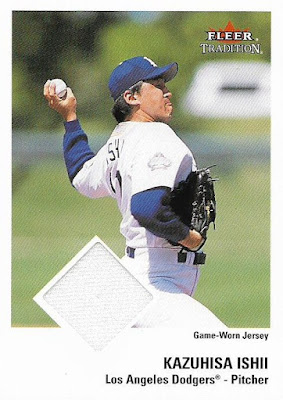 A clean white swatch from former hobby sensation Kaz Ishii. If you want to know how little people care about 2002, just look up the prices on Kaz Ishii cards. 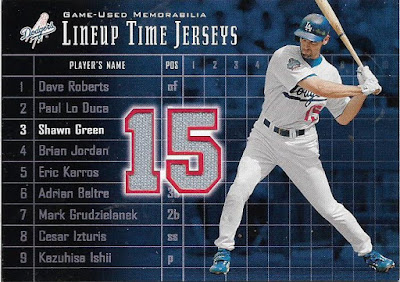 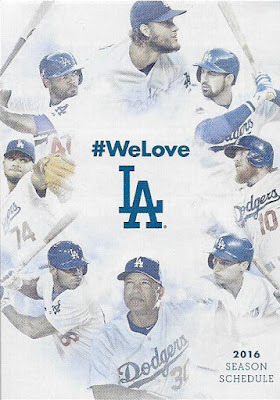 This is reminiscent of a Dodger yearbook from my youth: 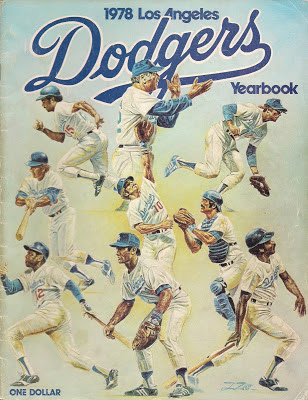 Note the price on that yearbook.

That's not going to buy any SSPs.

Cardboard Jones said…
It's an absolutely glorious card. Would much rather chase after short-printed variations than colored parallels (or sparkly ones, or snowflake ones, or...)
January 21, 2017 at 9:20 PM

Fuji said…
Cool card. I have no issues with SSP cards... other than the fact that I'll never know how many I've actually given away to students or fellow bloggers, because I didn't realize it was a short print. Then again... my loss is their gain.
January 21, 2017 at 9:44 PM

Anonymous said…
It's tough to be a team collector and feel the desire/need to grab all the variations...overwhelming!
January 21, 2017 at 10:15 PM

Commishbob said…
SPs, SSPs, SSSSPs... part of why I don't care about collecting more than a couple cards from any one current set.

RunForeKelloggs said…
I was just telling my younger brother about SSPs last week. To me SSPs were those awesome early 1970s cars that had a rip cord. Pull the cord and it would travel at least 50 yards. Do you remember those? I'd prefer to get one of those again instead of the SSP cards.
January 22, 2017 at 8:31 AM

Stack22 said…
I really hate the SP/SPP/Variation photos on base cards. I feel like they violate the fragile peace between traditional set builders like myself, and insert chasers. They can have their individually numbered argyle chrome refractor spinwheel cards with DNA slices and jock-straps cut up and inserted into them. That's fine. I don't want them, and if I pull one I can send them to someone who does.

These though feel like base cards, and as a base card, I should have it, and their shouldn't be more than one card per number in a set. It's irritating.
January 23, 2017 at 11:22 AM

Josh D. said…
Though I live in California now, all the California Sunflower Seeds cards came to me over Christmas from my mom who volunteers at a thrift store. In Iowa. Someone had donated a box and she called me to ask if she should buy them. She gave me the box that had quite a few Seeds cards, some Mother's Cookies cards, some Starline/Long John Silver's cards, and then some miscellaneous junk base. So the California food-release collector decided to donate all his stuff to a middle America thrift store....
January 24, 2017 at 1:41 PM