It was my lucky day 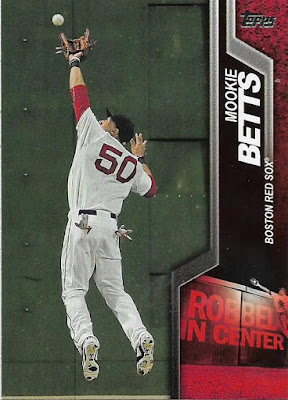 I believe we just received two feet of snow in less than 24 hours. It's difficult to measure because lake effect snow doesn't sit still for a second, but it's been going nonstop since overnight last night. We're in a bit of a break now, but I expect it to start up again soon.

All of this is nothing new around here, but it's still a pain cleaning off cars, shoveling driveways, driving when you can't see 20 feet in front of you, only to get to work so you can get an email lecture from the boss.

Fortunately, I have yesterday to get me through today. Because yesterday was my lucky day.

I emphasize "day" because, as you know, I'm a night owl. The best things usually happen for me at night. But on this particular day, I got up early (mostly to get ahead of the coming storm) to run a few errands. And one of those errands was using one of my Target Christmas gift cards. Weeee!

I wanted to get something different with this gift card. But when I got to the card aisle, there wasn't much different that interested me. I'm certainly not spending $44 to buy the complete set of 2016 Topps, and everything after that was the usual blasters and packs. (This is the problem with Target: it's either 2016 or nada).

But I found one of those $19.99, 20-pack boxed repacks and decided to take a gamble on that. The only pack I could see through the window enough to tell what was in it was a rack pack of 2015 Heritage. OK, fine. I tried to fiddle with the packs to see what the five silvery packs were, but all I could make out was they weren't 2012 Triple Play, and that was good enough for me.

But when I got the box home, I was sorry I bought it. 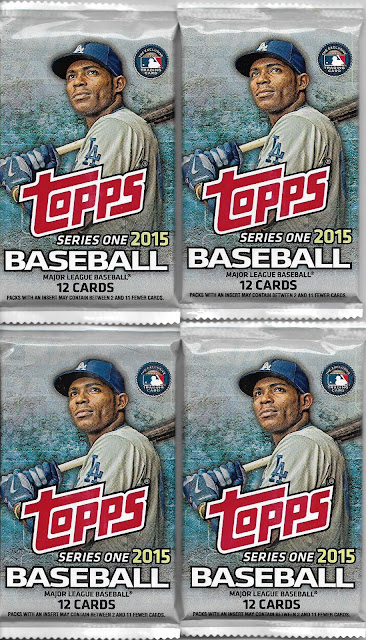 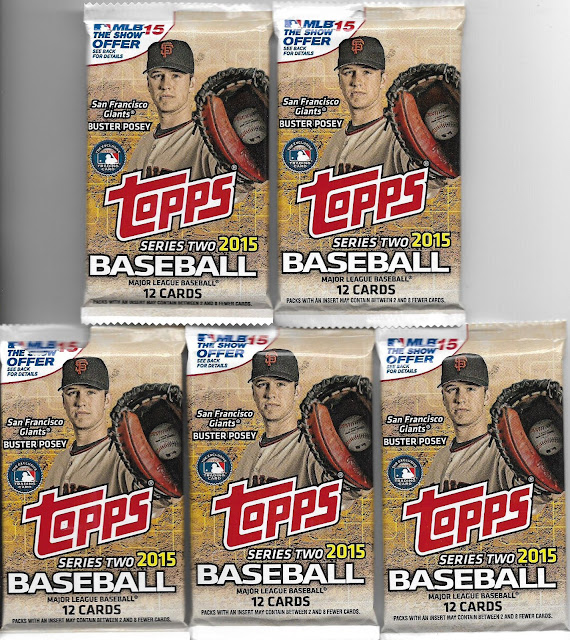 This would be all very well-and-good if I hadn't already completed 2015 Topps. So now I was staring at nine packs of doubles, with only some inserts to get me through.

It didn't get any better as I pulled out the other packs. 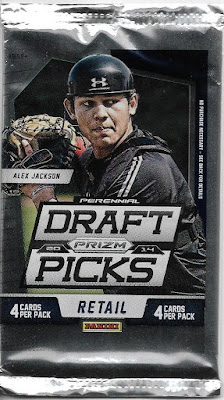 The silver packs that I couldn't read were all 2014 Panini Prizm Draft Picks. Yuck. Still better than Triple Play, but not by much. And five packs worth. 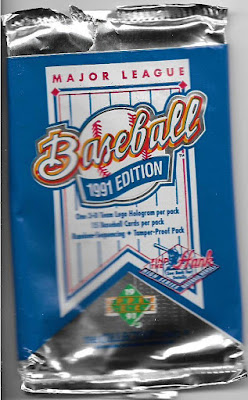 There were two packs of 1991 Upper Deck. Not exciting at all. 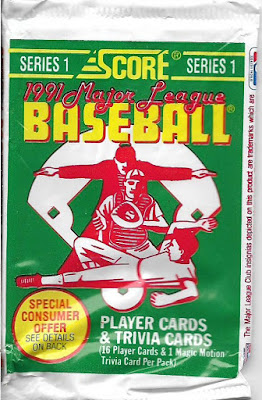 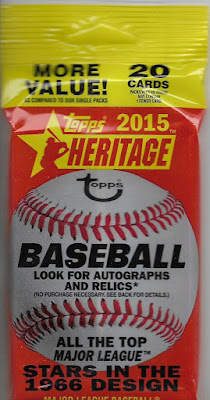 I can't really say I was looking forward to opening any of this.

The box guaranteed a relic. And after I pulled the packs out of the box, I saw the relic resting on the bottom. Like a relic of this nature should be doing. 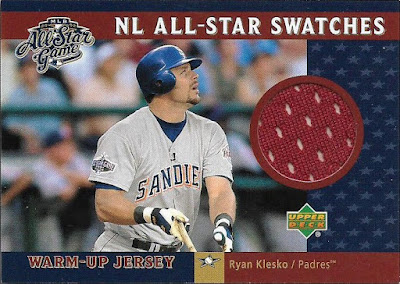 But, remember, I said this was my lucky day. So something good had to happen, right?

I started with the four packs of Topps Series 1, completely resigned to my fate. I shuffled through familiar card after familiar card and remembered that I still haven't finished cataloging my complete 2015 Topps set and 2017 Topps is showing up in a month.

That's when the following card arrrived 7 cards into the first pack: 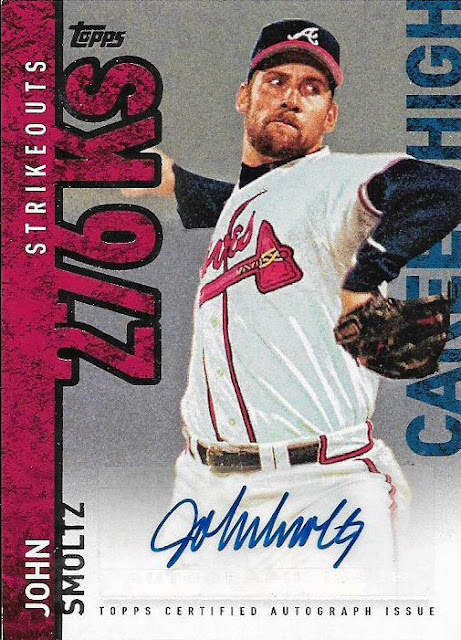 All of a sudden the entire box was a success.

I can count on one hand the number of times I've pulled an autographed card of a Hall of Famer out of a repack box. And I'd be able to do the same if I lost four of those fingers in a tragic snowblowing incident.

It seems my good retail luck from 2016 has continued.

My mood suddenly brighter, I continued on to pack two. That's when this card fell out: 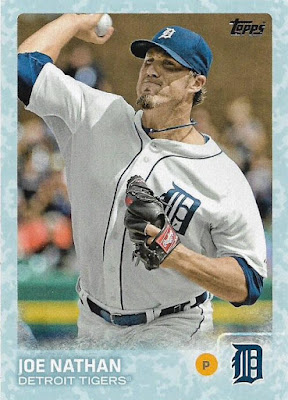 That is one of those "snow-camo" parallels numbered to /100. It's only the second time I've pulled one of those cards.

By now I was as giddy and buzzy as a night owl can be at 11 in the morning, and eagerly opened pack three. But all it revealed was an insert I didn't have already. 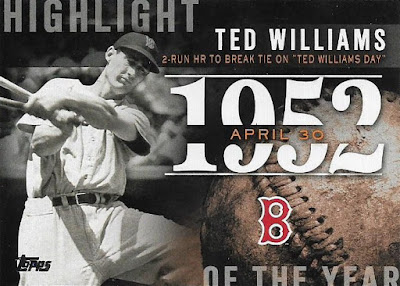 It's a nice insert. I will always accept a card of my dad's favorite player. But it lacked the wow factor of packs one and two. 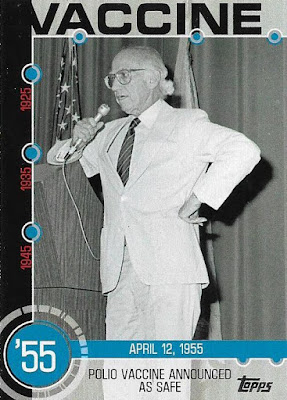 By pack four, we were back to your average "what the hell" inserts. I thought I had gotten rid of this card in a trade and now here it is again. I don't like it when Topps tries to do its Allen & Ginter/Heritage thing in flagship.

Nothing was out of the ordinary after that. Out of the five Series 2 packs came these inserts: 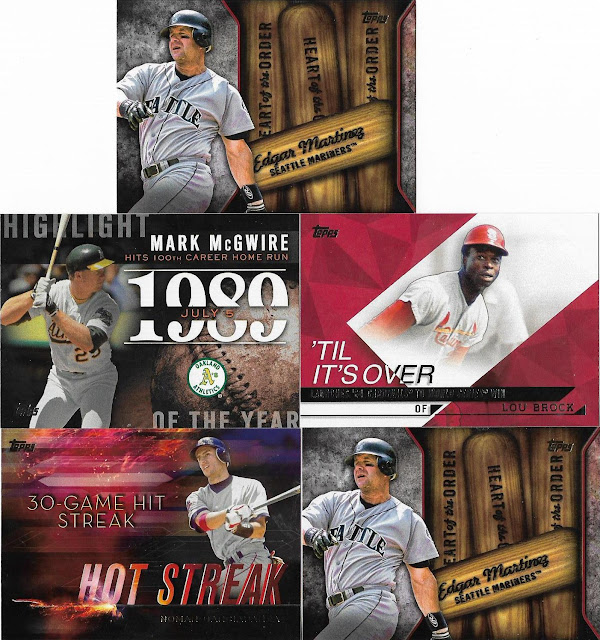 Yes, you saw that right: two of the same Edgar Martinez baked bread insert. And I have one of those already! 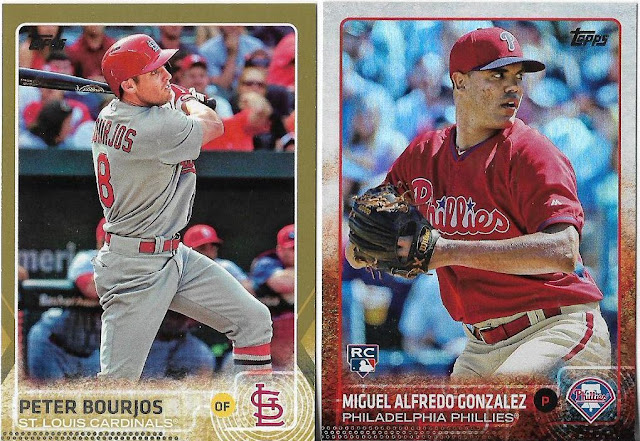 Those were about as exciting as the parallels got. (The Gonzalez card is a foily -- love how I have to keep pointing that out).

From there I plunged into less interesting packs. 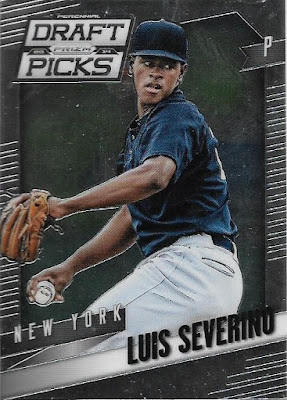 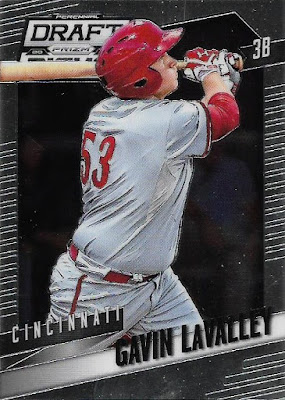 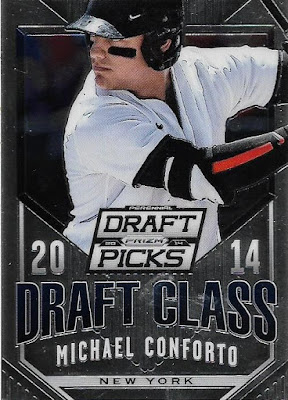 The Prizm packs yielded exactly three players (out of 20) that I've heard of, and one is only because a fellow card blogger collects Gavins. 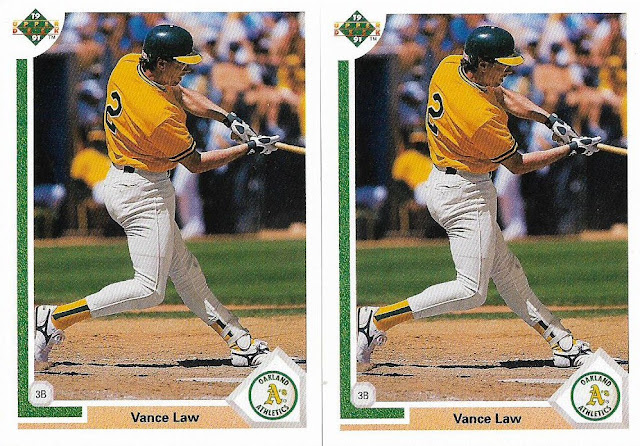 The Upper Deck packs yielded two Vance Laws in the same pack. I don't remember collation being this awful until Upper Deck came along. 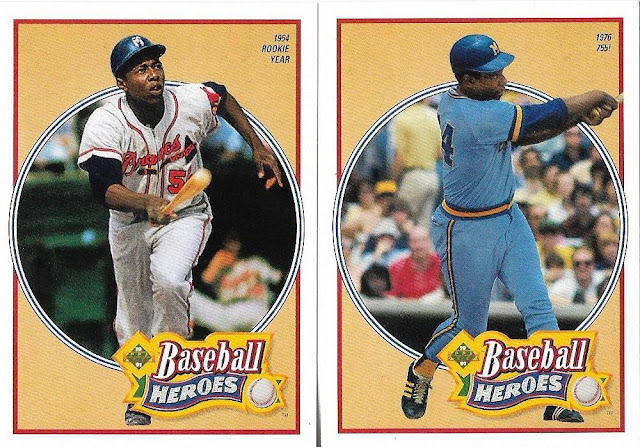 But there was a Baseball Heroes Aaron insert in each pack, so that canceled out the double Laws. 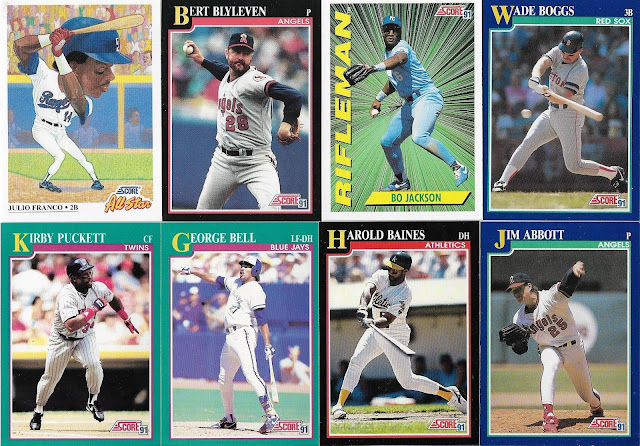 The Score pack was fun to open and kind of rekindled what I liked about opening '91 Score in the first place. But the Blyleven, Baines and Abbott are all dupes and so are several other cards I didn't show. At least the Franco and Bo are new. 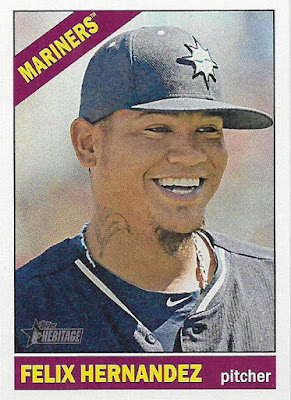 Finally, the Heritage pack that I opened last merely reminded me of why I didn't buy much 2015 Heritage in the first place (too many ugly closeups) and produced this short-print that I already have. And it clued me into the fact that Felix has a neck tattoo (when is this trend going to go away forever?)

But none of that mattered because of what I pulled out of the box seven cards in. My box was a success despite everything that followed.

After my Smoltzie pull, the box bombed, the snow beat down, work showed me why I despise it sometimes, and -- let's look outside -- oh, I have to clear the cars off again!

But remember, yesterday was my lucky day. 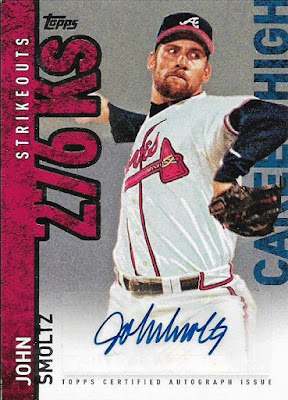 It's amazing what one card can do.

Nachos Grande said…
Good luck with the snow! Nice to see a repack yield something besides Triple Play.
January 5, 2017 at 9:16 PM

Coast To Posts said…
Those repack boxes, ohhhhh those god forsaken retail repack boxes... I hate them but love them at the same time, I like the variety and the possibilities; thus in the end they usually always leave me with a feeling of buyers remorse. You did really well on your box, congrats on overcoming the odds.
January 5, 2017 at 9:25 PM

Anonymous said…
Best of luck with that snow man...couldn't imagine having to deal with that kind of weather and have places to be.

The Smoltz auto is fantastic! Congrats on a great pull. I've had terrible luck with the repacks and lost all hope but this post makes me think...
January 5, 2017 at 11:58 PM

Fuji said…
I don't open a lot of Topps flagship, but I'm guessing that's a pretty tough pull. Apply the "retail" filter and it's like hitting the lottery. Congratulations!
January 6, 2017 at 12:18 PM

Stack22 said…
The Vance Law is from Phoenix Municipal, which is now home of the Arizona State Sun Devils (who tragically tore down Packard Stadium on campus).

I went to a ton of Phoenix Firebirds and A's spring training games there as a kid. To this day, the light poles are the same ones from the polo grounds, which the Giants tore down and moved to Phoenix when they relocated from NY to SF.
January 6, 2017 at 12:41 PM

night owl said…
I'll package it with the Strasburg chrome and a couple odds n ends and try to ship it off to you next week.
January 6, 2017 at 3:18 PM