'56 of the Month: Wally Westlake 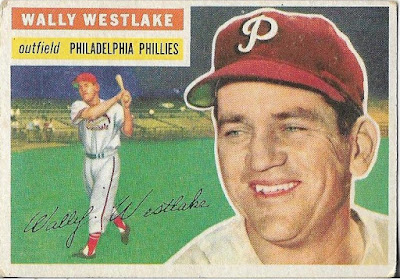 Two things jumped out at me when I first viewed this card sent by Cardboard Catastrophes. One is on the front and one is on the back.

Since we're looking at the front, I'll address that first. The wonderfully alliterative Wally Westlake is wearing a Phillies hat and is indeed listed with the Phillies. He was signed by Philadelphia in November, 1955.

But look closely at the illustrated image of Westlake swinging a bat and what do you see? Yes, you see a man wearing a Cardinals uniform.

Westlake did play for the Cardinals -- he played for a lot of teams -- but that was back in 1951 and 1952, four years prior to this card being issued. Since the '56 Topps cards often feature illustrated versions of black-and-white photographs, I'm wondering why the artist didn't merely sketch in Phillies colors and Phillies notation instead of picturing him with two different teams on the same card (although, I admit that phenomenon is all too rare and quite fun).

Now, let's turn the card over to the back, which isn't nearly as odd, but quite informative. 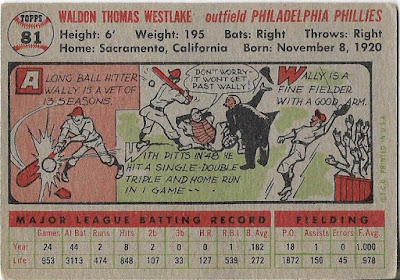 In the middle cartoon, we are told that Westlake "with Pitts in '48 ... hit a single, double, triple and home run in 1 game." That is otherwise known as a "cycle," and the illustrator could have spelled out "Pitts" if he merely wrote "cycle." But then illustrators aren't known for their way with words.

But the interesting part to me is this was only the first time that Westlake hit a cycle in a major league game. He also hit for the cycle in 1949 (the first was against the Dodgers and the second against the Braves, and both times were when he played for the Pirates).

According to Wikipedia, Westlake is one of only three players to hit for cycles in back-to-back seasons. George Sisler and Mickey Cochrane are the other two (there are several showoffs who have hit two cycles in one season, Aaron Hill being the most recent). Westlake is also one of only 29 major leaguers to hit for at least two cycles (John Reilly, Bob Meusel and Adrian Beltre have each cycled three times).

That is certainly some excitement that Westlake executed within his first three seasons in the majors. And Westlake's career was pretty bright his first five years with the Pirates. He drove in more than 80 runs three times and hit in double figures in homers all five years. Branch Rickey liked him so much that he reportedly tried to swindle Westlake for the Dodgers, but the Pirates wouldn't bite.

Then in the middle of Westlake's best season in 1951, Rickey -- now with the Pirates -- traded Westlake to the Cardinals. Westlake admitted to being shook up by the deal and he never hit like he did with Pittsburgh. He became a journeyman, playing for three teams in 1952 and six teams overall during his 10-year career. It makes you think how famous he would have been if he had hit the way he did in Pittsburgh for his entire career.

Westlake, whose final season was his five games with the Phillies in 1956, is now 96 and ranks as one of the 10 oldest living former major league players.

The oldest living major league player is Bobby Doerr at age 98. Doerr also hit for the cycle twice in his career.

So now you know that two cycles per major league career is the secret to a long life.

Commishbob said…
Great baseball card. Nice catch on the odd cartoon wording. I'm too often guilty of overlooking that part of these cards.
January 15, 2017 at 6:11 PM

Jeff said…
Westlake is the 8th oldest former major leaguer, and is oldest living former member of 5 teams - Orioles, Reds, Phillies, Pirates, and Cardinals. He is still a very active through the mail signer. His son-in-law buys 3x5 pictures by the hundreds for him to sign and send out with requests.
January 16, 2017 at 5:16 PM