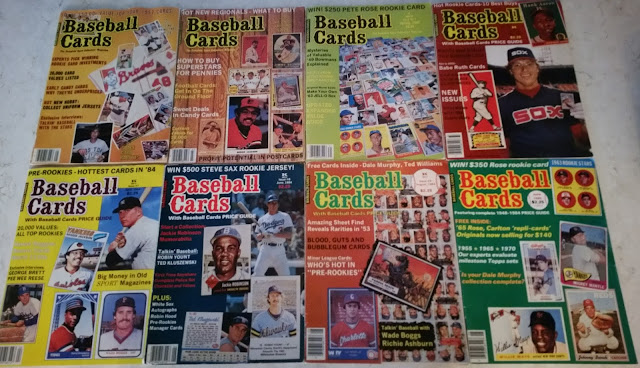 These are the eight Baseball Cards magazines that I either purchased from the CVS downtown where I lived or came to my folks' mailbox via subscription between 1982-85.

Baseball Cards magazine was never finer than during this fledgling period as a Krause Publication. It continued in good form -- long after I had lost interest -- through most of the '80s. Then Beckett took over and that era of good feeling fell apart in a hailstorm of rookie obsession, what's-it-worth and card-grading. And now here we are, blogging because the magazines don't give us what we want.

Anyway, the person behind those exciting early days, that period when I would stalk the magazine rack at the CVS in hopes that a new edition had arrived, was Bob Lemke.

Lemke, a fixture in the hobby since the 1970s, was already a force in collecting publications as an employee at Krause when he started Baseball Cards magazine as a twice-a-year edition in 1981. He was the editor for all of the issues that I bought and became editor and publisher in 1983.

Here is the change on the magazine's masthead: 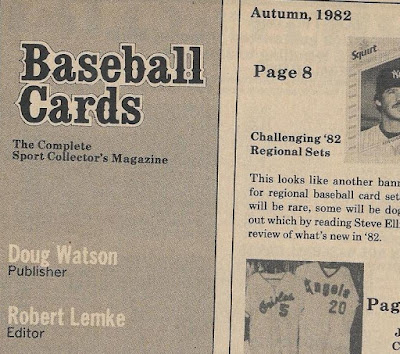 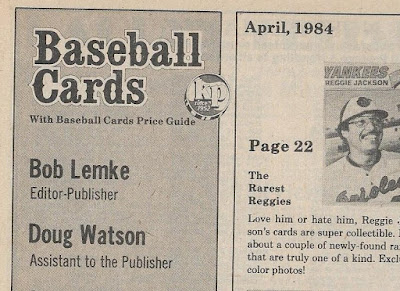 Lemke, who I am assuming had his hand in just about every aspect of this magazine, also wrote articles for it. Every issue you could find a story from Lemke. But even though he was the editor, he never gave himself first billing. His stories would always show up somewhere in the middle of the magazine, no more pronounced than any other story.

Here are some of his articles from those issues that I dug up: 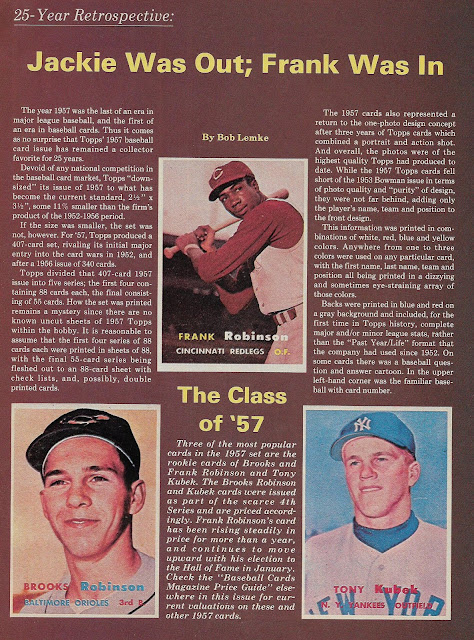 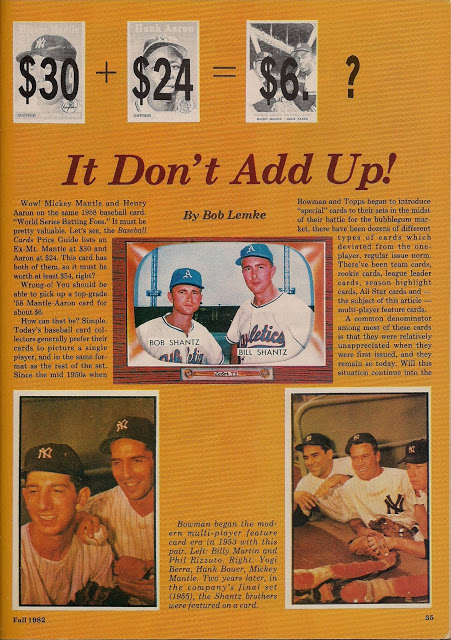 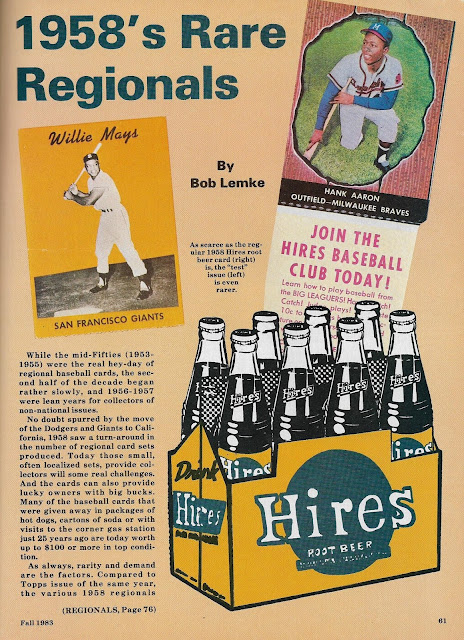 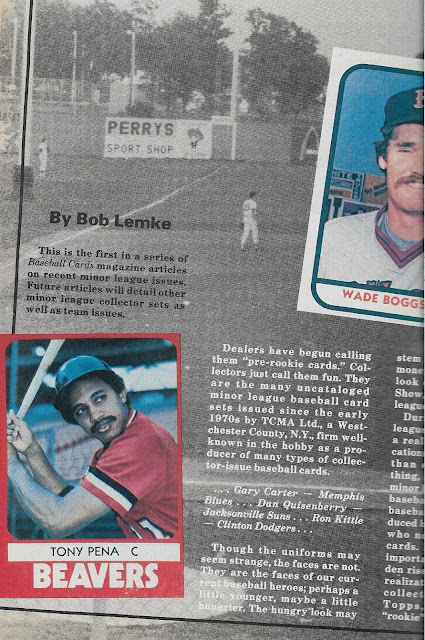 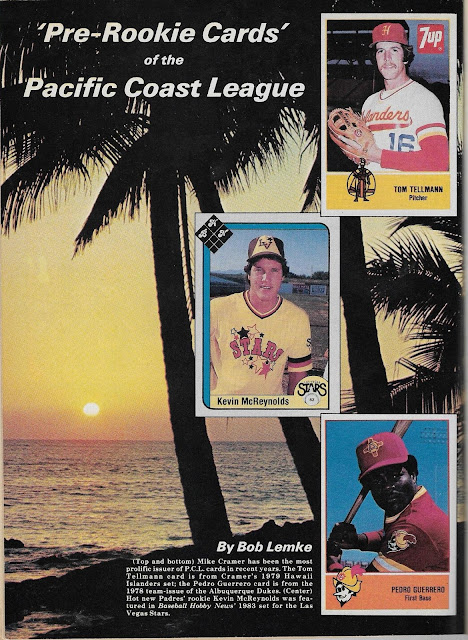 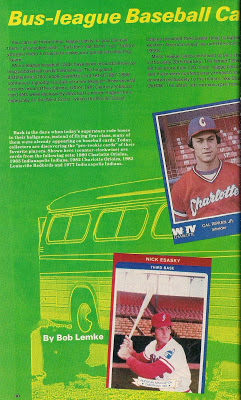 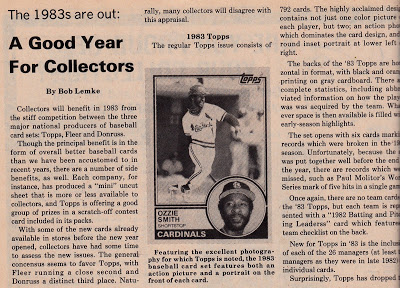 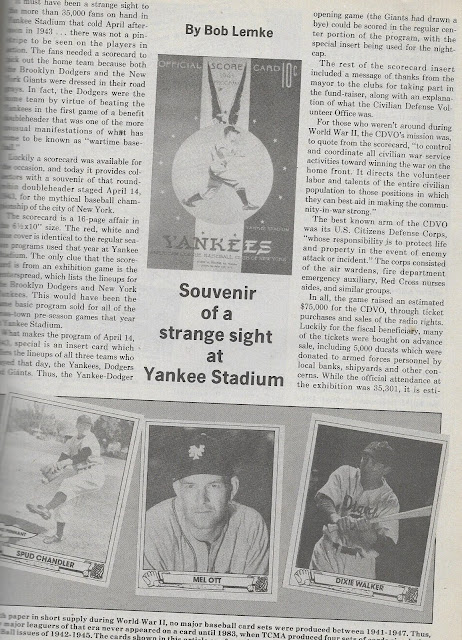 Three of those images are from a three-issue series he did on "pre-rookie cards." At the time, the rookie-card explosion had just begun. But Lemke, with so much knowledge, didn't write about Mattingly, Gwynn and Boggs. He unearthed something that wasn't even considered at the time, TCMA cards of future stars.

I got the feeling, from these magazines and his blog, that Lemke liked the esoteric. He blogged about card issues I never knew, and if you know about the custom cards he made, he enjoyed the "what-if" that is an inherent part of our hobby.

You probably know that Lemke died Tuesday. He wasn't in good health, he said so on his blog. But the news is still crushing. He was probably the No. 1 source of card knowledge for me, and so many other collectors.

Those magazines still mean a great deal to me as I credit them for developing a true love for the hobby in the early 1980s. In fact, I just tweeted this on Sunday, two days before Lemke passed: 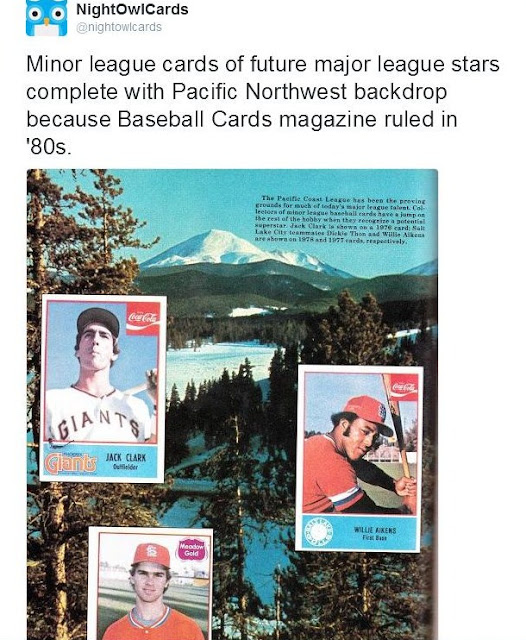 That's a page from Lemke's story on Pacific Coast League minor league issues from the 1980s.

But as important as those magazines were to me then, Lemke's catalog is even more invaluable to me now. 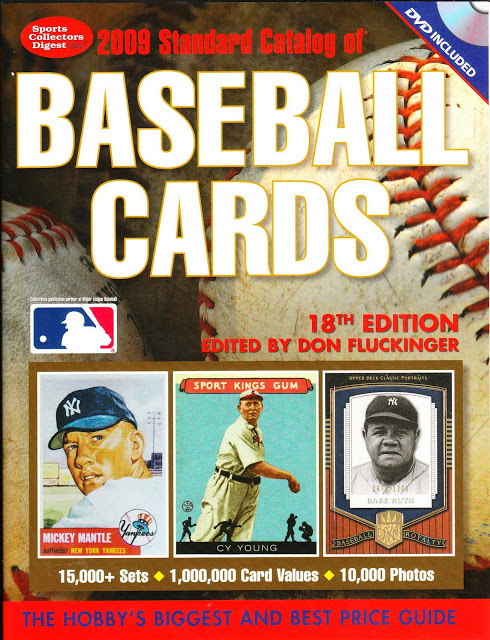 I have referenced the Standard Catalog of Baseball Cards repeatedly on this blog and I have consulted it many more times. Just Monday, I wrote a blog about the 1992 Kellogg's Canadian issue that I had just discovered, and, of course, confirmed its existence by looking through the Standard Catalog.

This was Lemke's baby, too. He created it in the mid-1980s. And he was the book's editor from that point until around 2006 (but he still assisted after that).

I can't tell you how many times this book has helped me. It is the most complete book of the baseball-card-collecting hobby that there is. Here is a link to some of my posts where that book was vital:

The 1992 Kellogg's cards were issued in Corn Flakes in the U.S. and Frosted Flakes in Canada

1963 Statistic Back Exhibit cards actually have statistics on the back!

1961 Golden Press "cards" came in a perforated sheet in books

All of that knowledge about well-known and not-so-well-known sets imparted on this blog was drawn directly from the Standard Catalog of Baseball Cards.

My guess is the majority of the knowledge in that giant, 1,800-plus page book came directly from Lemke, if not all of it.

I never met Lemke and communicated with him only briefly through email about five years ago. I was trying to find the source of a Sandy Koufax postcard-sized issue. And I actually stumped him. (To this day, I don't know the source for that Koufax postcard).

But if I had met Lemke, I would have met a kindred spirit. Lemke was an editor, just like I am. He offered knowledge and obviously enjoyed research, just like I do. He wrote stories, just as I do. And he loved cards and collecting.

I will never have the kind of knowledge that he did. When I think that he was becoming a force in the hobby when he was in his 30s, it blows my mind.

But thanks to him, I have a lot more knowledge about cards than I would have if he never put out those publications. He's been feeding me knowledge since the early 1980s. And he'll probably be feeding me for many more years, long after his departure.

If you've never come across his blog, check it out. You're sure to learn something. And that's the best thing I can say about Bob Lemke. I learned something about cards.

Anonymous said…
I did not know he had passed. He will certainly be missed in the collecting community.
January 4, 2017 at 7:46 PM

Unknown said…
Great post!! Wish I still had those Baseball Card magazines!! That orange cover with war cards was my first issue, picked it up at a card show.
January 4, 2017 at 9:37 PM

Michael Clark said…
I loved that magazine. As much baseball history as it was card history. I used to go to his blog often too ... sorry he has passed ��
January 4, 2017 at 9:50 PM

Zvon said…
OMG, just learning this here. I was just writing about how I thought he was the King of the Cardbacks this afternoon, before I saw this. Awful news. Love his blog. RIP Mr. Lemke :( I would have loved to have had a beer with this guy and picked his brain. He knew so much about the hobby. I could spend hours reading his blog. What a loss :(
January 4, 2017 at 10:11 PM

Anonymous said…
I made some sort of sad noise when I read about Bob Lemke, and my wife thought that a celebrity must have died. I told her that she wouldn't know who he is, but for us, a celebrity *did* pass away. I also have been reading Mr. Lemke's work for 30+ years, and it saddens me tremendously to know his voice has been silenced.

Fuji said…
I remember Lemke's name from those 80's Baseball Cards magazines as well as his blog. Sadly... I never realized they were the same person until I started reading about his passing. Rest in peace, Mr. Lemke. The information you shared with collectors will live on forever in your publications.
January 5, 2017 at 12:02 AM

Commishbob said…
Well said, Greg. I love seeing all those old articles. So much about the hobby has changed yet it still centers on little cardboard squares. And Bob Lemke had a lot to do with all of that. I'll sure miss him.
January 5, 2017 at 7:56 AM

GCA said…
I'd put him up there with Sy Berger and Jefferson Burdick as far as influential people in the hobby.