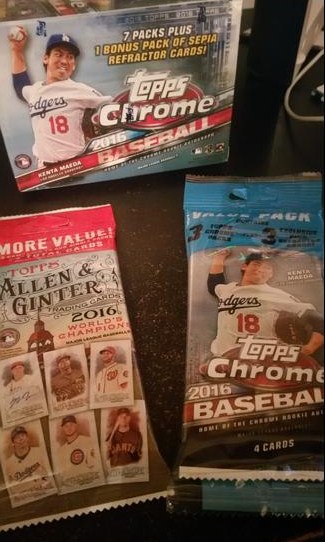 You're all posting your 2017 collecting goals, I'm looking backward. That's pretty typical behavior here at NOC. As you know, I don't make any kind of new year card goals that I record and check off. That kind of goal-setting behavior is for real life. Card collecting gets me away from real life.

One of the best vacations from real life is the week between Christmas and New Year's. I'm not one of those fortunate folks who gets to skip out of work during that time, but there are enough festivities taking place then that it takes the edge off.

Last week, my wife visited her sister and came back with Christmas presents. My presents contained what you see above. I got to open packs on New Year's Eve!

Just in case you don't know what you're looking at, that's a blaster of 2016 Chrome and two hanger packs, one of Chrome and one of Allen & Ginter. My sister-in-law is at it again.

So, that left a bunch of Chrome.

But it's still interesting to open when you get it free! A comment left by Kerry from Cards on Cards on my earlier Chrome post left an impression. Chrome cards are definitely more "substantial" than flagship cards. It feels right buying cards that have more to them. That's usually my reason for preferring Heritage to flagship, but I can see it in Chrome, too. 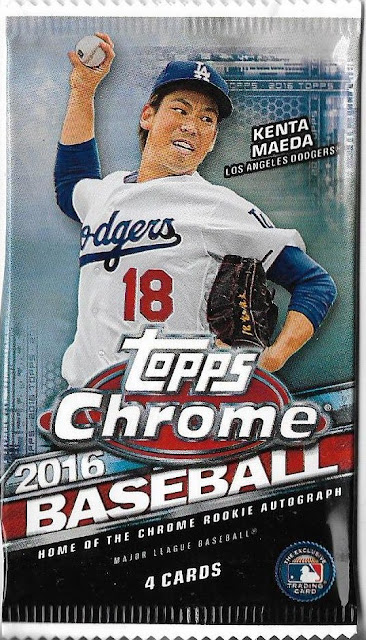 So, let's see the Chrome highlights. 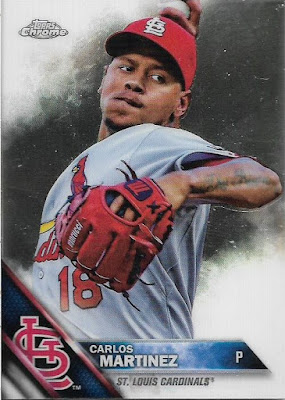 One thing right off that I didn't mention in the other couple of 2016 Chrome posts: There is an obvious outline around the player on this year's cards. It's possible that's been going on for awhile, but I've never noticed it until now. It's difficult to see in scans, but you can see it along the bottom of Martinez's arm.

It kind of gives the effect of a raised image, although it's not. I like it.

Also, this seems silly given how much smoke is apparent on this card, but the smoke effect is not nearly as obvious on the Chrome cards as on flagship. It makes for a more pleasing card. 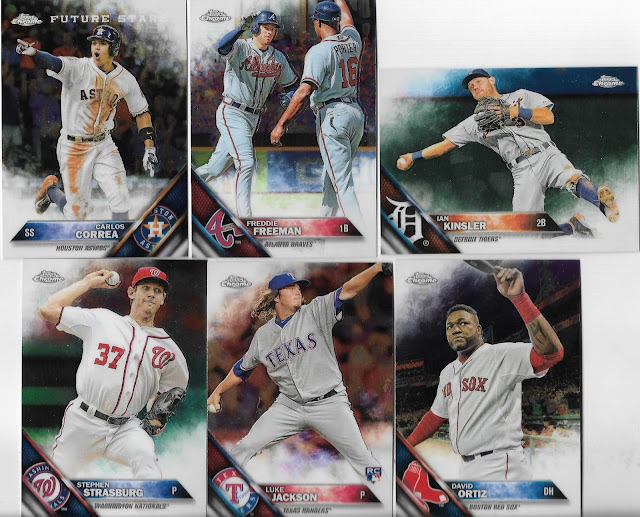 Some of the Chrome highlights. The Strasburg reminds me I pulled a Chrome Strasburg earlier and promised it to Scott Crawford On Cards and it's been sitting on my desk so long that I've pulled another one. I've got to get myself in gear. 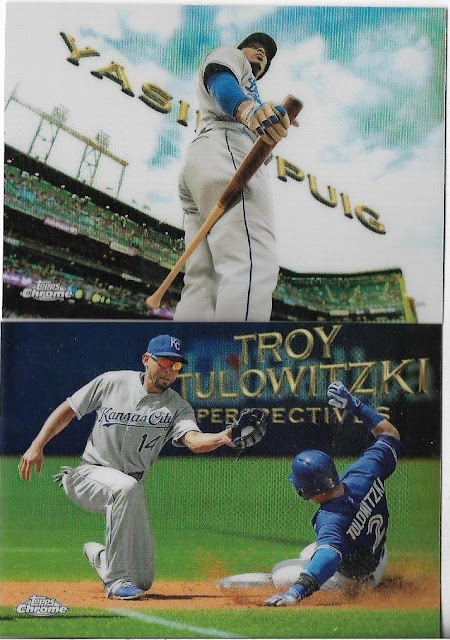 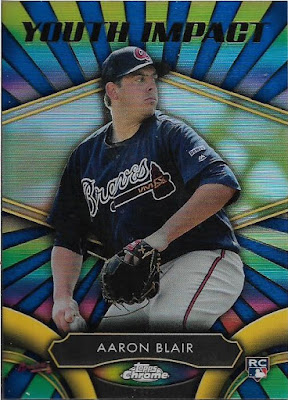 The Youth Impact card. This'll be on its way to one of the two dozen Braves collectors I know. 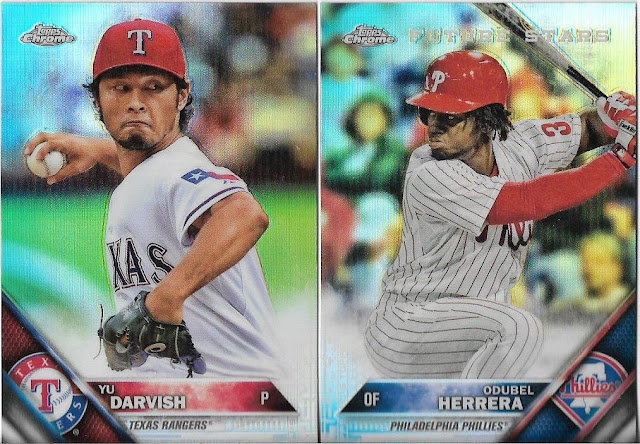 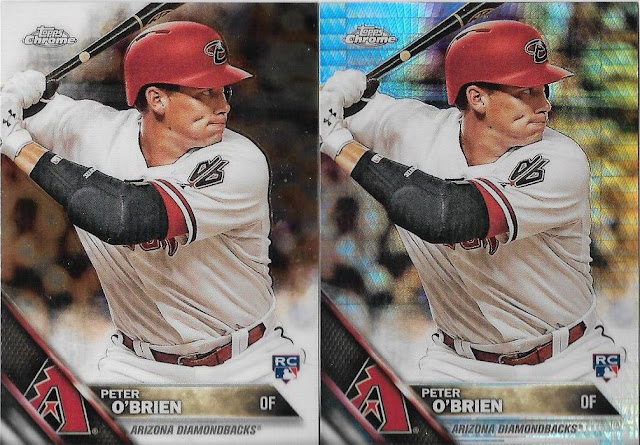 I have pulled abundant Peter O'Brien cards all throughout the 2016 collecting season. Since I do my best to ignore Diamondbacks, I figured this was some up-and-coming star and that's why I kept pulling inserts of him, prism parallels, etc.

Then I read a couple weeks ago that Arizona designated O'Brien for assignment. Holy cow! I'm pulling cards left and right of this Diamondback joker for nothing?! I demand restitution. 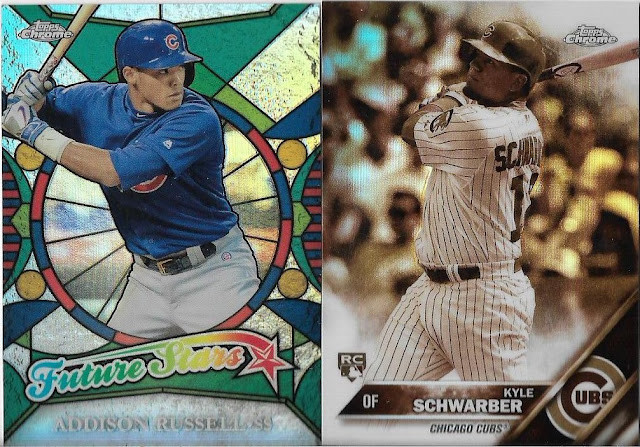 The Cubs probably provided the most star power of pack openings. I'm not a fan of Addison Russell for what he did to the Dodgers, but someone will like that. The Schwarber is from the pack of four sepia parallels that appear in each blaster.

Here are the other sepia parallels I pulled. Not much to say about those.

The hanger packs, of course, have pink parallels. All I can think of with these is how there used to be borders and how fantastic the cards looked with pink borders. 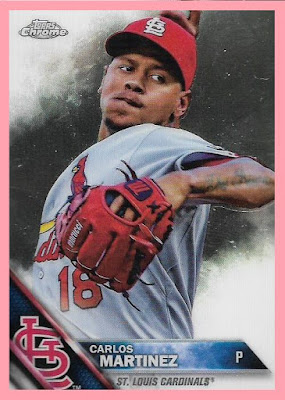 Can't complain about the pinkie trio though.

Since I'm showing cards in threes, here are the other three prism parallel cards. Pretty good luck here, except I don't know who Robert Stephenson is.

As I mentioned earlier, many of these will be headed off to various trade partners. I don't see myself attempting to collect a chrome set ever again, but they certainly still make for nice gifts.

Mike Matson said…
Yeah that Tulo Perspectives card doesn't really have him as a focal point, does it?
Peter O'Brien is now a Royal, being traded for a minor league pitcher.
January 3, 2017 at 8:48 PM

Daniel Wilson said…
Always great to get cards for Christmas, at any time. You and me both are disappointed in Peter O'Brien. He is a home run or strike out player, with an emphasis on the strikeouts. But boy when he hit the ball it went far. He is better suited as a DH.
January 3, 2017 at 9:25 PM

Fuji said…
Busting packs on New Year's Eve is one helluva way to end the year. Hearing about Bob Lemke's passing is a crappy way to start the new year.
January 4, 2017 at 12:21 AM

Twitch said…
Unless it's an all-time great looking set, Chrome is almost always better. Love that sepia Schwarber.
January 4, 2017 at 1:32 AM

BobWalkthePlank said…
Stephenson was a 1st round pick in 2011 out of high school. You should just hold onto that one until he is dfa'd and picked up by the Royals as well.
January 4, 2017 at 9:07 AM

Trevor P said…
Thank you for pointing out to me what was wrong with that Tulo card. I got it a few weeks ago and hadn't been able to figure out why I didn't like it. Then all you have to say is, "It's Omar Infante," and I realize that my brain hadn't been able to clarify the subject of the card. Stupid brain. And stupid Topps.
January 4, 2017 at 10:29 AM

Big Tone said…
Congrats on the New Years score!You've got a couple of nice cards In Russel and Schwarber.
January 4, 2017 at 11:01 AM