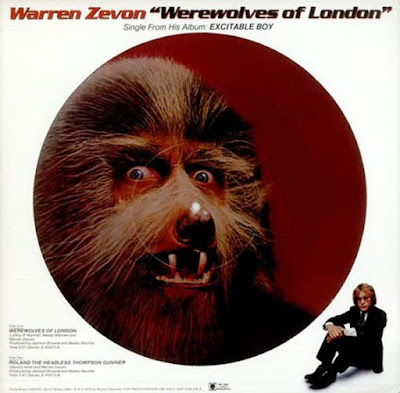 If you know anything about pop music from 1978, you know it was the year of two major soundtracks, Saturday Night Fever and Grease.

The songs from those two albums dominated the charts all year and it was all a radio-listener ever heard. But beneath that disco-coated surface were some real gems. The year '78 is one of my favorites for rock n' roll/new wave music, many familiar songs that never made the charts. And it's also the year for crazy one-hit wonders that actually, wow, really did make the charts.

Warren Zevon's "Werewolves of London" made the top 30 (pop audiences could handle only "Zevon lite"). Randy Newman's "Short People" and Steve Martin's "King Tut" were huge hits. Johnny Paycheck sang "Take This Job and Shove It" and it became a Top 40 one-hit wonder.

Add the still-booming disco scene and there were one-hit wonders from Samantha Sang (Emotion), Love & Kisses (Thank God It's Friday) and Alicia Bridges (I Love the Nightlife). Then there is the one-hit wonder that has escaped itunes -- I know because I check like every month -- Chris Rea's "Fool (If You Think It's Over)".

It seems that '78 had more one-hit wonders than your average year, although taking a quick tour through various places that track such activity, that's definitely not the case.

But how about 1978 baseball cards? Were there more one-card wonders in '78 than in other recent years?

I'm in the process of finding out.

As you know, the One-Card Wonder series determines which players had one card, and one card only, in a major trading card set. The player didn't appear anywhere else, not on a multi-player rookie card or anywhere (minor league cards are excluded).

In 1978, Topps bumped its card set up from 660 cards to 726 cards. That seems like an invitation to add more fly-by-night ... er, one-card wonders to the checklist.

I haven't researched the one-card wonders for 1977, so we'll have to wait awhile to see if there's a leap in OCWs between '77 and '78, but here are the players from the 1978 set that have one card only: 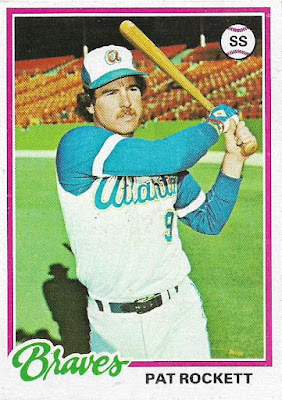 This post was spurred on by Pat Rockett's recent 62nd birthday. He has one of the greatest baseball names from the '70s. It's an honor to place him in the One-Card Wonder list. 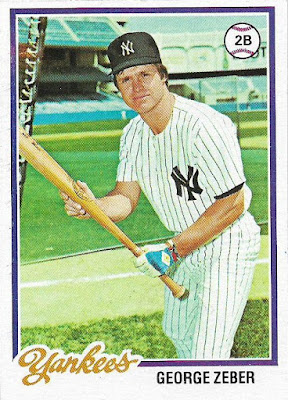 George Zeber has a card in the 1978 SSPC team-issue set that appeared in the Yankee yearbook that year. But I'm throwing that set in with minor league cards. Zeber is a One-Card Wonder to me.

I did exclude two other players who received just one Topps card: 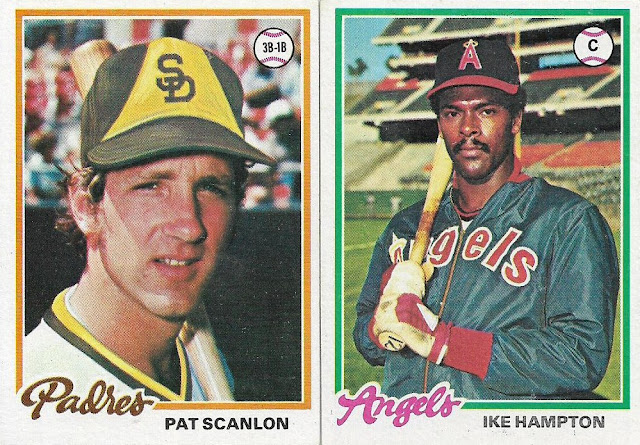 Pat Scanlon and Ike Hampton each appear in the 1976 SSPC set. Since that set includes just about every player in the majors from 1975, I consider that a major set. You could make a case for Hampton being a OCW because he appears as a minor-leaguer in the SSPC, as a Tidwater Tide, but I'm leaving him out.

As for the number of 1978 One-Card Wonders, 10 is definitely a bump up from other sets that I've already researched. The '74 set has just seven OCWs and the '75 set has six.


I'll probably research 1977 or 1979 next to get a handle on any increase. Then I really have to start tracking some OCWs for one of the other card company brands.

Brett Alan said…
Coincidentally, another blog on your blog roll has a post today saying that Steve Staggs of the Blue Jays was a one card wonder in 78. http://collatingcards.blogspot.sg/2017/01/countdown-to-2017-topps-21-most.html

"Fool (If You Think It's Over)" is a great record. I can probably email you an mp3 if you want. One year I did an April Fool's Day thing on the radio where I told a phony story of Chris Rea quitting the music business because he won a Nobel Prize or something.
January 11, 2017 at 10:23 PM

Anonymous said…
Fish Heads might not have been a Top 40 hit, but I'm sure it was in the Doctor Demento "Funny Five" for weeks on end. They can't play baseball, they don't wear sweaters, they're not good dancers, they don't play drums.

I find it completely amazing that *anybody* could've been a one-card wonder in the 1990's.

CaptKirk42 said…
Yes Fish Heads was often #1 on the Funny Five. I think it might have even been #1 for the year. BTW in case you have forgotten or never knew it in the first place one half of Barnes & Barnes is Bill Mumy AKA Will Robinson in Lost in Space.

As far as Werewolves of London is concerned back when the album was released one of the local rock stations had a special promotional event for the release at a local record store (that I lived less than a mile away from at the time). They had a "Werewolf Howling" contest. I didn't enter but my older brother and his friend entered. Neither won the contest but each person who entered received a copy of the "Excitable Boy" album.

Coast To Posts said…
Saw the werewolf I thought this was going to be an introductory post featuring the track 'Clap For The Wolfman' by the Guess Who released in 1974. How do you feel about that song?
January 12, 2017 at 5:58 AM

Jamie Meyers said…
Any post which mentions Warren Zevon is a good one. He is, by definition, a one-hit wonder, but recorded a dozen albums and is widely considered to be one of his generations better songwriters. "Werewolves" was kind of a novelty song but it did get him a lot of exposure and airplay. Ironically, a good number of my favorite all-time singer/songwriters would be considered one0hit wonders and many of them had their hit around that time. Many of them recorded tons of great music that was appreciated by not that many people. Kind of like a George Zeber card?
January 12, 2017 at 6:54 AM

Kevin said…
Check some of the Donruss sets from the mid 80s, they seemed to have more players that didnt appear in other sets...I have found Fleer sets to be completely redundant, in fact the 1984 set outside of The last cards of Bench, Yastrzemski and John Stearns has all players that show up in other sets.
January 18, 2017 at 10:30 PM