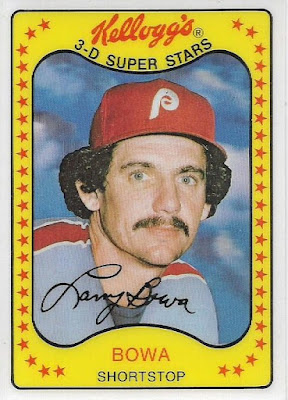 Did you practically jump when you saw this image on your blog roll? I did when I first pulled the card out of a PWE from Dime Box Nick.

It wasn't just the '70s white man's afro, or the wispy stache, or Larry Bowa staring unblinkingly back at me. It was that this card broke a pattern.

Once you've been collecting for awhile, you get to know cards so well that various sets follow patterns that become familiar to you. The dugout shots in 1981 Topps. The wacky cropping in 1982 Fleer. The distant players in 2004 Topps. The patterns become ingrained in your brain and you don't even think about them anymore. It's just a basic truth: There are a crap-load of players with no hats in 1970 Topps.

Kellogg's 3-D cards' basic truth is that images are torso shots. Batters posed in a stance or placed a bat on their shoulder. Pitchers propped a glove in front of their chest or faked a throw. Sometimes you saw a leg or two because another common pose was kneeling on one leg with bat leaned against it.

Card after Kellogg's card looks like this. The pattern lulled me into complacency.

And then I pulled that Kellogg's card of Larry Bowa's big head. AHHHHHHHH!!!!

Nick sent me a few other bright yellows: 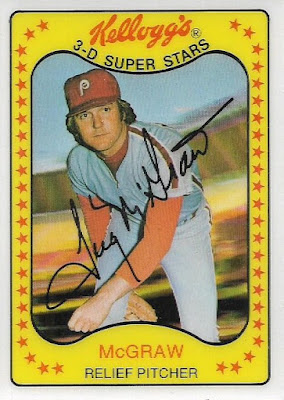 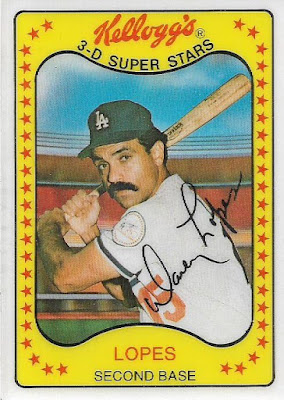 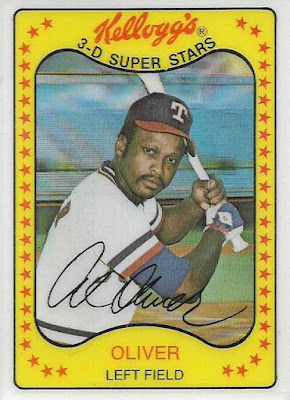 Tug, Davey and Al kept a proper distance, unlike Larry.

The majority of the PWE contained oddball cards, which is definitely a preference, particularly when it comes to '70s cards. 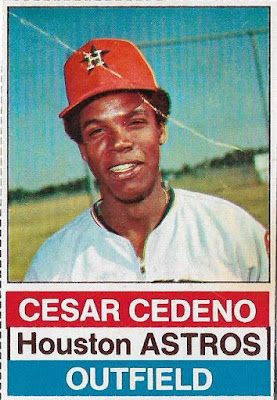 Here is an oddball from a set I am collecting (expect to see a want list for 1976 Hostess sometime this year). Cesar Cedeno doesn't appear to be bothered in the least by the crease mark crossing his cranium. And neither am I. 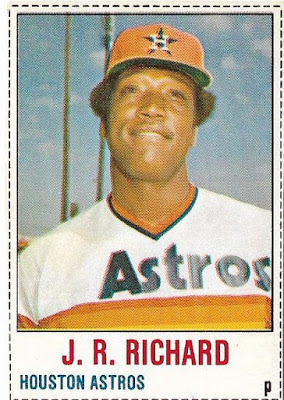 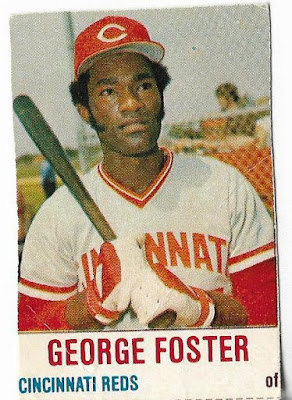 Whatever the kid was trying to accomplish here didn't work out. My guess is he was feverishly attempting a full bleed card years before Stadium Club arrived and things went haywire. 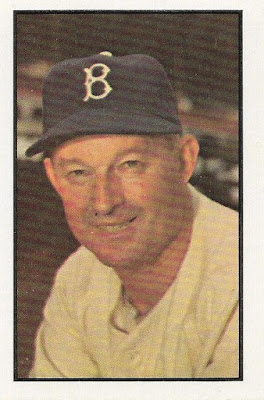 This is not from the '70s (nor the '50s). It's from a reprint set from 1983, commemorating the 30th anniversary of 1953 Bowman Color. I happen to have the actual '53 Bowman Charlie Dressen, so the thrill is gone here, but nice to see it in a slightly smaller size. 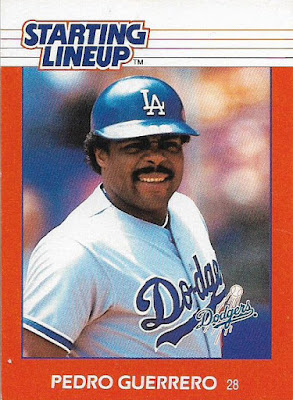 One of my favorite oddballs from the 1980s. As you know, Starting Lineup cards aren't the easiest to track. It took me awhile to discover that. But I'm very happy now whenever one shows up at my door. This one is from 1988, Guerrero's final year with the Dodgers. 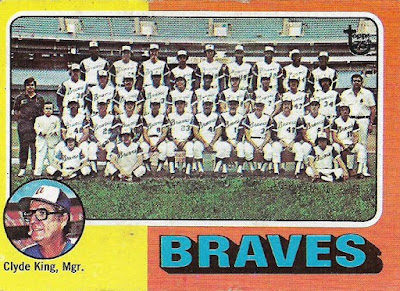 Woooooooo! Another 1975 buyback! The back of this card is unchecked, meaning it's a shame they stamped this sucker. It's best it stays with someone like me, who has already completed the '75 set. 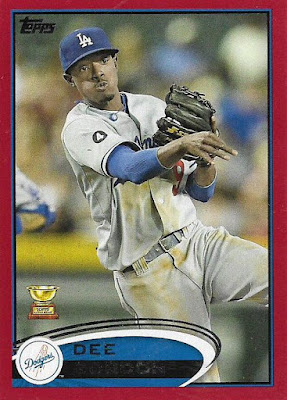 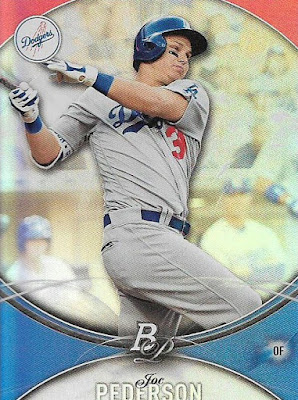 Here a couple of modern-card needs that don't really fit with the rest of this post, but I must show cards gifted to me, even if the scanner cropped off the bottom of the Pederson card.

Tony Burbs said…
'81 Kelloggs is by far my favorite of the cereal sets, mostly because I'm not a huge fan of mini cards. Standard is certainly my preferred dimensions. Nice stuff, as always, by Nick.
January 17, 2017 at 8:12 PM

Johnnys Trading Spot said…
I'm with you, collecting all the Kelloggs and Hostess, good stuff then and good stuff now.
January 17, 2017 at 9:25 PM

Commishbob said…
I don't remember buying boxes of Hostess products for the cards, I got mine out of oddball boxes at shows. But Kelloggs? Let's just say I ate a LOT of cereal back then. I was single, worked crazy hours and never, ever cooked. Fun cards!
January 18, 2017 at 8:42 AM