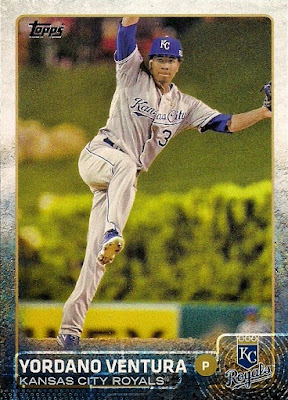 I haven't done much with my Awesome Night Card series the last two months. It's not easy spinning a post off of a single card. And while I get inspired periodically to produce something meatier than "hey check out this night card!", it usually doesn't get much play because I'm guessing the readership thinks, "oh, here's just another night card again."

So I've moved on and nobody seems to mind.

But it's taken something awful for me to return to why I do these things in the first place.

As you likely know, Royals flamethrower Yordano Ventura was killed in auto accident Saturday night in his native Dominican Republic. He was 25. This is happening far too often.

Ventura was a controversial figure in baseball. He was animated, some would say combatant, and not afraid to provoke. Sure, he could be considered over the top, but basically, he was my kind of player.

Ventura had style. His pitching motion ended with a high, swinging leg kick. He probably took his bravado too far, provoking in certain situations, although in some cases if he was ignored we wouldn't have the on-field fights we do. But everyone has to pay attention to every little "slight" today.

It's a fact that Ventura's talent helped the Royals win a World Series. He had many fans in K.C. and his native country. They liked his energy. He was one of those beloved people who could draw people to him. It's those kinds of people who can achieve great things.

It's also a fact that Ventura's style made great baseball cards. The above card is one of my favorites of all of 2015. If Stadium Club hadn't been around that year (Ventura has another nice card in that set), I would have been tempted to crown it card of the year.

Strangely, I never dedicated an Awesome Night Card post to it although I have shown the card at least four separate times and praised it just about every time.

So, now, it's an Awesome Night Card, headed to the night card binder. 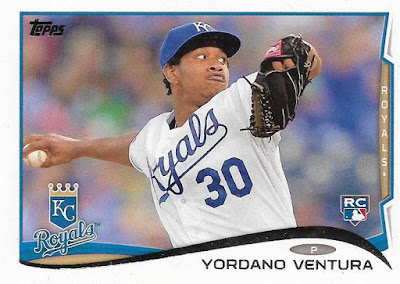 And so is this card, as miscut as it is.

I don't know the details of Ventura's accident, other than to look up the rate of auto accidents in the Dominican Republic, which is alarming (former player Andy Marte also died in an auto accident the very same day). I hope I'm wrong, but there seems to be an even greater sense of immortality among the young these days. More and more youngsters think they're a superstar. Live fast, die young. As much as I admired Ventura's swagger, the ego is a double-edged sword.

The online community has flipped out about the rate of deaths of celebrities in the last year or so. I can't help but notice that if famous people would take care of themselves a little better, famous people wouldn't be dropping on us as quickly. (Same goes for non-famous people).

We need a few more Tom Hanks. Or at least pay attention more often to the Tom Hanks.

Living slow and dying old is cool, too.

AdamE said…
Everything I have seen about him away from the field says he was a great kid. I didn't see him as having a big ego, I just saw competitiveness on the field. (and maybe some little man syndrome)

Dave said…
What took me back was Ventura was one of the first to honor the death of Oscar Taveras, who also died of an auto accident in the DR. I remember Ventura in Game 6 of the 2014 World Series pitching with "RIP OT 18" on his cap.
January 23, 2017 at 4:43 PM

Jamie Meyers said…
I met Ventura after a Wilmington Blue Rocks game in 2012. He was pretty friendly. It appears as though he lost control of his car while driving through a thick fog. While I've never been to the D.R., I have been to other Latin American nations and can easily picture some twisty, difficult to navigate road in poor visibility. Relatively lots of people die in similar mishaps down there.
January 23, 2017 at 5:59 PM