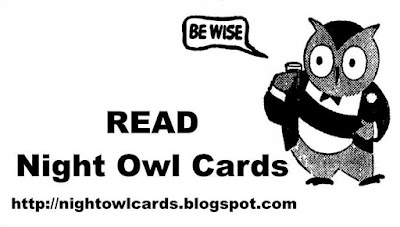 This tastefully appropriate advertisement for the blog you are currently reading will soon reside on my sidebar. I keep thinking that my blog layout needs a rejigger and something like this should be the kick in the pants that I need. But I doubt I'll do anything.

The owlie ad was created by Mark of Mark's Ephemera. He is after some of my 1971 Topps. Seeing that I have a few extras, and now a feathered friend in a cummerbund touting the virtues of reading Night Owl Cards, I am more than happy to ship some off.

You may be surprised to learn that I don't believe I am all that wise most of the time. Often I'm berating myself for being a stupid owl. So a logo like this will keep the pressure on to come up with only the wisest of musings.

I happen to have probably the wisest musing that I've ever placed on this blog right here, right now. 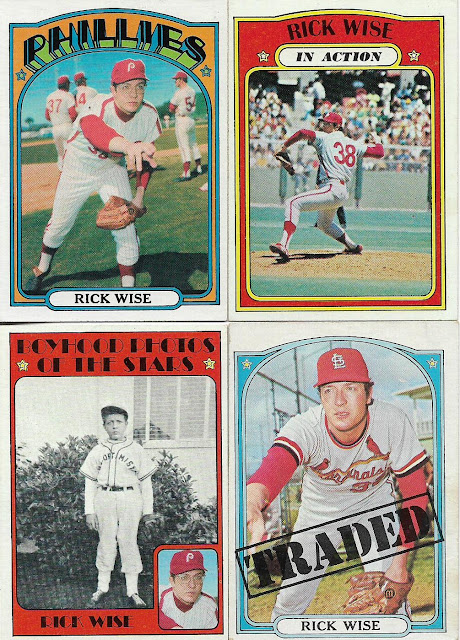 Rick Wise has not one, not two, not three, but four cards in the 1972 Topps set. To my knowledge, he has the most solo cards (we're not including 3-player league leader cards here) of any player in the 1972 Topps set. More cards than Aaron, Mays, Clemente, Seaver or Bench. You could make the case for Brooks Robinson and Manny Sanguillen each appearing on four cards, too, as they each show on multiple World Series cards. But only Wise was wise enough to have his name on four cards.

This is 1972, mind you, not 2016, with a bloated traded set and more inserts than anyone would ever want. Yep, that Rick was a Wise bird.

If you thought this was all silly, then you probably stopped at the image at the top and are currently frothing at the mouth as you type an angry email to your congressman.

Perhaps I'll join you, because sometimes that wise old owl, he's an idiot.

Jamie Meyers said…
I like those Wise cards. I didn't realize he was in the set that many times. I have the Boyhood Photos card, which I pulled from a pack as a 7 year old, signed. Rick may have been Wise but he could be a bit grumpy. Now that I'm about as old as he was when I met him, I get it.

The owl logo is very vintage-y, perfect for you. I have a signed photo of Boo Ferriss pitching at Fenway circa 1946 with an almost identical looking owl on the Green Monster. They had ads on it back then. I have no idea what the ad was for and a quick Google search doesn't help.
January 25, 2017 at 8:32 PM

BobWalkthePlank said…
I just picture your wife looking at you cautiously as you keep saying "stupid owl."
January 26, 2017 at 8:00 AM

Commishbob said…
Was expecting a post about one of my favorite TV shows ever.

Didn't know until I just poked around his BR page...Wise led the NL in fielding five times. Granted Fielding % is a sort of bogus stat but it still indicated some impressive work.
January 26, 2017 at 12:26 PM