No room for Jello 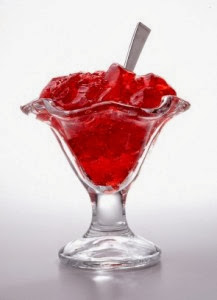 I was intrigued by garveyceyrusselllopes' post this morning on early 1960s Jello cards because like many collectors I've never been able to tell the difference between Jello cards and the Post cards that came out at the same time.

Oh, sure, there are lots of places you can go where they'll tell you how to figure out the difference, but that means actually having to reeeeaadd something that isn't a card blog and I'm so laaaaaaaaazy.

So even though I have the information right in the next room in the form of the Standard Catalog of Baseball Cards, I just kept right on going, "maybe I have a Post card, maybe I have a Jello card, oh, well, I guess I'll never know, la di dah!"

I'm glad someone finally put a stop to that. Jim's blog post referenced Wrigley Wax's blog post from a couple of months ago that had information on how to tell the difference. 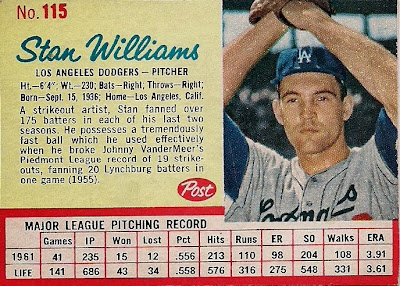 By the way, this Stan Williams card was sent to me by Commish Bob, of The Five Tool Collector, recently. I sure do appreciate it.

But in 1963, Post dropped its logo, who knows why, and '63 Post and Jello cards look essentially the same. So I went right to the few 1963 Post/Jello cards that I have to determine with this new-found information whether I have a Post or Jello card. 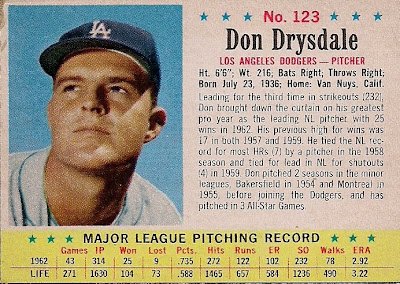 So, looking at the Drysdale card, I can definitely say that it's a Post card. 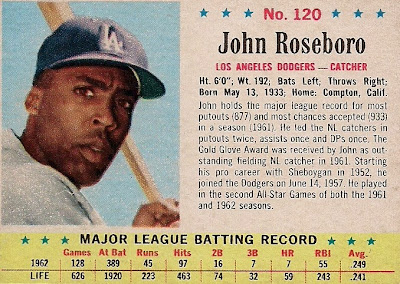 Here is Drysdale's batterymate, John Roseboro. Look at that red line practically travel off the cardboard. Yep, that's a Post card, too. 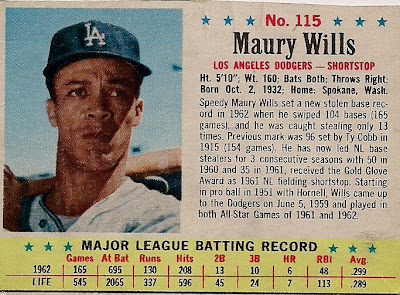 Final try. Here is the star of the 1962 season, Maury Wills (yet there is no column for stolen bases). The red line is taking a large lead off a first base there, which leads me to believe that this is also a Post card.

And there's no room for Jello in my collection.

Someday I'll seek out some of those Jello cards, especially since I know what to look for now. After actually opening my Standard Catalog to the 1963 Jello section and actually reading it, it's interesting to note that some of the cards are scarce because they were printed on the back of less popular brands and sizes of Jello.

This fascinates me. What were the less popular brands? I'm saying one is tapioca. Tapioca is one of those foods that seemed to be popular only before I was born. I don't even know what it is. So I'm saying -- without doing a stitch of research -- that those rare cards were on the back of tapioca boxes.

But if anyone wants to enlighten me, I'll be all ears. I love that kind of information. 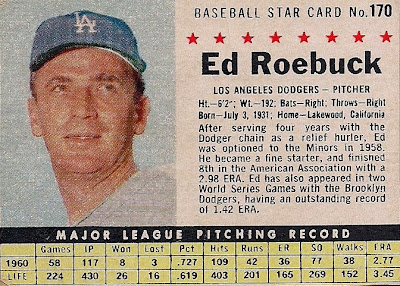 One more card from the Commish: 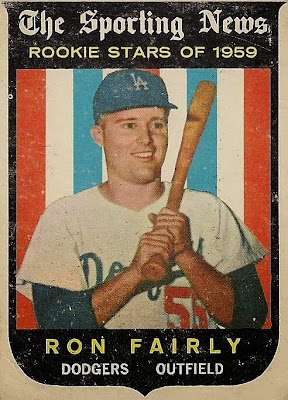 Awesome. A real live rookie 1959 Topps Ron Fairly from the proprietor of the '59 Topps blog.

And best of all, I don't have to do any work to figure out exactly what it is.

Sorry, my researching is done for the day.

defgav said…
It's amazing none of those "Rookie Stars of 1959" went on to actually be stars. Such a cool design for those cards and not a "hit" among them.

Too bad Jello doesn't do cards anymore. I got a box of Jello just yesterday on the sidewalk out of a "free" bag while walking the dog. I left the canned goods for the hobos, but I figured they probably couldn't use the Jello since you need a stove/microwave and a fridge to make it.
January 14, 2014 at 7:52 PM

madding said…
I think tapioca gained a second life by being used in bubble tea -- the weird globby "pearls" that barely fit through your straw and seem like they might be a good choking hazard. Otherwise, I don't know where you'd go to find something common with tapioca in it. Maybe some weird candy?
January 14, 2014 at 8:24 PM

Unknown said…
Thank you SOOOO much for telling us how to differentiate between the Jello and Post origins for 1963.

I have a Jim Landis and Ron Fairly, Jello...small part of the card with the flavor still on the card...both Black Raspberry, Regular size. Therefore I can verify that my cards known to be Jello have the shorter line. Have no idea why I left the flavor on. I was in the 3rd grade in 62-63 school year. All the others I was pretty careful to leave the black lines.

Big names I have:

1962 (Several - all marked Post)
I have a question regarding border color around stats - Post appeared to have diff colors for diff range of numbers. Why? Answer is likely "just because" . I don't have any Jello for that year, so I don't know if the color was determined by Post or Jello:

Collected all these in Omaha, NE