Amid all of the innovation and mass quantities of sets was some really weird stuff. I wish I had never witnessed the fashion shoots that were disguised as draft pick cards in the early '90s. And the cards where players are parading around with their shirts off? Please, find the person who thought that up and fire them. And if they've already been fired, fire them from their current job.

Although the '90s could produce such fantastic out-of-context cards like this, for the most part I don't really want to see my baseball players in cowboy hats or fishing or barbecuing. I want to see them baseballing.

But the '90s really wanted you to see the athletes doing things other than why you were collecting their cards. They wanted you to get to know them. What are their interests, their talents? Who are their family members? Where do they like to hang out? Do you want a map to their home? Would you like to stalk their children at school?

And we wonder why athletes have to walk around with security now. I blame the '90s.

Here is another example: 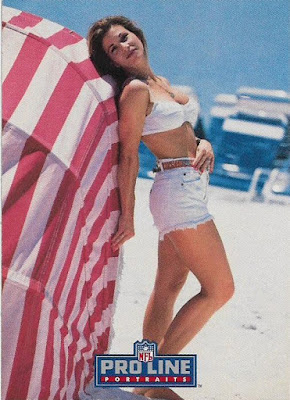 In the early '90s, Pro Line thought it was a good idea to produce a small subset that included players' wives, and call them "Pro Line Portraits" or "Pro Line Spirit." This card is from 1993.

This is Cindy/Cyndi Reed (the spelling varies depending on the source), who is the wife of former Bills Hall of Fame receiver Andre Reed. 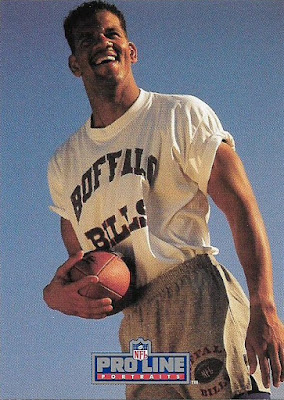 There is Andre right now.

Although I like my pretty women on cards, this just seems weirdly inappropriate -- which I guess could describe a large segment of '90s cards in general.

Take a look at the backs of each card: 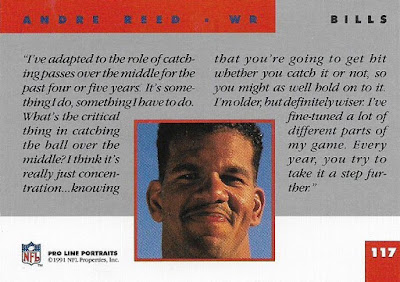 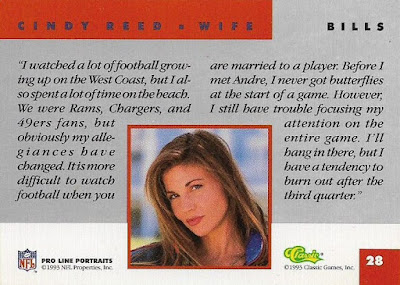 Also, it's good to know this about Cindy: "I still have trouble focusing my attention on the entire game. I'll hang in there, but I have a tendency to burn out after the third quarter."

Probably not something you want people who collect football cards to know.

Fuji said…
I opened a bunch of these packs back in the early 90's in hopes of pulling autographs. Oh... and I remember thinking Bernie Koser's wife was cute.
November 4, 2015 at 10:34 PM

capewood said…
Back in the 90s someone gave me a pack of Hooter's cards, from the restaurant. I found Mrs. Darrin Daultin in the pack
November 4, 2015 at 10:55 PM

BobWalkthePlank said…
If my very first autograph was a "wife" auto I would have quit collecting and started playing marbles or something.
November 5, 2015 at 7:48 AM

Commishbob said…
Put this set together pack by pack back in the day. It's still in a binder as are the other Pro set issued sets.

I always thought Joe Montana's wife was the star of this show but the more I see of Mrs. Reed the more I'm tempted to re-evaluate.
November 5, 2015 at 7:59 AM