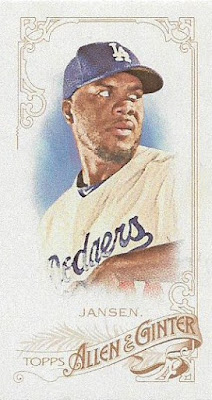 Here is another saying that I never understood: "everything from soup to nuts." For years I had no idea where that originated. Why were soup and nuts polar opposites? Was nuts the hardest thing you could eat and soup the softest? I was reaching, but what else could it be? What a weird saying.

So I finally looked it up. It turns out it comes from what was considered a full course meal back in the day. You eat soup at the start of the meal, you eat some sort of nutty dessert at the end of the meal. Soup to nuts and everything in between.

So there you are. That wasn't nearly as interesting as I thought it would be.

But it does sum up a tidy package of cards I received from Robert and his blog $30 a Week Habit. Robert has recently moved and is now throwing 20s and 10s around in sunny warm climes while I've officially started hunkering.

I received a package that basically spanned the breadth of my collecting choices -- from the oldest item I'm focusing on to the newest.

But since the oldest stuff is always more interesting, I'll start with the newest. I'll call this "nuts to soup." 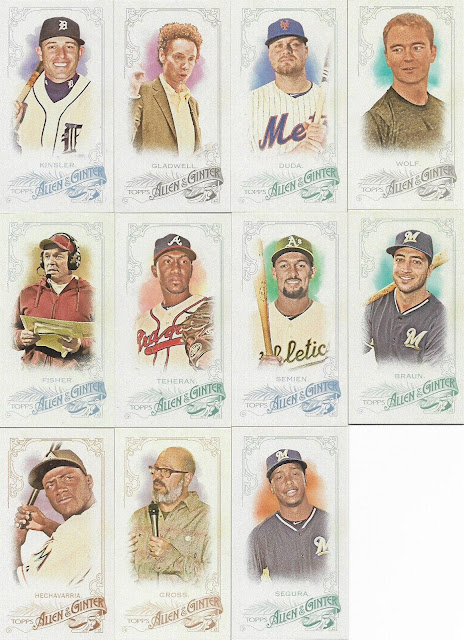 Robert sent a healthy stack of 2015 A&G minis, which I will always adore. However the ones you see here did not make my frankenset binder. Many will probably find other homes. The others will just cry in a box somewhere. 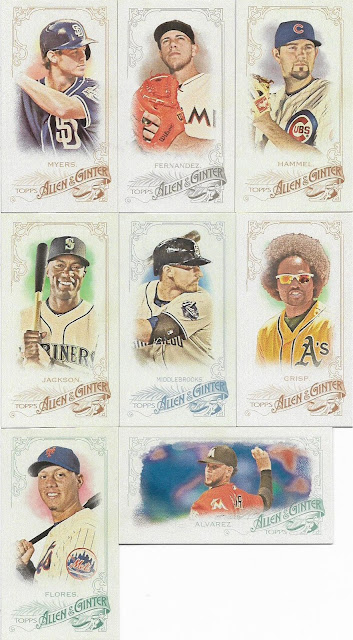 These 2015 minis do make the binder. Yay! Very happy to have the Coco Crisp as part of the frankenset club. 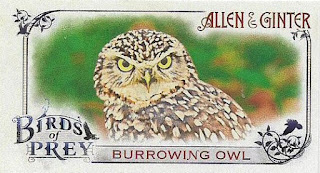 Robert also sent one of the super-fine owlie cards in this year's A&G. He said he didn't know whether I had it already but figured he better sent it.

This is excellent decision-making. When in doubt about sending an owl card, always send.

It turns out this is the third version of this card I have, while I have none of the other two. But that's a small matter that I shouldn't have even mentioned. The key part is sending owl cards. 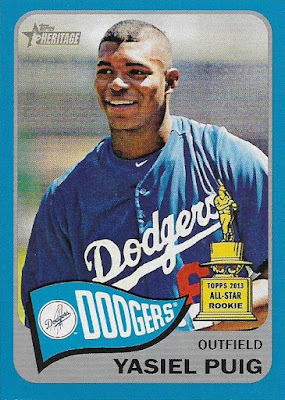 Heading all the way back to 2014 and one of the many necessary cards that escaped me last year. This blue-bordered Heritage card shows the pariah of the old-school baseball world Yasiel Puig. These days people are babbling about which Dodgers players wanted Puig traded. DISSENSION! INTRIGUE! CONFLICT! DRAMA!

Let me clue you in on a little secret here:

There are players on every team in the major leagues, and have been since the dawn of professional baseball, who don't like each other.

It doesn't keep anyone from winning a World Series. Ever.

You know what keeps teams from winning a World Series? Lack of talent and production.

Not whether one player sends a smiley face text to the other and the other one sends one back.

So, any reference to this kind of crap -- team harmony, team spirit, in other words, high school garbage that should be left in high school -- is pointless drivel, generated by talk shows, social media or certain segments of traditional media so desperate for revenue that they cater to people who feed off of gossip. In other words, if fans were more intelligent, we'd never hear about this. 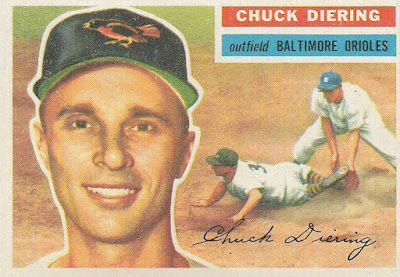 Robert sent me two cards for the 1956 collecting quest. This is the earliest card item that I am actively trying to collect. This is the soup. 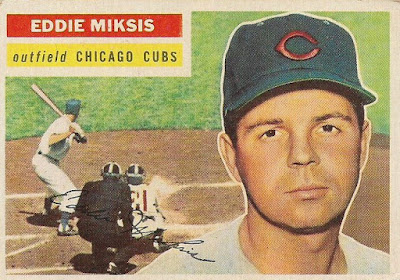 Two especially fine specimens here. Both players were known for their terrific fielding skills in the outfield. Not only are these soup, but the best soup possible. Like soup with meatballs in it.

So, thanks Robert, for spanning the length of my collection.

And for helping me learn about a common American saying.

Next up, why the hell everybody says they offer everything but they somehow can't fit in the kitchen sink.

Unknown said…
Those are some fine specimens of 1956 cards you got, good soup always makes the soul feel a little better I always say.
November 24, 2015 at 7:49 AM

Robert said…
Glad they arrived safely, next time I will have to look at the frankenset list (if there is one) before sending minis.

2 bloggers blogging about packages they sent each other on the very same day? Serendipity? ESP? Kismet?

By the way, I'm sure that there will be more fine '56 specimens heading your way; this dealer I frequent at the monthly show has some pretty nice stuff at good prices...
November 24, 2015 at 8:10 PM

AthleticGigantes said…
I agree with the "team harmony" comments in professional sports. The A's teams from the early 1970's are a fine example on this topic. I deal with this topic at work every day as it is impossible to like everyone I work with but I have to keep things professional and produce results.

High school team sports is helping my son deal with is very same issue on his baseball team. He does not like the majority of his teammates, including not caring for his coaches style and technique. However, his best sport is baseball and he'll continue playing in spite of these obsticles and it will help him deal with difficult persons in the future.