What 868 Eric Karros cards from 1992 Upper Deck looks like 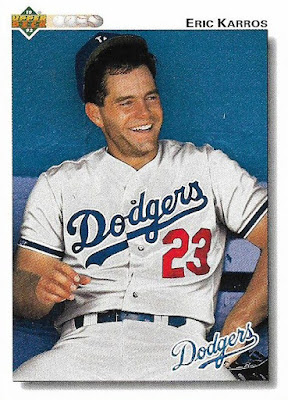 Back when bipping was all the rage, I got bipped about seven or eight times. The most of one single card I received was 64 1990 Donruss Diamond King Bryn Smith cards.

At the time, that was considered epic. Ha, ha, who in their right mind collected 64 of the same card of Bryn Smith? People couldn't get over it.

But that was the tail end of bipping. For the most part, peace settled over the card land and has reigned for the last five years or so. If you see a bipping nowadays it's quickly snuffed out and reported to authorities. We are living in a society here.

So, please tell me what the hell is this: 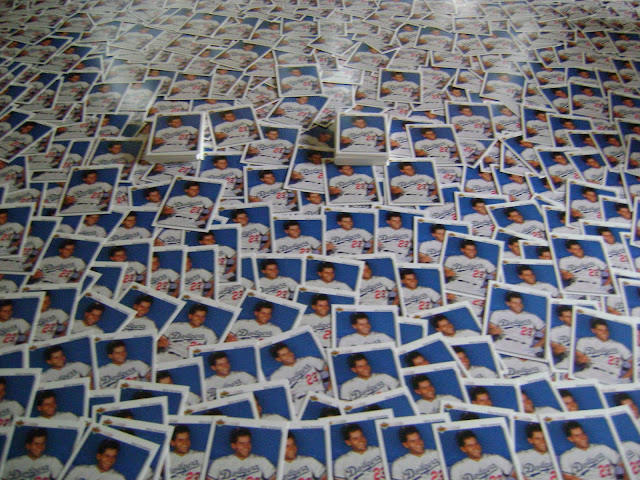 I am now in possession of 868 1992 Upper Deck Eric Karros cards. I counted them.

These arrived in the big second box that also contained the complete 1987 Topps set that Rob sent me.

I am really beginning to wonder about Rob's mental state.

The Karros cards were scattered all over the package. Some used as packing material, some packed together in a brick of 50 or so in team bags. Hundreds of photos of a laughing Eric Karros in the dugout. Laughing at me!

This is what a wall papered with '92 UD Eric Karros cards would look like: 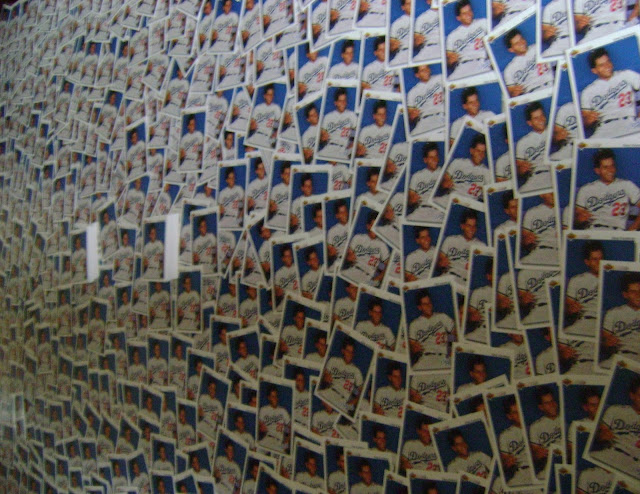 Does that give anyone any ideas?

If it does, consult your nearest mental health professional.

In my time collecting, I don't think I have ever intentionally accumulated more than 10 of a single card. It's just never been a goal. But, obviously, the '90s did some weird things to people. 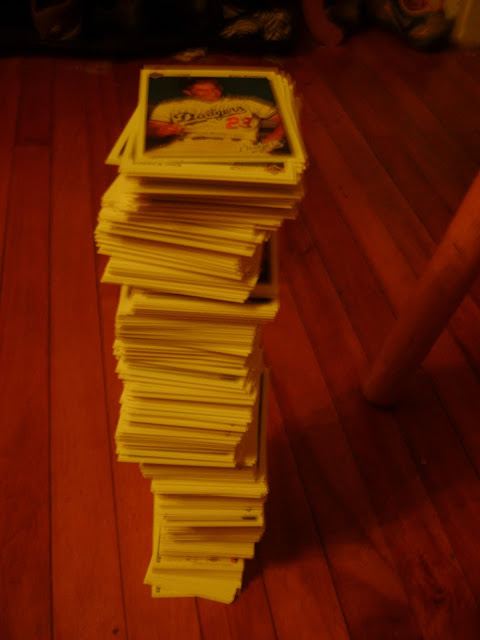 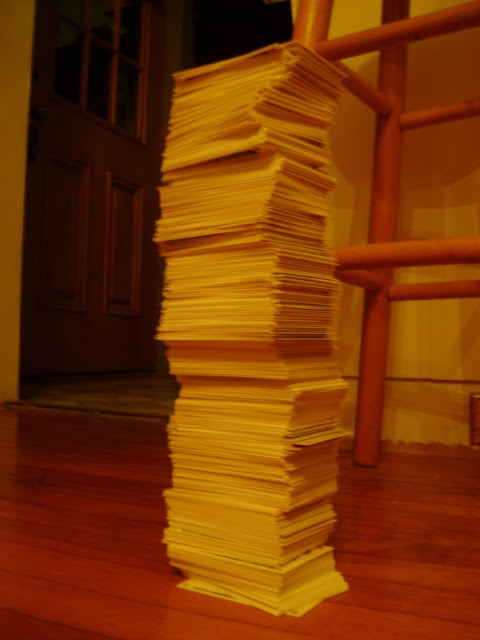 That's the stack viewed from the bottom. 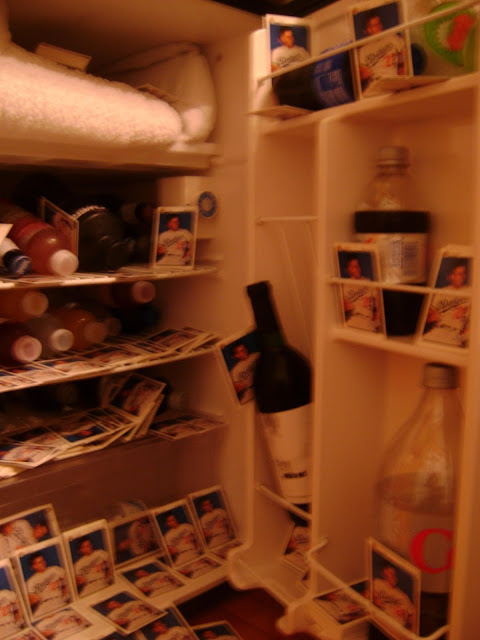 That's 868 1992 Upper Deck Eric Karros cards in the mini-freezer getting a drink. 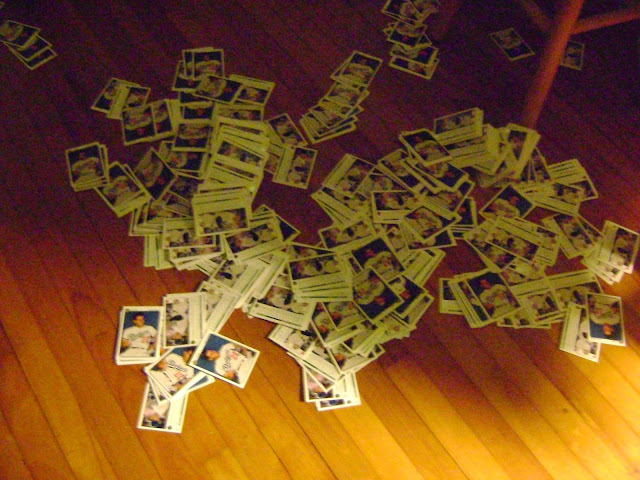 And that's 868 1992 Upper Deck Eric Karros cards spilled on the floor in the middle of the night.

As you might imagine, I have no idea what I'm going to do with all of these. Everywhere I turn, I come up with a dead end:

A bookmark for 868 books in the house? I'm fairly certain we don't have 868 books.
An experiment to see what 868 Eric Karros cards look like stacked end to end? I'd be committed by the other members of the house.

Fortunately, Rob sent a number of other cards that takes my mind off of this ugly situation. And I'll show those soon.

In the meantime, if you need a 1992 Upper Deck Eric Karros card, I have a few extras.

SpastikMooss said…
That is AWESOME!

If you decide you don't want 850 of them, I could probably find something to do with them. It'll annoy my wife, but pretty much everything I do already does.
November 11, 2015 at 8:49 PM

Big Tone said…
Looking at that stack is eerily satisfying.I thought about clone collecting 1988 Topps Cansecos before.I've had one with a crease running right down the middle of it since my childhood,and it's bugged the crap out of me ever since.The only way to remedy that Is with a bulk purchase of 88 Topps Cansecos.One of them is bound to be In better condition than the one I have now.That's not insane to want to do ,is it?
November 11, 2015 at 8:50 PM

Anonymous said…
Clearly you have to start a Tim Wallach-esque blog where you ask everybody to give you their 1992 UD Eric Karros cards.
November 11, 2015 at 11:09 PM

Anonymous said…
Wow. I just laughed out loud sitting in my bed reading this post. My wife asked what's so funny. I have no idea how to explain it to her.
November 11, 2015 at 11:18 PM

AthleticGigantes said…
To say "Wow!" would be an understatement. The expression on your face upon seeing those cards must have been funny. WOW!

I sometimes use an old card as a bookmark. Donate them to your local library as bookmarks.
November 12, 2015 at 1:06 AM

Dan said…
I thought my collection of 50 1987 Topps Dave Magadan cards was impressive. All acquired pre-Internet. Still not as impressive as triple digits.
November 12, 2015 at 1:58 AM

Bo said…
He works for Fox Sports - maybe wait until the beginning of the season and mail them to him there - or to one of his fellow announcers. They could have a good time with it.
November 12, 2015 at 10:41 AM

GCA said…
OMG that's hilarious. Must have been one of those annoying auctions on eBay where the guy had 868 partial sets of '92 Upper Deck and idiotically listed them as groups of the same dang card instead of starter sets that may sell....

Fuji said…
I had heard about guys from Upper Deck walking into Frank & Son's card show (in Southern California) with monster boxes filled with 89 Griffey... which totally makes sense to me. 1992 Karros? Not so much. I just threw away about 200 1989 Mark Lemke rookies, because I had no idea what to do with them. Best of luck with those.
November 13, 2015 at 10:20 AM

steelehere said…
defgav, sorry I don't have any 1990 UD Grissoms. I do have bulk quantities on a few other cards including over 4,000 1979 Topps Steve Garveys.

In case anyone was wondering, I originally bought 1000 1992 UD Karros' cards on pure speculation for a few cents each after seeing them for sale by a dealer who was breaking 1992 UD cases to sell singles in a Sports Collectors Digest advertisement back in 1992 (before the season began). I sold a few of them to get my money back because he won Rookie of the Year that same year but obviously I had a bit of leftover inventory.
November 13, 2015 at 3:35 PM