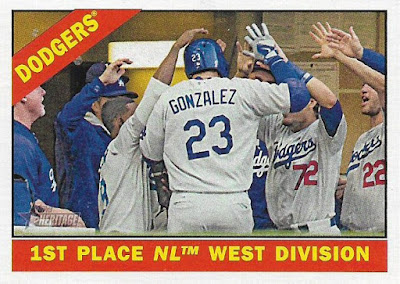 Have you ever stopped to consider your greatest collecting fear?

Maybe you haven't. It's not exactly anything you want to think about in what's supposed to be a fun hobby. Fear should never enter any room filled with cards.

But if you reflect for a moment, I'm sure you can think of the big fears that most collectors have, even if they exist only in the deep dark recesses of your brain. The two biggest ones I can think of are: losing your entire collection in a fire, or having no one to take on your collection after you die.

But those terrible fears are too distant for me to keep me up at night. I operate on a more day-to-day level because it's more realistic. And for me, the greatest realistic collecting fear I have is that I will have some significant hole in an easy-to-complete set that I thought was completed ages ago.

This is why it drives me crazy when I discover some card that I needed that I think I should have had already. For example, Spiff of Texas Rangers Cards sent me some Dodgers recently and the above 2015 Heritage card fell out.

This card didn't look the least bit familiar to me. But I checked my want list and the card number wasn't on it -- which usually means I have it already. But I checked my binders and, sure enough, that card was not in the binders.

You can see how ridiculous this fear is, right? My ultimate fear will never happen because I will never be done collecting. And because I'll never be done, all I need to do is find the missing card and acquire it. Problem solved. Fear absolved. 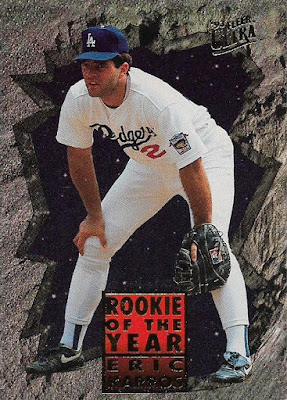 For example, this card. Also from Texas Rangers Cards. This is an insert from 1993 Fleer Ultra, a set in which I figured I had put to bed all of the Dodgers years ago.

But, in fact, I need this card. I've never seen it before in my life.

The fear wants to knock on the door now and say, "Hello! Remember me? You should have HAD that card by now!"

But I'm ignoring it. I'm glad I have this card and that's all there is to the story. In fact it's a day for celebration, not fear. Yay! A card I needed (whether I knew I needed it or not)! 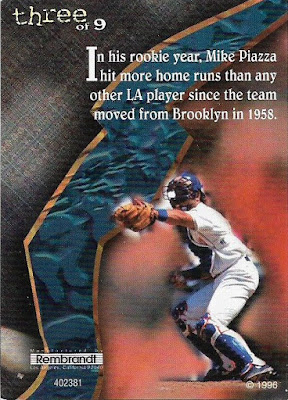 Here is another card I needed. This comes from that UltraPro set from 1996 in which the nine individual cards form a Mike Piazza puzzle (pro tip, Topps: make your insert sets divisible by nine).

I need three more cards from this set, I believe. Cards 2, 4 and 7. And the fear has no effect here, because I'm never under any illusion that I'll complete any team set from the mid-1990s. 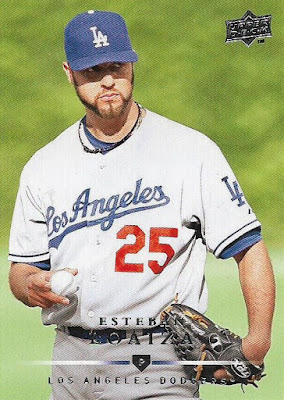 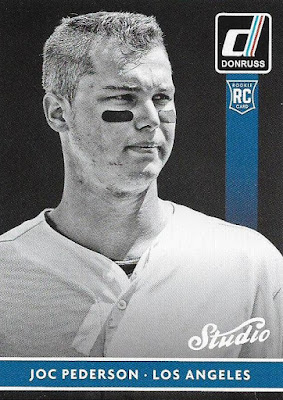 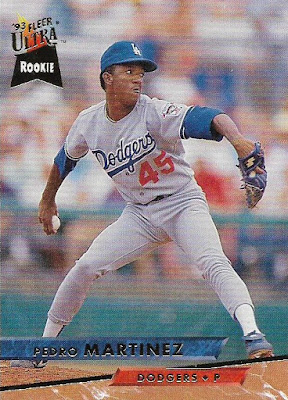 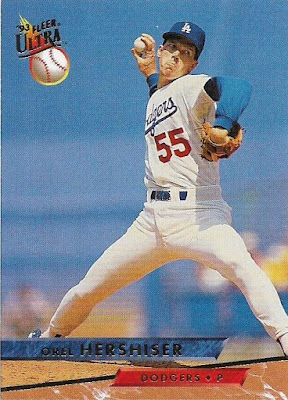 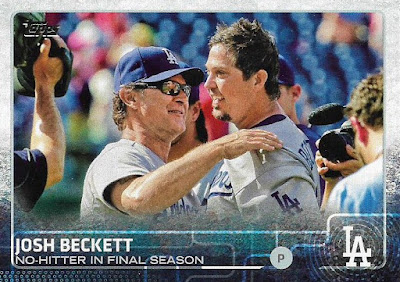 There is no deadline on completing sets.

Complete them when you like, whether it's the most available, junk waxiest set ever made; some obscure insert set from a brand no one collected in 1998; or late 1940s Bowman.

This isn't work, this isn't school, this is a hobby.

Throw that clock away.

SpastikMooss said…
I totally had that whole 9 card Piazza set as a kid. No longer though, so far gone.

Guy bought a box of 75 Topps Minis and is busting five packs at a time. Thought you might like to take a trip down memory lane and see first hand someone pulling a Brett rookie card. I guess one of my biggest fears would be dropping $3000 on a box of 75 minis and pulling a Brett with the gum attached to it.
November 13, 2015 at 12:21 AM

RAZ said…
I can identify with the fear of what to do with my collection(s) when I die. To anyone else, even other collectors, my collection is just a bunch of stuff. There are parts of it that might hold appeal for one person or another, but most of the worth is tied up in how I feel about the objects I collect and how they tie in to the events in my life. My collection is tailored to me, and when I am out of the picture the key to understanding where everything fits in is gone. It reverts back to just being so many stacks of cardboard.
November 13, 2015 at 3:59 AM

Commishbob said…
NOW you tell me. After I end up buying TWO '63 Fleer Ron Santos and TWO Bill Mazeroskis because I am in too darn much of a hurry to finish off sets.

GCA said…
Sometimes I think the website service I use to maintain my wantlists is reverting back to the version of my page from a couple days before. Because I KNOW I checked off that stack of player collection cards I got before, but now I bought another stack ~ and five of them are already in my binder! AARGH! How does that happen? New cards go in the computer room to be checked off, and then move into the next room to be put away.
Maybe my collection is growing on its own???
November 13, 2015 at 10:21 AM

Jeff said…
I've already come to terms with the fact that there's nobody to pass my collection to. But I think a flood of my cards is a bigger fear than a fire. Somehow wet mushy or warped cards seems way worse than ashes.
November 13, 2015 at 2:00 PM

Jeremya1um said…
My biggest fear would probably be losing all my cards in a fire or something. But I guess you can't take it with you when you die so sometimes I think I should spend my time and money doing something other than cards.

I'll probably leave my collection with my future kids when I die or maybe with one of my nephews. If anyone doesn't have anyone to pass their collection on to when they pass I would be happy to take any cards that aren't able to find a home.
November 13, 2015 at 6:01 PM