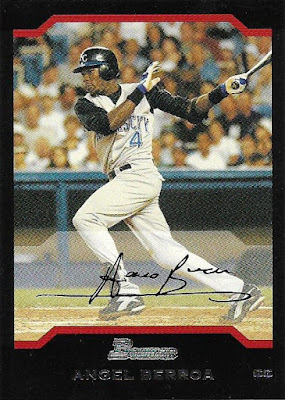 Tonight, regardless of whether the Mets win or not, will be the last baseball game I watch live for the season. Games 6 and 7 are scheduled for days when I work, and although there's a TV at my job, I won't have time to see more than a few snippets.

But don't worry about the end of the season. As usual, Night Owl Cards won't be cutting back during the offseason. I have plenty of interest in baseball cards through the winter months -- maybe even more so than the summer months. And I'll be even more eager to keep things going thanks to a postseason without an ugly ending. Good things can happen in baseball, people!

One of the reasons that I like this World Series matchup is because it features two teams that haven't won the Series since the 1980s. I feel a kinship with those teams, and fans of those teams, because my favorite team is also Stuck in the '80s.

Those "Stuck in the '80s" teams -- the Dodgers, Royals, Mets, A's, Orioles and Tigers -- have waited many years, wearing their Ocean Pacific gear and quoting lines from "Weird Science" long after it stopped being cool. Only the Cardinals and Phillies have been able to break free from that decade and win another Series.

The Stuck in the 80's teams have put their hopes in players like Angel Berroa, a Rookie of the Year flameout (who played for both the Royals and Mets, by the way). They've struggled through the Preston Wilsons, Karim Garcias and Chris Sheltons.

Finally, all the waiting will end this week for one of those Stuck in the '80s teams.

And, finally, your waiting is over, too. I'm going to announce the winner of last Thursday's contest.

There were 67 entrants and 78 overall comments. A couple people's comments were wonderings whether this set a record for comments on a blog post on Night Owl Cards. It does for a contest post. By a mere two comments. (The One-Card Challenge post -- which I don't know if anyone checks anymore -- has the most).

You had to guess the combined batting average for the Royals and Mets for Saturday's Game 4 of the World Series, without going over the actual average.

A lot of people smartly guessed low numbers, based on the previous postseason games. But Game 4 is a crapshoot. It almost always features each team's No. 4 starters and the games can get out of hand offensively.

It looks like the shiny Harpers, the Mariano Rivera relic, all the Kimball minis, the hockey and basketball cards, the Trout liquorfractor, and a bunch of other stuff, will be stopping at customs, because the winner is:

I was actually ahead of the game and had a stack (OK, it was one card) ready to go for him. So I'll get that all together and ship it to his igloo in Canada. I hope he doesn't set any of it on fire trying to keep warm.

Thanks, everyone, for playing. Thanks, Rob, for supplying the goodies.

Enjoy what's left of the World Series and 2015 baseball.

Commishbob said…
Holy cow....I read the contest post wrong (reading comprehension is sometimes lacking in us elderly citizens). I thought I was guessing the BA for the whole Series. If that had been the case my .216 might have won. The Series ended at .2169 I think. That's what I get for being an idiot.
November 2, 2015 at 8:12 AM