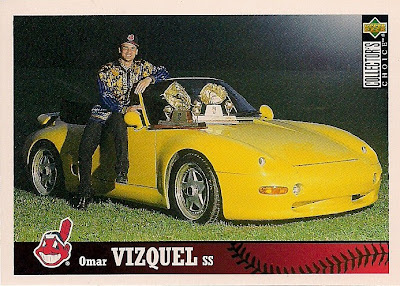 This is the greatest night card of the 1990s. Yes, I know I could shoot down that statement with my very own collection in no more than five minutes. But why spoil the fun? Look at that card and tell me it's not the greatest thing you've ever seen.

What I love about this card, other than the always terrific electrified light against a blanket of black, is the customary Collector's Choice way of submitting a fairly bizarre photo without comment. There is no explanation for this picture on the card back. What? You don't lean against your yellow Porsche 911 with a couple of golden glove trophies in the middle of the night, too? You've got to get out more.

The best I can tell, from my usual "I have no time for this" internet researching, is that Vizquel won this car during the course of landing his 11 Gold Gloves. This card was issued in 1997, meaning Vizquel would have won four straight Gold Gloves at the time. Achieve four Gold Gloves, get a car free? I don't know.

I also found a reference to Vizquel driving his yellow Porsche to a diner, sitting down with some fans who asked for his autograph, talking to them for an hour, and picking up the tab. It seems like that Vizquel was a pleasant guy to everyone but Jose Mesa.

So I have this card. And I will live vicariously through Vizquel.

But not the part about fielding one of the most difficult positions in sports with the artistry achieved by only a few for 24 years. But the part about driving a yellow sports car onto a green field in the dark of night, placing a cap on my head, and posing for a baseball card.

petethan said…
This is also such a '90s card. I love that we're finally getting far enough away from the '90s for the decade to start to have an identity. Not the most flattering identity, but it's something. Which is what you have to say about that car, that shirt, and that card: That's really something.
September 15, 2013 at 10:52 PM

jacobmrley said…
The only thing that would make this card cooler is a hokey Stadium Club mid 90's logo, rather than the stately UDCC one on it.

Plus, I have always thought yellow sports cars were a waste. This card at least found one good use for one.
September 15, 2013 at 11:23 PM

Need More Cardboard said…
Ahhh Collector's Choice. The sets that got me into collecting in the mid 90's thanks to it's excellent price point for a kid with a meager allowance. 96 and 97 CC particularly will always hold a special place in my heart.
September 15, 2013 at 11:34 PM