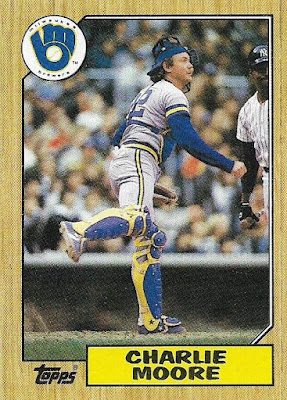 One thing that I have learned from operating a popular blog is that people actually do read the words that I write. However, when they extract the meaning from those words, it is sometimes what they want it to mean, not what I want it to mean.

For example, I fully expect to receive Donruss puzzle pieces in the mail after yesterday's post. Even though I wrote in that post that I have no desire to complete any of the incomplete puzzles that I showed, people will interpret that post as me saying that I desperately want to complete them.

All right. Whatever. Bring on the puzzle pieces. If that's the price to pay for people coming to your blog every day, I'm up for it. Resistance is futile.

And, here, I have another example for you.

A couple of weeks ago, I showed off a very large box of goodies sent to me by Rob, a.k.a., steelehere. I took some of the contents of that box and turned it into a contest.

Well, that wasn't the only box Rob sent.

There was a second one, and before it arrived, Rob sent me an email. In it he said the following:

"You'll see something that you're not a big fan of but it definitely fills a need of yours."

Great. Somebody else deciding what I need.

But I've got a somewhat open mind, so no big deal, and not too long after that email the second box showed up. It is quite possibly the heaviest card package I've ever received. And the contents are good for at least three posts, probably more (don't worry, I'll space them out).

One of the items that weighed down that box is the same item that Rob "warned" me about. 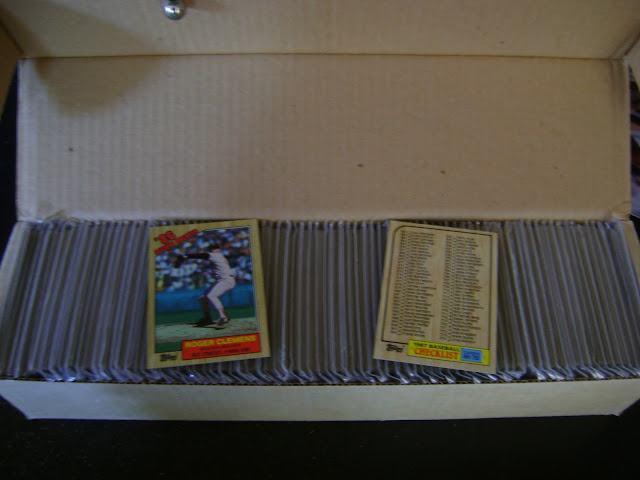 What you see there is a complete set of 1987 Topps.

If you've read this blog for awhile you know that I have said on several occasions that not only had I not completed the 1987 Topps set but that I really had no desire to complete it. Even though every other Topps set from the '80s sits complete in a binder in my card room, there was no aching hole in my collecting soul that would only be filled by 1987 Topps.

Obviously, Rob would have none of it. 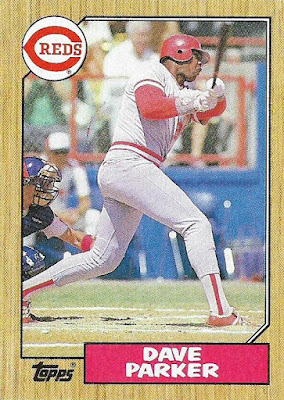 For decades I owned maybe 150-200 cards from 1987 Topps. That's what resulted from the packs that I bought that year. Over the last 10 years or so, I accumulated about 200 more cards from the set, through repacks mostly. The cards -- although wildly popular with those who grew up during the junk wax era -- didn't thrill me any more than they did in 1987. 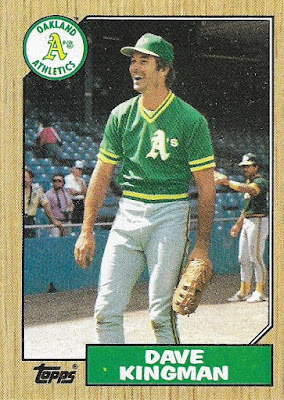 Obviously, these cards were everywhere. You could argue that 1987 Topps was the most overproduced of all sets (I still see more 1989 Topps). And I started to think, wouldn't it be interesting if I could come close to completing 1987 Topps passively? What if I just kept buying repacks and such and suddenly I had 715 cards from the set? Wouldn't that be cool? 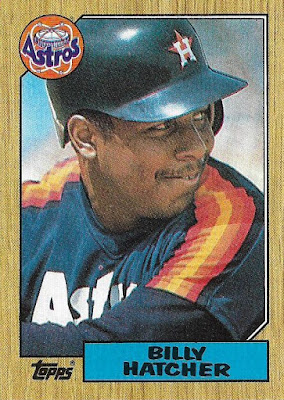 Rob apparently thought this was silly. "Who collects like this?" he must have said.

It's pretty obvious how Rob collected the set. As you probably saw from the picture, the set is jammed into one box. Seventy-nine different penny sleeves contain 10 or so cards from the set. Rob said the set has been stored like this for decades and I can tell. 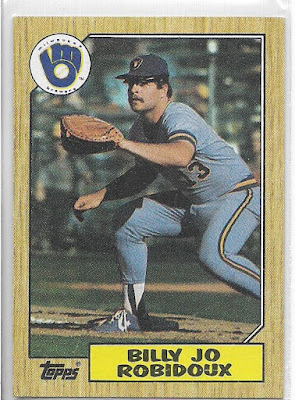 These are the cards that in 1987 terms were determined to be VALUABLE. They were investments, destined to rocket in price and pay for your waterfront home. So, yes, players like Tony Gwynn and Roger Clemens are contained in their own penny sleeves, but also players like Billy Jo Robidoux here. The fact that Bruce Ruffin and Tracy Jones and Robby Thompson receive their own penny sleeves is ... well, I'm trying not to snicker, but sooooooo late 1980s.

Collectors in 1987 were adorable.

It's entirely possible that Rob at one point tried to sell this box for one million dollars. 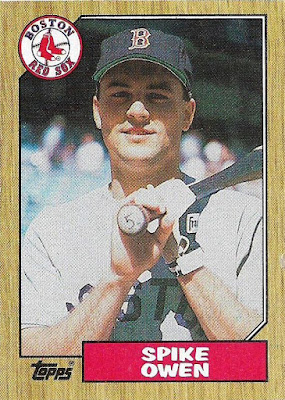 But enough of me poking wise. There is something else I want to get to with this set.

During my collecting days, I've seen more than my share of junk wax. Certain cards I have seen so many times that they lose their meaning. How many times do I need to see the 1989 Topps Roberto Alomar Jr. card? The same amount of times I need to hear "Eye Of The Tiger" again, that's how many times.

There are plenty of those same cards in 1987 Topps. Dave Bergman, Paul Molitor, Alejandro Pena, I've seen them more times than the inside of my own car.

But if you're a set collector, you know what I'm getting at next. 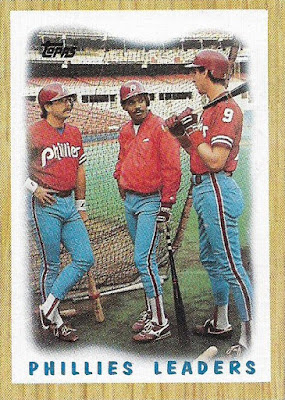 How is that possible? It's possible because unless you attempt to collect a set, you'll never see all of the cards that need to be seen from that year. You will be deprived of certain golden gems. And this is one of the greatest parts of set collecting. The joy of discovery. And by the time you've completed the set, you will have discovered them all. 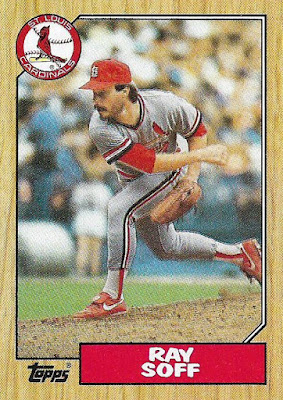 Ray Soff. Until the moment I prepared for this post by looking through as many cards in this box as I could, I had never heard of Ray Soff. 1987 Topps has been around for 28 years, and I'm now just discovering someone named Ray Soff.

That doesn't seem right. I should have known there was a Ray Soff a long time ago.

Rob probably thought so, too. And that's why I now have a complete set of 1987 Topps.

And that means I have now completed Topps sets from 1974 through 1989. And I know all the players from all of those sets.

So, yeah, I guess this did fill a need of mine. Although now I have to get a binder and all of that.

Heh. Anybody need any?

Big Tone said…
What's cool about recouping some of those old sets/cards Is If you can get them In good condition.I've had a ton of 87 Topps Keith Hernandez cards,but they pale In comparison to a crispy,clean copy with 4 sharp corners.I've always liked the Boggs from this set.1987 Topps also marks the return of the Golden Cup!
November 9, 2015 at 8:51 PM

Nachos Grande said…
I'm using 1987 Topps cards as packing material for my recent group break. I think after this break I'll finally be out of the stuff (and no, I do not want your duplicates - I already have my own set complete, thank you very much)!
November 9, 2015 at 9:17 PM

Hackenbush said…
Gee, if I'd known you had wanted a set... I have three sealed factory versions about six feet from where I'm sitting. I did buy them new thinking they'd be worth something in 2015 (or a lot earlier). I'm not very bright.
November 9, 2015 at 10:02 PM

Steve at 1975BaseballCards.com said…
I need to get on Rob's Christmas list :-)

I'm always tempted by the prospect of players from the 75 Topps set in other years but I don't think the cardboard's worth the shipping cost...
November 10, 2015 at 1:45 AM

Stack22 said…
I'm certainly of the age demographic that considers '87 an iconic classic. Due in no small part to the fact the largest portion of my father's collection to survive the thieving hands of my much older cousins was '62 Topps. It served as a tangible connection, at least in my mind, between myself and my father.
November 10, 2015 at 10:21 AM

GCA said…
I got my '87 set two years ago from a starter set from my friend, which we then completed the next day at the LCS down the street, pulling every other card from the bulk boxes of junk wax, including the Bonds. Started and finished it in two days. In 2013.

Fuji said…
1987 Topps recently moved into my top 10 list of favorite Topps baseball card sets. It's got a solid design... and I like a lot of the photographs. It also played a significant role for me in terms of card collecting. Congratulations on adding it to your collection.
November 11, 2015 at 12:14 PM