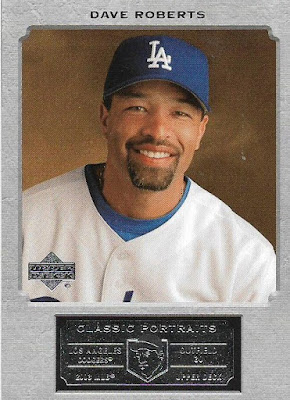 Dave Roberts was named the Dodgers' manager last week, reuniting him with the team he played for from 2002-04.

Roberts debuted with the Indians, ended with the Giants, had his best season with the Padres, and is probably most known for his steal of second base and sprint home for the Red Sox during Game 4 of their epic ALCS comeback over the Yankees in 2004.

But he solidified himself as a major leaguer with the Dodgers and now they're depending on him to help fix what ails L.A. on the field (hopefully without using anything referenced by the Beatles). The Dodgers don't have too many problems in the talent department, but their decision-making in the field, on the bases, at the plate, has been an issue for years. Combine that with a rash of injuries, bullpen problems and a manager with the dopiest decision-making of all, and, no, it's not a surprise that the Dodgers are eliminated in the playoffs each year.

I don't know if Roberts is the answer, but I'm hoping he's not the handicap that Don Mattingly was.

Anyway, Roberts has also been trumpeted because of his Asian and African backgrounds, but what I find the most interesting in the category of irrelevant facts is that Roberts is the first of four major league Dave Roberts to manage in the majors.

Four Dave Roberts have played for 13 different teams in MLB history. The first, a 1960s outfielder for the Colt .45s and Pirates, has but one solo card, a high-number in the 1966 set.

The second two are the Dave Roberts of my childhood, a much-traveled pitcher who finished second in the NL in ERA with the Padres in 1971, and a utility infielder who also started quickly for the Padres, then faded into obscurity.

I know of several cards of both of those '70s Roberts and there is no question what the best card of each player is.

The best card of the utility infielder Roberts: 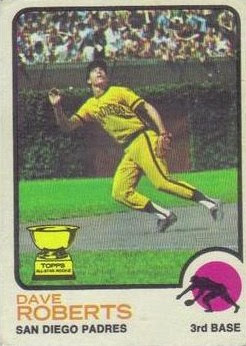 The best card of the pitching Roberts: 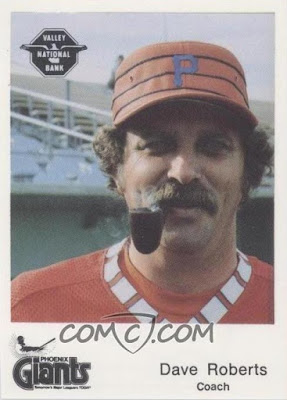 No, I do not own either card, but I will someday.

But while I've known my favorites from the two '70s Roberts, I've been very neglectful in examining the cards of the only Roberts to play for the Dodgers, their current manager.

Since Roberts played for L.A. during a period when I wasn't collecting, I've had to play catch-up with his cards and I've accumulated 18 different ones so far. I thought it'd be appropriate, given his recent hiring, to select the top six Roberts Dodgers cards in my collection.

Why six, you ask?

Because that's the number of World Series he's going to win for the Dodgers, OK, wise guy?

Here are my top six: 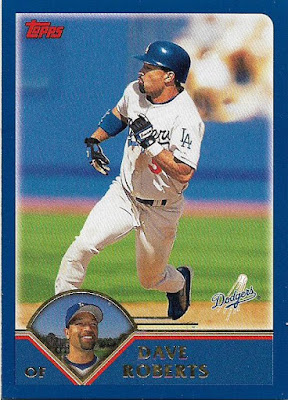 Roberts burning around the bases. Roberts stole 118 bases during less than three seasons with the Dodgers. He was quick and smart. I don't know what that means for the Dodgers. Current management doesn't seem too enamored with filching bases. 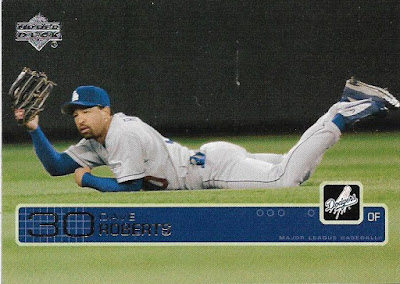 If you want to know the inspiration for Topps' 2015 design it could be from early 21st century Upper Deck sets like 2003 flagship. "Grids and blips" is what I should call the 2003 UD design. 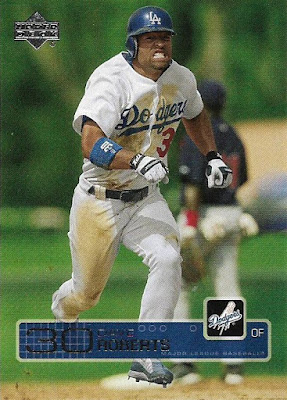 While most card companies were omitting Roberts from their sets in favor of stars and rookies during the early '00s, Upper Deck decided to issue two cards of Roberts in its base set. It doesn't make a lot of sense, but God love ya, UD. Here, Roberts visually explains how difficult it is to run. As someone who runs periodically for exercise, this sums it up here. That's what it feels like. In other words, why does anyone do this? 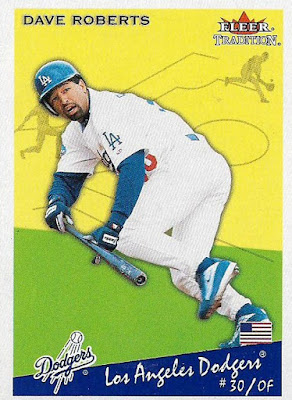 Buuuuuuuuuunts!!!!! Oh, no, Twitter's gonna have a collective coronary if the Dodgers play the way Roberts did. Roberts had 13 sacrifice bunts while with the Dodgers and 41 for his career. It makes for a great card though. 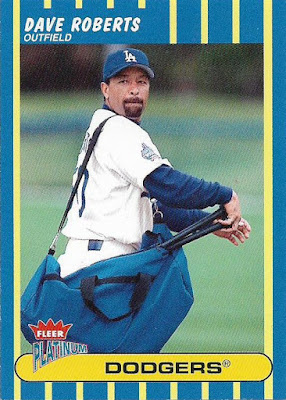 Candid baseball card photos are the best baseball card photos. And the best part of this picture is the bag. Bags for baseball bats are always awkward. They either don't fit, or the bats are strapped to the side just waiting to poke someone's eye out. Even if they do fit, it looks like you're carrying around a bazooka. 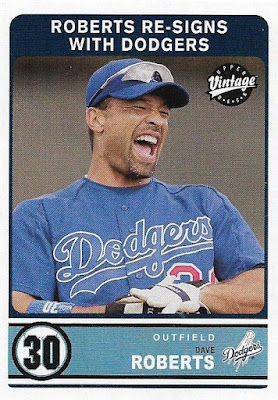 Woo-hoo! Roberts re-signs with the Dodgers! Everyone's super happy! Why a relatively minor signing like this deserves a card is a wee-bit puzzling, but I don't care! Look how happy he is!

This is my best Dodgers Dave Roberts card so far.

I've actually added another Dodger Roberts card to my COMC cart recently. It's going to challenge laughing Roberts for the top spot, I think. 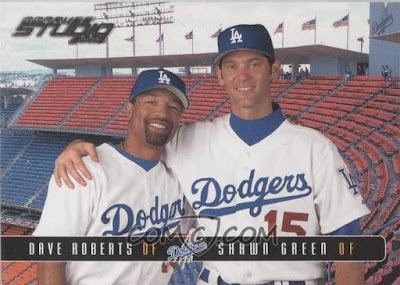 This card from 2003 Studio is humorous in that Roberts doesn't get his own card in the set. Shawn Green has a separate one, but Roberts is forced to share one with Green.

I'm looking forward to my Roberts cards soaring exponentially in value as he leads the Dodgers to pennant after pennant.

Anonymous said…
No one can succeed like Dr. Robert(s)?

I didn't think that the game of managerial musical chairs would end with Bud Black outside, looking in, but I guess that shows what I know.

Beatles and baseball. Two of my favorite things in life.

BobWalkthePlank said…
Rumor was they stayed away from Gabe Kapler because he had too much of an in with the front office. Not sure if that was true, but I guess it makes sense if they thought it would be a conflict of interest. As you know it doesn't take much for a Dodger story to blow way out of proportion.
November 30, 2015 at 7:50 AM

Commishbob said…
Live and learn. I heard that they had hired "Dave Roberts" and I thought it was the former infielder. I had no clue about this Dave Roberts. His career kind of slid past me. I hope he's successful.
November 30, 2015 at 8:38 AM

Unknown said…
Hopefully he can build back a good team that's currently needing a fix. As for my Braves, look for us in the cellar...again.
November 30, 2015 at 12:23 PM

gcrl said…
Nah, it was a "Princess Bride" reference.