November 21, 2015
(Greetings on "World Hello Day." This is the day on which you're supposed to say "hello" to 10 random people in an effort to foster world peace -- what can I say, this day was invented in the '70s. But here is my official "hello" greeting to you. There's more than 10 people reading this, but I'm sure sending hellos through the interwebs wasn't what the original inventors had in mind. Let's get on with Cardboard Appreciation. This is the 234th in a series): 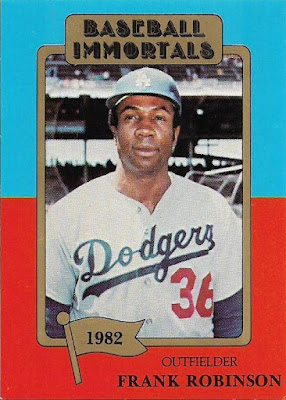 Have you ever spotted a card online that you had to have? The shipping is too high, the price for the card is probably too high, and the condition could be a little bit better.

But none of that matters. We are way past "I got a deal" here. "I need that card!"

There aren't enough of those card stories on the web. I kind of like those stories more than the "I got a deal" stories. Yeah, yeah, you got some cents off. We're all broke, I get it. But where's the passion for the CARD, man? The passion that says, "I don't care WHAT it costs"?

This is what happened here.

Sure, this card isn't anything expensive, which makes the whole purchase thing easier, but it certainly falls in the Must. Have. category. For starters, it's Frank Robinson in a Dodgers uniform.

It's not easy to find a card of Robinson in a Dodgers uniform. For years I have settled for the 1972 Topps traded card. 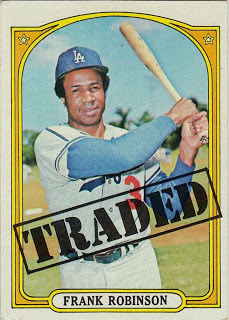 This is a wonderful card. One of the 100 best Dodgers cards ever made, according to my count. But it's only one. I have like five cards of Jim Thome as a Dodger and he played in 86 fewer games as a Dodger than Robinson did.

I was so desperate for another card of Robinson as a Dodger that I welcomed this card into my Dodger binders: 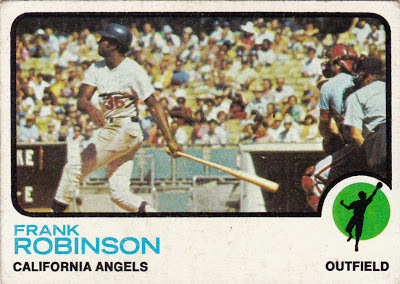 So, yes, I absolutely had to have the SSPC Baseball Immortals card.

It's a set I love already, thanks to 1975 Topps vibe featured on every card. The set, which features every Baseball Hall of Famer up to the point of set publication, was originally issued in 1980.

Then the set issued an update in 1984 with every player inducted into the Hall since 1980. The Robinson card is part of the 1984 update, so I guess technically it is a 1984 SSPC Baseball Immortals card.

There were also updates to the set in 1986 and 1987. And it is my distant mission to collect them all one day. It shouldn't be too difficult. 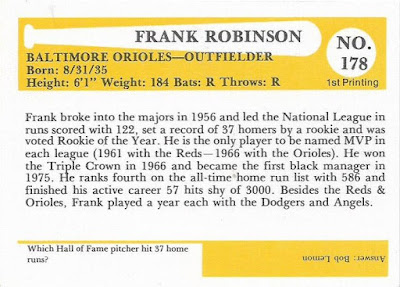 You can see that although Robinson is featured as a Dodger on the front, he is listed as a Baltimore Oriole. Because Robinson went into the Hall of Fame as an Oriole.

I'm sure Orioles or Reds, or even Indians fans, are upset that Robinson appeared in this set as a Dodger, since he's much more well-known for his performances with those other teams.

But there's no way I would have overpaid for this card if Robinson was shown as an Oriole or Red.

Robinson is a Dodger. It's a beautiful must-have.

AdamE said…
Yesterday I found a had to have card. Topps put out a 1960 pirates team set reprint in silver and gold that comes directly from Topps. You have to buy them as a team set too. I have been watching ebay and still no Virdon listed. There will soon be a broken set of both silver and gold on ebay minus the Virdon.
November 21, 2015 at 8:56 PM

Fuji said…
Baseball Immortals is such a great looking set. Thanks for the clarification on how it was distributed. I'd love to find a master set on eBay and throw that set into a binder, so I can soak in all of it's beauty. Congratulations on finally securing Mr. Robinson... whom I never even knew played for your beloved Dodgers.
November 22, 2015 at 3:20 PM

Steve at 1975BaseballCards.com said…
I had this experience about every other week as I got back into card collecting. It got overwhelming finding all the 1975 style cards created over the years. Now that I've caught up its manageable. But I'm sure it'll be something I crave as it gets harder to find ones I don't know about.
November 23, 2015 at 2:09 AM