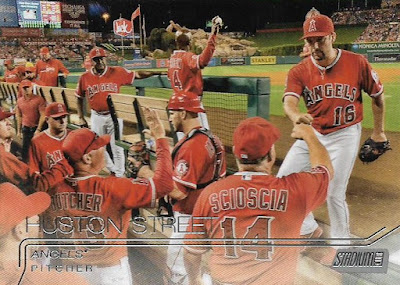 It's November, which is traditionally the month in which I start putting away that year's cards.

I've documented this before. Each year the year's cards sit in stacks on a desk until November. Then, if I'm collecting the set, I file them in a waiting binder. If I'm not collecting the set, they go in a box. They're filed in the box by year, then set, then team, then alphabetically. It's not exactly the best filing system for finding cards for trades, but it pleases my brain and that's the most important thing.

During this process, I evaluate various elements from the year. Some of what I find goes into the end-of-the-year post that you see on this blog. And one thing I like to do is figure out the best night card from that particular year.

I want to say the above Stadium Club card is the best night card of the year. I love the dugout shot, the team concept, the panoramic view of the ballpark. It features much of what I enjoy when I go to the game.

Here are some other great night cards from 2015: 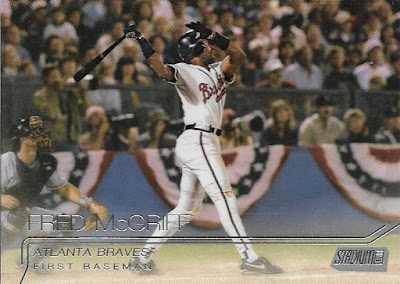 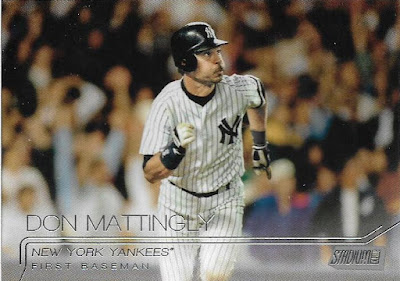 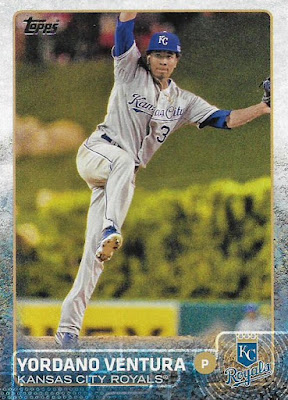 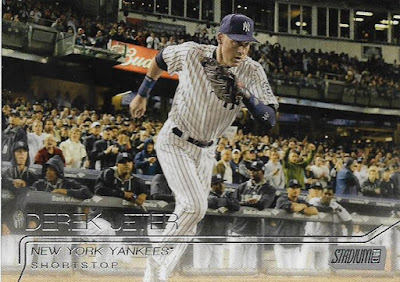 Some may argue that the Jeter card is better than the card of Huston Street. But I'm more of a team guy than a hero worship guy. (Also, if you're wondering, I consider Yasiel Puig's Stadium Club card a dusk card, not a night card).

Those aren't all of 2015's great night cards. Those are the only ones I had time to pull today (I barely have time for this post). But I have some time off coming, and that's when the 2015 filing will take place, and you can be sure I'll figure out the best of the best night card for the year.

Besides, the Street card has something else going for it ...

Night Card binder candidate: Huston Street, 2015 Stadium Club, #4
Does it make the binder?: Yes. It alleviates this issue that I wrote about a few months ago.