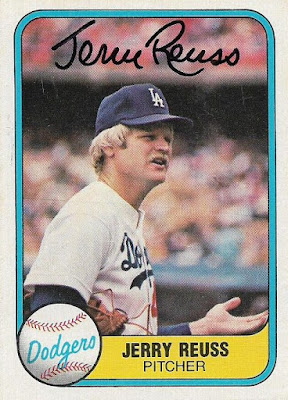 The Junior Junkie is asking us for our "best binder pages," a collection of nine cards in your collection that are so good that you would take them with you if you were marooned on a deserted island.

I've never understood the "stranded on a deserted island" bit. Nobody plans to be stranded. So it doesn't make sense to me when people say, "what would you bring with you if you were stranded on a deserted island?" I know being so literal and bringing up the flaw in the question would mean likely failing a corporate interview, but I've just got to point things out like that.

I like to look at my collection as a vast accumulation of fantastic rather than a narrow display of marvelous. Crystallizing the collection to nine cards can be a frustrating and almost impossible task. For example, why would I want to boot the above card, signed by Jerry Reuss himself not long before Jerry Reuss himself commented on my blog, from that group of nine?

It's just not the way I look at my collection.

Shut up you guys -- this is what my Best Binder Page looks like: 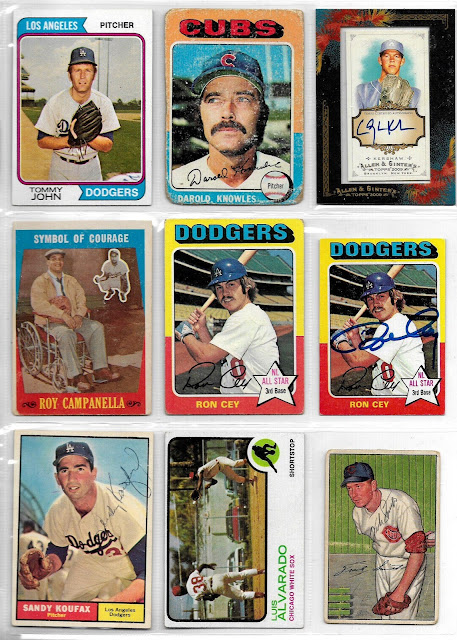 On that page are eight Topps cards and one Bowman. Only one card is not vintage. And although four of these cards are signed, I considered making this page nine unsigned cards, because I could easily do that and still be thrilled viewing those cards over and over on my scheduled deserted island trip.

Unlike some Best Binder Pages I've seen, none of these cards are particularly rare. "Rarity" isn't something that's high on my priority list. But sentimentality is. Most of these cards hold a connection between me and someone or something else. And that's why I instinctively picked them.

You've seen all of these cards before on my blog, but let's review them again: 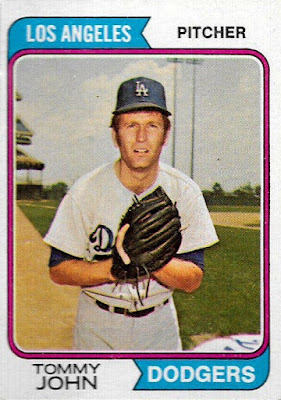 The 1974 Topps Tommy John is the first baseball card I ever saw face-to-face, yanked out of a cello pack as an 8-year-old without a clue of what I had in front of me. But it is what sparked my Dodger allegiance, so it's cemented in the top nine for two reasons. 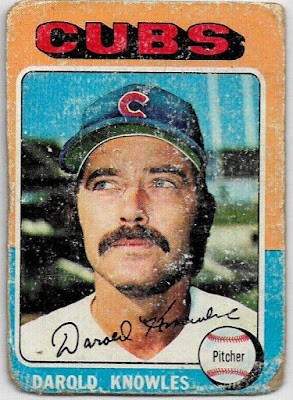 The first card I pulled out of a pack of cards that I bought myself, and by "the first card" I mean "THE first card." This is that card. It survived everything that a 9-year-old, and his younger brothers, could throw at it in 1975. Then it was stashed in boxes, stored in an attic, moved from place to place, and now here it is, a star of the blogosphere. 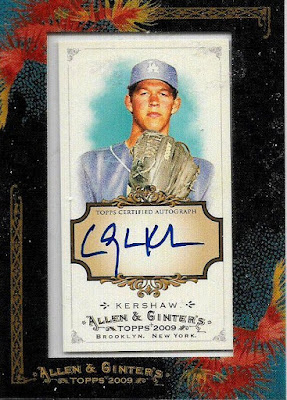 Normally I wouldn't squeeze a card from the last 10 years into this group, but I'm making an exception because Clayton Kershaw possibly could become the greatest pitcher I have ever witnessed. And that's a statement from someone who's watched Seaver, Carlton, Clemens, Maddux, Randy Johnson, everyone from the '70s until now. I consider this the best-looking Kershaw autographed card that I own. 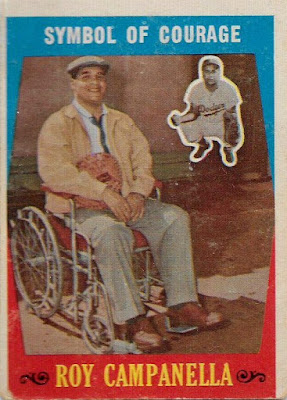 One of the more sought-after cards in the 1959 Topps set, this card is here for many reasons. Topps thought Campanella's journey was so important that it made a special card and put it in the base set (the BASE set, Topps). Plus, if I'm stranded on a deserted island, I'm going to need all the inspiration I can get. 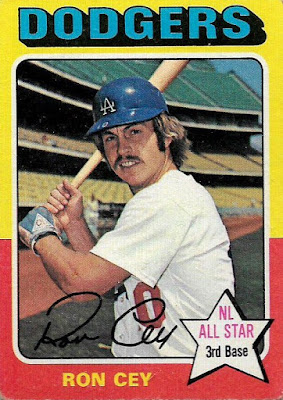 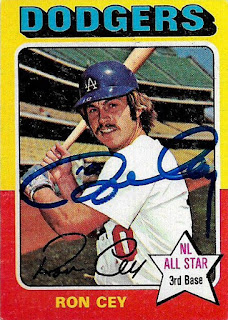 There are some that may consider this card as an improvement on the one above. There are others that would say that it is now ruined. Never mind, I just know that mini-sized '75 Topps cards are a delight and there's nothing more delightful than a mini version of my favorite player signed by Mr. Penguin himself. I own a dozen signed Cey cards. This is the bestest. 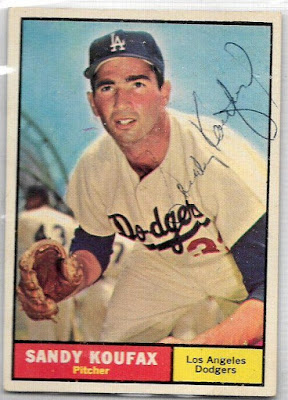 The Jr. Junkie is making me use tools for this post. The signed 1961 Topps Sandy Koufax came out of its vault and screwdown case to crash the best binder page. Not only is it a Koufax-signed copy of the card but it's the first autographed card I ever purchased. Good to know I did at least one thing right as a teenager. 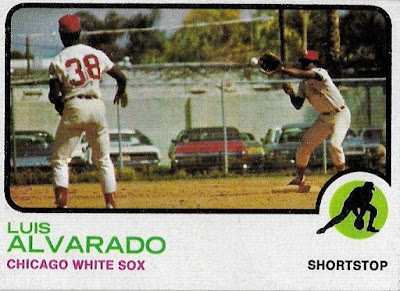 So, perhaps you're staring up at Night Owl and wondering, "what were the '70s like when you were a kid, old man?" After I smacked you for wising off to your elders, I would pull out this card. Everything on this card reminds me of when I was a kid. Playing ball in a fenced-in field. A row of Chevys and Dodges in the parking lot. Hell, even the telephone wires and trees give me the nostalgies. 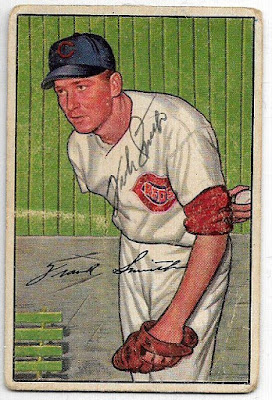 The Best Binder Page discriminates against cards larger than 2 1/2-by-3 1/2, but fortunately not against cards that are smaller. This '52 Bowman card of Frank Smith is the only one that I own that was signed by Smith that fits in the page. As I mentioned before, Smith and I formed a connection and then I was given his signed cards after he died. They're about as meaningful a collection of cards that I own.

And that's my Best Binder Page. It's full of sentimentality and mushy gushiness. Sorry, that's the way I was built.

However, I could easily assemble a different Best Binder Page with maybe only three or four of the cards that you saw here remaining in the page. Duke Snider signed cards for me. Carl Erskine, too. And I have so many cool-looking cards from the '70s and '80s. There is so much more "best" than nine little cards.

And that's because my collection is the best.

Cardboard Jones said…
Ahh- but couldn't you be stranded by your own choosing? Haven't you ever just wanted to get the hell away from everyone???
November 22, 2015 at 8:58 PM

Angus said…
I loved reading this post, and especially going back to read the Frank Smith post which you made well before I started reading card blogs.

There is definitely something to listening to old stories. I have been lucky enough to hear a couple of stories from Frank Mahovlich, and to have a good friendship with musician Les Emmerson. There is nothing better than hearing them reminisce.
November 22, 2015 at 11:22 PM

Dan said…
That's a great looking Darold Knowles card. Amazing that you've kept it all this time. I've known Darold for many years. I don't like getting autographs for other people, but I would make an exception for you if you ever want to get that particular card signed.
November 23, 2015 at 1:03 AM

Big Tone said…
When asked what cards would you want to have with you If ever you were stranded on a deserted island.My reply- "The edible ones".
November 23, 2015 at 8:48 AM

And don't eat the cards, Tone. Let's assume you've got Tom Hanks skills and can support yourself (and your volleyball friend).
November 23, 2015 at 10:20 AM

Fuji said…
There were so many ways to approach this AWESOME topic spawned by TJ. I really like the sentimental approach you took with your cards. That Knowles card is truly amazing. I wish I knew what the first baseball card out of my first pack was. Heck... I'd settle for knowing the brand.