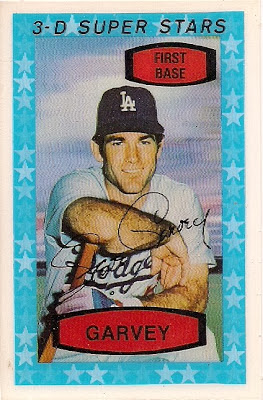 I was never the biggest Steve Garvey fan.

Even during his highest moments with the Dodgers, the great postseasons, the fantastic All-Star Games, the relentless ripping of certain teams (he seemed to slaughter the Padres), I was looking elsewhere.

Ron Cey, of course, was my favorite player on the team at that time. After The Penguin, I rooted for Reggie Smith, Dusty Baker, Davey Lopes, Pedro Guerrero and pitchers like Don Sutton and Doug Rau.

This isn't to say I disliked Garvey. I was proud of his accomplishments and any time he would excel in the game on a national stage so everyone could see it, I glowed. "That's the best player on MY TEAM," I said to myself.

I was very upset when Garvey was called out incorrectly at home plate during the 1977 World Series against the Yankees. I was embarrassed for him during that brawl with Sutton in '78. And I would recite for anyone who would ask (not enough people did) what his consecutive games played streak was and how far away he was from Lou Gehrig.

And I enjoyed his cards. Garvey always seemed to have some good ones, probably because he knew how to pose for the camera. The goody goody.

Garvey WAS the Dodgers for a lot of people during the '70s and early '80s. Whether they loved or hated Garvey, that was a fact.

Given all of that, it's about time I announce myself as a Garvey card collector. I need to recognize the leading player on the Dodgers teams that I rooted for when I first knew how to root for a team.

So I have added Garvey to the Dodgers I Collect page.

By my count, I have 101 unique Garvey cards during his Dodgers days. I only care about his time with the Dodgers. I have no intention to collect Garvey Padres cards.

I still have some updating to do on the list. The pitfalls of making a list without my collection nearby is I don't understand some of my notation in the files. So I hope to have the list fully complete in a day or two.

I don't expect to compete with the crazy Garvey collectors out there. I'm not a player collector at heart, so I will be going at my usual sluggish pace. The Garvey nuts can continue their scorched ebay policy without my interference.

But I do expect some help. I think at one point on this blog someone said that if I ever got a Garvey "haves" list together that they would ship some extra Garveys my way.

So now you know why I made my list.

Why it took me so long, I'll never know.

I'll leave you with a Garvey Superstars video. It's comical for a number of reasons (Frank Gifford's shorts, Garvey struggling to lift weights with NFL players, Gifford's leering comment about Cyndi Garvey, Garvey's frightening grin into the television camera, I could go on and on).

I joined the Topps Sports Club in 1975. The first mailing I got was the baseball mailing with the "autographed" picture of Steve Garvey. He was the only Dodger that was ever on my bedroom wall. Steve lasted only a few months before being taken down in favor of some of the 75 Reds.
September 30, 2013 at 9:52 PM