September 04, 2013
(Welcome back to Cardboard Appreciation. This is going to have to be a short one because work won't let us have nice things like insightful blog posts about baseball cards. Nooooooooo, we've got to read about someone's pointless high school soccer team instead. Heh. This is the 186th in a series): 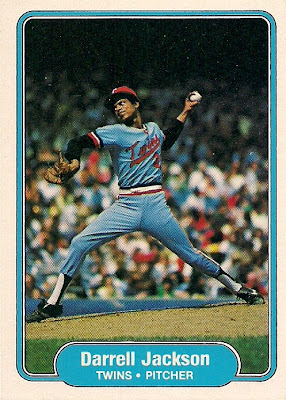 This card has fascinated me for too long.

I was most intrigued by the black cap version. Since I had the red cap Jackson, I wondered how was it possible that he could be wearing a black cap? I knew at the time about airbrushing, but fledgling Fleer wasn't known to airbrush then and besides, who would airbrush a red cap black just for the hell of it?

Well, it turns out Fleer might have because everyone went so ballistic over the "Craig Nettles" error in its 1981 set that it wanted to keep the buzz going.

But for years I thought it was an innocent error and I put the variations out of my head because I couldn't see how they could be possible. And besides, who cares about 1982 Fleer anyway?

But the thing is, I really, really like this card. It's one of my favorite cards in the '82 Fleer set. And because I like it so, those variations kept popping up in my head, hassling me: "you know there's one out there in which Jackson is wearing a black cap, doesn't that BLOW YOUR MIND??????"

So, with what little time I had today, I looked up the other variations.

Here is the black-cap variation:


Somehow I thought it would be cooler.

And here is the "no logo" red cap variation: 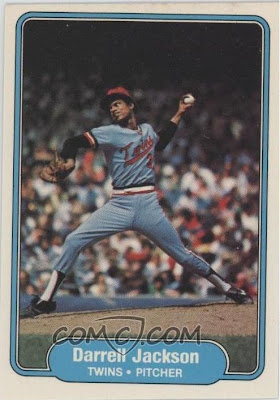 And there you are.

I feel like I've accomplished more than I did all those hours at work today.

petethan said…
Never knew about that one, although I was collecting at the time. I'll look forward to seeing what I have when the sorting project reaches "J." Not far to go. I've made it to "H!"
September 4, 2013 at 9:57 PM

zman40 said…
I actually have one of these, but I am not sure which one. I'd bet that it is the regular red hat. I guess I never realized that there were three variations.
September 4, 2013 at 11:28 PM

Commishbob said…
I'm also convinced that Fleer 'planted' errors and variations to peak interest. That aside I like the early 80s Fleer sets but I guess that's like admitting I liked the plain girl that sat in front of me in 5th grade. It's better kept to one's self.
September 5, 2013 at 5:51 PM

musicfan87 said…
I have a few of these in my dupes bin, I'll dig around and see if I have the other red cap. Still looking for the black cap one myself...

Unknown said…
Looking for the red no t version if anyone has one available. Bjp2277@gmail.com