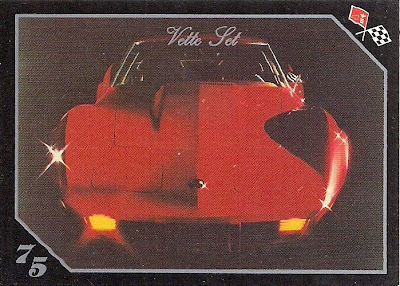 A couple of weeks ago, during my anniversary post, I mentioned that I'd like to make some small changes on the blog and in my online approach to the hobby.

Although these are such minor changes that I don't expect anyone to notice, I'm doing them for a reason. As much as I'd like this blog/collecting thing to be my job, it's not my job. I need to streamline, as they say in the auto industry.

The easiest way to streamline is to scrap activities that I never have time to do.

I operate three blogs and I'm on Twitter. That's plenty and there shouldn't be any more projects unless it involves cashing a paycheck.

So, you probably didn't even notice, but the link to my tumblr page has disappeared. The page is still there, but I haven't done anything with it since January. I never have time to put anything on there, and tumblr is really an image-driven medium. I'm not a photographer or graphic artist and I feel uncomfortable posting images that others might have taken or drawn. So I've decided that's not for me.

I've also decided that I'm probably, possibly, maybe, might be, could be, finally done with Listia.

I've cut way, way back on the site the last several months because of the time investment and the aggravation. The only thing that's keeping me from cutting ties completely is I still have card junk that I want to get rid of and it's an excellent place to do that.

So, I'll probably still hang around there a little bit when I have time to unload my card garbage.

In the meantime, these might be the last cards that came from Listia that you'll see here for a long time: 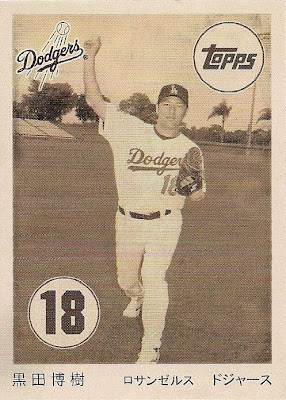 This is a 2008 Topps Trading Card History insert of Hiroki Kuroda. For whatever reason, I never came across this card in 2008. Never saw it ever.

So when this popped up I nearly jumped at the computer screen. I half hoped that the card would consist of some fancy cardboard material or maybe even be made of cloth. But knowing that it was from 2008, I knew better. 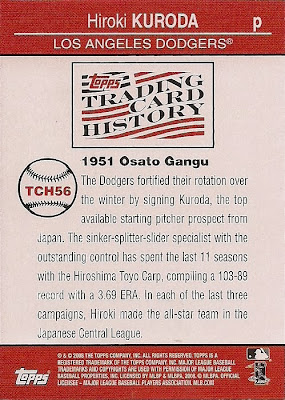 There you go, just another slickly produced tribute card from Topps.

The best Listia part of this is it took 25 days for me to get this card.

After a couple of "hey, did you get eaten by wolves?" type messages to the seller, I finally received my card. But this is a good example of the kind of aggravation that I no longer can handle. 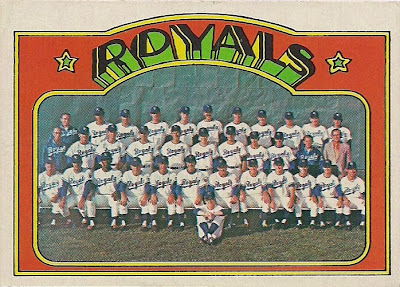 But there's still stuff on that site that makes my heart pitter-pat. This is a semi-high number card from the 1972 Topps set I'm trying to complete.

Normally, vintage stuff is way too many credits on Listia, and the competition is tight. But the best thing about a team card is it's not Ken Griffey Jr. or Tony Gwynn or any of those guys that the whole world chases. I think 80 percent of the collecting world ignores a team card these days.

But to me it's just as valuable as any other card in the '72 set. Even more valuable, because it's card #617, a high number. I nabbed it easily.

Another change that I've already made is altering the tabs at the top of the blog a little bit. I mentioned that I wanted to get the "Legends Of Cardboard" series into the tabs and I've done that (take a look and any suggestions are welcome). It's a series that I think has wheels, that nobody else is doing and I'm interested in it.

That means I bumped the "Bad-ass Club" tab down to the "other features" list on the sidebar. I'm assuming this may disappoint some people, knowing how everybody loves a bad-ass. And, I agree, I do, too.

But what I'm doing with the "bad-ass club" is nothing different than a lot of other people who are reliving the '70s in baseball cards are doing. Half the time I feel like I'm stepping on someone else's toes with this, and I'd like to be semi-original. Plus, the bad-ass posts take a lot of research and, truthfully, I'm a little bored with doing them.

So, it's not gone forever. I'm sure I'll unearth it when the mood hits.

Those are all the changes I want to make right now. I will address one other thing later on, and -- oh boy! -- it involves a poll!

I'm bracing for the fiasco already.

Dave said…
First off, cosmetic changes to your blog aren’t a big deal to this reader… you have content. If you’re blog didn’t have any illustrations, I’d still read it. Second, I never got Lista… look into ebay. Adjust and save your searches (say “T206 Dodgers” and price range of $0-$10) and you’ll be amazed what you’ll find. Cheap Diamond Stars and 1939-1940 Play Balls pop up periodically.
September 25, 2013 at 8:12 PM

J. Meeks said…
I have six cards for your '72 set. They aren't in bad shape, and I'm sure you would enjoy them more than me. If you're interested, email me your address and I will drop them in the mail to you. judsonmeeks AT g mail DOT com.
September 25, 2013 at 8:56 PM

defgav said…
Didn't you say you were wanting a new header but not motivated to make one or something? Make it a contest! Readers whip something up for you and the one you like best gets used and maybe you throw the designer a few free cards.
September 26, 2013 at 12:16 PM

Ana Lu said…
Still with 3 blogs plus twitter you keep doing well!
Never knew that Topps would make a japanese card for Kuroda. Is it an insert? Fuji might now it says on the front.
September 26, 2013 at 2:38 PM