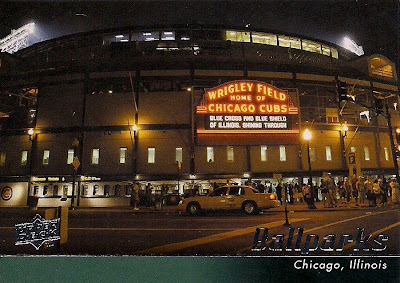 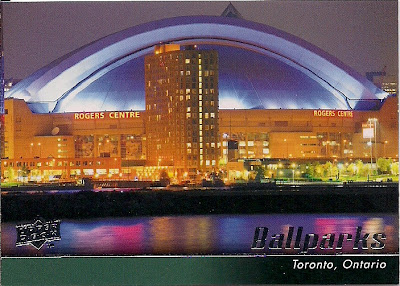 For the second time only, I am featuring two awesome night cards on one post.

This is because I can't stand either of these cards sitting in my "to be blogged about stack" any longer. They're just too awesome, and I need to know whether they get to go in the night card binder.

To me, the team stadium cards are the only redeeming element of the aborted 2010 Upper Deck set. Long after the set is forgotten forever -- if it hasn't been already -- I will remember these cards.

To my knowledge, these are two of the three stadiums in the set are pictured at night. The other is Fenway Park, which I need to get. (Seattle's stadium is a "dusk card.").

I have attended one game in the Rogers Centre (then known as Skydome). I should have attended more, including the very first one.

I have never been to Wrigley Field. But I did drive past it once. I was driving with a crowd of friends in one car on some main highway desperately trying to keep up with another pack of friends in another car who knew where they were going, all in bumper-to-bumper lunchtime traffic. Somewhere in my frantic bid to avoid being lost forever on an endless loop in Chicago, I saw a road sign for Wrigley Field, and then knew that I had passed it (Looking back, I guess I was on Lake Shore Drive but didn't know it at the time).

It was a lot easier getting around in Toronto than Chicago. And Toronto was no beach party.

But both places were a hell of a lot of fun.

And that's the best part of these two cards, and all stadium cards, really: the memories.

JediJeff said…
If you were on LSD, you were about a mile east of Wrigley.

zman40 said…
If you were on LSD, there is no telling how close you were to Wrigley.