Sorting and storage (I am not a pack rat!) 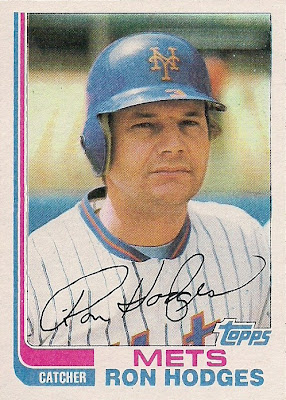 A couple of online conversations both on the blogs and Twitter recently have made me think a little bit about my persistent battle to avoid being known as a pack rat.

I admit there's a little pack rat in me. I'm a collector, it's part of the job description.

But I try to keep the accumulation mostly to pieces of cardboard -- the right size of cardboard -- and limit everything else. I also try to store items in a way that makes sense, both to me and to other people who live with me.

I've addressed my sorting and storage habits in past posts. But I don't think I've done it all at one time, in a single post. So I'm going to do that here.

I don't really expect it to help anyone. It's not a perfect system. As far as bloggers, some are more organized and some are less (I'm sure you know who is who, I don't need to name names). But it's ideal for me.

My glorious roll top card desk is the sorting station. When packages come in from the mailbox, this is where they go.

On the left side of the card desk sit piles of cards that I have extracted from packages. They need to be scanned and I need to write a proper ode to them. They sit there in their team bags, with notes attached, sometimes with the envelopes still underneath the cards, in case there's an address I haven't recorded yet. I try to keep the card piles to no more than nine, but you know how that goes. Right now it's a very manageable five -- mostly because I haven't been transacting lately (I expect to be mailing packages out next week).

In the middle of the desk are cards that are for blog posts. They're not from trades. Usually they're for my set blogs, but sometimes they're for NOC posts that may or may not ever see the light of day (currently, Rickey Henderson's rookie is sitting in the middle of the desk -- it's looking less likely that it will be part of a post, which means I have to get it stored tout suite).

There are shelves on the top of the desk and that's where more sorting comes into play. On the shelves on the left are Dodger cards that need to be placed into binders. In most cases I've already organized them by year (although sometimes not). They've also already been cataloged.

On the middle shelf are cards that need to be cataloged. I regret to say that all of my cataloging is now computerized. I'd like to have a pen-and-paper system just as a backup, but I don't have time for that. I could print my computer document but it looks like this: 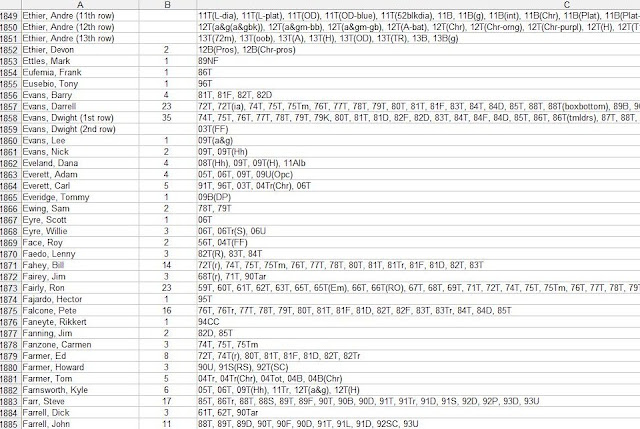 I know there are much better ways. But I've just never bothered with them. I don't really have a desire to feature my collection online (other than with this blog), so I've skipped the Zistle and sportscard album sites. I could change it up one day. But the thought of overhauling everything I've done is so odious, I don't see myself doing it.

Cards are cataloged and then sent to storage. Dodger cards go to the shelf on the left to be sent to binders eventually. Non-Dodgers head to the card room to be stored in various ways, which you'll see when I get to that point.

The middle shelf also contains some random cards that I want to discard. They're not decent enough for trade fodder, which means I'll put them on Listia. But I've been very lax on Listia the last few months for various reasons, so who knows if I'll ever get to them.

The shelf on the right is larger than the other two. I throw my notebooks full of card ideas in there. Any blog research or notation goes on those notebooks, too. The handy-dandy Standard Catalog of Baseball Cards CD is there, too, along with flyers for future card shows and, for whatever reason, my phone charger.

I really should take a picture of this desk someday, but for now, you just get to fantasize.

My main vehicle for storing is binders. It was a new innovation when I was open to innovations so that's what I've stuck with ever since (it's also why I still have a soft spot for compact disc players).

I just counted my binders. I have 57. They house a variety of kinds of cards. 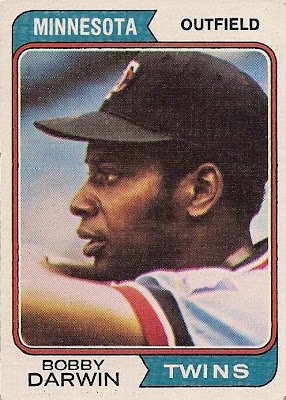 I've also reserved a couple of binders for sets that I may never complete, but for which I have a soft spot.

There is one for some random small Upper Deck sets and another for Kellogg's cards. 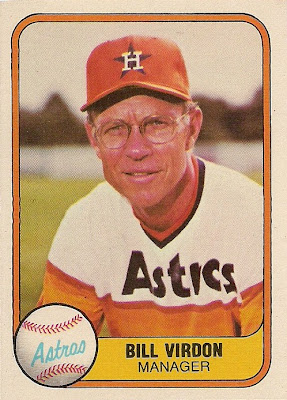 I have one devoted just to the summer of 1981 and 1982 when Fleer and Donruss first showed up on the scene (well, Fleer was there once before, but you know what I mean). 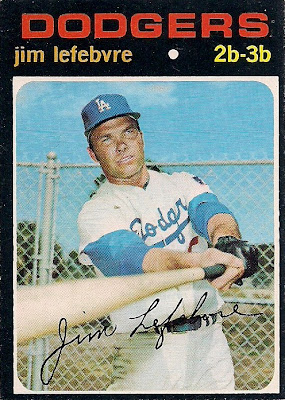 The other binders are reserved for my Dodger cards. In fact, I have more Dodger cards devoted to binders than any other kind of cards. I have 19 binders for Dodgers and if you're a unique Dodger card, I guarantee that you have a spot in a binder.

A select few football/hockey/nonsports cards are assembled in one very beat-up binder, confined to the basement. I should really treat those cards better, but truthfully, baseball is up here ...

As for the rest of my cards, they go into boxes.

I don't have a single complete set stored in a box. I don't consider that a suitable enough display for a complete set. But there are lots of sets for which I have many cards that are stored in boxes. 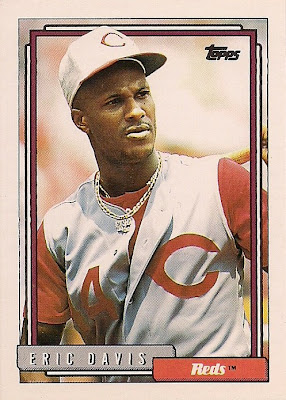 Sets like 1987 and 1992 Topps are in a box (no I don't ever intend on completing either). And the vast majority of non-Topps sets are in boxes. Items like 1983-95 Fleer are in boxes. Junk wax Donruss gets the box treatment. Almost all Upper Deck, unless it's a set I like a lot like the 2001 Upper Deck Decade 70s set, is in boxes.

Flair, Pacific, Circa, Metal, Conlon Collection, Bowman and a number of 1990s Topps sets are in boxes.

I feel sorry for some of these boxed sets and maybe one day I'll feature them in a binder. Sets like 1984 Fleer and, stunningly enough, 1989 Donruss may one day get the binder treatment. But a number of sets will always stay in boxes.

One great thing about boxes is the easy access. I'd say 90 percent of the cards that I send to people come from boxes and I have no problem finding them.

All of my boxes are ordered by manufacturer and then by year and then by team. A couple of sets I stupidly ordered by number and I had to put an end to that. Who memorizes the card number unless it's 1975 Topps? 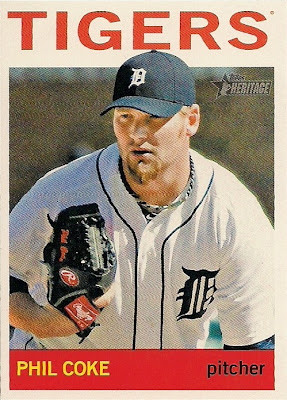 There are some cards that are not in binders or boxes but only very few because, remember, I AM NOT A PACK RAT!

This year's cards I always leave out on a desk. The potential of these cards as trade bait are very great. So I need easy access. These cards are also prime material for blog posts. And as the latest and greatest, I'm going to want to look through them periodically.

I also leave out non-Dodger cards/non-complete set quest cards that will eventually go in my Topps all-inclusive binder (the one where I mentioned 1969 Topps, 1973 Topps, etc.). I just added cards to that binder, so right now there is no stack for those cards.

I really hate having those out in the open, especially since I value them so. But I don't have the heart to put them in oversized page pockets -- it just looks terrible. So they sit in silent vigil, waiting for the day when UltraPro manufactures a page just for them. 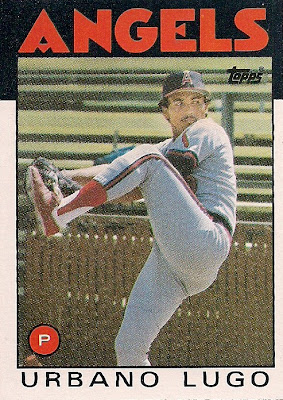 I haven't written about doubles yet.

That's because I trade with many people, so my double inventory is very low.

I definitely DO have a ton of Dodger card doubles. If you want Dodger cards, I'm your man. Just ask. Please. My Dodger doubles sit in a very large box under a desk. But it's not large enough to house all of them. So the overflow Dodger dupes sit in large stacks on top of the box. One day I am going to have to go through one of those dupe organizing/purgings that I hate so much. You'll hear me whine about that.

As for non-Dodger dupes? They all fit in a wide shoebox that I keep in a closet. There really aren't many. Maybe 600-700? But some still come in handy. But again, keeping doubles to a minimum helps me keep away the pack rats. 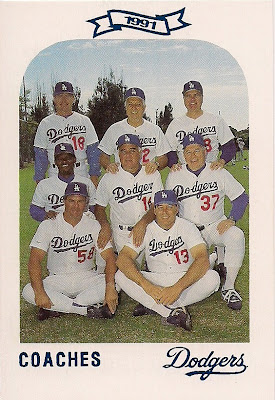 The only "junk box" -- and I don't like using that term -- is a box in the basement. It has a wide assortment of items: 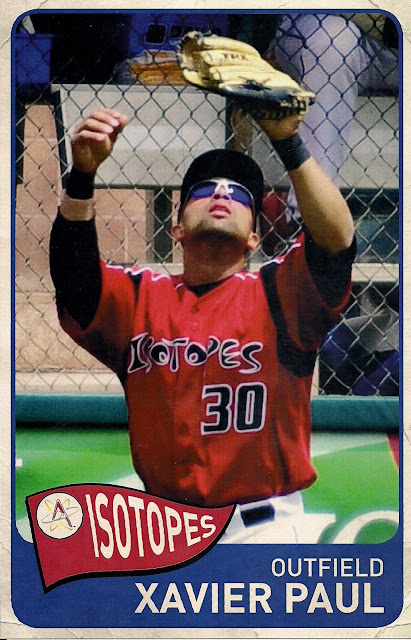 A number of oversized cards are in a binder by themselves. But I can't fit all of them in there. So, sadly, they're in this box. My favorite of these might be these Isotopes cards from 2010 that I received from Kris of Cards In The Attic. 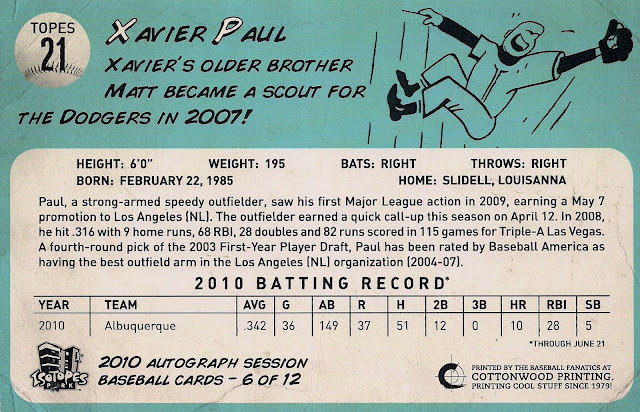 The backs are very cool, too. 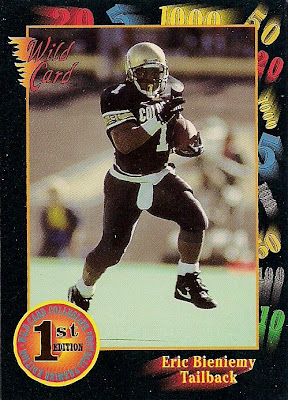 Non-baseball cards, mostly football and hockey but also basketball, tennis and a few others, are in the box, too. Some day I will find a binder for my favorite non-baseball cards. They do not deserve the "box in the basement" banishment. But for now, that's where they live.


And that's how I sort and store.

It works for me.

And it keeps me from thinking that I'm a pack rat. Even if I really am.

And for those of you who made it through all of that, here's a floating head card of Frank Robinson that I received in the mail just the other day: 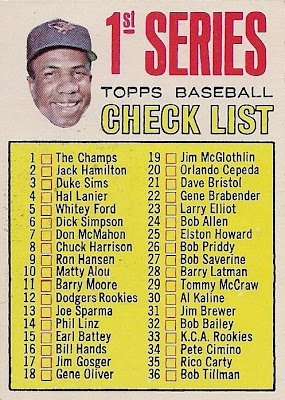 Swing And A Pop-up said…
Very few doubles? I have 18 3200 count boxes of doubles (I just counted).
I probably could have purchased a small village with the money I've spent on cards.
September 6, 2013 at 8:27 PM

night owl said…
I get rid of most of my doubles through trades. But every five years or so, I do a purge and sell them off. The only thing I don't do that for is Dodgers. I can't bear it for some reason.
September 6, 2013 at 8:40 PM

night owl said…
You guys have some unholy obsession with those things. Send them to me and I'll play batting practice with them.
September 7, 2013 at 1:20 AM

Scott Crawford said…
Also: on the subject of albums vs. boxes, I have a hard time putting things in albums sometimes, as an album plus 100 pages (no, I don't double-side my pages) costs around $25 if you shop around, and that brings the cost of storing a complete set up significantly. 3200 count boxes also store over 3 times as many cards as an album with only a slightly bigger footprint. Yes, you have to pull stacks of cards out and/or leaf through them, but you're also less likely to go broke storing this stuff.

Maybe I'm just bitter about the one time that a shelf inexplicably upended, flinging 5 UltraPro binders onto the floor and destroying the d-rings on all of them. That was expensive. I still need to replace 3 of those binders.
September 7, 2013 at 1:26 AM

View From the Skybox said…
Check out cardsone.com for a good deal on binders and pages. They buy out junk wax collections so they have tons used supplies. You can buy binders full of pages with cards still in the pages for less than the price of a new 3" binder alone.
September 7, 2013 at 3:42 PM