Minis come to their rightful owner 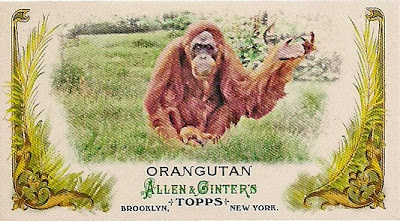 As you know, there are quite a few Dodger collectors on the blogs (when I started there were two). They show all their Dodger card acquisitions, and I'm fine with that, except for the part of me that cries in the night, "those should be MIIIIIINNNNNE!"

Also from time to time, I see someone boasting about something that they acquired that is right smack in the middle of my collecting interests. A Kellogg's 3-D card, or a '75 mini, or a shiny Kershaw insert.

Those collectors have the right to those cards. But we all know where they really belong.

Unfortunately, this is life and things never work out as they should. Not even in card collecting. There is no world peace. Coffee smells great and tastes like tires. Pee Wee's Playhouse hasn't been on my TV for years.

But every once in awhile, the stars align, people of all races and creeds put aside their petty differences, and cards that have night owl written all over them do meet their destiny.

Such a moment happened a few weeks ago when Daniel of It's Like Having My Own Card Shop was giving away a bunch of tobacco-style minis. He spun the randomizer and -- miracle of miracle -- I won the cards.

Imagine that, minis going to me.

I think I've mentioned enjoying minis a time or two.

The best part was getting this card: 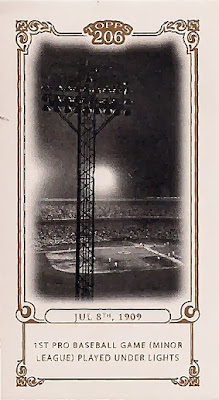 As you know (or maybe you don't know as nobody commented on this post), I want every one of these cards. It's a mini of the first pro game played under lights. It should gravitate toward me automatically. Like a rule of nature.

So after receiving this card -- appropriately housed in one of those great mini top-loaders -- I am now able to do this:

Granted, that's only one-third of a mini page, but I'm not showing the other empty pockets. That'll just make me sad.

And this is a celebratory post! The mini lost sheep came to MEEEEEEEEEEEEEE!!!!!!!!!

As for the other minis, some of them were candidates for my A&G frankenset binder and some were not. Let's look at the ones that made the binder: 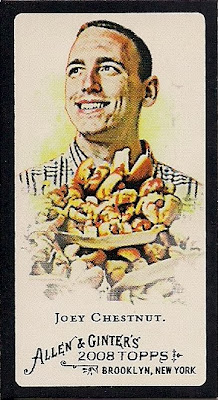 Not happy about having the hot dog glutton included. I start to feel nauseous halfway through my second hot dog. But it does give the frankenset binder character, and that's what I'm going for. 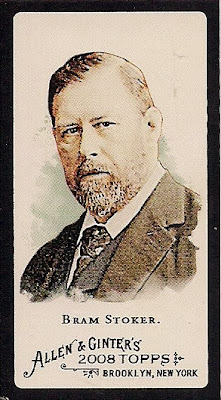 A writer almost always gets a free pass in this binder. Bram is an inspiration, too, as "Dracula" was written at age 50. 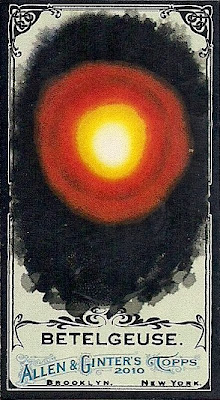 This card should glow in the dark. But I'm not holding that fail against Betelgeuse. 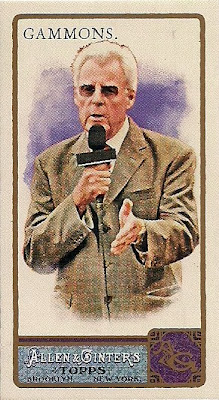 Gammons is great. He did terrific work when writers were writers, when Sports Illustrated was the king of my library breaks in high school, and when articles were fascinating, informative and well-crafted stories, not an assemblage of words ripped for being "narratives."

It will be almost impossible to knock him out out of the binder.

Only two of the numbered minis I received did not make it: 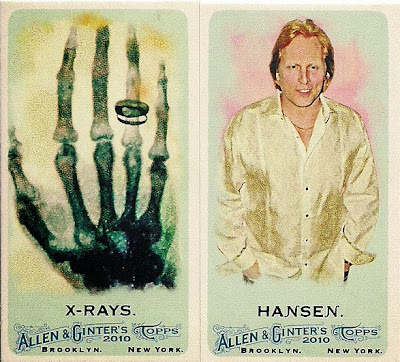 Mr. Bony had his way blocked by the black-bordered version of that card. Sig Hansen is eventually on its way to apparent Deadliest Catch fan Dawgbones.

As for the other cards that don't quite fit in the frankenset binder, I'll probably keep a couple of them. The orangutan at the top of the post is just too wonderful to let go. 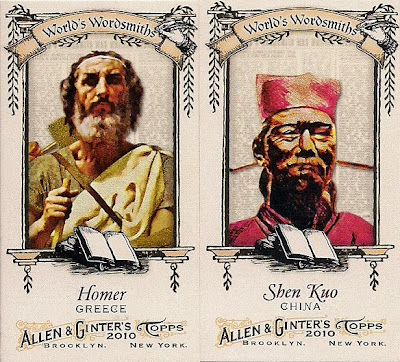 I don't really collect any A&G insert sets, but the World's Wordsmiths from a few years back was a thought then. Might as well keep it that way. 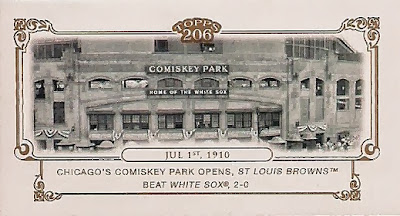 As for the rest of the minis: 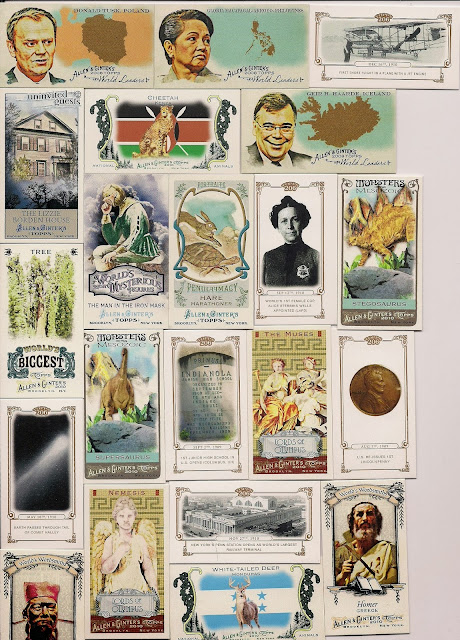 They are available. If you're collecting a particular insert set, let me know, and I'll set them aside for you.

Daniel also added some Dodgers to the prize package, which is great, because I have had Diamondbacks burning a hole in my "get rid of these" stack for a long time.

Here are some key ones: 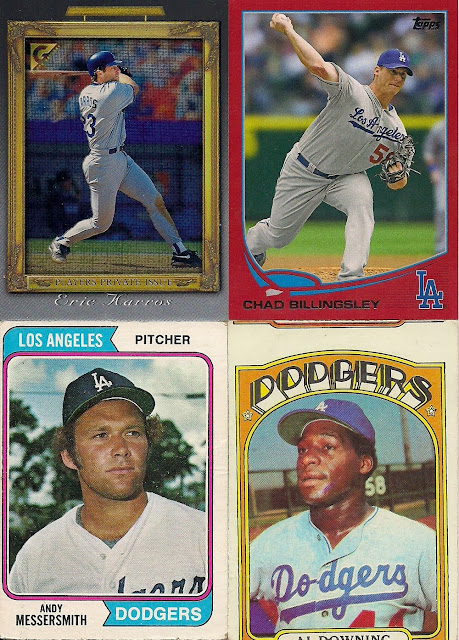 I have seen lots of versions of the '72 Al Downing card miscut from left-to-right, but this is the first top-to-bottom one in my collection. Good stuff. 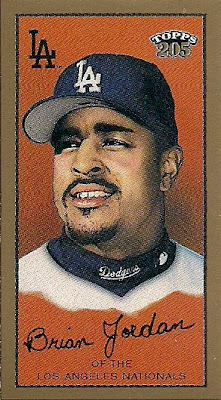 And, look! He even had a mini Dodger to spare.

But the best part of this whole thing was that this shows that sometimes what's meant to be actually comes to pass.

shoeboxlegends said…
I've always liked that Bram Stoker card. I could use both of those Monsters of the Mesozoic minis, if you want to set them to the side I can see if I've got anything nice to send you in exchange?
September 26, 2013 at 8:47 PM

Anonymous said…
I'm glad to know that I'm not the only one who enjoys the smell of coffee, but not the taste.

Play at the Plate said…
I thought I was the only one! I love the smell of fresh ground coffee or brewed coffee. CANNOT stand the taste.

Dawgbones said…
I like the taste of good brewed coffee, but it will NEVER equal the smell of fresh ground beans!!
September 27, 2013 at 7:00 AM

Daniel Wilson said…
Congrats! Glad to see that you could use some of them and it looks like the others will find a good home as well.
September 27, 2013 at 7:57 PM

madding said…
I'm definitely interested in these minis unless they're already claimed: