September 16, 2013
(Today is Collect Rocks Day. I used to collect rocks. As a kid, I once purchased some polished rocks at a gift shop during a trip to Vermont. It was my prized possession for about a week. I soon decided I liked collecting cards better. Which is good because "Night Owl Rocks" would never fly. Time for Cardboard Appreciation. This is the 187th in a series): 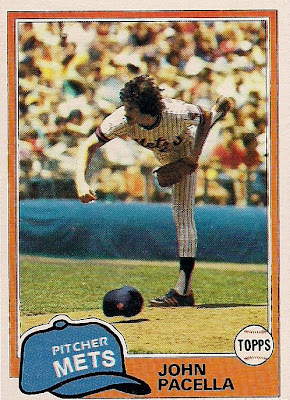 I know nobody under the age of 35 has heard of him and probably has already clicked off this post. But you should have heard of him. He's been featured on the blogs a time or two or three. I even commented on a couple of those posts.

Anyway, on the occasion of Pacella's 57th birthday, I scrambled to find the 1981 Topps Pacella card that I no doubt featured on my blog previously only to realize that I'VE NEVER SHOWN IT.

The best part of this card, of course, is the cap falling to the mound in the photo. And the punch line on the back: 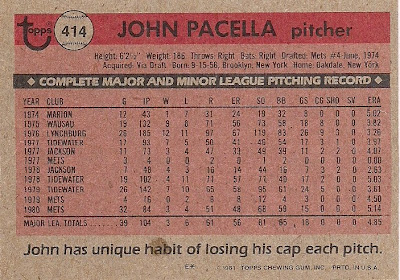 Fantastic, no? Depending on whether you saw John Pacella pitch or not, that single-sentence bio will produce either a knowing or incredulous laugh.

I remember watching one of Pacella's first games on TV. The Mets announcers were beside themselves with Pacella's inability to keep the cap on his head. I don't know if it happened every pitch, for the six years that he played in the major leagues. But it did indeed happen.

But for me, the very best part of this card, is that the picture on the front depicts something for which the player was known.

This is nothing to people who grew up with Upper Deck, Collector's Choice or even Fleer. If a player had an interesting on-field habit, quirk or ritual, there's no doubt a card company would capture it (think Turk Wendell brushing his teeth).

But this didn't happen when I was a kid collecting cards. How I longed to see a card of Mark Fidrych talking to the ball, Joe Morgan flapping his elbow like a chicken, or even Wade Boggs simply eating chicken.

But I would open my cards and instead, Fidrych would be smiling for the camera in a dorky pose, Morgan would be swinging a bat, and Boggs would be watching an opposite-field drive to left. And there is nothing wrong with those images. I love those images.

It's just that I actually SAW Fidrych talk to the ball THERE OUT ON THE MOUND. I wanted to see it on a card.

Fortunately, thanks to retro sets and adult collectors reliving their childhood, we do have those images of '70s players doing what they were known to do. Fidrych smoothing the mound dirt. Pete Rose diving head first into a base. Luis Tiant turning his back to the batter in mid wind-up (I'd still like a card of Al Hrabosky punching his glove behind the mound before a pitch).

But this is what made the Pacella card great.

Topps caught him in the act that made him famous a mere two years into his career.

That's what makes a card worth appreciating.