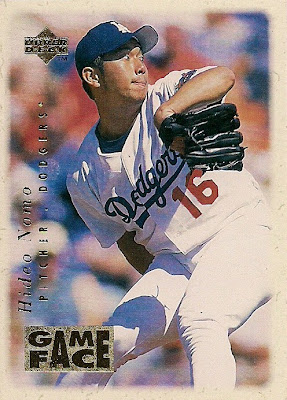 I've been doing a lot of remembering and ranting lately. I think that's because I'm not buying any cards right now and that's about all I've got in the repertoire.

I know that most of you come here to see cards though, and it's about time I show some. A number of people have sent me cards "just because" lately and that kind of behavior needs to be rewarded.

So I'm going to take a leisurely stroll through some baseball cards because, after all, all anyone is doing today is sitting around by the grill, drinking beer and watching baseball, right? Nobody is actually WORKING today.

"That night owl is so sour." 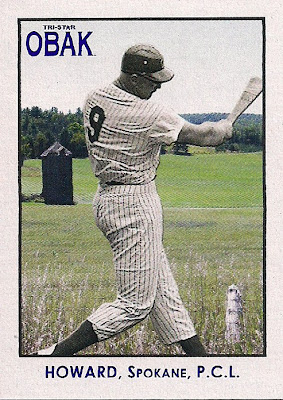 The first assortment is from Spiff at Texas Rangers Cards. He was one of my first trades back when I was a wee little owl. I haven't heard from him in a bit so it was nice to see a package of Dodgers with his name on it. He sent it just because he was clearing out after the big move. 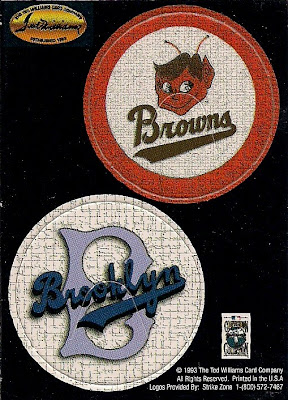 This was the Ted Williams Company trying to capitalize on the pogs craze of the early 1990s. A nice item, but this reminds me that those Topps Chipz things that you're seeing in stores these days are really pogs! They're trying to get you hooked like little pog addicts. Don't do it! 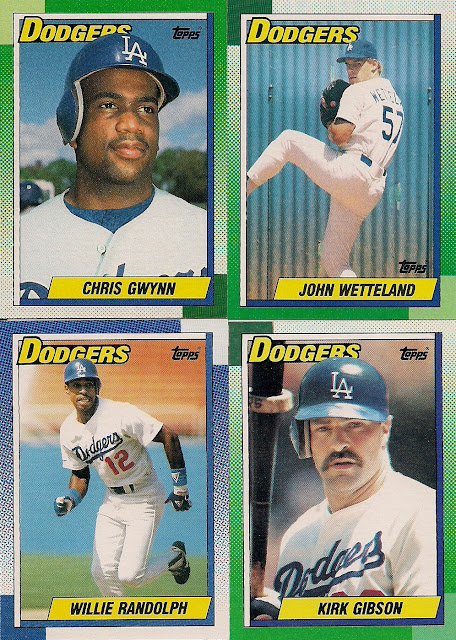 Yes, I have my fill of 1990 Topps Dodgers. But these cards made me think that I wouldn't mind completing this set one day -- DON'T SEND ME YOUR 1990 TOPPS CARDS. By "one day" I mean when I have finished all other set completion tasks and after I have tripped and fallen on my head in the nursing home. Then, and only then "one day" will come. 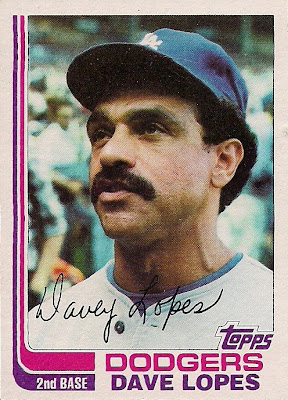 Never has the jugular vein been featured more prominently on a baseball card. Normally I do research on this before saying such a thing but -- hell, I'm always in need of future post material, right? 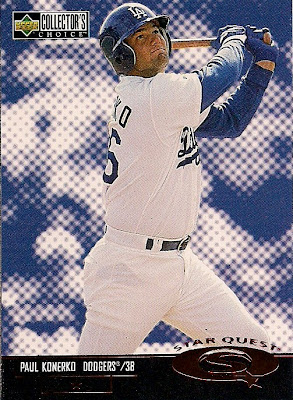 I now have 69 different cards of Paul Konerko as a Dodger. Did he play for any other team? 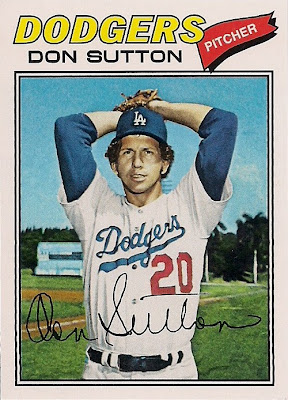 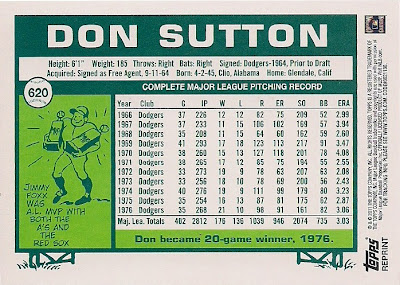 A 60 Years Of Topps card, original-back version. We really fell for this nonsense. 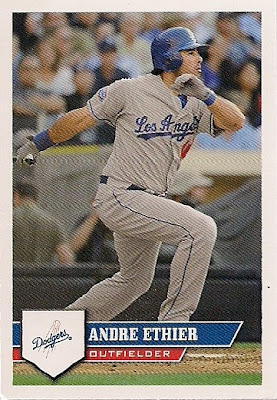 This may be the last Dodger sticker I need from the 2011 sticker set. I don't plan on finding out for sure. I don't have time for stickers.

Thanks a bunch, Spiff, for all those cards. I hope you're finally getting settled. I've saved the new address so expect some cards ... someday. 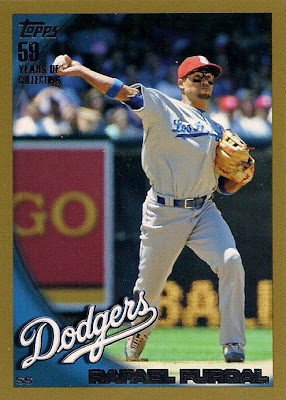 The next "just because" package comes from Steve at The Card Chop. He had sent me some cards a little while ago, and then another package appeared from him soon afterward.

Normally, I would puzzle about such an occurrence. But I know that he had to send a nice stack of cards, so that he could protect this card: 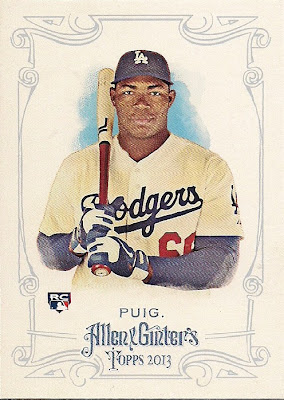 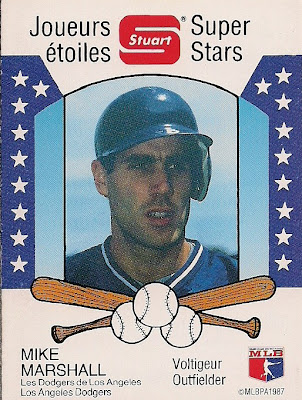 You can't beat oddball, nonlicensed cards with "voltigeur" on the front. That's a terrific trifecta.

I am not familiar with Stuart, whatever store that may be, which is a shame because I pride myself on knowledge of Canadian merchandisers.

This was sent to me by Jason, who contacted me just because he thought I might like it. He's very observant.

This is actually a panel that when you fold it out reveals: 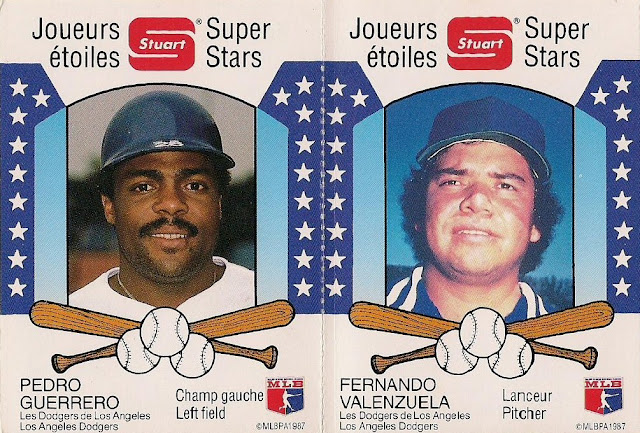 I don't really see why Mike Marshall gets top billing here. I may have to refold to rectify this situation.

If you flip the panel over you get all of their pertinent stats and lots more French.

There is also a sweepstakes form that you could have mailed off if this was 1987.

But since it's not, let's see what we could have won: 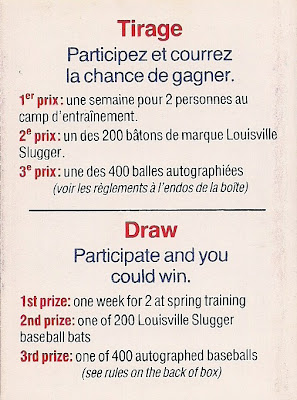 That first prize would have been sweet. I could have seen Kirk Gibson flip out at Dodger camp in 1988!

Thanks very much, Jason. I will keep the panel intact always. 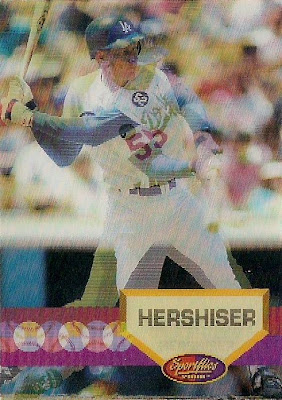 I don't do a lot of them on there, but I've liked what I've done. The following cards came from Matthew who was just happy to get some cards in the hand of someone who wanted them.

This Orel Hershiser Sportflics card scanned nicely because I placed it vertically.

This is what happens when you place the card horizontal: 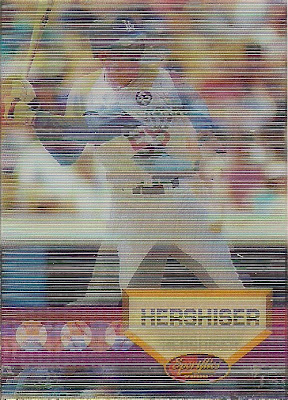 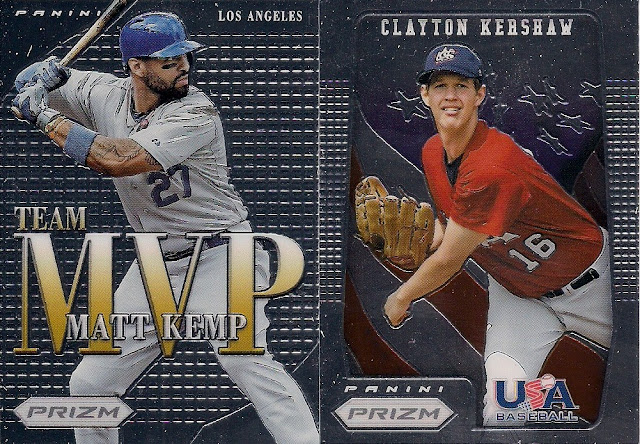 It almost takes your mind of the fact that numbers on the front of the Dodgers' jerseys ARE NOT BLUE. 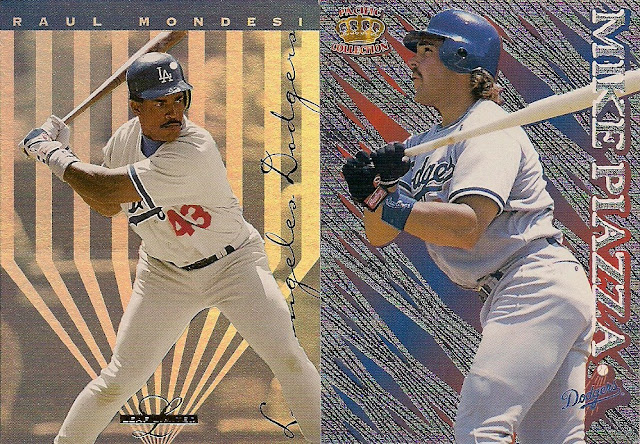 The majority of the cards from Matthew were '90s items like these very cool cards. 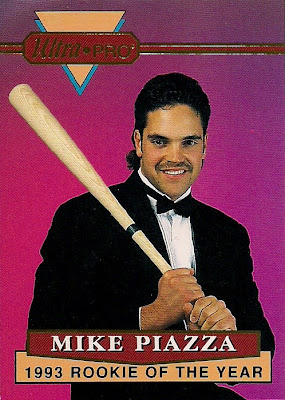 But the '90s were also very strange, and I don't mean in a good way. I mean strange in an uncomfortable, skin-crawly "what is WRONG with people?" way. 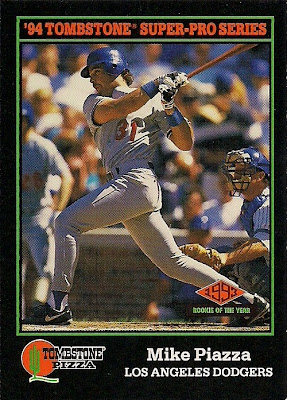 This was the best card of the lot. Just fantastic. Food cards rule. I don't even care if frozen pizza is the most depressing food item that was ever created. This card is spectacular. 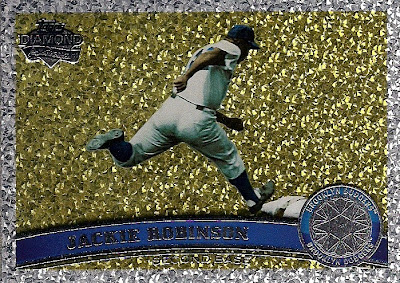 The last few cards are from Jeffrey at Cardboard Catastrophes, who might send more "just because" packages than any other person I know.

He sent some other cards that I'm saving for a separate post, but I'll let you see this super sparkly diamond Jackie Robinson shortprint. It's a very odd photo. But it's not the same Jackie picture you keep seeing, so I will be zipping my lip. 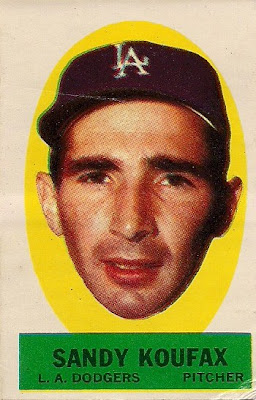 This great piece of paper totally threw me. At first I thought it was Koufax's 1966 Topps Rub-Off and I got all excited because that would mean I would have two of them and I could rub one on the dog and we could impress the whole town with the dog's Koufax-shaped "birthmark."

It's from the 1963 Topps Peel-Off set, which for some reason I barely knew existed. This Koufax is also blank-backed (as opposed to have instructions on the back), which my Standard Catalog of Baseball Cards tells me is much rarer.

Suddenly, Labor Day is looking up. 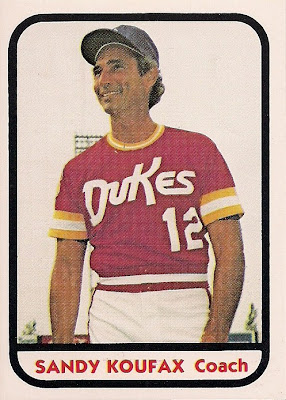 Best for last. You can't wipe the smile off my face after seeing this card.

Koufax was a pitching coach in the Dodgers' minor league system from the late '70s to the early '90s. Seeing him in the old Dukes' red-and-gold uniform is fantastic. It's an iconic player in an iconic uniform but not the one that you expect to see on him.

I think I need to start an alternate Greatest 100 Dodger Cards Of All-Time and feature cards of Dodgers who aren't wearing Dodger uniforms. This will be No. 1.

Thanks a whole lot, Jeffrey. You've got some mighty nice card shows where you live.

And I hope you all appreciated me babbling about cards.

I really do enjoy doing that more than anything else.

Play at the Plate said…
That is one great assortment of cards. I'm wondering if postal employees hate all of us even though bloggers/traders probably account for about 1/4 of the post office revenue.
September 2, 2013 at 9:34 PM