Finding a Clark of my own I believe all baseball fans have read about what Jack Clark said about Albert Pujols on the radio last month. He claimed that Pujols was injected with PEDs and Pujols denied it and threatened to sue. Clark also made veiled insinuations about Justin Verlander and one of my Dodger favorites, Shawn Green.

Clark and his show were booted from the airwaves shortly thereafter, and whether you agree or disagree with the move -- freedom of speech and all that -- I don't care. Because I don't like Jack Clark. Never have.

Clark was a beacon of hope for Giants fans when he debuted in the late 1970s. The Giants sucked then, as they always should, and Clark had talent. But Clark also had a loud mouth. He got in disagreements with manager Frank Robinson and some of his teammates. Later, with the Cardinals, he argued with Ozzie Smith, and later Tony Gwynn, and later there was bankruptcy over his nonstop accumulation of luxury vehicles, and later there was his inability to get the Dodgers to hit -- as the Dodgers' batting coach.

Oh, and there was that home run against the Dodgers in Game 6 of the 1985 NLCS. I've ranted about that a few times. I won't link them. It's too painful. 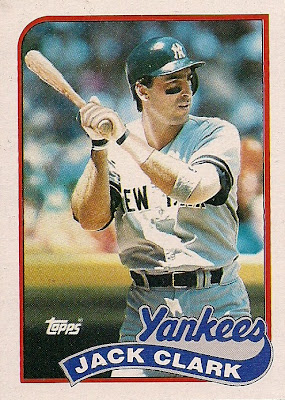 He also had to go and play for the Yankees, too. Of course.

In short, Clark has found ways for 35 years now to irritate me. But I'm sure he's a hero to mid-1980s Cardinals fans.

This isn't the only Clark to have annoyed me over the years. 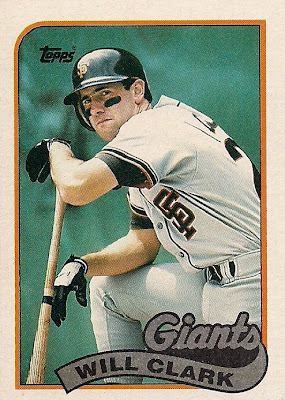 I know three-quarters of the blogosphere loves this card. I'll chalk it up to being young and not knowing any better. Will Clark is evil.

This was another Clark that the Giants sent after the Dodgers. I will give Clark all the credit for being a terrific player who worked hard at his craft and was very serious about it. But I didn't like him, I didn't like his shrill voice, and I always had a hunch he was a jerk and it turns out I'm probably right. (Cubs fans have never been happy with him either -- might be the only time I've agreed with Cubs fans).

So they have their Clark, too.

(Side note: San Francisco sent yet another Clark to destroy the Dallas Cowboys).

The worst part of this is that I'd love to get rid of all my Jack Clarks and my Will Clarks, but I can't because I decided to become a stupid set collector and they fill a slot in the set. So there they sit. And I still don't have a Clark to call my own.

So I went to my collection to find one. Someone I could show with pride when asked who my favorite Clark was.

But first I had to eliminate a lot of incidentals: 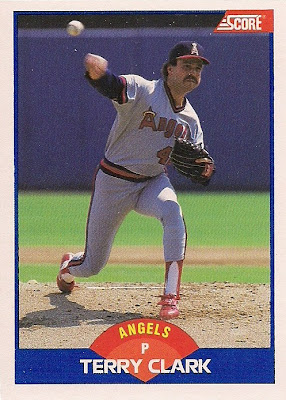 Terry Clark: A reliever with a career 5.84 ERA who spent nine years in the minors before reaching the big leagues. Sorry, won't do. 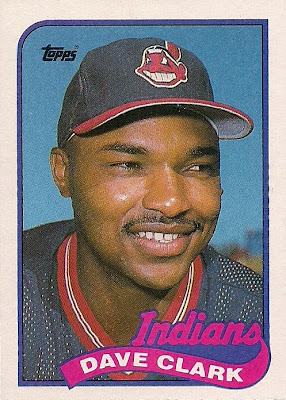 Dave Clark: A part-time player who lasted 13 years in the majors with a variety of teams. But I think I pulled this card 30 different times in 1989. Next.

Rickey Clark: A marginal hurler for the late '60s/early '70s Angels. This is a super high number in the 1971 set, which are difficult to find, cost a lot. I hold a grudge against cards like this. Moving on. 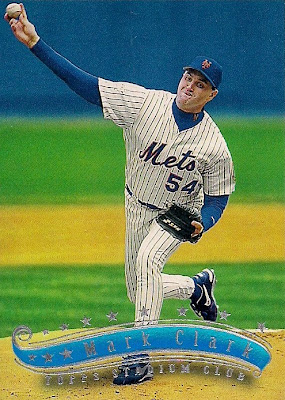 Mark Clark: He will forever be remembered by me from a Sports Illustrated article about how even No. 5 pitchers these days live a life of luxury with today's salaries. The article blew me away. "Who the heck is Mark Clark?" I believe is what I said. Next card. 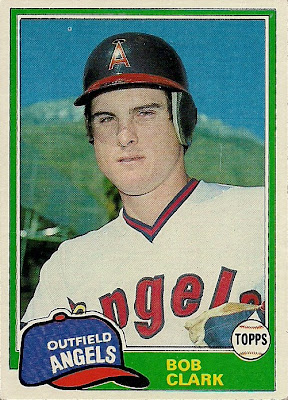 Bob Clark: Another part-time player for the Angels and the Brewers. He always seemed to be wearing a very high batting helmet in his photos. 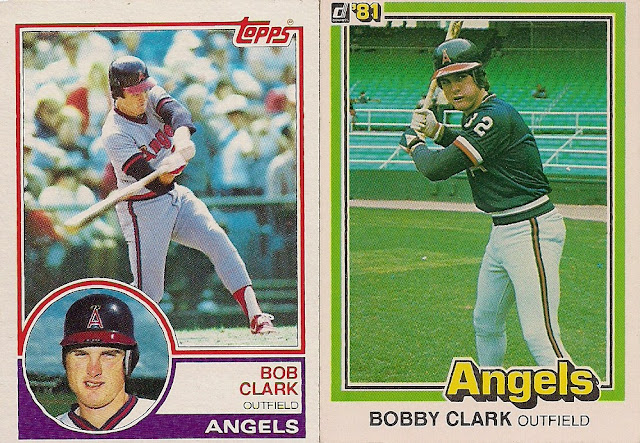 Perhaps there was a legitimate reason for this, but it bothered me as a youngster. I'm sorry, it just did. We all have our hang-ups. Next. 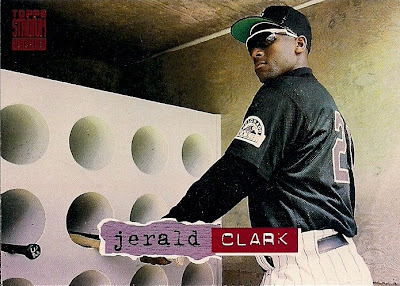 Jerald Clark: Speaking of hang-ups, have you ever heard of trypophobia? Don't click this if honeycombs and other clustered holes make your skin crawl.  This card is reminiscent of that. I'm not really bothered by it but I can't have Clark bothering others. Onward we go. 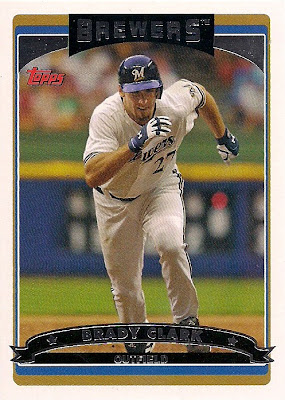 Brady Clark: OKish player for the Brewers, then he went to the Dodgers and didn't do nada. That's not my Clark. Is there anybody who will be my Clark? 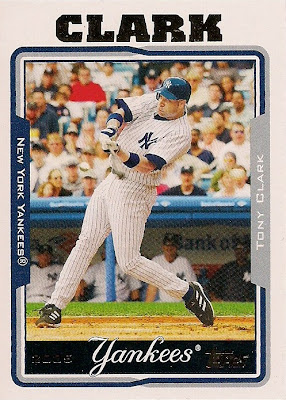 Tony Clark: I hear Tony's a nice guy. But playing with the Yankees and the Diamondbacks is not cool. The search continues. 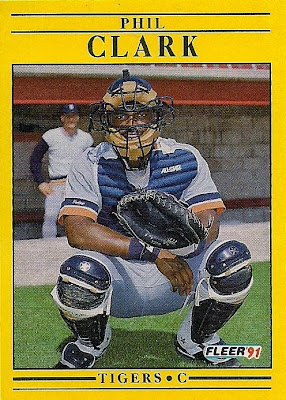 Phil Clark: Awesome photo. Even on '91 Fleer. But he spent most of his career with the Padres. No. 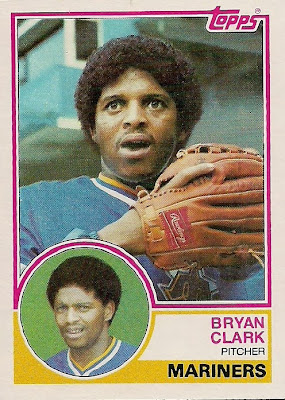 Bryan Clark: First, I love this card. In the top photo, Clark looks like he's seen a ghost. In the bottom photo he's all like, "I knew it wasn't really a ghost." I wanted to make this my favorite Clark player, but "mid-1980s reliever for the Mariners" just doesn't have a ring to it.

Besides, I found this guy: 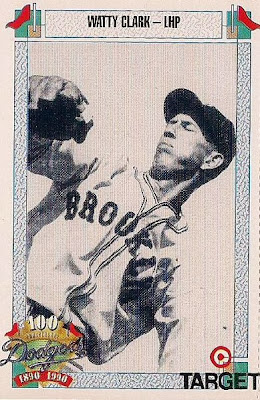 Watty Clark: He is the Clark for me. The reasons:

1. He's a Brooklyn Dodger
2. He's a left-hander
3. He had two nicknames, "Watty" and "Lefty"
4. His full name was "William Watson Clark." It doesn't have the magnificence of William Wallison Horton, but it's close enough.
5. He won 20 games for the Dodgers in 1932, a season that was known as "year of the hitter."
6. He was traded to the Giants in 1933 but did not play during the Giants' World Series championship and was reacquired by the Dodgers in 1934. I choose to interpret that as he hated the Giants, refused to play for them in the Series, and demanded to go back to the Dodgers.
7. He pitched until 1937, yet there are records that say he quit playing in 1933.

What kind of records?

Well, his obituary for one: 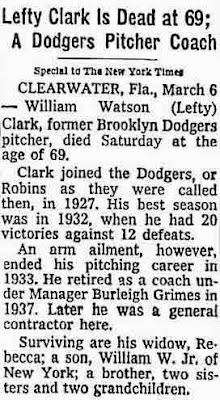 So that's enough for me to claim Watty Clark as a Clark of my own.

I will soon begin the quest of obtaining his Goudey card(s) from that period. I'm guessing those are the only other Watty Clark cards around.

But I have to do that. I have to balance out all the misery that Jack and Will have left these many years.

Dave said…
…and congratulations on your playoff berth! A healthy 17 game gap between LA and evil orange!
September 19, 2013 at 9:08 PM

steelehere said…
Clark is one name that should just be left for the Entertainment industry (Clark Gable, Clark Griswold, Clark Kent)
September 19, 2013 at 10:08 PM

night owl said…
They were pretty boring if I remember right. Kind of like a less flashy Zagnut bar.
September 19, 2013 at 10:43 PM

jacobmrley said…
If you checked the little hidden links in my post this evening, you will see that Jack Clark was/is on my eternal shit list. Seriously, what a jackass.
September 19, 2013 at 11:55 PM

mr haverkamp said…
Congrats on being the first clinch.....keep the title residing in the NL West! I kind of figured you wouldn't be real fond of Jack after that 500-ft homer off of Need-en-food in 1985. I'd be interested in reading about his forays into owning a drag racing team and spending money on more houses than he could have ever resided in his entire life.
September 20, 2013 at 1:56 AM

Play at the Plate said…
It took me all of 6 posts back in 2009 to profess Will Clark as my favorite player. I always admired his tenacity, his effort and how he took every loss as a personal affront. I'm trying to wrap my head around the confrontation with the writer and decide if he was offended at the perception that the writer had done a hack job on Rocker (or any player) or if he's defending Rocker the person. That's not sitting well with me...confusion reigns.
September 20, 2013 at 4:38 AM

Robert said…
I'm surprised that in this red, white and blue nation that nobody has brought up Clark Kent.
September 20, 2013 at 1:17 PM