No, I am not ready for some football, thanks for asking 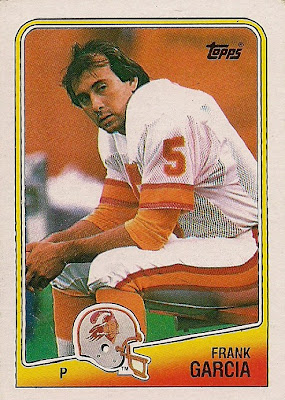 When I turned the TV on this afternoon, the first play of the NFL season that I saw was the quarterback for my Buffalo Bills enjoying his initial taste of Orchard Park grass. Patriots were ahead 10-0. The Bills proceeded to lose in typically heartbreaking fashion.

I am not ready for football. Haven't been for years. Wrote about that a few times. But, Hank Williams Jr. wannabes, you keep asking me if I'm ready. So here is why I am not, in the ever popular reverse top-10 format:

10. Chris Berman
9. They took away the Oilers
8. "The National Football League"
7. Military and war references
6. My Bills
5. For the 900th time, I do not want to watch your "all-new" TV show
4. One of those horrible commercials is going to invade my brain, latch on, and game-day-bucket-go-boom me until I drive over a cliff on Super Bowl Sunday
3. The NFL is fully invested in shortening the lifespan of its players
2. Criminals everywhere
1. IT'S STILL BASEBALL SEASON

It took me 90 seconds to come up with that list. I didn't even cover pregame shows, fantasy team conversations, Football Night In America, the NFL's complete inability to dress itself or blackout rules.

So let us turn to more pleasant activity. I have a couple of blog matters to address, most actually related to baseball -- you know, that sport that plays 146 more times than the sport that is currently yelling at you from your TV.

There are a couple of blogs that I thought had disappeared a long time ago that have recently re-emerged. The first you may know about already. The Troll has returned and he's collecting cards. One of the finer developments of the past week if you ask me.

The second is Project Phillies, who last posted FOUR years ago before returning. If that isn't incentive to never clear anyone from your blog roll. I actually traded with Amy once. It was on that post that a relative of former player Steve Brye contacted me and berated me for telling everyone how Brye was the favorite player of my brother's stuffed lion. (OK, actually she thought it was delightful).

Also, you may have heard that I won a contest the other day. I landed a nice group of minis. Some of them will fall under my Allen & Ginter frankenset interests. A couple others will fit with other collecting interests. But others will be up for trade. So if you're collecting any of these many insert sets and see a card you need, let me know.

And, finally, proof that I do still send packages and that they bring delight to 2-year-old girls.

OK, onto the next segment -- blurry pictures.

A couple of posts ago, I mentioned how I sort and store my cards. People seemed to be interested -- so interested that they asked for pictures of my sorting methods.

I decided to appease them even though I know all it's going to do is bring disappointment. I am not a picture taker. It's someone else's equipment. I don't know how to operate it. My phone is for calling and texting only. The sun got in my eyes. The cat ate my homework. I thought that was pizza. Your sister does it all the time. Excuses, excuses and more excuses.

But you've been sufficiently warned.

Here is the card desk that I mentioned in that post: 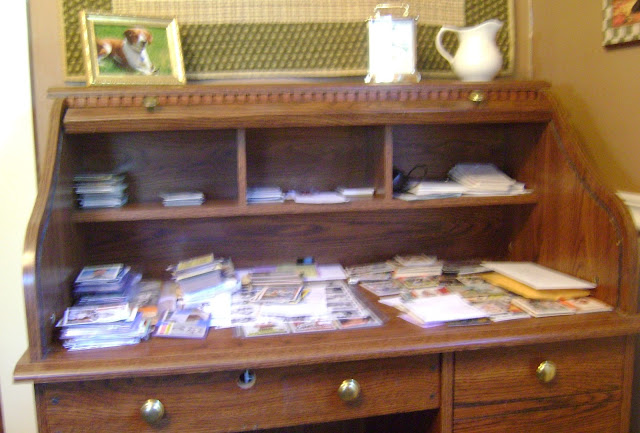 I am aware from how I wrote the post that some people think that everything is neatly compartmentalized. Cards on the left are incoming, cards on the right are outgoing and cards in the middle are for future posts.

You can also see the shelves above that are remarkably neat, just because I finished adding cards to binders just a couple of weeks ago.

That's our dog Dodger in the photo at top. He actually moves in real life. Frequently. And relentlessly. I did not put the tea pourer, or whatever the hell it is, on top of the desk. Everything I have in the house is decorated by someone else not named me. 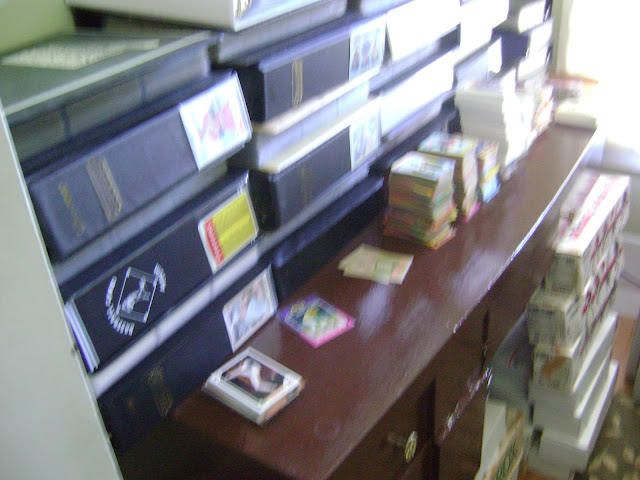 Again, I apologize about the blurry. But if you want a photo blog go get artsy somewhere else.

You probably get the gist of the colorfulness of the stacks in the middle. Those are my glorious '75 Topps minis, the loves of my cardboard life. And behind them is the complete set of 2011 Lineage '75 minis. I really need them in binders!!!

You can see the boxes down below. Those are for the cards "not good enough" for binders. There are other boxes you can't see. 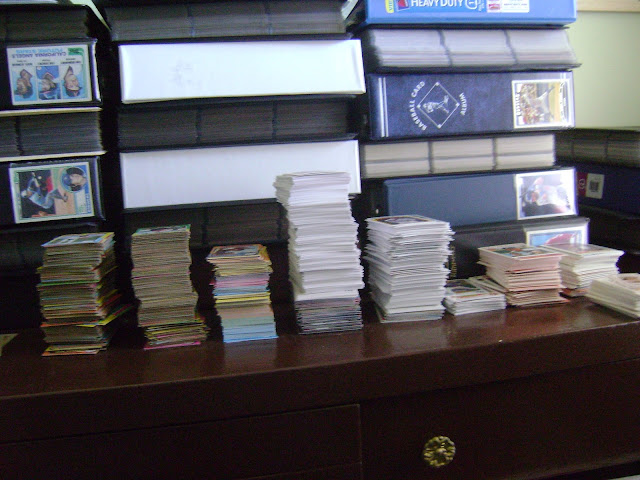 The binders on the far right are the beginnings of my Dodgers binders. The other binders are for sets. Some are conveniently marked with a card from that set, some are not (the two white binders contain complete 2009 OPC and 1988 Score sets). Again, the binders aren't stacked in order. 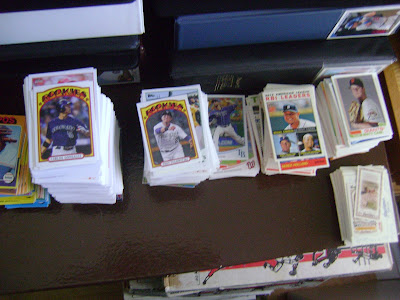 Underneath the desk are boxes and more binders. The giant box of Dodger dupes is under there, too. Cackling. 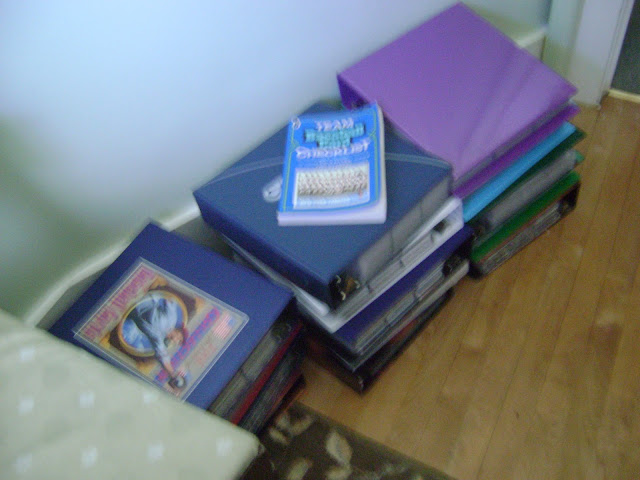 Those binders on the floor all contain Dodgers. I started going with more colorful binders so I wouldn't confuse them anymore. Some of these binders I've had since I was a teenager (you just can't find quality workmanship like that anymore).

The book on top is the Team Baseball Card Checklist from the early 1990s. You can find a non-blurry picture of it and a proper ode to it in a previous post that I did, but I can't find it right now. I'll link it later, if I remember. 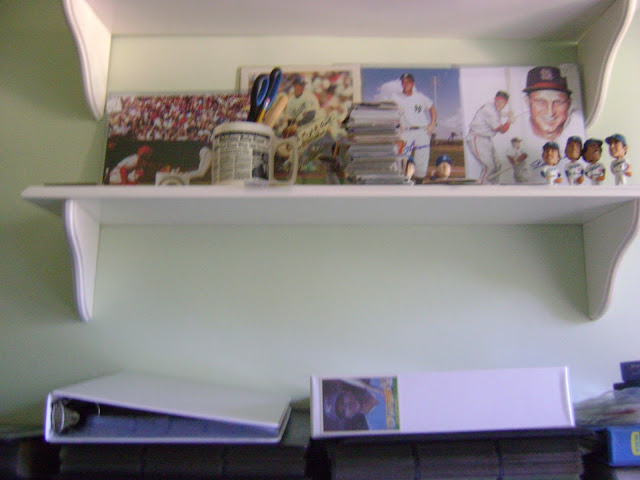 I forgot to mention in the sort-and-store post that I have a few cards on a shelf. They're basically "just in case" cards for trades. The only one you can really see is the Dodgers stack. Those are pretty good cards there, so I've got to get them to people some day! (Other packages hopefully on the move Friday).

The autographed photos there I've shown previously. The only one I'm confident is legitimate is the Orel Hershiser photo that Zach of Autographed Cards got me. Still very cool. Possibly even more cool than the bobbleheads of "The Infield" on the far right. 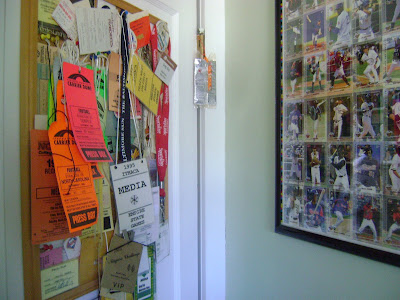 Final picture. At right is a framed uncut page of a PCL set from 2009 (I think). Lot of guys playing in the majors today on that page -- Posey, Morrison, Bumgarner, Frieri, Smoak, Arencibia, etc.

At left is a bulletin board with a bunch of my press passes from back when I was covering events every week. It's rather packed.

Oh, and there's a nice coconut-scented Little Trees air-freshener in the middle there.

I tell ya, this card room has everything.

And it's probably where I am right now.

Cause I'm still not ready.

Scott Crawford said…
Glad to see the card room/card desk pics! Someday, when my room doesn't look like there was a nuclear accident near Duryea, PA (steady but slow progress on that front), I'll have to take updated pics.
September 8, 2013 at 5:15 PM

Anonymous said…
Are those actual cards on the outside of the binders, or color copies (for lack of a better term)? I like the idea, but I'm not sure what I would do with vintage sets... Although I suppose I could get some beat-to-hell commons and use them on the outside.

I've been a Steelers fan for something like 30 years, but I'm never ready for football in September. I've sent numerous requests to the Rooney family asking them to push the start of the season back a month or so, but I suspect that they don't even consider my requests.
September 8, 2013 at 6:49 PM

View From the Skybox said…
Glad I'm not the only one who despises military and war references about football. It makes me sick.
September 8, 2013 at 7:07 PM

Play at the Plate said…
I felt bad enough about my card sorting/organizing/storage situation when I just READ your post. Now I'm seeing pics...I'm depressed now. That's not your fault though. It's part of the fallout from my crazy spending in the late 90's that I'm sure you've read about. My cards are out of site, so out of her mind. Anyway, the list you made. Mine would be Chris Berman 10-2 and then the same #1. Although I do agree with VFTS and you about the war stuff.
September 8, 2013 at 7:43 PM

Spiff said…
Thanks for the card room pictures. Always good to see how the big guys get it done. What is this football season you speak of? Not sure I knew there was another sport other than baseball.
September 8, 2013 at 9:41 PM

Brad's Blog said…
My desk has 32 piles of team cards for when I make trades with people so I can include some cards they might like.. its quite the sight
September 8, 2013 at 10:28 PM

Swing And A Pop-up said…
Thanks for showing what your card room looks like. It's always interesting to see how someone else organizes their collection.
September 8, 2013 at 10:31 PM

BaseSetCalling said…
Herb Washington should be making some hot-card lists this month.
September 9, 2013 at 12:02 AM

Hardball Crazy (Derek) said…
totally agree on your top ten list. NFL is so overcovered by media and obsessed by so many. I dont look forward to MSU Spartans as much as I used to mostly having to listen to UM fans. I miss RichRod there. :)
September 9, 2013 at 12:51 AM

Anthony Hughes said…
I gave up on pro football when the Rams left for Missouri, and I no longer had a local football team.

I almost never watch pro football on TV, but I love to watch high school football and never miss a Friday night.

CaptKirk42 said…
Another nice post, and another one that reminds me of my disaster area that could compete with Scott Crawford's. I'm in the process of making a post about organization or lack there of. Guess I have another "neat and orderly" post to link to now.
September 9, 2013 at 11:31 AM

CaptKirk42 said…
Oh I forgot to add, I totally agree with #1 IT IS STILL BASEBALL SEASON. (even if my Nationals don't have a chance of catching up to get into the chase for the almost wild card)
September 9, 2013 at 11:34 AM

night owl said…
"It was a war out there." "War room" "battle in the trenches" "aerial assaults," etc.

It's cliched and poor writing (and broadcasting) from my standpoint, but it also strikes me as offensive to veterans who have been in an actual war, and such references add to NFL's general self-important vibe that annoys me.

Some references (the blitz) are so ingrained they'd be difficult to avoid, but others, there's better way to say it.
September 9, 2013 at 11:53 AM

Bo said…
I tried to make a comment on Project Phillies blog but was unable to - the captcha was not working. I see she moved to Long Island and was wondering if she was interested in doing an in-person trade? Can you send her my email? Thanks!
September 9, 2013 at 12:56 PM

I agree with a lot of that, but I still love football season. And you can rest assured that at least you're not a Jets fan.

Jerry Yeager said…
Organizing a collecting is like herding cats, almost impossible. I slowly organize into binders and view my to be pile with hope and trepidation.
September 9, 2013 at 6:00 PM

Fuji said…
I'm definitely ready for some football. But that doesn't mean that I won't continue watching baseball. I will just be flipping back and forth on Sundays for the next month or so.
September 10, 2013 at 3:07 AM

Ana Lu said…
I would be ready if I still had espnamerica...since I don't I can only get to see a game per week if that much in a local sports cable channel...
None the less that uncut page makes a great poster to have on the wall!
September 10, 2013 at 5:45 AM