'56 of the month: Brooks Lawrence 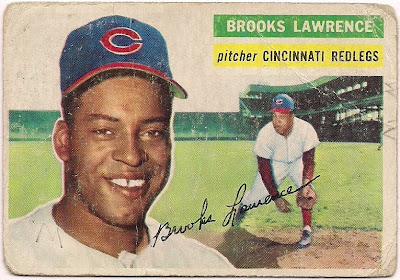 During the last '56 Of The Month post, I unveiled what I said was the worst-conditioned card in my 1956 Topps collection.

I kind of forgot about this one.

I don't really consider it as beat up as the David Pope card, but just for posterity's sake, let's look at all the things that are "wrong" with this card: This is another one of those cards that I received from that grocery bag when I was a teenager. That bag is really the main reason I'm pursuing this set. I'd never have the guts to do so otherwise.

But there are still major obstacles ahead. Lawrence represents another chore besides the very obvious one of picking up a Clemente/Aaron/Williams/Mays/Mantle/Berra/Robinson from this set.

Out of all of the cards I obtained from that grocery bag -- and I accumulated a good one-fourth of the cards from the '56 set out of there -- only two cards were from the last series.

The 1956 set was issued in four series. I had to research a little bit to find that. When I finally did find it, the information came from my late friend and collector Chris Stufflestreet (it's hard to reconcile that he's been gone for a year now).

Cards 1-180 are the cards that come in both gray backs and white backs. I have no desire to pursue both kinds of backs, and I hear that a lot of '56 collectors feel the same way.

Cards 181-260 are considered slightly scarcer than the other cards in the set, but nothing drastic. Maybe 5 dollars more a card for a card that's in perfect shape.

It certainly hasn't bothered me as I already have 51 of the 79 cards that are in that series.

For a long time, just based on the fact that I had just two cards from that series, I thought that the final series was the most difficult to obtain. But now I know:

Whoever's cards those were out of that grocery bag, it is obvious that they got bored with collecting cards by the time the last series came around and didn't bother purchasing any packs. This was a common habit during the era of multiple series. Kids would go back to school and start following football. Baseball card collecting was perceived as a spring/summertime activity, not year-round like it is today.

Today, I have increased my total of cards from the last series to nine. And this post is a reminder to me that at the upcoming card show, I must find a binder with the '56 set and go straight to the back. 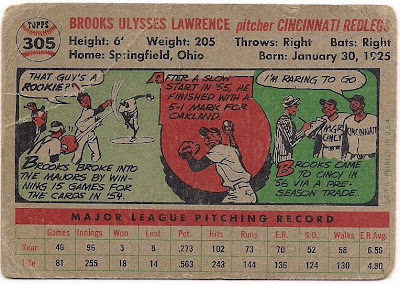 And now for a little about Brooks Lawrence.

Lawrence is yet another one of those talented players forgotten by time. He won 15 games in his rookie season in 1954 with the Cardinals. During the year that this card was issued, he won 19 games for the Reds. In 1956 and '57, he won 35 games for Cincinnati and yet his name rarely is mentioned.

Lawrence also was fond of reading and poetry, received a Bronze Star in World War II and coached the baseball team at Wilmington College for six years.

Getting to know players like this is just another reason why I need to find cards from that final series of the 1956 set.

night owl said…
It's been mentioned a few times. Here's one of the first: