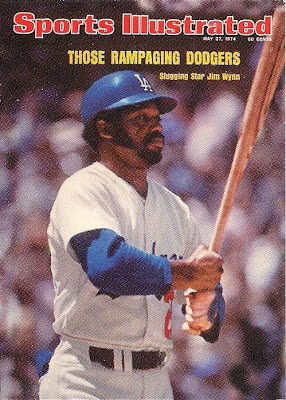 The Dodgers last night clinched their 16th division championship since arriving in Los Angeles in 55 years ago. They celebrated with a pool party (scandalous!), and I am thrilled that I now have two weeks to go before I start sweating out the Cardinals and/or Braves and, hopefully, the Red Sox.

It's enough time, in fact, for me to consider my favorite Dodger card that was issued in each of the team's championship seasons. And I went through and found favorites for each of those years. I wanted to add the Brooklyn teams, too, but I'm embarrassingly short on 1940s cards.

You could also make a case for each of these being the "best" Dodger cards of those years, but I don't want to get into that. I'd like to be a fan for today and be partisan and biased and irrational. You know, all those things that make a fan great.

It's interesting how some of these cards are borderline iconic. That's what happens when you win or reach a championship. You elevate the status of your bubblegum card.

So here are my favorites for each year of Dodger titles. You've seen a lot of these cards before: 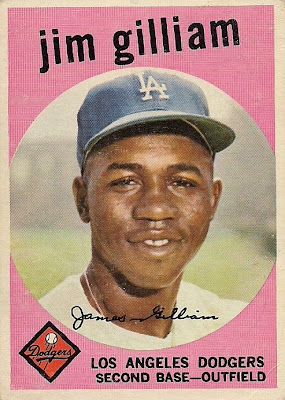 This is the first 1959 card I ever obtained -- one of the first "super old vintage" cards I nabbed when I was just getting into that stuff in my early teenage years. It's also one of the few Dodger cards from that set that is pink. Normally, I'm distressed by how many times pink was plastered on Dodgers cards, but in this case it works with the era. Gilliam is one of my favorites because of this card. 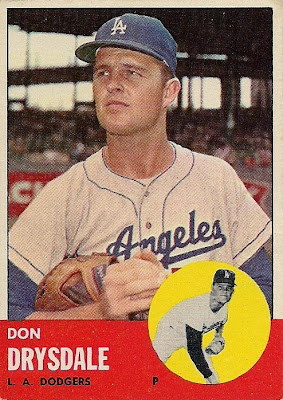 Again, this is the first 1963 card I ever owned. I acquired it in a "high stakes vintage" trade when I was in high school. (Trading vintage for vintage at that time seemed crazy -- like driving-stolen-cars-150-miles-an- hour crazy). For a long time I was extremely proud of how all the corners were sharp. It was a mint 1963 card! The corners aren't as sharp now. But still in spiffy condition. 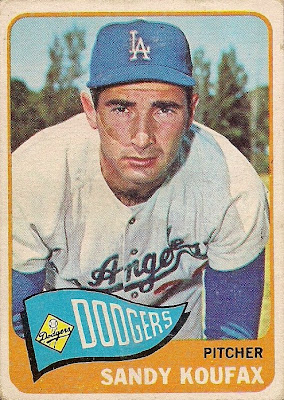 You're not supposed to see this card yet because I'm not ready to show what I received from Check Out My Cards. But the package arrived TODAY and that is a SIGN. So drink in the awesomeness of a Sandy Koufax issued during his fantastic 1965 championship season and then forget you ever saw this card until next week. 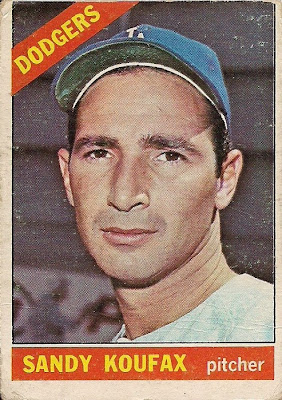 There is really no other option. Once again, this is my first 1966 card, purchased long ago during my first foray into vintage. It's Koufax's final solo card of his career and it kind of sums up the whole tone of that '66 season (Koufax's last year, Dodgers swept in the Series). 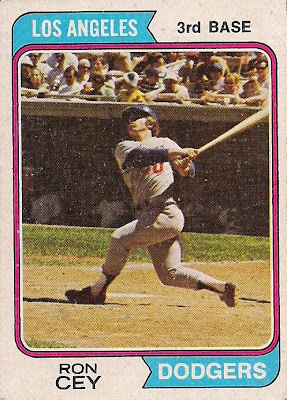 This is where "favorite" and "best" conflict. The '74 Steve Garvey card is without question the best. A classic card and a card issued during his emergence as a star and the NL MVP. But I cannot put that card ahead of the first solo card of my favorite player of all-time. Plus it's pretty fantastic in a '70s kind of way. 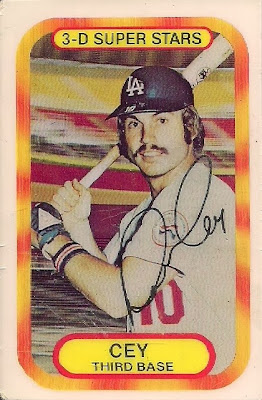 We're getting to the area where my collecting and fandom intertwine. This was my first experience with a pennant race and a championship. It was also my first year experiencing Kellogg's 3-D cards. I remember bringing this Cey card with me on a trip to my grandmother's, sitting in the back seat and staring at it with pride. It was as if everything that was cool about baseball and collecting had merged into one card. 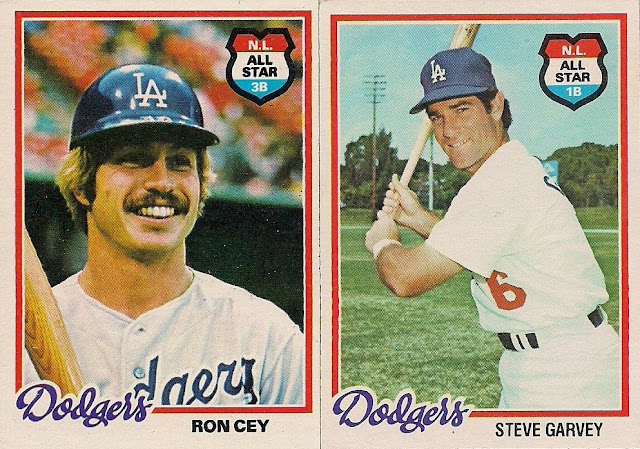 I can't choose between the two. They're both all-stars. They're both key parts of the Dodgers' 1977-78 seasons. I celebrated just as equally when I pulled each out of packs. If the Cey card looked a little better, it'd be my favorite, but it's not one of his better cards. The Garvey card meanwhile says "Garvey" through and through. 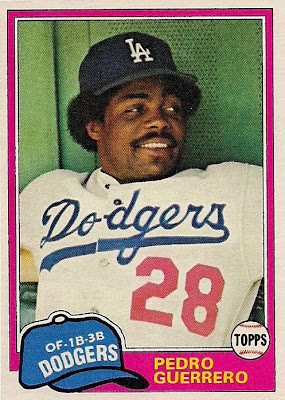 Yeah, yeah, I know you want Fernando. But I never saw the Topps Traded Fernando card in my possession for years after '81. I had the Fleer "Fernand" card but the typo bothered me. Meanwhile, I was growing into a major Pedro Guerrero fan and he was one-third of the MVP crew in the '81 World Series. Plus this is his first solo card (Fleer and Donruss didn't even bother with him). 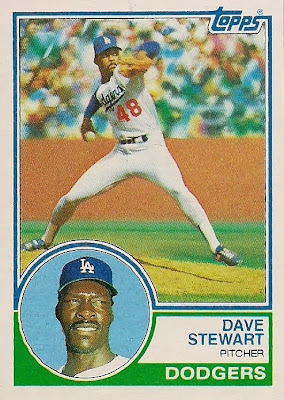 Though they clinched, it was a sad year for the Dodgers as it was the first time they lost a National League Championship Series. The Dodgers were also breaking up the old gang and seeing cards of Cey, Garvey, Russell  from this year make me sad, too. I preferred to focus on the young players at this time. Guerrero, Howe, Sax, Marshall, even Greg Brock. But I loved this Stewart card. It's straight-up "I'm going to kill you with this pitch." 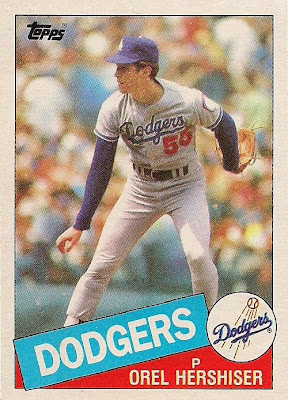 I'm a little ashamed to say it, but as soon as Orel Hershiser started showing he could pitch, I kicked Pedro Guerrero to the curb and made Hershiser my favorite player. This is still a fantastic card all these years later. 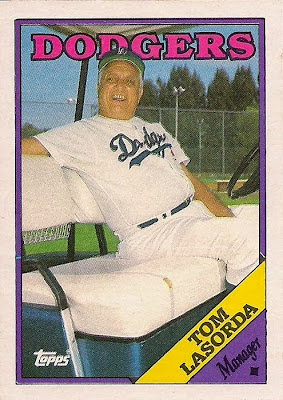 It's not difficult at all making a manager's card my favorite card. We all know this card. We all love it. Or at least we should. It's the greatest card of 1988, Bo Jackson fans. 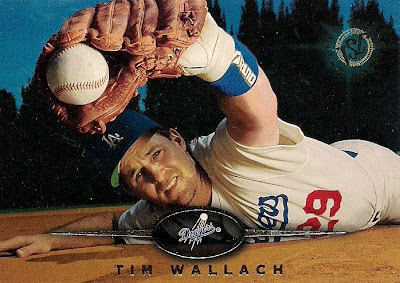 Clearly, if I was a kid collecting in 1995, I'd probably pick the Topps Piazza or one of the many Nomo rookie cards. But I wasn't a kid than and I wasn't even collecting. So today, in an upset over the Mondesi rookie cup card, this is my favorite '95 Dodger card, in all its hokiness. 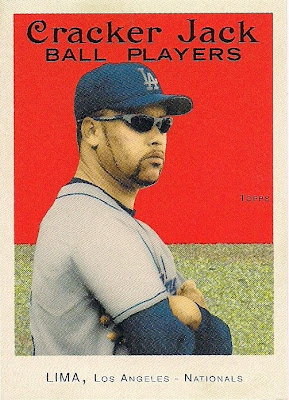 This was a tough one. There were so many varieties of cards to choose from during what was a pretty unmemorable championship season for L.A. (they were eliminated by the Cardinals in the Division Series and then Dodgers manager Jim Tracy made them shake hands with St. Louis).

I decided to go with Lima, because of his terrific winning performance in that series and because this is a great card. There's not much else that can challenge it. 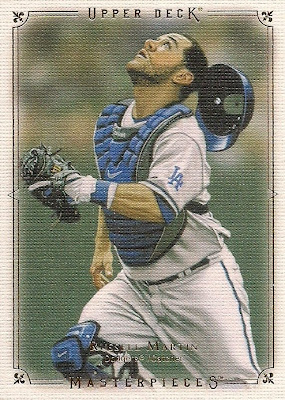 This was the first time that the Dodgers were in the playoffs since I started blogging. In fact, it was a month into my blogging career. I didn't know how to handle blogging and rooting then (I still don't know if I do). But I did know a great card when I saw it. This Martin card just edges out another Martin card, the Stadium Club version. 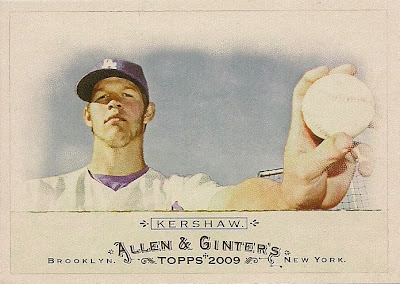 My Kershaw fandom was already solidified by the time this card arrived. But I'm sure the card had something to do with me deciding to collect Kershaw cards. It's such a great card but I still don't like the Phillies. 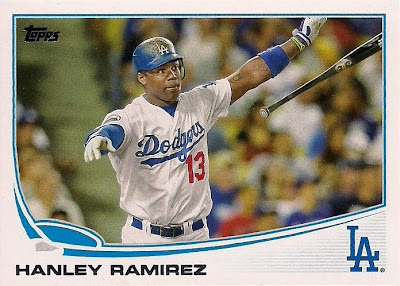 It's possible that another card will come along and knock this from my favorite list. There are still some 2013 sets to come. But I like this one a lot, and considering what Ramirez has done for the Dodgers, it's already appropriate for this season.

I don't mind bat flips. I suppose if little kids end up flipping bats and taking out a whole row of Little Leaguers then maybe we need to think about it. But overall it's just one of those things that people like to get their undies in a bunch over.

Kind of like sputtering over jumping in a pool to celebrate.

Which if you ask me, was simply fulfilling my request:

Thanks, Dodgers. You're all my favorites.

night owl said…
Crap. I always forget about that one (it's easy to forget).

Fuji said…
Wow... I've gotta add a '65 Koufax to my collection. And the Kellogg's 3D cards from the 70's and 80's are awesome. Congratulations on your Dodgers clinching. Hopefully the A's will wrap things up this weekend.
September 21, 2013 at 9:09 AM

Stack22 said…
Nice pick for '95. The Hall of Fame asked for that glove when Wallach retired as he had worn it for the last 15 years of his career. A request he politely declined.
September 23, 2013 at 1:47 PM