There are a million other things I should be doing ... 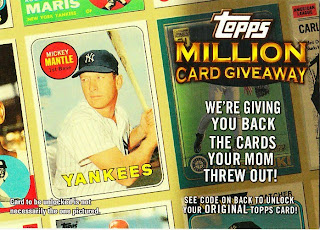 The Million Card Giveway code-entering process is an all-day affair. If I didn't have the day off, there's no way I'd waste half my leisure time doing this, but since I do, I'm having a little fun.

I hope between all the crabbing and the only half-deserved "shame on you, Topps" sentiments that people are having fun with this. There are some really cool cards coming out of this promotion and even though I'm having a heck of a time getting through, I think this is a great idea and a good deal of fun.

I completely expected the site to be slow on the first day. This is why I never go to a movie the first day it's out or check out the new restaurant in the first week. I can't deal with the inevitable glitches or the high-strung people. But I made an exception with this case because a) this involves cards, and b) there aren't mad throngs of humanity surrounding me (just a million collectors I can't see). So I stepped outside of my comfort zone this one time and this is a nice reminder of why I'm never the first to do anything. 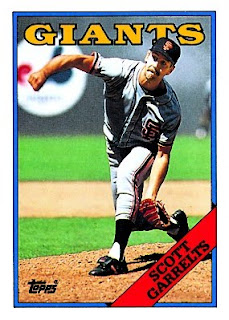 I used the Mantle '69 code card up top to claim the Garrelts card.

I haven't been able to do anything since. I entered a second code and have been on hold since that point.


I'm going to post all of the other code cards at the bottom of this post. When I finally get through to enter another code, I will post the cards I git as I git them with the corresponding code card. Git it?
I don't know when that will be. It'll probably be after most of the collectors have finally hit the sack. That's the perfect time for a night owl like me to get some work done anyway.

Edit: Success almost as soon as I posted this! Well, success in terms of getting through anyway. The last seven cards were redeemed in 45 minutes. Here are the ugly -- and I DO mean ugly -- results: 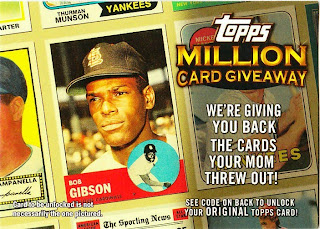 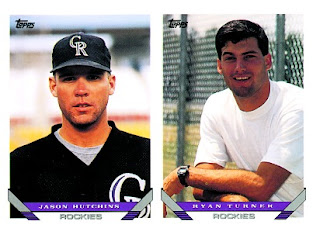 (Lovely, a guy in his Fruit of the Loom T-shirt. At least it's a card I didn't have). 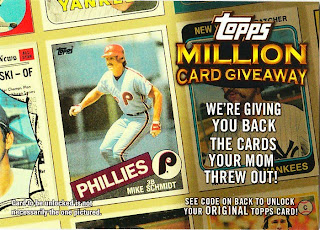 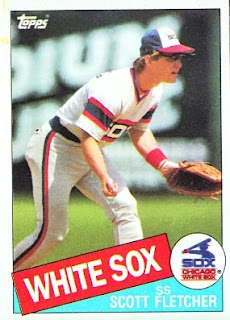 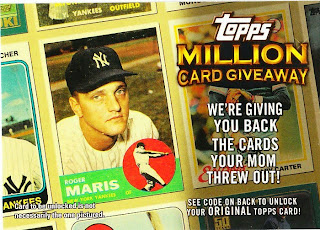 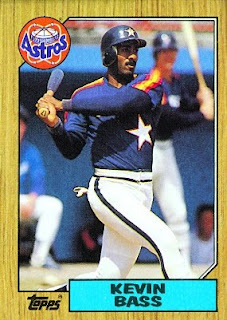 (I knew a 1987 Topps was coming. I do believe I need this card. But need is an awfully strong word when it comes to a 1987 Topps Kevin Bass). 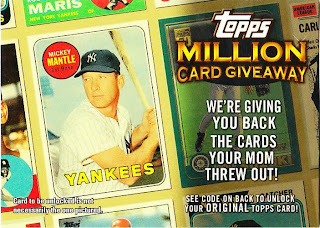 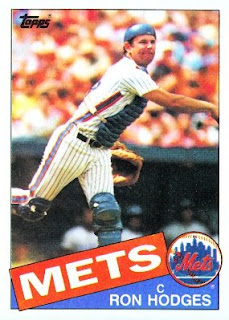 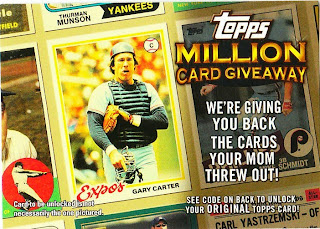 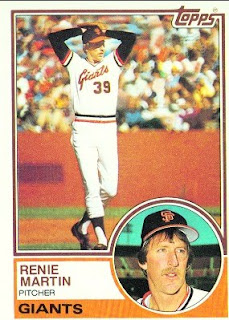 (There is no bigger fan of the '83 set than me. But I have completed it already, and I'm starting to think that other people are having more success with this promotion than I am). 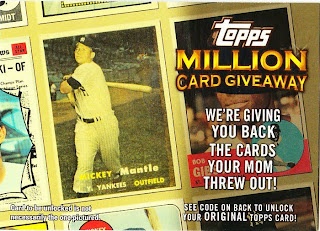 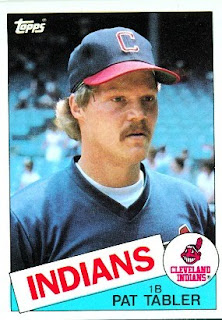 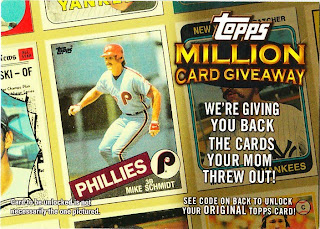 Schmidty! You're my only hope! Find me something outside of the 1980s realm, please!

Topps didn't provide a card photo with this one. Probably because it was embarrassed that it was giving me a Giant from the 1990s as my last redemption. It is also the third Giant redeemed in this group.

Here is the final tally:

So, three cards that I need. And none I'm going to want to pay to get shipped to my house.

However, other bloggers had a lot more success with this. In fact, I think it's safe to say that no one has done WORSE than this.

But I am not scarred. I will indeed be buying more cards and entering more redemption codes. Maybe I'll actually get something I want.

Unknown said…
It's a bummer on what you got, but i agree with you that the idea is pretty cool and it gives you hope. I got a '73 topps Jack Heinemann, which I dont need or want, but for some reason I still think it's pretty cool, maybe because I wasn't around in those days.
February 15, 2010 at 8:57 PM

Anonymous said…
I finally managed to unlock my card, and it turned out to by a 1980 Scot Thompson. He's got a cool mustache, but that's not worth the $2.92 to have the card delivered.

Anonymous said…
Ouch! I was beginning to think that I had the worst pulls of those posted.

BASEBALL DAD said…
I just posted mine, then started going through the other blogs.I've looked at three blogs so far.All three had Tribe cards! I get White Sox, A's,Mariners and Brewers (Robin Yount!).
February 15, 2010 at 9:07 PM

Field of Cards said…
I think this is great. The complaining was fun when the site failed. Finally being able to redeem was fun. Laughing at what I got and what others got is fun.

Play at the Plate said…
Did you use IHATEGIANTS as your login name because they apparently knew that and were exacting some revenge.
February 16, 2010 at 1:34 AM

MMayes said…
I think what you need is to stop getting the All-Star and HOF code cards and see if you can get lucky and get the 1974 Mike Tyson code card which will reveal a 1963 Sandy Koufax.
February 19, 2010 at 9:56 AM