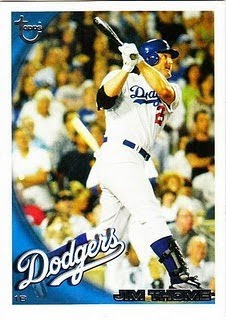 After three rather intense days of work, I'm ready for a mindless Sunday.

I don't want to spend any more time thinking than I have to, hence the rambling, short nature of this post. And, yes, I did just say, "hence." No, I do not know where that came from. I do not say "hence" when I speak. I would just like to be clear on that.

The first rambling concerns the latest Define the Design segment from a couple of days ago. I decided to put up a poll for the name for the 2010 Topps design. The options are the following, based on people's comments:


I am partial to the binoculars set, just because many of the photos, especially when the swoosh is a dark color, look like an image as seen through binoculars. Now, as deal said, telescope would be more appropriate, because the card does look more like what you'd see through a telescope (one eye as opposed to two eyes with binoculars). But I've never seen anyone bring a telescope to the ballpark. So I'll stay with binoculars as my favorite.

As for 2010 Upper Deck, I don't know if we're there yet. UD always has to be so difficult because Upper Deck and design are mortal enemies. They're really trying to be forgettable, and they're doing a damn fine job of it. But I'll figure something out.

On a completely different topic, I tracked down another Million Cards Giveaway code. People are probably pretty bored with this by now, but I'm not. Code-entering is now an everyday aspect of life: Get up, take a shower, grab some lunch, walk the dog, enter a code, read the paper. See how seemlessly code-entering fits into the equation?

I thought of saving the code for when the Giveaway Machine starts regurgitating '50s cards again. But I have no patience when it comes to cards. The people who leave unopened packs or -- perish the thought -- boxes of cards in their home for months are absolute freaks. I'm sure of it.

So, I immediately got on the site, scanned the "recently unlocked cards," saw there was nothing from the junk wax era -- just 1970s and a couple early '80s items -- and took the plunge.

Here is what I redeemed: 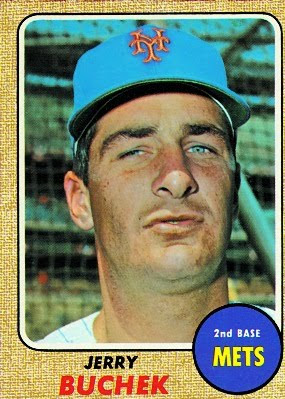 Awesome. Something from the 1960s. Although I hope the card that's sent to me isn't this miscut.

This card is actually from my least favorite '60s set, but you can't go wrong with the mug on that photo. Look at those eyes. He's trying to intimidate you with his squinty eye and hypnotize you with his ocean blue starey eye.

I've never heard of Jerry Buchek. He was a regular for just one year, the starting second baseman for the Mets in 1967. This is the last card of his career.

My luck is starting to turn with the last two redemptions. I may ask to get some of these cards shipped yet. Lord knows, I deal with enough Mets collectors. Or maybe I can get one of those anonymous traders on the Million Giveway site to give me a Koufax for Buchek.

OK, one other thought and then I'm hitting the sack.

I don't have a Facebook account of my own. It doesn't appeal to me for what most people I know use it for -- to communicate with old friends or co-workers, etc. And I certainly don't want it so I can update people on what I ate or saw on TV. I believe that's called "pathetic."

But I'm surrounded by people who use it, and it seems that as another outlet for the blog, it would work and maybe give me a few more ideas.

What do you think? How many of you have your blogs on Facebook? How's it working for you?

Anyway, those are my babblings for now.

I'll be back with a more structured post soon. In fact I'm about to update one of my more popular posts.

Dinged Corners said…
We don't have a Facebook account or any social networking thing. But then again neither do we tweet or text or watch cable/satellite TV. We resist whenever corporate entities say "You need this." Except of course if the corporate entity is, like, Topps.

You're such a good writer, the way you stay socially connected is to write! And you get a great response.

BASEBALL DAD said…
Last summer I attended our 40th HS reunion.Most of my classmates were on Facebook.My youngest son is on Facebook.I was not, until the reunion.I look at to see what some of the people are up to, but rarely make any posts.Maybe a comment once in a while.I see card sites there but I generally skip over them because I read them here.I don't tweet, I don't even have a cell phone! I do watch the MLB channel on cable though.
February 28, 2010 at 12:23 PM

dayf said…
No, I do not have the power to cause earthquakes. Not even after some of my three-bean fire chili.

Look at that card up there. That Dodger logo is totally surfing that monster wave. No binoculars have a corporate logo etched into the bottom corner.
February 28, 2010 at 12:40 PM

Sean Benton said…
I've been on facebook for 5 years and can't say I've ever really seen a consistent blog on there. The built-in notes application doesn't allow for images or customization and posting on your profile doesn't serve the same purpose as a blog. I would suggest creating a fan page on facebook, where you could link to new posts here.
February 28, 2010 at 12:56 PM

Anonymous said…
Cant go wrong with vintage cards! But yeah, I have a facebook link on my blog, but thats just to friend me, not really promoting my blog, more like my blog promoting my facebook!
February 28, 2010 at 2:09 PM

Anonymous said…
I've linked my blog to my Facebook account, so new posts show up in Faceblook, but that's more as a convenience to my friends there than anything else.

capewood said…
I have a Facebook account for friends and family. I don't think putting the blog on FB would be a good idea. I do put links to my blog on occasion when I think my friend would be interested in something I blogged.
February 28, 2010 at 5:51 PM

Play at the Plate said…
I think tsunami fits when it's a blue wave...but not so much with the other colors. HOWEVER, I do NOT wish to cross Dayf if he's been eating three-bean fire chili.
March 1, 2010 at 2:49 AM