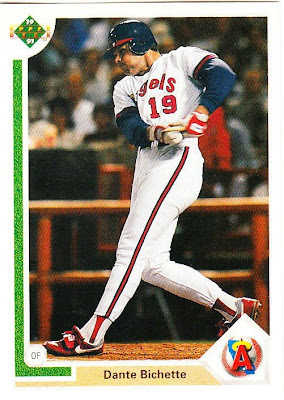 Whenever more than one person sends me the same night card, that can mean only one thing: it's automatically an awesome night card.

I received this Upper Deck card of Dante Bichette recently, several months after it was sent to me by someone else. The reason that it is such a naturally awesome night card is because it is both a night card on the front ... 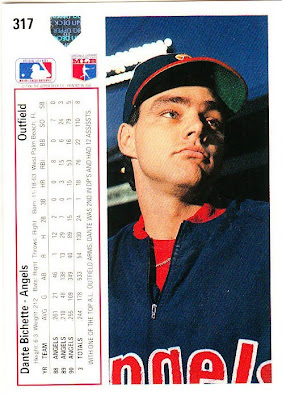 I'm sure there are a few other cards like that (probably almost all of them made by Upper Deck). But it'll be hard to beat this one, since the bank lights behind Bichette really make the photo on the back.

I have but two memories about Dante Bichette. The first is of pulling his 1989 Topps rookie card about 37 times during my card-buying spree of that year. He is in the top five of the player I pulled the most that year. Right there with Scott Bailes and Bob Brower and famed former Angels manager Moose Stubing.

The other memory of Bichette is he was the stalwart of my fantasy league team for three years.

I've mentioned this before. I suck at fantasy league baseball. I participated in it for four years in the 1990s and never came close to being competitive. It killed my enjoyment of baseball and eventually I quit before I turned on the sport forever.

But Bichette wasn't to blame. He was a consistent source of power for my team between 1993-96 when he was part of those home-run hitting Rockies teams. We were able to keep a select number of players (I don't remember how many) from year to year, and I always kept Bichette. I almost felt bad about keeping him. I thought he deserved to play for a winning fantasy team,  instead of being brought down by the atrocious rotation of pitchers I kept drafting.

It's kind of crazy that a Rockie meant so much to me during those years. In the end, it's what made me quit the fantasy game altogether. I began to realize how bizarre it was for me to root for a Rockie to do well. My natural rooting instinct began to get confused. I'm sure at some point I was secretly happy that Bichette hit a home run off of Pedro Astacio or some other Dodger pitcher. I had a warped sense of allegiance.

I began to hate the kind of fan I had become and I eventually notified the league organizer that I wouldn't be returning the next year. He nodded in recognition and said something that made me know that he thought I was quitting because my team was never any good.

I was free. No more Rockie-loving.

And I've never gone back.

Play at the Plate said…
I play in 4 Fantasy Leagues each season. I set the rosters...and I don't pay attention at all to who is playing other than to set the rosters. I always root for my team and against the ones I don't like. I'd rather see my Rangers win than my fantasy team.
February 22, 2010 at 6:43 AM

TheRealDFG said…
I have played fantasy football since 1998 but the few times I tried fantasy baseball, it drove me nuts. There is too much work involved to keep a good team going.
February 22, 2010 at 10:03 AM