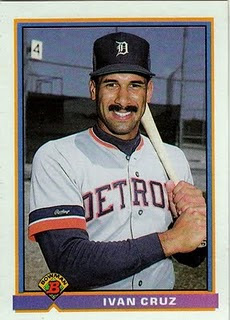 I am so freaking tired right now. A bloody 13-hour work day has robbed me of my love for blogging.

So, I'll see how this goes. If it doesn't make sense, I promise I'll come back tomorrow (or later today) refreshed, renewed and ready to write about something ridiculous.

It was the first feature story I ever did on a professional athlete. And because it was a baseball player, I was freaked out of my mind. My editor had told me to find someone on the team that would be worthy of my first feature. Some team official said that Cruz was connected to the famous baseball-playing Cruz family that produced Jose Cruz, as well as Tommy and Hector. So, I decided he would be a good subject.

Well, it turns out that just because your name is Cruz and you're from Puerto Rico doesn't mean you're related to every Cruz in the country. Cruz was not related to those Cruz's.

I distinctly remember sitting on the dugout steps talking to Cruz, who had a fairly thick Spanish accent, panicking in my head because he was not related to Jose Cruz and watching my whole line of questioning vanish into thin air.

Fortunately, Cruz had another story. He grew up a baseball player, thanks to his father who loved baseball. But his father died when he was 11 and he gave up the sport. He became a basketball and volleyball star instead. But after a conversation with his step-brother he eventually returned to baseball, went to college and was signed by the Tigers. His step-brother was Julio Cruz, who you might remember was one of the Mariners' first notable players.

I had my story.

Cruz was one of the better hitters for Niagara Falls, and I expected to see him in the majors. But years went by and I never heard about him. Eventually, I stopped paying attention. When he did reach the majors -- eight years after his first year in pro ball -- I completely missed it. In fact, I don't recall seeing him in a major league game at all.

But I'll always remember him because he was my first baseball feature subject. And if he noticed that the 23-year-old interviewing him was practically sweating bullets, he never said anything. 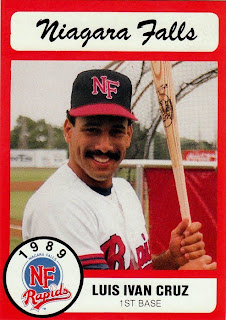 steveisjewish said…
I would have been mortified if that happened -
February 5, 2010 at 9:57 AM

Anonymous said…
That's why I always have the off the wall questions prepared for an interview - if only to break the ice. Good story. :)
February 5, 2010 at 2:52 PM

Collective Troll said…
Great story!
But all the Cruz's aren't related? Really? No way...
Hopefully a good nights rest will help you forget about your 13 hour day. Hopefully.
February 5, 2010 at 8:53 PM