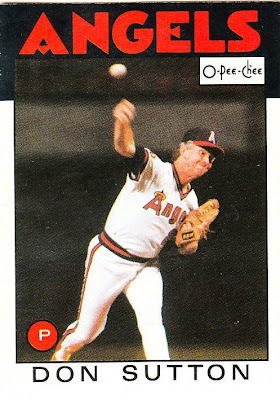 What better way to recognize tonight's start of the 2010 Winter Olympics in Vancouver than with the first O-Pee-Chee night card to appear on this blog!

This card looks exactly like the 1986 Topps Don Sutton card, except for the O-Pee-Chee designation in the top right corner of the photo. The card stock is lighter on the back, too, but that's as detailed as I'm going to get because there's a blog dedicated to OPC dissection already.

I look forward to the Olympics every two years, and am old enough to have watched when it was every four years (the 1984 Olympics in Los Angeles was probably my viewing high point). I've heard others say they prefer the Summer Olympics to the Winter, but I'm the opposite. I like the Winter Games.

Part of it is because I live in a winter climate, and I'm not far from Lake Placid. I have interviewed several Winter Olympians. But also, the Winter Games are more interesting to me. They have unusual sports that I enjoy deciphering. And, I pay more attention to the Winter Olympics, because I'm cooped up in the house anyway. During the Summer Games, I'm usually off doing something else, because, well, it's summer.

The best part of viewing the Olympics where I live is I am close enough to Canada that I receive Canadian broadcasting on my cable system. For those of you stuck exclusively with NBC's television coverage, I have this to say: I'm sorry.

Everyone is aware that NBC minipulates the Olympics so that the most popular events appear in prime time. The network tape-delays the Games to death. I would imagine with the Games being in Vancouver, that there will be more of a chance to show events live. But even so, NBC will beat us over the head with figure skating, with a little bit of skiing and bobsled thrown in.

I don't mind figure skating. My wife is a former figure skater and that makes watching the event a little interesting. But I'd much prefer watching hockey or skiing. Most of all, I want to see a complete cross-section of the games. I want to see as much variety as possible. Yes, I will watch curling -- for a long time. There is actually a curling club just over the border from me.

On Canadian TV, you get that cross-section. They show the events as they occur during the course of a day. Also, there aren't as many overwrought, drama-filled features, you're not assaulted by whatever lame NBC program the network is trying to promote every commercial break, AND you get to see just about every sport in equal proportion.

There is a little bit of an emphasis on Canadian athletes, but unlike the U.S. network, Canadian TV will actually give a little publicity to the overall winners, whether they are from Canada or not. NBC often dismisses the gold medal winner if he or she is not from the U.S.

Fortunately, you can now watch the Olympics online and refine the specific events you want to see a little better.

The Winter Olympics are a very busy time for me at work. So I won't have a ton of time to watch. But when I do, it'll either be online or watching CTV (CJOH) out of Ottawa.

Two Packs A Day said…
yes, I'll be watching ATV (formerly Atlantic Satellite Network) for some Olympics coverage as the Canadians do the Olympics pretty good. Nice to have the choice of NBC and ATV to get a nice assortment of coverage. I don't watch Mexico because the last time I looked, they only cared enough about the Olympics to show about 2 hours a night of Olympics.

I can't blame NBC for doing what they do (or getting the IOC/VOOC to schedule stuff when they do) because I believe NBC pays the most rights fees of any Olympic broadcaster so they shoudl have a say in trying to schedule all the highly rated stuff in primetime or minimize the tape delay as much as practical.

I love in Beijing when the Olympic swimmers had most of their finals at 7 or 8 am so NBC could show it live. Imagine Michael Phelps and others trying to race in the morning when they might not have woken up yet and I bet most of their life, races have been in afternoon or evening.
February 13, 2010 at 10:38 AM

madding said…
I'm going to try and watch as much as I can online. NBC has severely reduced their coverage of the Games this year (and they're expecting to lose tons of money... gee... I wonder why.) And on the west coast we get everything on the main network three hours later than the east coast even though the Olympics are happening five hours from where I live.
February 13, 2010 at 4:47 PM