February 20, 2010
One of my favorite blogs, Dinged Corners, hasn't posted in a week. It's my hope that they're doing something delightful: vacationing, obsessing over the Olympics, or journeying to their favorite spring training site.

But, like dayf, I'm going to try to draw them out anyway with a direct DC reference. It's time to play the 6-in-30 game. This is the DC brainstorm where you pull six cards that make you happy, but take only 30 seconds to do so, or thereabouts.

Mine was more "thereabouts." I pulled six-ish cards in a minute and 30 seconds. I went directly to what I call my "vintage binder." This is a binder with sets that I have not reserved for their own separate binder because I don't feel I have enough cards from the set yet. I have several of these kinds of binders, but the "vintage binder" is special because, duh, it's all vintage. 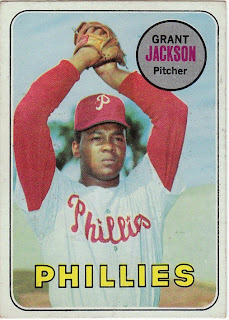 I'll start with one of my favorite cards from the 1969 set. I like it when the design colors match the team colors. To me, this is a great-looking card of a young pitcher. The '69 set has its flaws, but when it gets it right, there aren't many sets than can match it for pure card appeal. 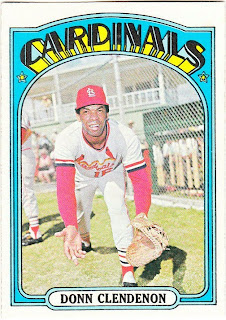 Here is a card from one of DC's favorite sets, the psychedelic tombstone set, 1972 Topps. It's also a card of a former Miracle Met. The best part of this high-numbered card is the variety of things going on in the background. You've got the bats lined up neatly off to the right, you have the fans seated at what appears to be ground level. And you have what appears to be a great-looking press box, which resembles a two-story back porch of someone's stately southern home. And it wouldn't be the '70s if everything wasn't tilted. 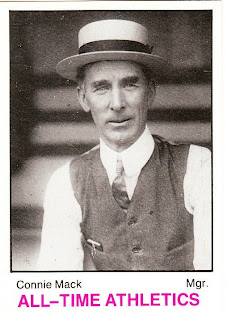 I recently received a double of this card in the mail. It's the only card I have of Connie Mack. It's from the 1983 TCMA set. Mack, of course, holds a record that will never be broken -- managing for the same team for 50 years. But I like the card because you don't see too many folks in baseball wearing straw hats. Mack was born 148 years ago this Monday. That's how long baseball has been around. 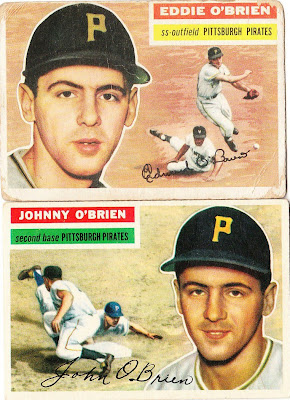 I'm cheating here by showing two cards as one. But they are twins, so I think I can lump them together.

The O'Brien brothers were one of the few sets of twins to play for the same team. My Johnny O'Brien card is in a lot better shape than Eddie O'Brien. 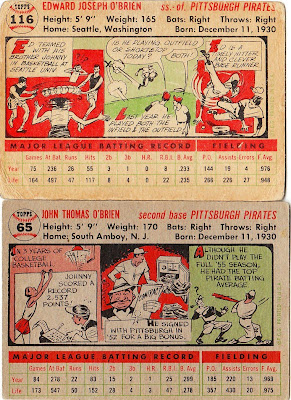 You can see on the back that Eddie is the more rare white back. You can also see that they were indeed born on the same day. Eddie was moved from the outfield to shortstop and that's when they became a novelty as double-play turning twins.

This card, which I don't have, features the two together. 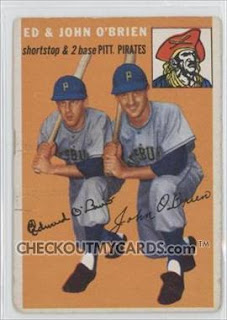 On the back of that card, it says the O'Briens are the first twins to play together on the same major league team. But my simple research found that wasn't true. Joe and Red Shannon played together for the 1915 Boston Braves. Later, fun-loving, bar-brawling twins Jose and Ozzie Canseco played together with the A's in the early 1990s. 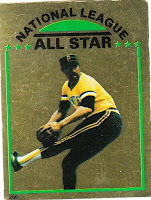 OK, I fudged on this one, too. It's a sticker, not a card. But given Jim Bibby's recent passing I wanted to show it.

It's from the 1981 Topps sticker set and it was my first encounter with gold foil. These showed up a long time before the gold-foil fascination (which we are still dealing with) of the 1990s. But I don't think it's the first time gold foil was used. The 1965 Topps Embossed cards featured gold of some sort, although I've never seen one in person.

Only the all-stars in the sticker set were featured in gold and we thought that was so cool as young collectors. It really made those players stand out. Jim Bibby wasn't a star of that period, but he had a great 1980 season and to see him in gold foil with players like Mike Schmidt and Pete Rose really made me proud as someone who rooted for underdog players like Bibby.

Unfortunately, Bibby is the fifth player from the We Are Family Pirates to have died. Willie Stargell, John Milner, Bill Robinson and Dock Ellis (he pitched in just 3 games for the '79 Pirates) have all passed. 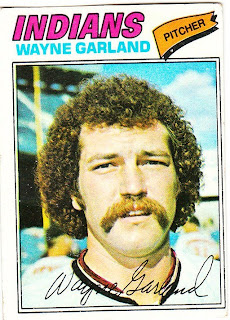 All right, enough with the seriousness. Here is a great card from the 1977 set that someday I will collect. The thing that I like about this card is not that it is wonderfully ridiculous, but that we collected cards like this as kids without appreciating how wonderfully ridiculous they were.

If you were a kid in the '70s, you saw people like this all the time, with their frizzie perms and their mustaches, and didn't bat an eye. It was the '70s, man. There were straight-laced crew-cut dudes, like those two coach-looking guys book-ending Garland in the background. And there were wild, long-haired, open-collared dudes like Garland, too.

I don't want to forget to mention that the coaches in the background are Orioles and Garland's neck collar is airbrushed Indian red-and-blue.

Garland was just coming off a 20-win season for the Orioles, and was one of the biggest busts of early free agency. But he remains the subject of one of my favorite cards of the '70s.

Play at the Plate said…
I can't get a post up right now but I wanted to try to get the word out that right now on Topps Giveaway, everything that has shown up in the last twenty minutes or so has been from the 60s and 70s.
February 20, 2010 at 9:31 PM