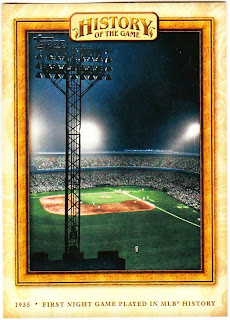 I know the awesome night card posts usually appear later in the week, but I need to do a pre-emptive strike here.

I couldn't resist going back to the card aisle today and grabbing a bunch of 2010 Topps packs. I felt short-changed by the blaster with the smaller number cards per pack. But mostly I went back because I think the cards are giving off pheromones or something. I feel quite drawn to them.

I pulled this night card out of the pack. It's from the History of the Game series, documenting the first night game every played. Just a couple days ago, Sooz, of A Cardboard Problem, alerted me to this card. When I pulled it, I knew that a few other collectors would think of me if they happened to pull it.

So, here's the pre-emptive strike: I'VE GOT THE CARD. No need to send it to me. You're very nice people. Very, VERY nice people. Quite generous in many ways. You prove your generosity on a weekly basis. But I really don't need to wallpaper any rooms with cards right now. So, gently put the card back in your card stack and enjoy it for what it is: An Awesome Night Card.

In case you don't have this card, the first night game took place at Crosley Field in Cincinnati on May 24, 1935. The Reds defeated the Phillies, 2-1 in front of more than 20,000 fans. The seven night games averaged more than 12,000 more fans than the day games. An extremely lucrative marketing strategy was born.

This card has got me thinking that I really need to feature my most favorite/significant night cards in a binder. So, I'm going to do that. Someday. But that will mean I need a duplicate of this card.

So, uh, forget what I said before. I, um, need this card.

Anyway, I wanted to post a select few more cards out of the packs that caught my eye. 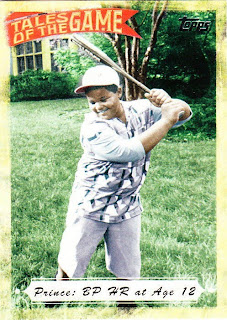 Here is a Tales of the Game card of young Prince Fielder. I never heard the story of him knocking a ball into the right field stands as a 12-year-old during batting practice. The card says it's a "legend," which means it may or may not be true. Fielder was 12 in 1996. It's not like there weren't any reporters or TV cameras around in the '90s. Didn't anyone document this? 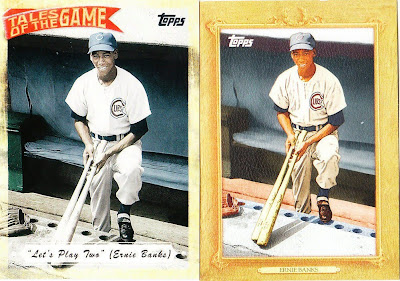 This puts a new spin on "Let's Play Two." The same Banks pose on two cards in the same set. There are lots of Ernie Banks pix around. I think Topps could have used something different on one of the cards.

Just for the heck of it, here are the Target exclusive mini 51 redbacks that I pulled. They sure are mini. My daughter would call them "cute." That they are. 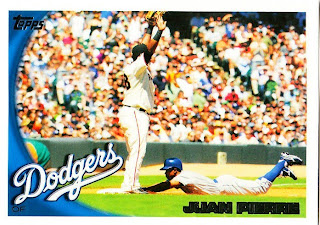 So far, I have pulled the following 2010 Dodgers:

The Juan Pierre card is terrific. I especially like it that he's doing something awesome against the Giants. I'm sure that wasn't hard for Topps to find. 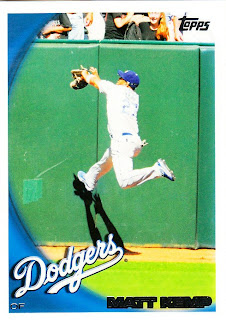 But this is the best Dodger card of all so far. It could be a best card of the year candidate, although it's very early for stuff like that. I do hope the ball is in Kemp's glove.

Finally, Topps seems to be in a celebratory mood this year: 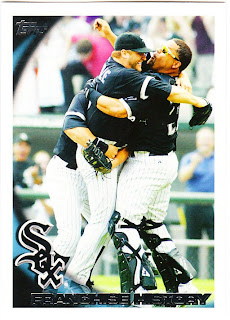 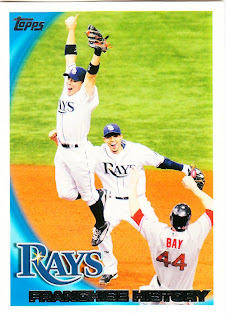 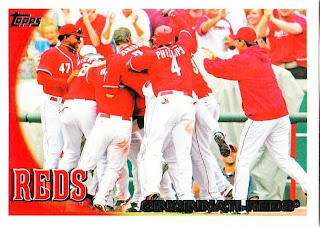 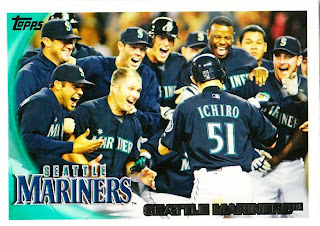 Have you noticed? Is it because they're logolicious?

Sooz said…
Baseball is fun and everyone is happy.

Joe from the D said…
About the Prince Fielder homerun...

total truth. I'm from the Detroit area, and was actually in attendance at that game. I was 18 years old and an autograph hound. I wanted a Cecil Fielder auto, dammit! So we're all waiting by the dugout for Big Daddy to come over, and we hear the "ping" of an aluminum bat. There's this huge kid in the cage strokin' the ball all ove Tiger Stadium. So we're watching, and this kid launches a shot to left field that almost nips the facing of the upper deck, probably a 350-360 foot shot.

BASEBALL DAD said…
I love the history set.I don't have that one yet! It is a great night shot.I plan to go after the History and Tales of the Game sets.And,of course, all the Tribe cards! Sooz, you're right. baseball is FUN.
February 2, 2010 at 10:50 PM

Play at the Plate said…
I'm guessing you'll get at least half a dozen of those within a couple of weeks. Tales of the Game is my favorite Insert followed by those mini red backs.
February 3, 2010 at 4:46 AM

Anonymous said…
Lurve the Red Back minis, totally gonna collect that set. Pulled Mantle and Chippah so far. Think I might go for the Tales and History sets too.
February 4, 2010 at 12:42 AM