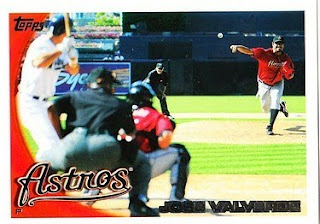 Thanks to the Wax Wombat and I Don't Know, I am very close to finishing off series 1 of the 2010 Topps set, which is pretty good considering I decided to complete the set less than two weeks ago.

WW and IDK brought my set wants to 16 cards, if you can believe my want list, which I wouldn't recommend.

I think I have enough of the set to do a review of what I believe are the best cards, at least prior to series 2 hitting the streets. I know you all have seen these before. But have you seen them in a tidy, top 10 countdown with sparkling Night Owl commentary? No, you haven't. Context is everything, people. And I'm bringing the context.

To come up with the list, I used a tried-and-true method: lay 10 cards out on a table, and then slide them down when you come across a card that should be on the list. Trust me. It works. It's worked since I was 9. Do not question the card-sliding method. It's better than science.

In the event that one of the missing 16 is so amazing that it deserves to be on this countdown, I will update this countdown. But they'll have to be exceptional cards. As it stands, I knocked off (or slid off) a bunch of cards that I like. Those included Joe Mauer, Carl Crawford, the Rays franchise history card and Jose Valverde, up top, which I thought would be on the list but ended up being card No. 11 (Valverde's too much in the shadows).

OK, for your viewing pleasure: 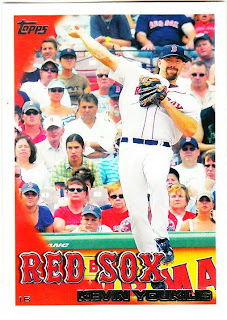 10. Kevin Youkilis. I count no less than 31 people in the stands watching the Greek God of Walks throw to first base. "Faces in the Crowd" photos are endlessly fascinating. We just published a similar photo from a girls basketball game in our newspaper last night. That was interesting, too, in an "awful high school basketball" kind of way. 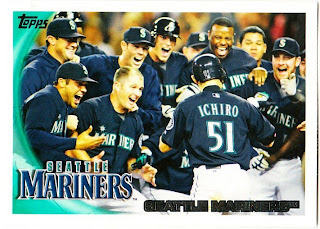 9. Seattle Mariners. I wish there were manager cards in this set. But Topps was in a celebratory mood and managers are so damn grumpy. So Topps relegated managers to the back of these team cards. This is the second-best celebration shot in the series. Another "faces in the crowd" moment. 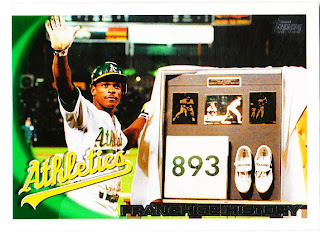 8. Athletics Franchise History. This is the perfect way to get a Hall of Famer in your main set without going the annoying short-print route. How cool to need a Rickey Henderson card to complete the base set! I also like the Franchise History cards a lot. Every team has a unique history. Even the Rockies. That should be recognized. 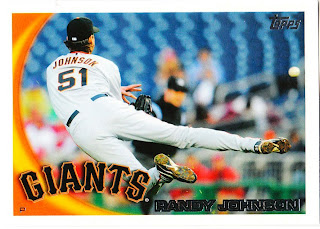 7. Randy Johnson. Some people don't like this card. I think that it's crazy good. Consider all the hang-ups of mine that it had to overcome to get on this list: I don't like the Giants. I don't really like Randy Johnson. I don't like the backs of players in photos. Yet, Topps overcomes all of that by showing a 6-foot-10 guy off his feet and getting his entire monstrous frame in the shot. Damn, that's good. (Athough the logo does get in the way a bit). 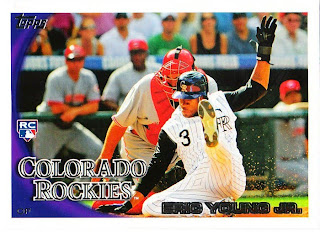 6. Eric Young Jr. A nice home-plate action shot with dirt flying and Young Jr. high-stepping. The Reds' uniforms help add some color to the card. If Young was playing some colorless team like the Blue Jays (bring back the BLUE in Blue Jays!), it wouldn't be as interesting. 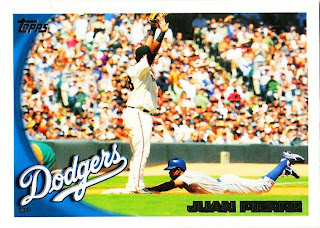 5. Juan Pierre. I love action shots that also take me to the ballpark. This gives the impression that you're looking at the play through binoculars. I love the large crowd, even if they're rooting for the wrong team, and I love that Pierre is sticking it to the crowd. 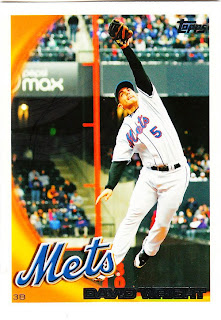 4. David Wright. Mr. Met giving his all. Giving to the max, you could say. Giving to the Pepsi Max, even. But blatant product placement aside, the shot is one you don't see much on a baseball card. And Wright's emerging tongue makes the photo. 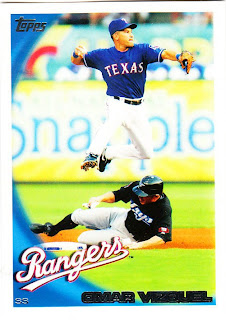 3. Omar Vizquel. The dude is 42 years old and he looks as graceful as ever making the double play turn on this photo. Now that Vizquel isn't a Giant, I can like him again. This card helps. Also, I'm suddenly thirsty for something non-carbonated. 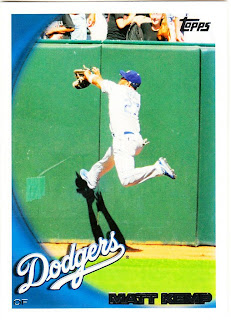 2. Matt Kemp. A little biased because it's a Dodger, but this has to make everyone's top 10. Outfield shots are not easy to get and Kemp appears to have just made a terrific snare of a long drive. Yes, red-headed missy in the front row, that is an awesome play from a future MVP. 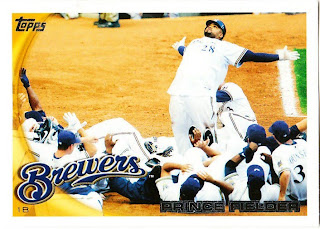 1. Prince Fielder. OK, again, this photo overcame a lot of my pet-peeves to make it to the No. 1 spot: Fielder is a bit annoying in a hyper sort of way, and I believe choreography has NO place in baseball. However, when you think of Fielder and 2009, you have to think of this moment. It was so unique that even someone like me had to stand and applaud. And it was a one-time thing. If the Brewers ever trot this out again, I hope the Cubs beat them every game this year.

By the way, exactly how much free time do ballplayers have?

I do plan to dig out some worst card candidates when I get some time. I noticed some Topps cards that made me wince. But I think more card sets need to be released before I get a true sense of what kind of crap is really out there. Because even though people thought Topps in a one-MLB license town would mean that Topps would mail it in, it's obvious that it didn't.

BigD said…
I agree that the Prince card is the best of the set so far. I loved it the instant I saw it. Then again I loved all the endzone celebrations in the NFL. They need to bring those back.
February 23, 2010 at 10:41 PM

madding said…
Number one, the logo gets in the way on every damn card. Number two, the Prince Fielder card is a good representation of why I hate the Brewers now more than ever. Their annoying shirt-untucking antics and all the other crap they pull when they haven't won anything lately and shouldn't be in the National League just really pisses me off. (They should have made a card out of Fielder's attempt to bust into the Dodgers locker room last year.)

Eggrocket said…
Just an update. I got the tip from this site that the million card giveaway was churning out a bunch of 50s & 60s cards so I grabbed a bunch at Target tonight. My "prize" was a 1980 Bake McBride (yawn) but I actually pulled a gold parallel of the Prince Fielder card! (Numbered 666 no less! I'm not a devil guy but I love repeating numbers). I also got an Ebbets Field and a CMT 1953 Jackie Robinson.