Where my love for baseball history was born 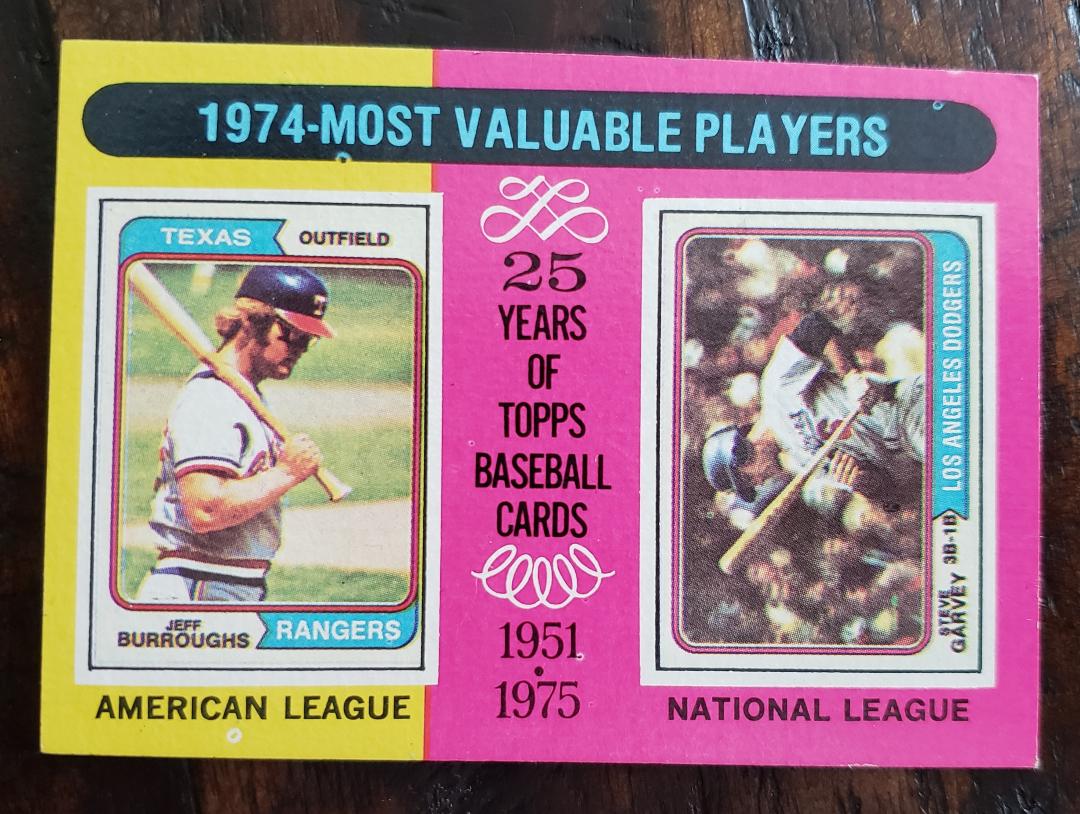 I don't know where young kids today get their appreciation for baseball history. Maybe it comes from their mom or dad, or their baseball coach, or from seeing an old game on youtube, or some ESPN 30-for-30 show (when the network isn't obsessing about basketball).
I just know that they're probably not getting their baseball history knowledge from baseball cards.
Topps has been very piecemeal about the game's history the last 15-20 years. You still get the legends of the game with your cards, but they're more difficult to find, usually banished to an insert set or a short-print -- unless you pick up a set like Archives. But even then you're only going to see the legends that have a contract with Topps, in other words, only the legends they want you to see.
I'm sure this is more the fault of MLB than Topps -- MLB wants everyone focused on TODAY'S STARS because it can't make the most money off of old, dead ballplayers. But I think this approach prevents youngsters from really connecting to the game. Finding out about a sport's history, how we got here, is how you form that bond, that true love for the sport.
I know when I first started collecting and following baseball, I was all about the current players, too. But then, during that first year I collected, Topps issued a subset filled with the game's past stars. It was 24 cards featuring the previous 48 baseball MVPs since Topps issued its first set in 1951. 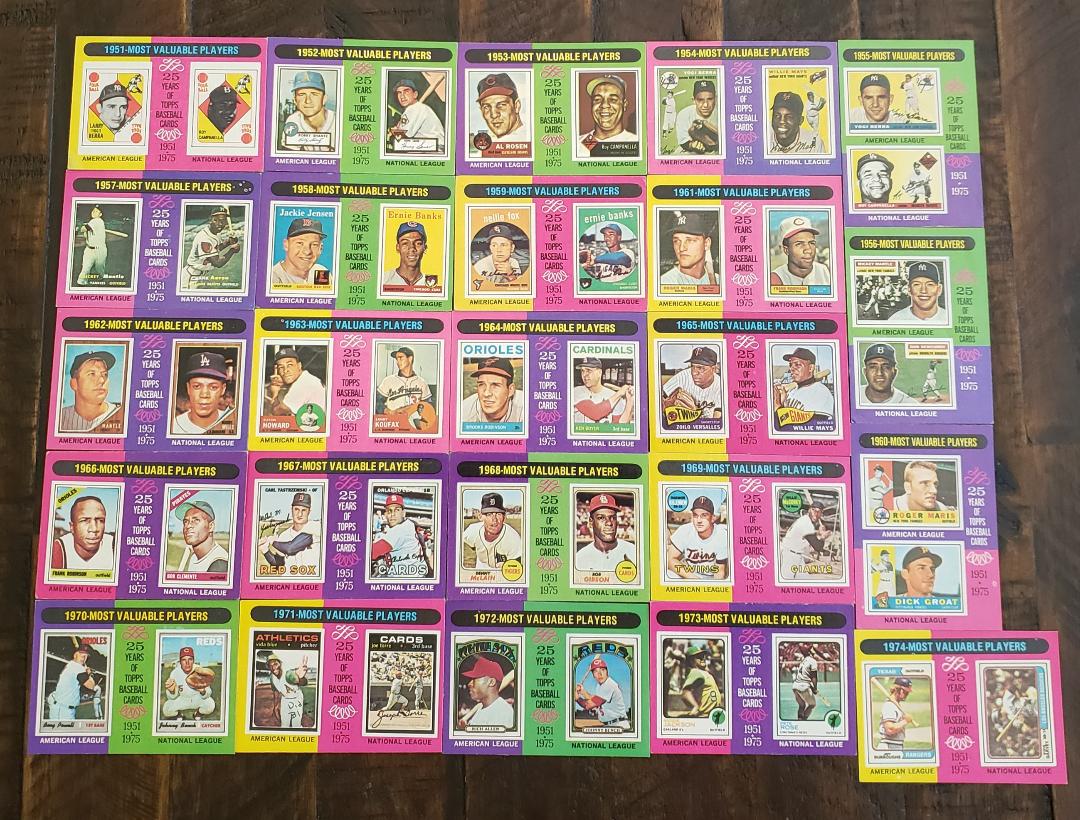 This subset gets criticism as being one of the first of many examples of Topps' habit of self-congratulation. I've piled on as well. But, also, this is the set that gave me my first glimpse of baseball history. I knew nothing about the game's past at the time. These cards, which featured the cards of past MVPs issued the year they won the MVP (what a cool concept), were my introduction to those players.
Every once in awhile someone will write a story or a blog post about an MVP of the past, someone who has been forgotten and few people today know -- and I'll think, "I saw that player's card the first year I collected cards. I've known who Bobby Shantz was since I was 9."
That's what the 1975 MVPs subset did for me.
Chances are, I knew who Mickey Mantle and Johnny Bench and Roger Maris were at that time. But that '75 subset was my introduction to: 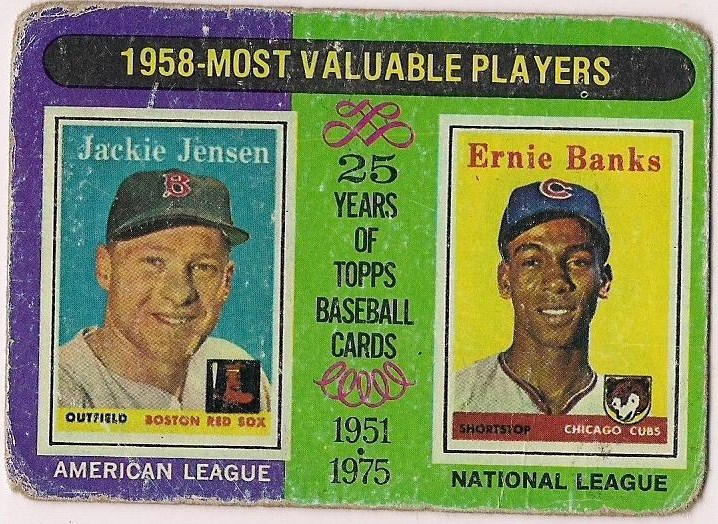 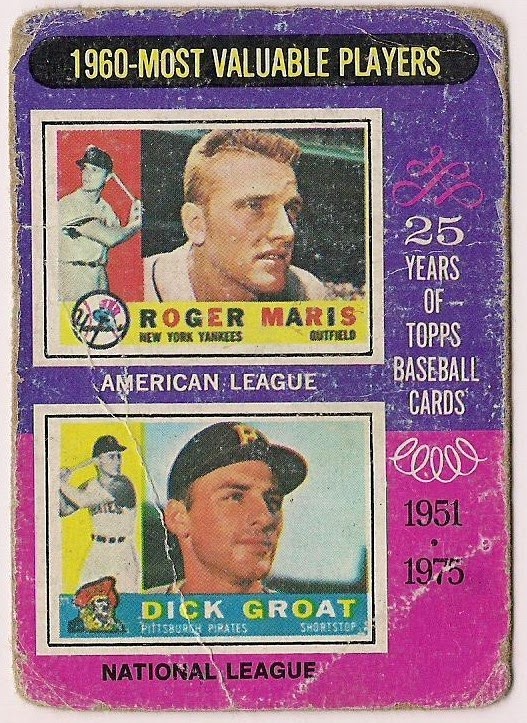 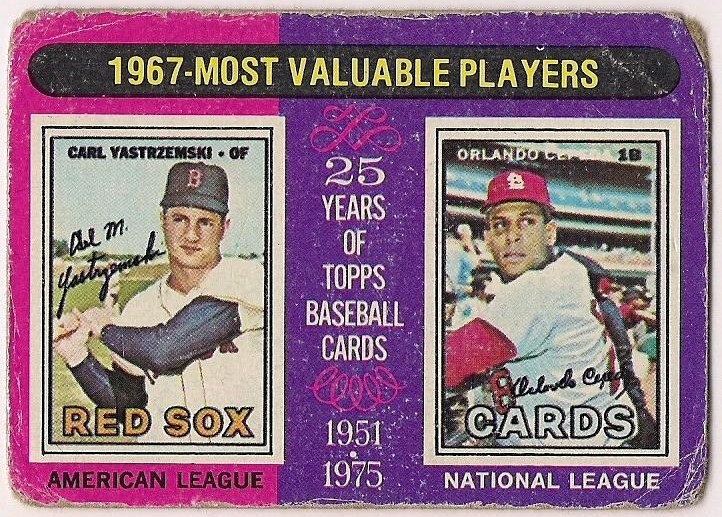 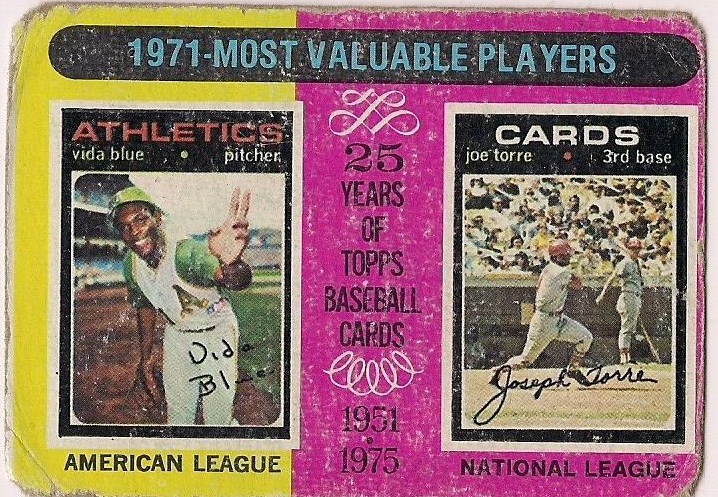 Vida Blue and Joe Torre (I never pulled their '75 cards). 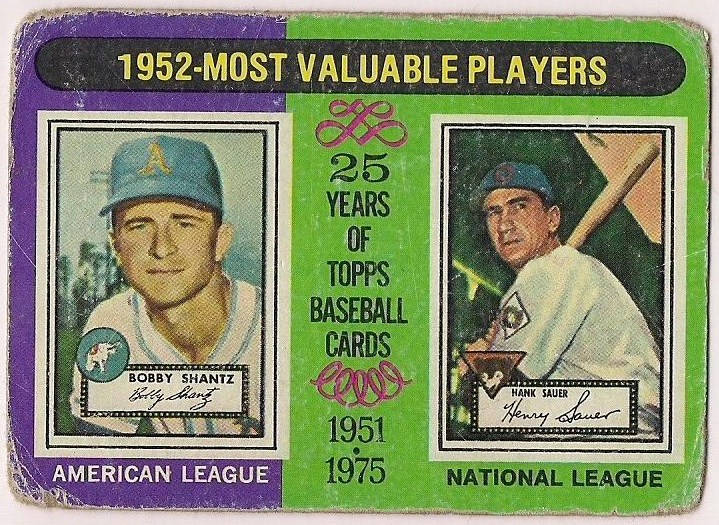 And Bobby Shantz and Hank Sauer.
I knew who all of those guys were as a 4th grader, probably long before I should have. I'm sure I could've gotten beaten up on the playground if I started spouting off about how "Dick Groat's sparkling play at shortstop helped the Pirates to the NL Championship and a World Series win over the Yankees."
All of the above cards are the originals that I pulled out of packs in '75. I have quite a few of the '75 MVP cards left from that time. I don't think it's a case of those particular cards being double-printed or me hoarding them. My guess is that kids weren't much different then than they are now -- they cared about the players who are playing NOW and couldn't be bothered with "old guys," so I likely couldn't use those cards as trade bait.
But, good thing, because I was able to study those cards as 9-year-olds did back then, and kick off my love for baseball history. (I don't want to tell you how long it took me to know who Zoilo Versalles was because I never pulled the '75 card of the '65 MVPs).
After that first year of collecting, I remember reading a biography on Sandy Koufax around 4th or 5th grade. I started reading other historical baseball books in the following years, "The Glory of Their Times," etc. I started ordering through the mail TCMA cards, which were all about the greats of the past. And I pined for the Renata Galasso sets advertised in Baseball Digest that celebrated the stars of the '50s and '60s. And I read magazines like BD and SI that always included historic articles.
Baseball history became interesting to me and it all began with that '75 subset. 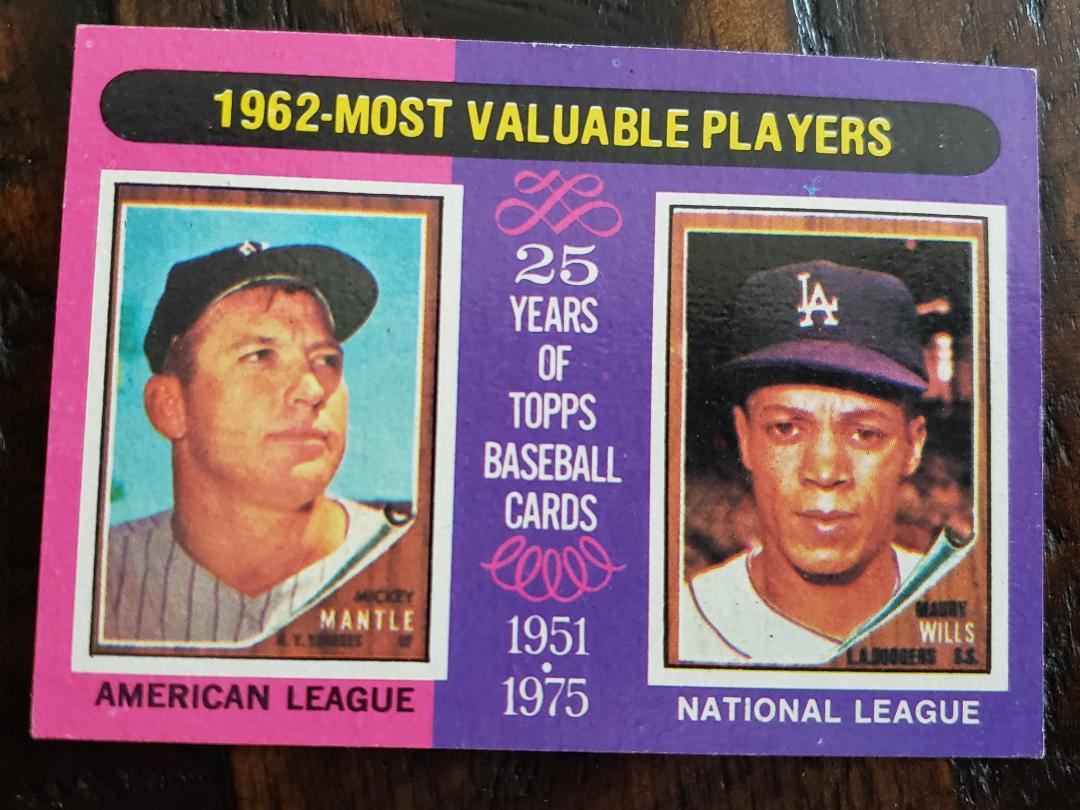 That subset also gave me knowledge about cards that I can use to annoy the heck out of people.
I don't know how many times I've had to point out to people, who say that the '62 Maury Wills card isn't a real card and that the image was created for the 1982 Kmart set or the 1987 Topps Turn Back the Clock set, that it was ACTUALLY CREATED FIRST for the 1975 Topps MVP subset. I enjoy doing this far more than I should, one, because I hate seeing false information, but also, I try to counter the pervasive myth that I see all over the internet that the card world began with the 1987 Topps set. 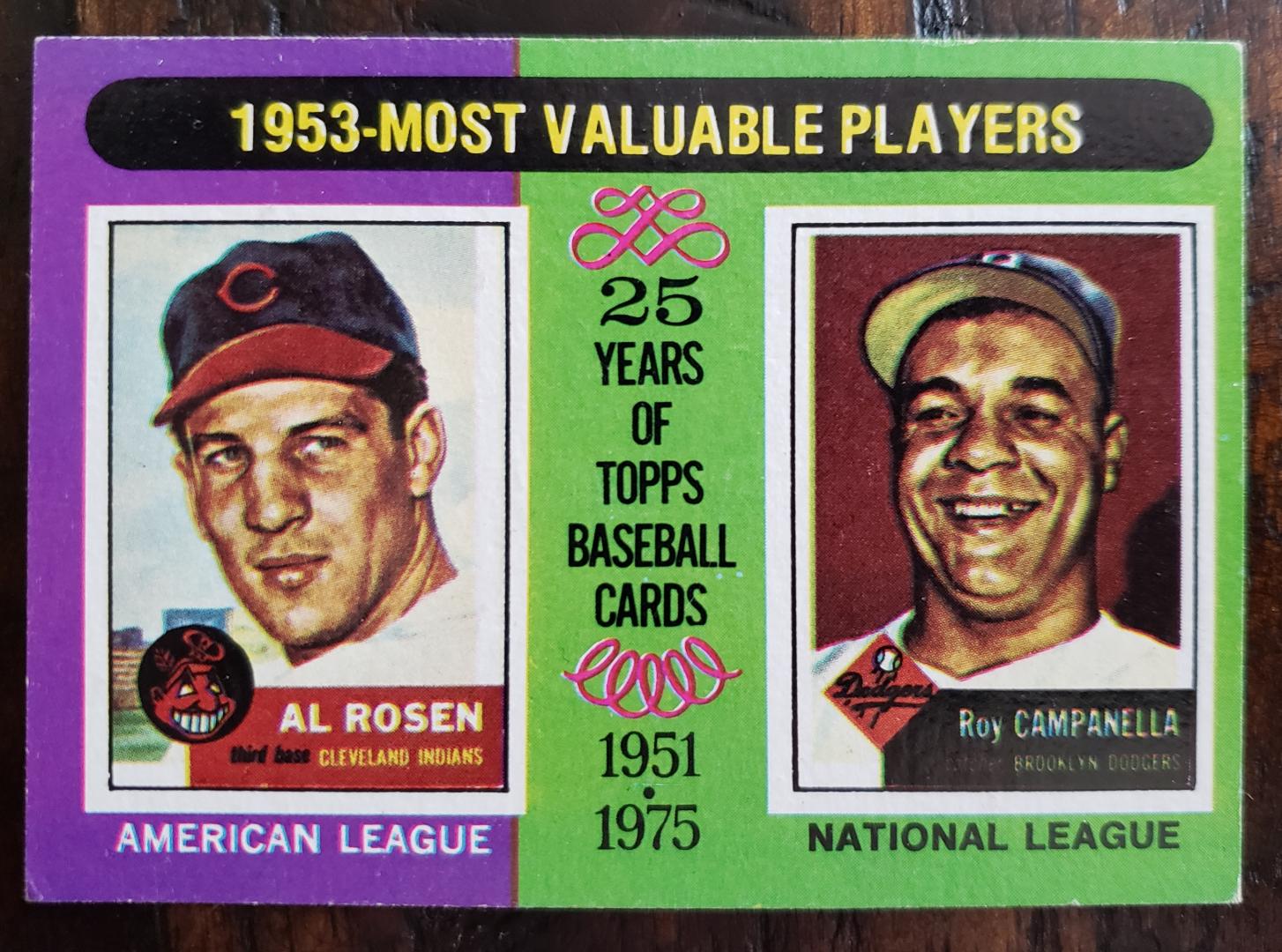 Nope, baseball history didn't begin with Canseco & McGwire or the Home Run Chase in 1998, or Mike Trout's rookie season, or even when Al Rosen and Roy Campanella were the talk of the 1953 season.
My love for baseball history began in 1975. But baseball history itself is more than 150 years old.
Kids may not be all that interested in those "old dudes." But if you slip some history past them a little more often than the periodic insert of Jackie Robinson and Cal Ripken Jr., maybe you'll hook them for a lifetime ... instead of just a handful of years until the next shiny thing comes along.

Old Cards said…
Great post! My two favorite subjects - baseball & history. Put them together and what could be better? As a kid of the 60's, baseball started for me in 1961. Aaron, Mays and Mantle were the current players and I collected their cards, but I also collected the 60 and 61 Fleer greats and discovered players like Zack Wheat & Arky Vaughn. I read about Ted Williams and Babe Ruth, especially Ruth since Maris was chasing his record. I must admit, it was somewhat of a letdown the following seasons when there was no homerun record chase, but I was hooked on baseball like no other sport.
June 11, 2021 at 7:17 PM

Jeff B - Wax Pack Wonders said…
There were these blue hardcover books when I was a kid. Short biographies of some of the legends of the game. I think those had the biggest impact on sparking my love of baseball history.
June 11, 2021 at 8:20 PM

Fuji said…
I know I've commented on this before... but I think it's so cool that you have the original cards from packs you opened back in 1975. As for learning about the MVP's... I do remember seeing these subset cards... but most of my knowledge came from the 1982 Kmart set you referenced.
June 11, 2021 at 11:16 PM

Baseball has had a problem with promoting it's past since FOX first got the MLB rights, and said that it's announcers weren't allowed to talk about any "old, dead guys."

Baseball cards were a great way to learn about baseball in the late 1960's/'70s.

Brett Alan said…
Right on...those 1975 MVP cards were a big part of my learning about the history of the game. Also have to mention the All-Time All-Stars the following year, and the similar all-time greats set put out by Kellogg's in 1972. Although I also have to mention all the books I used to buy from Scholastic--those were big, too.

Last night when I was watching the Mets game, the fans were chanting "MVP!" for deGrom, and it occurred to me that he has a horizontal card this year, so if they re-do this subset in 2024 Heritage (and use flagship cards instead of, or as a variation to, the Heritage cards), him winning could lead to one horizontal and one vertical card on the same card. So of course that made me wonder whether that was true in the actual subset, and I was proud of myself for coming up with Garvey and Burroughs on the 1974 card.
June 12, 2021 at 11:59 AM

Nick said…
I sometimes forget how much cards have shaped my knowledge of baseball history. A lot of the legend-based sets on the shelves when I was a kid - 2001 Topps Archives, Fan Favorites, UD '70s, etc. - were probably my first introduction to a lot of the more second-tier greats not named Mantle or Ruth. Books were also a huge source - I try to read at least a few baseball books each year, and I'm still surprised by how much I learn from them. (Also thought you might like to know I'm reading Roger Angell's "The Summer Game" right now!)
June 12, 2021 at 12:16 PM

Also I got fascinated with All-Time baseball lists from the World Almanac that was published back then.

Around 1978 (when I was 18) I was at our local bookstore and picked up a softcover book "the Complete book of Baseball Cards" By Steve Clark written in 1976 with neat color pictures of tobacco cards with cards thru 1976. This hooked me on baseball cards.

My love of baseball history came primarily from books in my elementary school library. I wore out Baseball's 100 by Maury Wills. There was also a set of hardcover books with the history of each team. Here's an example of the Dodgers one: https://archive.org/details/losangelesdodger00bran

I also had a book of reprints of baseball cards of Hall of Famers. You could cut them out and pretend they were real cards. Learned a lot from that one too.
June 12, 2021 at 6:28 PM

Chris said…
I learned a great deal of baseball history from books but certain things stuck with me because of baseball cards. Topps' Turn Back The Clock subset was helpful, and so were the Score inserts that looked like mini-Sportflics.
June 13, 2021 at 6:10 PM

Nick Vossbrink said…
I was lucky to grow up in the heyday of Hygrade/TCMA/Pacific/Cramer/Swell/TedWilliams tribute sets. Was hard for me to NOT learn about baseball history from cards. But yeah I also liked the Turn Back the Clock cards in 1986-1990 Topps as well as the Score and Sportflics mini inserts.

A shame that my kids never got that experience. I did get them a set of Panini Cooperstown to read through but it's not the same. And the way Topps killed retail didn't help either. The 125 years of baseball inserts a couple years ago in Flagship and Opening Day were actually fantastic for this purpose. But by being inserts no kids ever got enough of them to actually learn anything.
June 13, 2021 at 9:41 PM