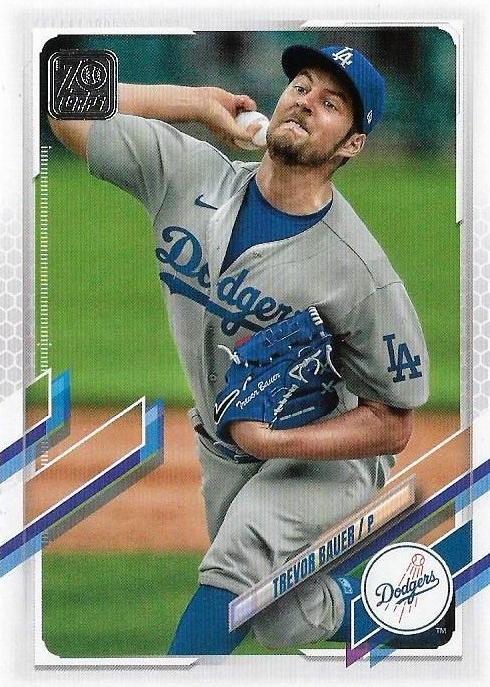 Topps Series 2 is here and it means even less than ever:
1. You can't find it on any shelf or even on a certain big box store's web site (I received a gift card to Target for Father's Day with the intent of me ordering up some cards remotely. But I should've received one from Walmart because at least they have packs available).
2. It still features that irritating Bowman-esque design that makes me fear for the direction Topps flagship is headed.
3. I like vintage so much more than I did even five or six years ago.
Buying Series 2 is always somewhat pointless and a rather shameful process actually. In fact, Series 1 and Series 2 sums up that old adage, which should be a meme:
Just purchased Series 1: shame on you
Just purchased Series 2: shame on me
If I like the design and am actually collecting the set, then, yeah, I'll go nuts on Series 2. But otherwise, what am I even doing? I already know it's icky from viewing all the Series 1 cards.
It took me a few years of blogging to figure that out. But with designs like 2016 and 2017 and the dearth of product available in 2020, I've come around. If I dislike the set, I'm not buying more of them just because Topps changed a number.
So, like I've done the last couple of years, I simply added the Dodgers team set. This time I nabbed them from TBS Sports Cards, aka, BigShep, aka, Tim, who I know from the About the Cards podcast. He was offering up some Series 2 team sets and I quickly grabbed what I needed.
The Series 1 Dodgers set was 20 cards large, mostly because of those extra World Series cards. The Series 2 set is only 11 cards. But unlike recent past years, all of the Dodgers pictured in Series 2 are key components of the team. (I know this isn't the case for some of the other teams for Series 2).
Here are the Series 2 Dodgers: 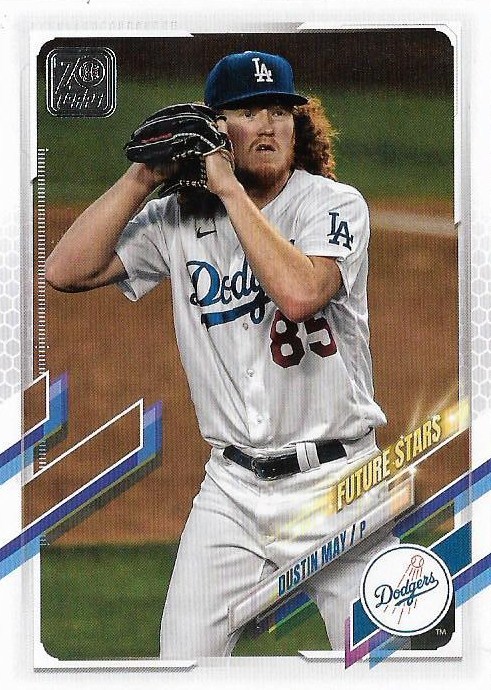 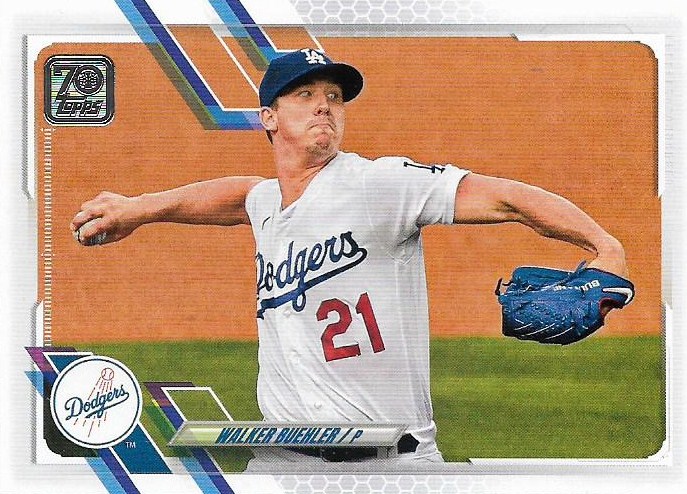 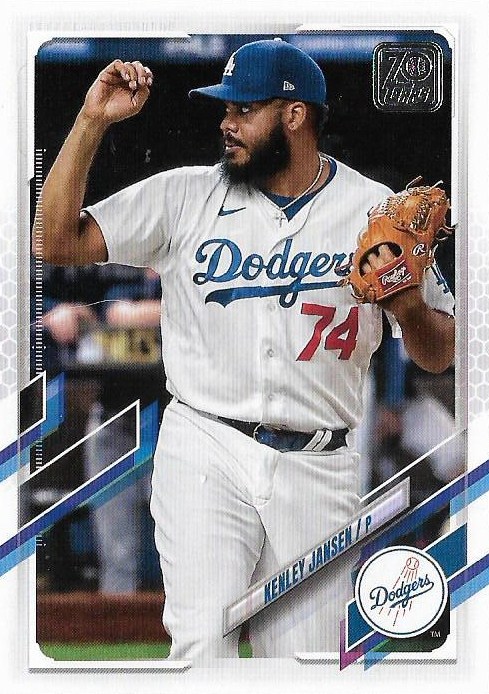 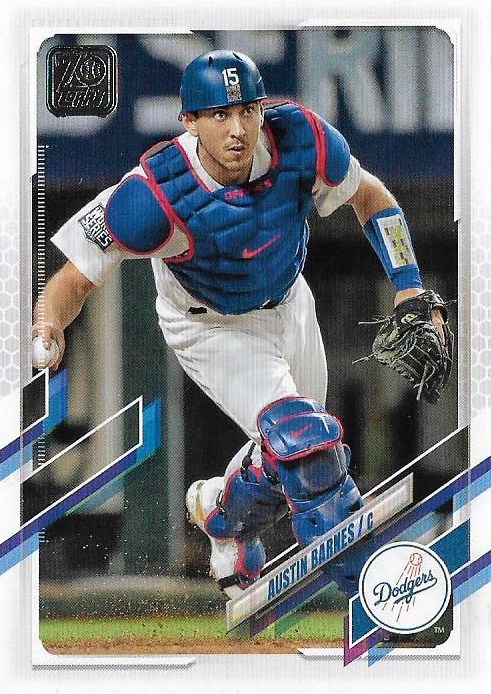 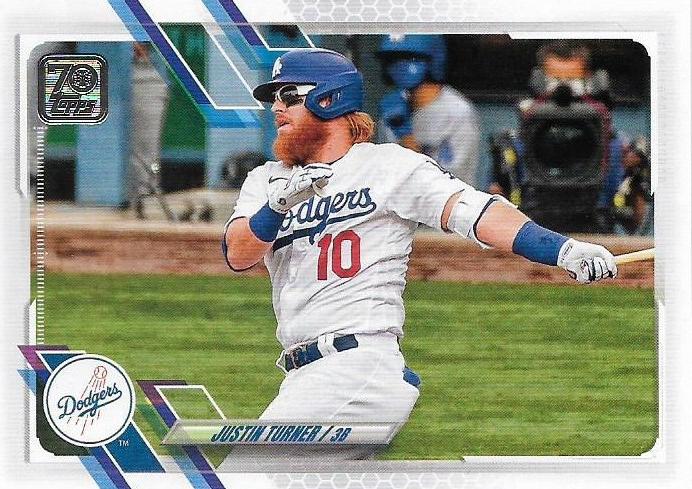 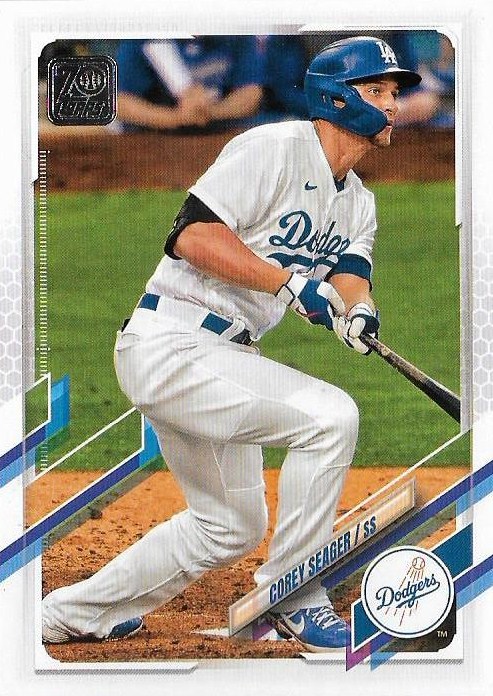 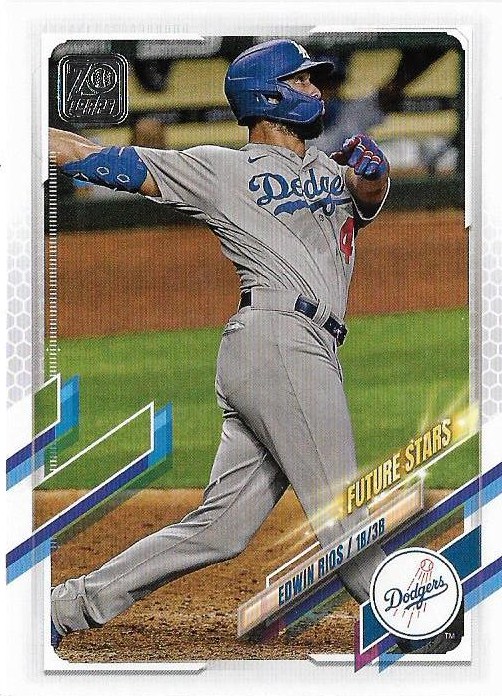 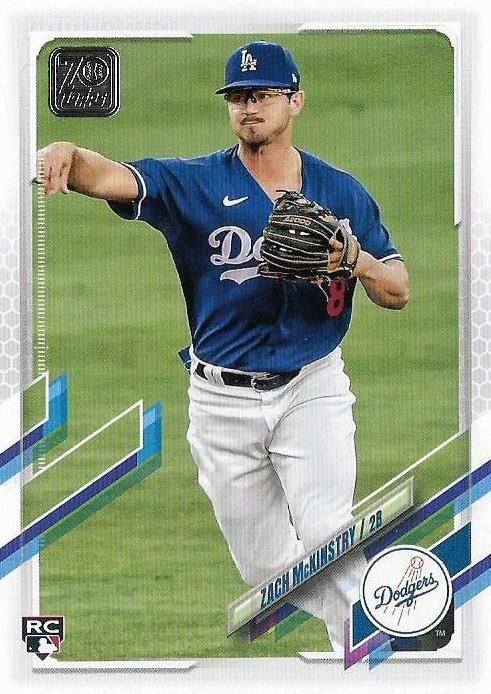 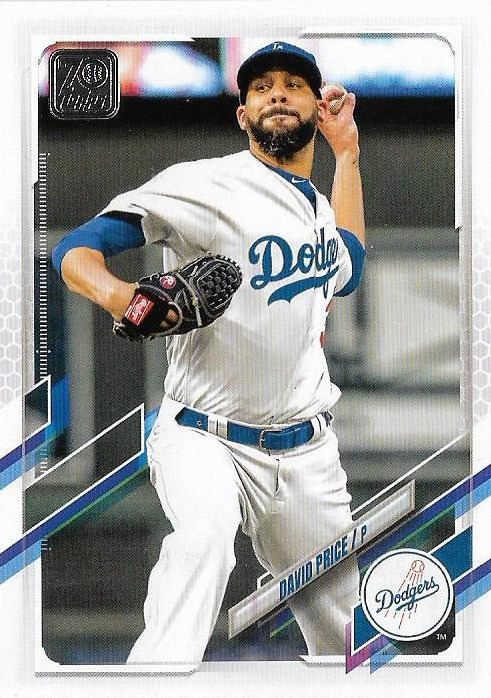 Obviously Dustin May is now out for the season and Edwin Rios has been disabled for awhile, but Topps couldn't have anticipated those. The Zach McKinstry is a timely addition. But I think David Price needs to start proving he deserves to be on a baseball card. 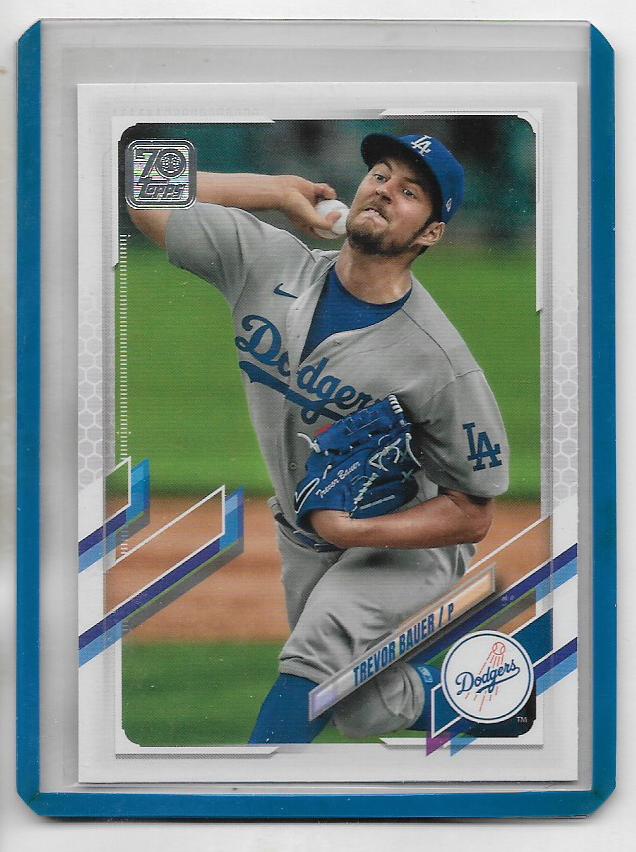 BigShep threw the Trevor Bauer card into a blue top-loader, which I really appreciate. I've already rambled about how much I enjoy colored top-loaders and I definitely should have more blue ones. I'm pretty certain that's not a real Dodgers uniform but it is Bauer's first legitimate Dodgers card (sorry, Topps Now, you'll never be legitimate). 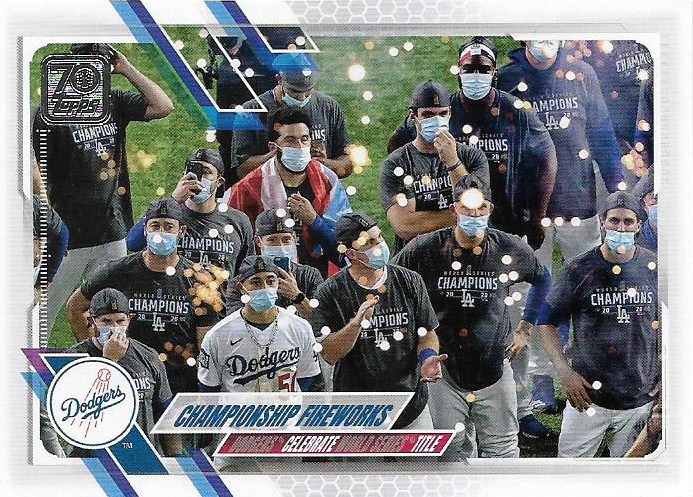 Here's the last card. Masks and lights everywhere. I really love those sparkly lights, which I believe are remnants from the fireworks during the commissioner's trophy presentation. Check out the cell phone mugging. But Mookie Betts is always the professional. Max Muncy is grasping his mask in the lower corner. 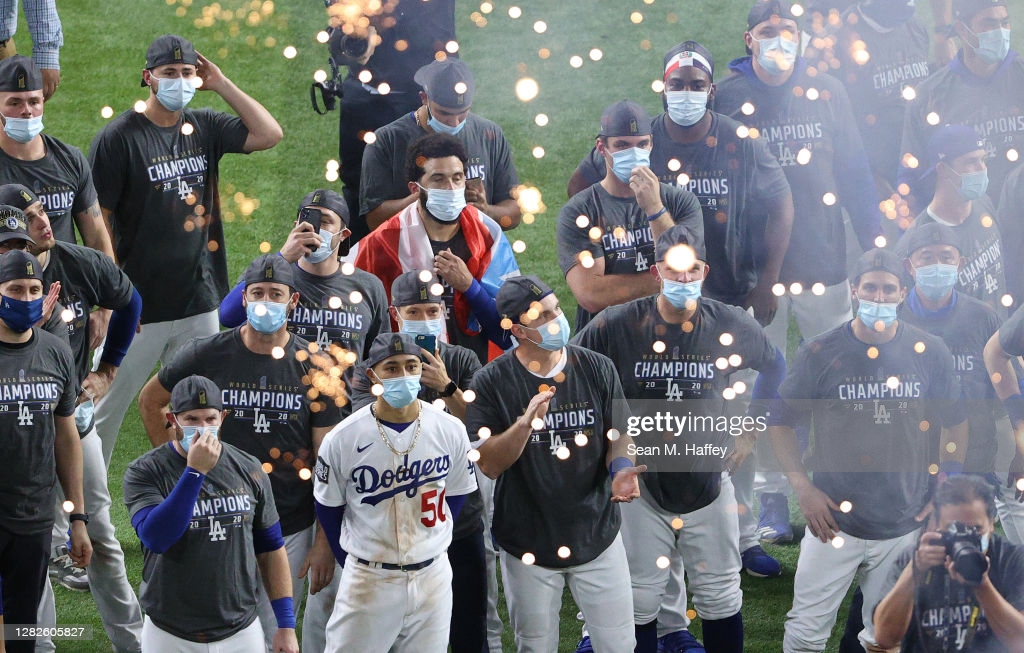 This is the Getty Image that was used for the card. Julio Urias on the right and Corey Seager and Gavin Lux on the left were cropped out of the photo. The guy next to Lux (I'm terrible at facial recognition, especially when everyone is wearing masks) had a 70th anniversary logo plopped on his face.
As for the cards themselves, it's more of the same. Too much tight-cropping that makes the players look like they're confined (Jansen looks like he's going to bend the borders). The names are almost impossible to read. And the slashy slashes interfere too much with the photo.
I also wish that Topps would stop using profile batting shots that show the face protector. The player's face is obscured, canceling out one of the main reasons why I buy cards -- to see the player's face. The Rios and Seager cards are almost useless.
So, obviously, with those complaints, there's no good reason for me to be trying to buy other cards in Series 2 when all they feature are teams that I care about much less or not at all.
I'll be putting up the want list for all the inserts and parallels, obviously. But my main objective for Series 2 is that familiar baseball phrase:
Get 'em on (purchase those cards online!)
Get 'em over (request shipment!)
Get 'em in (into my collection!)
Done. Run scored.

John Sharp said…
Its definitely frustrating trying to buy any cards. The only way I get any are from eBay, trades, or RAK on Twitter.

Jamie Meyers said…
I would agree that's by far the best way to collect a team from this set. Gotta say, that celebration card is sad. They all look like they're watching a building burning down instead of celebrating a championship. But that was pretty much 2020 in a nutshell, wasn't it?
June 21, 2021 at 9:21 PM

Doc Samson said…
I have thrown in the towel in buying any series 2 cards due to availability and more importantly, quality. Thankfully, Mr. Owl put on his bomb squad padded uniform and shared these with us. One more thing: why doesn't Topps ever do something different with their series 2 set? Sure, Donruss 91 was completely insipid, but at least their series 2 had a different colored border. Then again, asking Topps to do some out-of-the-box thinking is like trying to teach a dog to use the internet.
June 22, 2021 at 9:31 AM

Fuji said…
I just complimented Topps on their ability to use photo editing software over the weekend... but I take that back after seeing the Bauer.

Buehler always seems to get nice base cards. And that Championship Fireworks card is cool.
June 22, 2021 at 10:18 AM

GCA said…
Buehler and Turner have the mind control rods sticking in their heads, and a couple of the guys in the celly shot are about to as well.
Bleah Flagship. I'm over it.
C'mon Ginter...
June 22, 2021 at 10:59 AM

Matt said…
Shame on me, for I bought a hanger of Series 2 at Wal-Mart when I saw it.

Nick said…
Series 2 was the first time I bought 100 percent of the base cards I needed on the secondary market (Sportlots) without even so much as looking for retail. Not driving to Walmart in the slim hopes of finding a set I don't even like. I see myself doing this more often in the near-future (especially with Stadium Club) because it's way less stressful.
June 22, 2021 at 12:45 PM