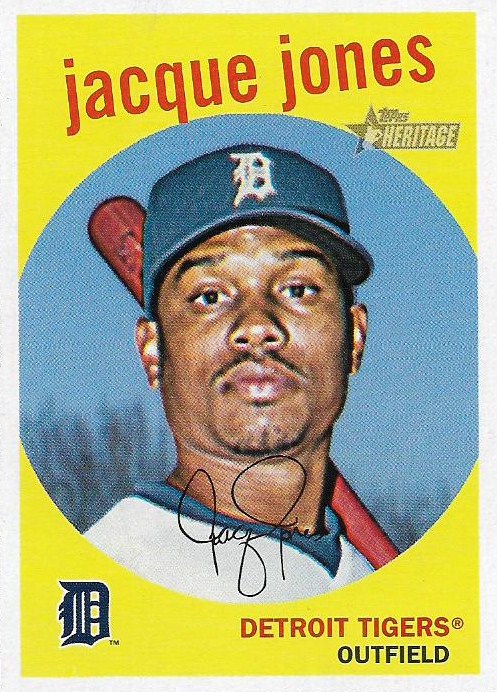 Each Saturday, I roll out of my nest, stumble down the tree and pad over to the mini-fridge for the daily cold coffee (black only, please).
I take a seat at the computer, fire up the card blogs and note once again that there are a handful of blogs that show up on Saturdays only.
I admire that -- posting just every Saturday. I can't do it myself, but I like the concept. A lot.
It reminds me of the Saturdays of long ago, when I was off from school and the entire day stretched before me. I know this remains a common Saturday feeling for many people far into adulthood, but Saturday ceased being a day of recreation for me around 1988 when I landed my first job in the newspaper sports department. Saturday suddenly became the busiest day of the week, and with only a slight blip in 2011-12 for an ill-advised, ordered schedule change, it's remained that way for more than 30 years.
So the idea of a free Saturday, with time to type out that blog post, with tunes playing in the background or maybe even cartoons on the television, sounds idyllic to me. Yes, of course, a time with no obligations means the thoughts can run free!
I like it so much that I decided to post today, even though Saturdays are usually a day off from blogging for me -- mostly so I can focus on the work ahead.
I wanted to show off a card I received from Mike of A Life Shaped By Baseball. He responded to my blog post last month in which I mentioned that I was three short-prints away from completing a dozen-years quest to finish the 2008 Heritage set.
The Jacque Jones card was one of those SPs. It's been going for crazy prices on ebay. At the time, I showed the only one available and it was selling for a ridiculous $89.95. Go to the site now and there's still only one available. It's selling for $77-plus. Still ridiculous.
So I really appreciate Mike reaching out. He mentioned in a note that he doesn't think even Jones, who made millions in his career, would pay $89.95 for his card. Mike also mentioned that he thinks he pulled the Jones card a long time ago from an ebay lot or repack. So, there you go, ebay anglers, I hope you sit on that boat for two decades waiting to hook your fish.
It's taken me that long to get the Jones card but at least I paid nothing for it.
Since this card is so unavailable -- there's only one on sportlots and it's selling for $70, and it's sold out on COMC -- I better show off the back for those who've never seen it. 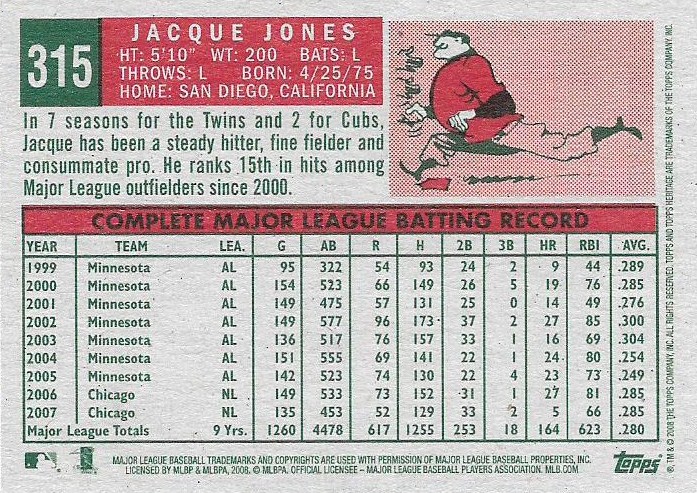 Did that cartoon with no words on it jump out at you like it did for me?
Apparently, all of the Jones cards have that goof. And best I can tell is it's not any homage to '59 Topps as card No. 315 in that set (Joe Adcock) has a cartoon with words. Maybe a '59 Tiger has a cartoon with no words? I'm not looking them all up. It's a Saturday.
All that's left for me now to complete the set is the Kevin Gregg and Jon Lester SPs and someone is sending those to me as well. And then we're going to have a big ol' party because that's way too damn long to be spending completing a set from 2008. Yes, there will be beer.
So, there's your first Saturday post from me in I don't know how long (again, not looking it up on a Saturday).
Just don't count on a Sunday post. Sunday is my Saturday.

Matt said…
Your mornings especially Saturdays sound like mine. Sundays are the same as well
June 5, 2021 at 8:45 PM

steelehere said…
Congrats on the upcoming completion of this set. Your year in review is going to have quite a diverse list of completed sets.
June 5, 2021 at 9:06 PM

Jon said…
Hard to believe anyone would actually pay that much for that card! Nice to know though that there's someone out there who'd rather see a card like this go to somebody who needs it, than trying to make a quick buck off of it.
June 6, 2021 at 8:29 AM

Fuji said…
When I was blogging on a regular basis, Saturday mornings were great for hammering out at least one or two posts twice a month. The other two Saturdays were spent at my local flea markets.

Nick said…
I haven't blogged on a weekend in a long time - these days I'm lucky if I get a single post up during the week! Glad someone sent you that Jacque Jones, because I was getting a bit guilty about hanging onto mine. I only know of one other card that shows him with the Tigers (08 UD).
June 6, 2021 at 11:00 AM

Mike said…
Happy that it arrived in good time - I'm always worried what with the current fun USPS dynamics. ;) Good to know that the last two cards to complete the set are also on the way.
June 6, 2021 at 12:31 PM

bryan was here said…
That's funny to me. I think you could pick up an entire Jacque Jones collection, including team sets and the like, for a lot less than 89.95. In fact, you could probably slide the decimal point one spot to the left and you would be good. I mean, when you can still probably pick up any decent superstar card from the '70s for a lot less than that, that shows the market has gone bananas. It's even worse than the early '90s.
June 6, 2021 at 1:32 PM