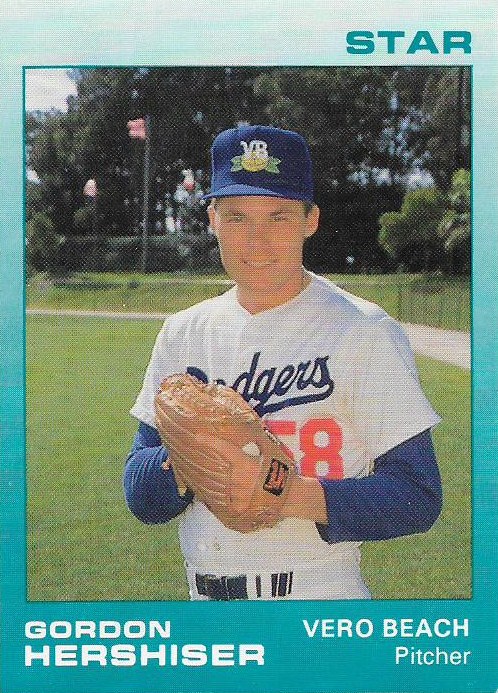 I received this card, and several others from the 1988 Star Vero Beach Dodgers set, in the latest envelope from reader and trader Dave S.
I've known about this card for quite awhile and have always received conflicting information about it. Gordon Hershiser, the various stories went, was either related or not related to the much more well-known Orel Hershiser.
I didn't bother to look into it more, it's not like Gordie made the majors. So I assumed that it was just one of those coincidences that you come across in baseball every once in awhile.
Turns out my assumption was wrong. Gordon Hershiser is actually the younger brother of Orel Hershiser. He was drafted three years after his brother and made it as far as Double A in 1990. But the back of Gordie's card doesn't even bother to fill me in on that notable connection.
So, anyway, he's not one of the ballplayers with the distinctive name who is not related to another player with the same distinctive name.
For example, like this: 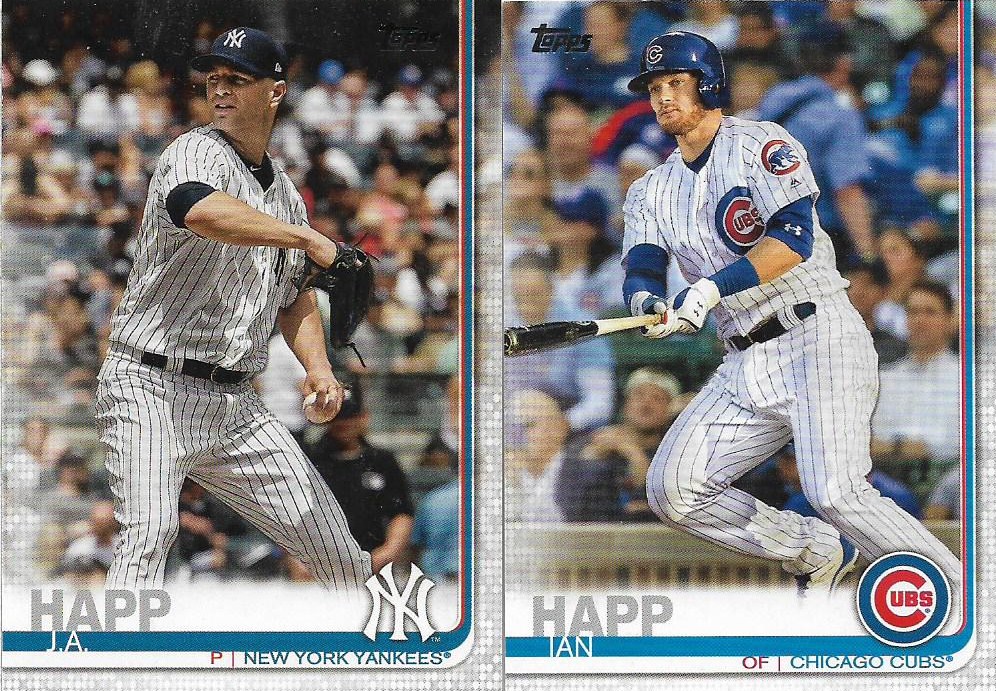 J.A. Happ and Ian Happ are not related -- at least not according to any publicly known information. J.A. is from Illinois. Ian is from Pennsylvania. They are the only "Happs" to play in major league baseball in the history of the league, and they came along at basically the same time.
That is so bizarre to me. But it's happened quite a bit. So much that it can't be a coincidence right? They must be related distantly somehow? 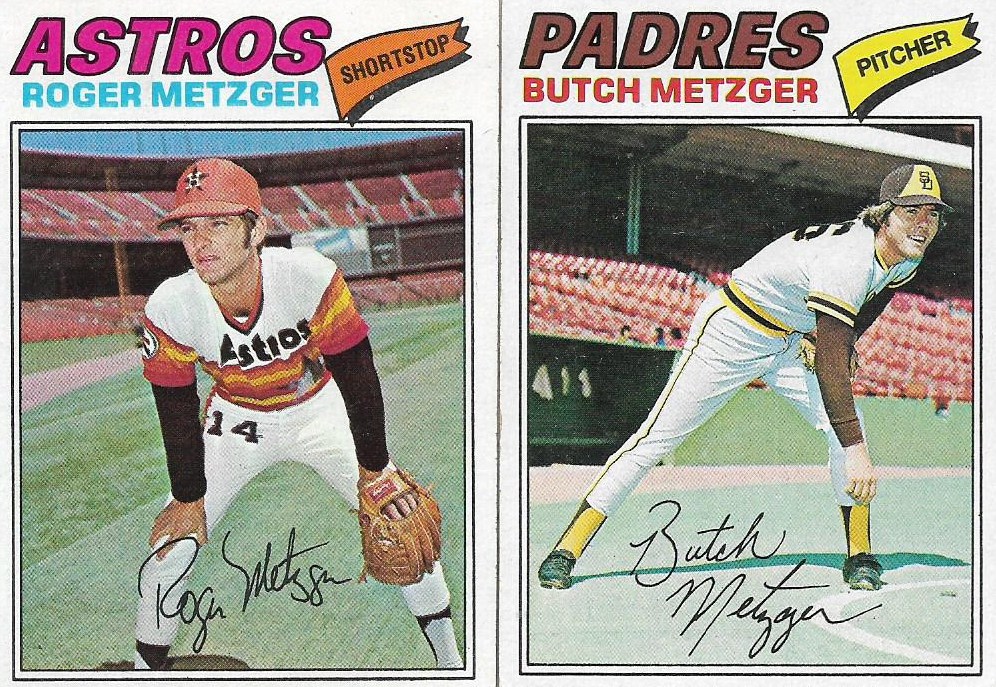 The first time I became aware of this phenomenon was in 1976. I had known about Astros shortstop Roger Metzger ever since I pulled his card out of pack of 1975 Topps. Then, a year later, someone named Butch Metzger starts making noise in the newspapers. He ends up sharing the Rookie of the Year award with the Mets' Pat Zachry. Roger and Butch must be related, right? Showing up so soon after each other?
Nope. Roger hails from Texas, Butch from California. Not that that means anything but there's nothing out there saying they are blood relatives. But for crying out loud, Roger played from 1970 to 1980 and Butch played from 1974 to 1978 and they are the only two MLB players ever named Metzger!!! 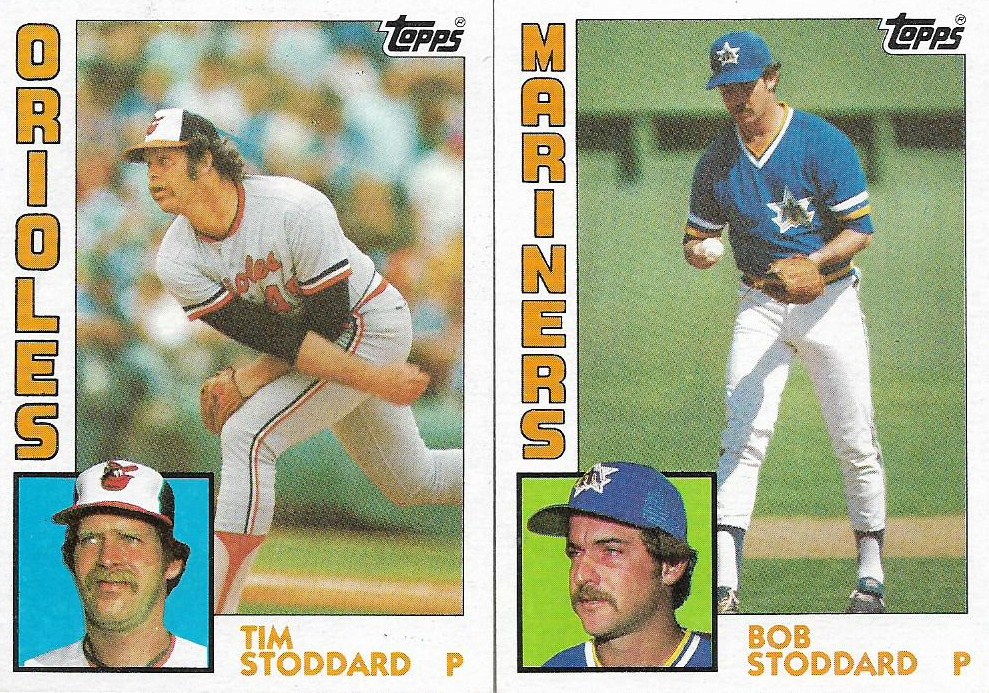 In 1981, a pitcher named Bob Stoddard arrived in the majors with the Seattle Mariners. I'm pretty sure I did a double-take right there in the bedroom reading my Sporting News. Did Tim Stoddard get traded to the Mariners?
I had known about Tim Stoddard since the late 1970s. He was a prominent player in the 1979 postseason. The guy was 6-7. You couldn't miss him. But this Bob Stoddard guy was just 6-1, and it turns out he's not related to Tim, again at least not according to any of the main baseball sites.
Oh, by the way, all of the Stoddards to play major league baseball appeared in the big leagues between 1975 and 1989, and they were named Tim and Bob. That's it! (OK, according to baseball-reference there was a guy just named "Stoddard," no first name, who played in 1875). 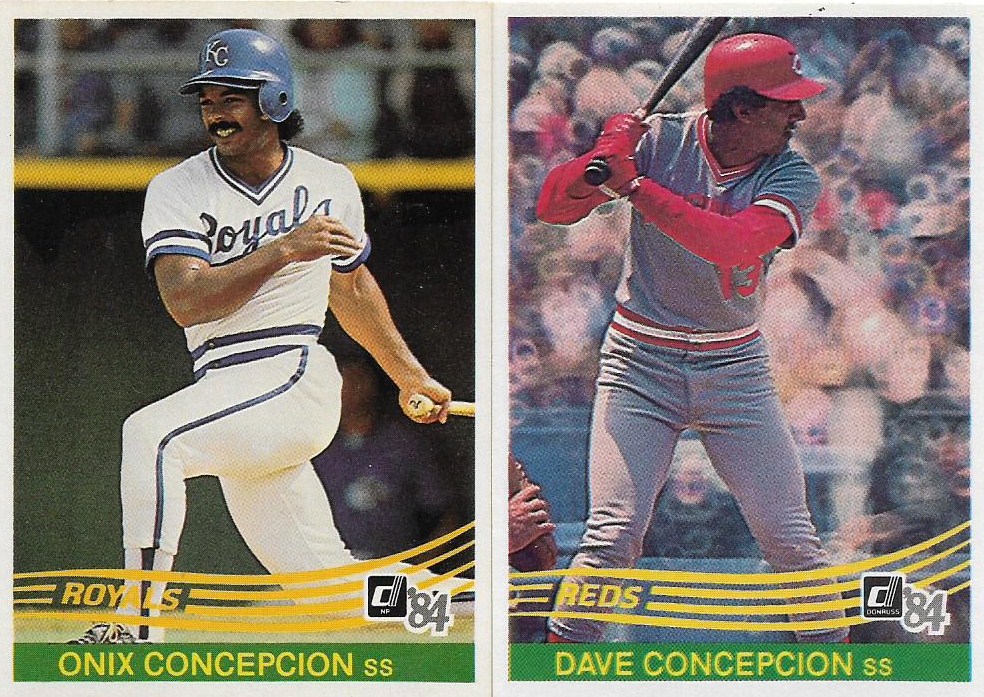 This one stunned me in 1984. I pulled the Onix Concepcion card out of one of the few packs of 1984 Donruss I bought that year (note that the top edge has yellowed). I had been following Davey Concepcion with the Reds ever since 1975 and it was the only time I had ever seen the Concepcion name. Now there was this guy named Onix, also a shortstop, who was not related to Davey! (But he is a cousin of Jose Lind).
Granted, Spanish surnames are different than English ones, so maybe there is a connection there somewhere, I'm just not up on that, but it kind of blew my mind in '84. 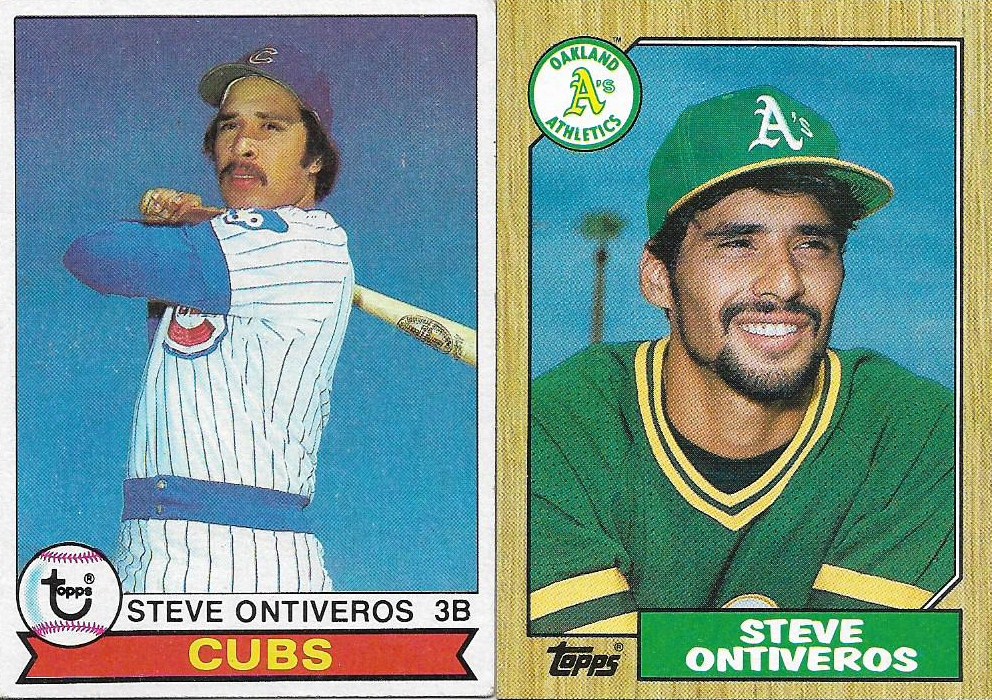 The one that everyone cites. For obvious reasons.
I was watching baseball peacefully for the first 10 years or so, fully confident for most of those years that Steve Ontiveros was an infielder for the Giants and the Cubs until 1980, then went to Japan to play for five years and then ... I open a pack of 1986 Topps and what's this? Steve Ontiveros is BACK????
You can't blame me for thinking he had unretired and become a pitcher.
Obviously it was a different Steve Ontiveros -- unrelated to the original Steve Ontiveros. No matter the similarities. 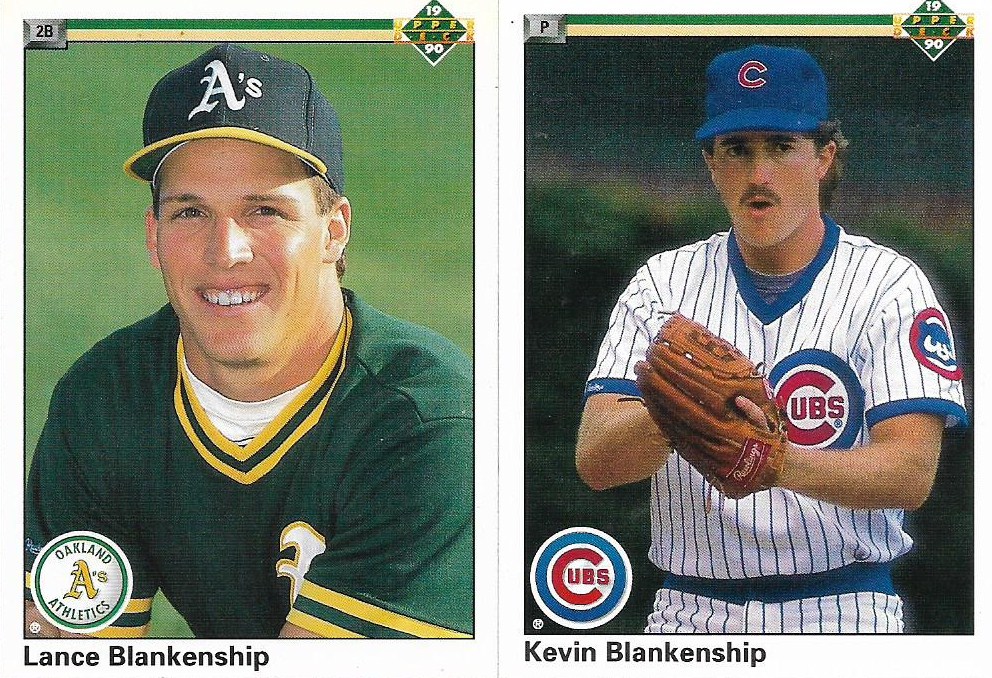 I mean stuff like this is just borderline freaky. Lance Blankenship I knew as a backup infielder for the A's during the late 1980s. Until he showed up, he was the only person I knew with the last name of Blankenship (this was long before "Mad Men").
But then in the very same Upper Deck set there is another player named Blankenship! No, they're not related! Just happen to have the same last name! The first time that last name has showed up in Major League Baseball in 70 years but, yeah, sure nothing weird about two guys named Blankenship both debuting in 1988 and claiming they aren't family. 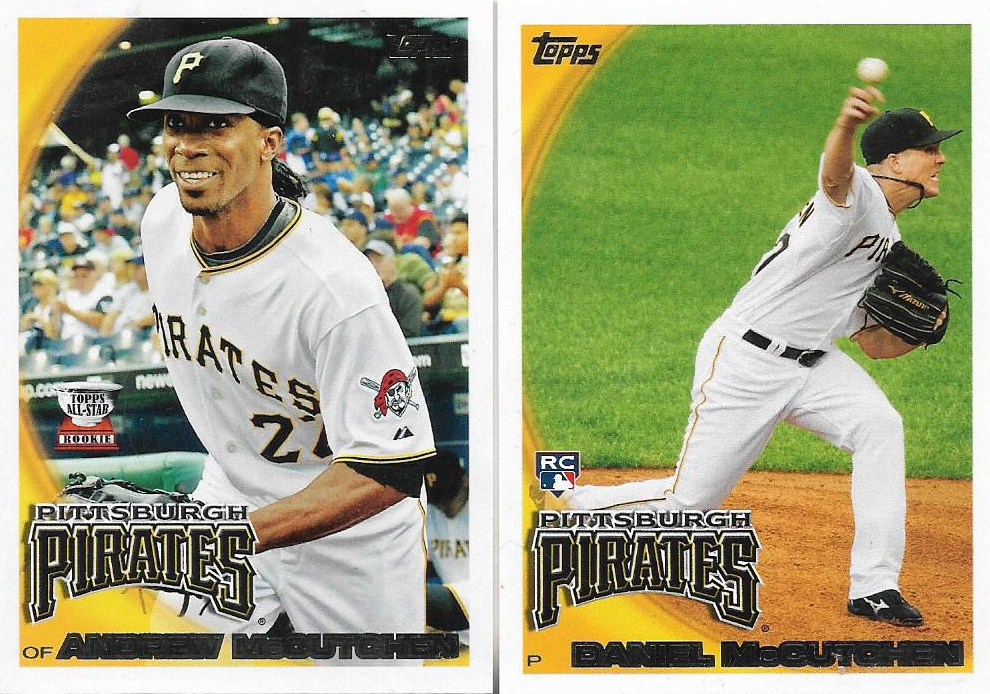 And what about this? In the same set, on the same team, there are two guys named "McCutchen." I remember when everyone had to correct people who didn't realize that Andrew McCutchen didn't spell his name "McCutcheon" because when had you ever heard of someone spelling it "McCutchen"? Well, Daniel McCutchen had heard of spelling it "McCutchen," that's who! And he's his teammate for goodness sake!
How? How does this happen?
There are other examples. 1950s shortstop Don Blasingame and and early '70s pitcher Wade Blasingame. Not related. Jarret and Micah Hoffpauir (OK, they're distant cousins). Clay and Taylor Buchholtz (wow, they're distant cousins, too).
They're are several other examples, but I need to calm myself down after that, so here are some more late '80s Vero Beach prospects: 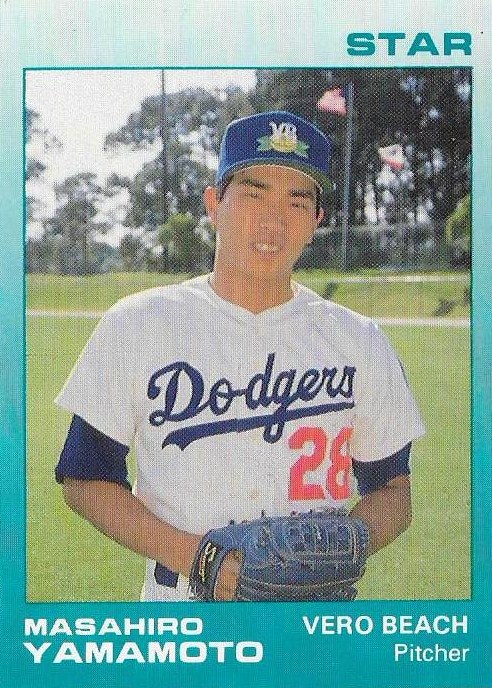 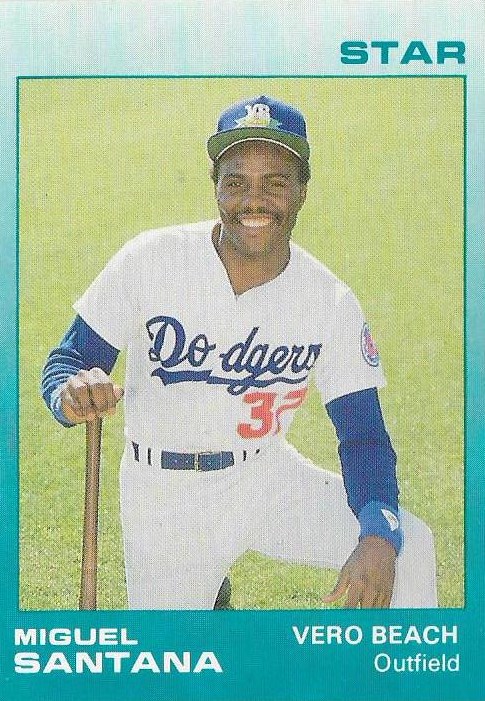 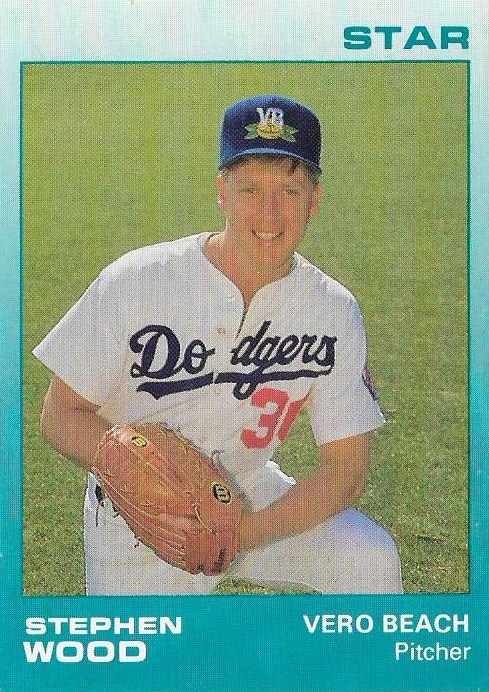 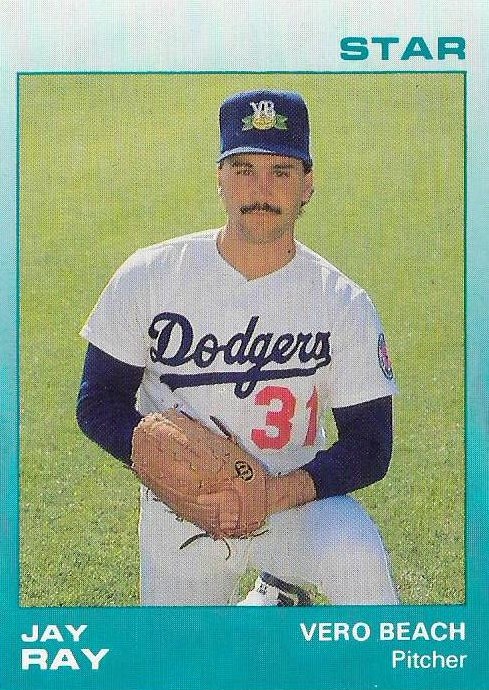 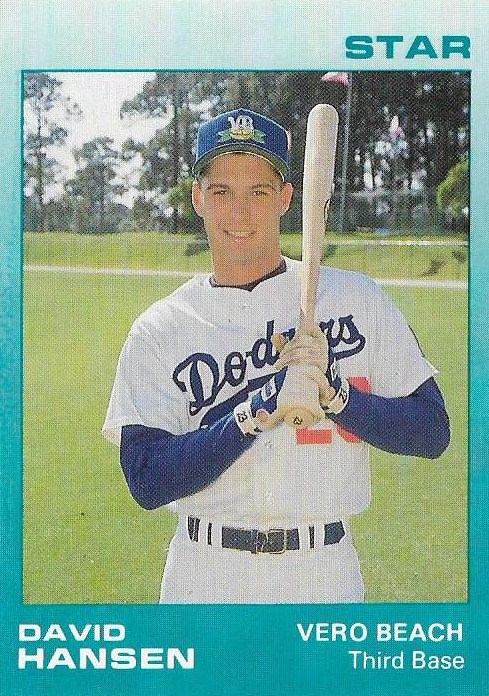 Jay Ray is like a Toronto-Tampa Bay series in Florida all in one name.
None of these guys other than David Hansen reached the majors.
And, no, Dave Hansen is not related to Ron Hansen or Craig Hansen. At least not the ones who played in the majors.
At least I don't think he is.

I think I remember seeing on the back of one of his cards that Orel Hershiser had a brother pitching in the Dodgers system.
June 17, 2021 at 7:35 PM

Peter K Steinberg said…
I'm almost cross-eyed from this post. But it's a very good one. Thanks for writing it. If you collect references to "night owl" in literature, the words appear in Shakespeare's "Twelfth Night."
June 17, 2021 at 8:15 PM

Billy Kingsley said…
I love stuff like this. You want a weird one, there's one in hockey right now. Sebastian Aho is one of the stars on the Carolina Hurricanes. There's another Sebastian Aho in the Islanders system, who is mostly a minor league guy but has played for the big club a few times. The two of them are the only Ahos to play in the entire 104 year history of the league, and they are not related.
June 17, 2021 at 8:25 PM

Fuji said…
I've been wondering if the Happs were brothers or cousins or something. And Daniel and Andrew are the only two McCutchens I've ever heard of.

Johnnys Trading Spot said…
I broke apart my "Same Name" binder for athletes/celebs. Literally hundreds with the same first and last name (spelling could be different). I couldn't keep that one up. Every time I turned around I found my self writing names on sticky notes, only to misplace them. I have a stack of customs sitting next to me right now that I had Gavin do for the ones I couldn't buy cards for. I don't know what to do with those now.
June 17, 2021 at 11:50 PM

NPB Card Guy said…
Um, Masahiro Yamamoto DID reach the majors, just not the one in North America. He was on loan to the Dodgers organization that year from the Chunichi Dragons in Japan and had a really good season for Vero Beach before returning to Japan, going 5-0 for the Dragons that September and helping them win the Central League pennant. He also started Game 3 of the Japan Series that fall so 1988 was a pretty full year for him. He played until 2015 when he was 50 years old! That Vero Beach card predates his earliest Japanese card.

Mortimer Brewster said…
Please excuse the Hockey reference. in the early 1970's the Buffalo Sabres had a Defenseman named Tracy Pratt. At the same Buffalo radio station WGR had a radio announcer named Tracy Pratt (female) as a 12 year old this really confused me.

At the same time Sabres had a goalie Roger Crozier, no relation to head coach Joe Crozier.

Not quite the same thing, but arguably the two most valuable players on the 1996 Yankees world championship team were the only two Marianos to play major league baseball (Rivera and Duncan).
June 18, 2021 at 12:19 PM

Mortimer Brewster said…
not quite the same thing again, the only 3 players in major league history with the first name Aurelio died in car accidents at relatively young ages. (Lopez,Rodriguez,Monteagudo).
June 18, 2021 at 12:31 PM

Anonymous said…
I assumed the Morelands (Mitch, Keith) were related until I looked it up a few days ago. And, according to baseball-reference, Mitch's nickname is "Mitchy Two Bags" which is pretty cool. I guess.
June 18, 2021 at 12:40 PM

Brett Alan said…
Not at the same time, but it always seemed strange to me that Nick Hundley was a catcher, but wasn't related to Randy Hundley and his son Todd, who had both been notable major league catchers.
June 18, 2021 at 1:06 PM

night owl said…
All fun examples in the comments and some I've referenced before in other posts. This post was more about players with fairly uncommon last names (not Smith or Roberts, for example) who show up in the majors at basically the same time and are not related to the other guy with the uncommon last name.

Here's another spooky one: One year after Mets manager Gil Hodges dies, the Mets call up a catcher named Ron Hodges. Up until that time, the only "Hodges" in MLB were a couple of wartime players who lasted only one year. And Gil and Ron weren't related!
June 18, 2021 at 3:12 PM

bryan was here said…
An addendum to Billy Kingsley's comment about the two Sebastian Aho's: The one who plays for Carolina is Finnish, while the one on the Islanders is Swedish.
June 18, 2021 at 7:24 PM

Brett Alan said…
Good one on Gil and Ron Hodges.