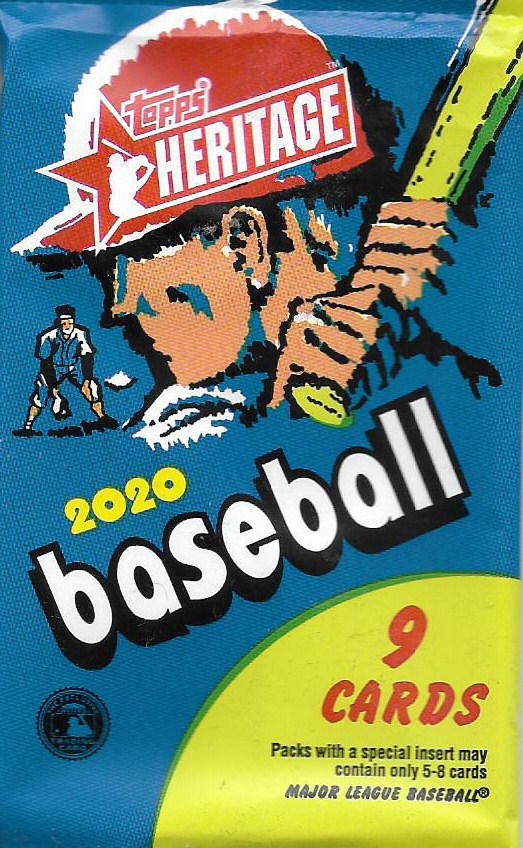 One of the bothersome things about Topps Heritage that I never mention is the choice Topps made when they started the brand.
When Heritage debuted in 2001, Topps chose to start with the 1952 design. It ignored the '51 game cards that actually kicked off the Topps brand and that decision has led to confusion every year since.
Look back at your Heritage cards. What year did the 1968 design cards come out? 2018? No! They came out in 2017! Remember when the 1956-designed cards were issued? It was 2005, but, man does my brain have a difficult time not thinking they came out in 2006. If only that last digit lined up! Things would be so much easier.
Topps could actually say, "in honor of the 50th anniversary of Topps' 1969 set we bring you 2019 Heritage with the '69 design."
But they can't. And I can't say it either.
All Topps had to do was start with the '51 design ... or begin Heritage in 2002 with the 1952 design. Years of my addled brain becoming more addled could have been avoided.
So, last year, in 2020 (yup, that was really last year), Heritage came out with, not the 1970 design, but the 1971 design. I found myself collecting it, mostly because people knew I liked the '71 design so much and sent a bunch of cards.
Finally, a week or so ago, I received the last two cards I needed to complete the non-SP portion of the set. 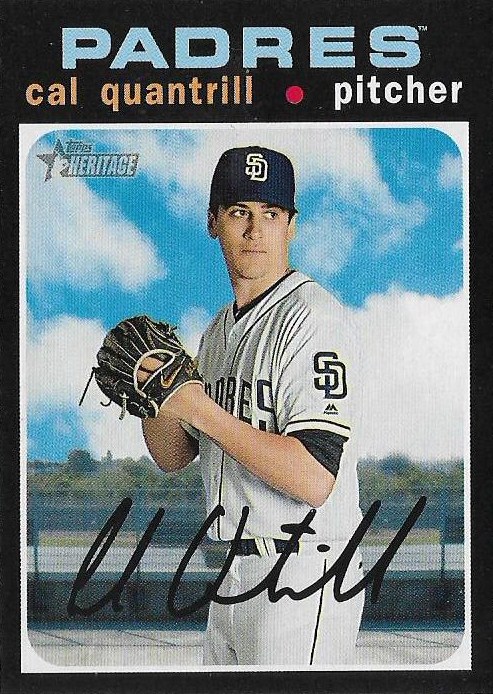 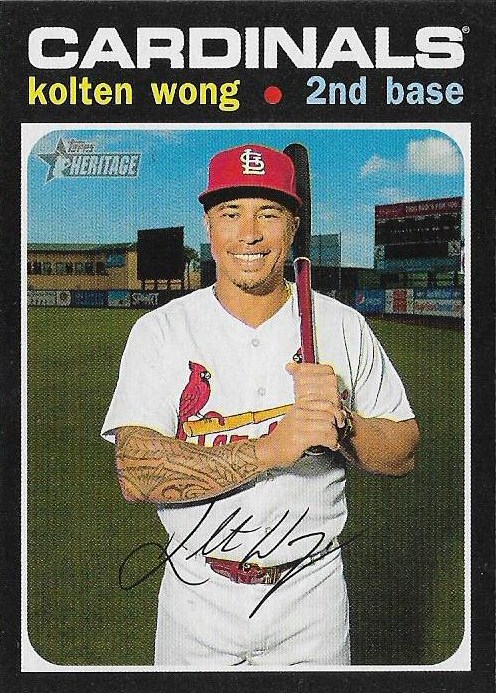 These showed up from Jeffrey of Cardboard Catastophes. He was quite excited that he could knock off a couple of my Nebulous 9 wants. He called it a "hobby thrill," that's quite nice of him!
These were very well-timed because they showed up not in 2020 but in 2021. And now I can say that on the 50th anniversary of the 1971 Topps set, I have completed the Heritage set that used that design!
(OK, so it's still called 2020 Heritage).
Of course, nothing is easy when it comes to modern sets and set completion. There are still way too many short-print cards that I need. That's what happens when there are ONE HUNDRED SPS!!!!
But Jeff helped me out there, too, with a handful: 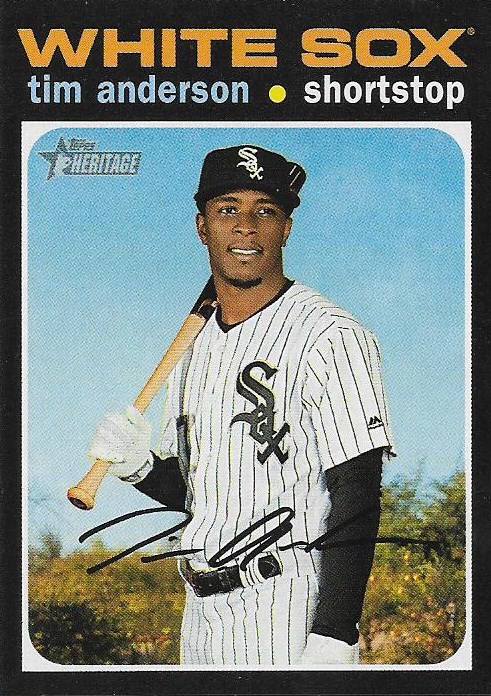 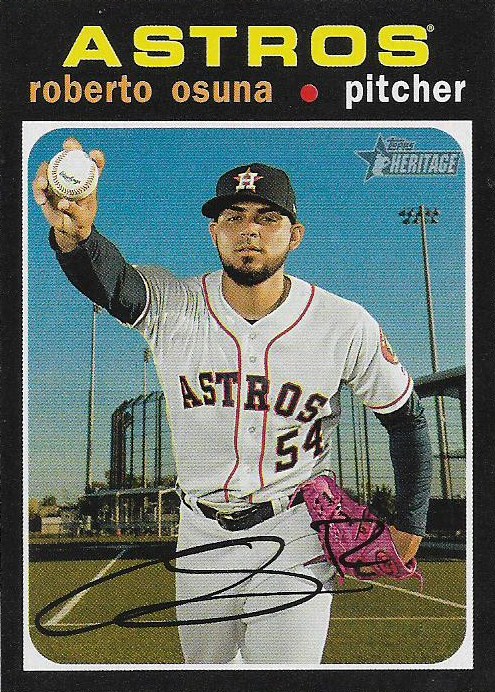 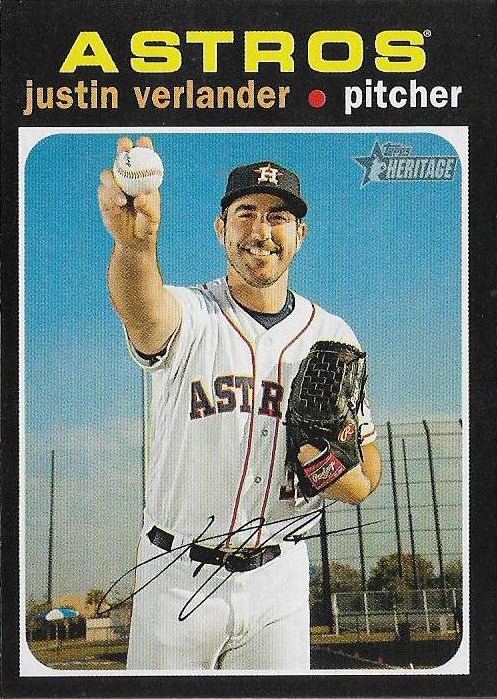 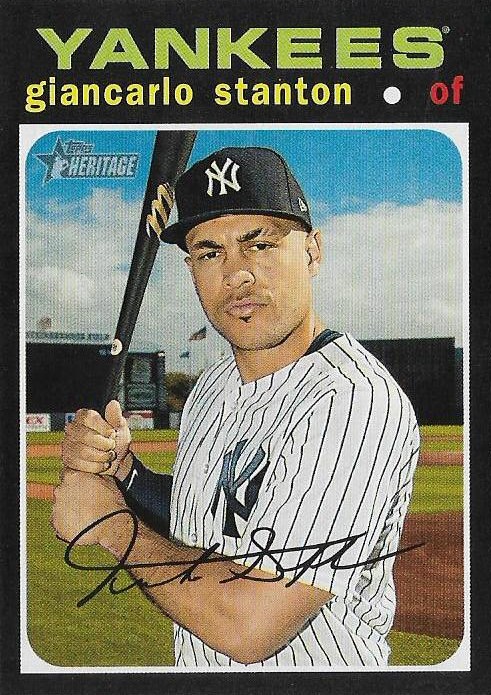 As usual, a suspicious number of well-known names in the SP portion of the checklist.
But I'm still pretty happy that I can say I've completed at least something in a set that pays tribute to one of my all-time favorite sets.
I've even dedicated a binder to this set: 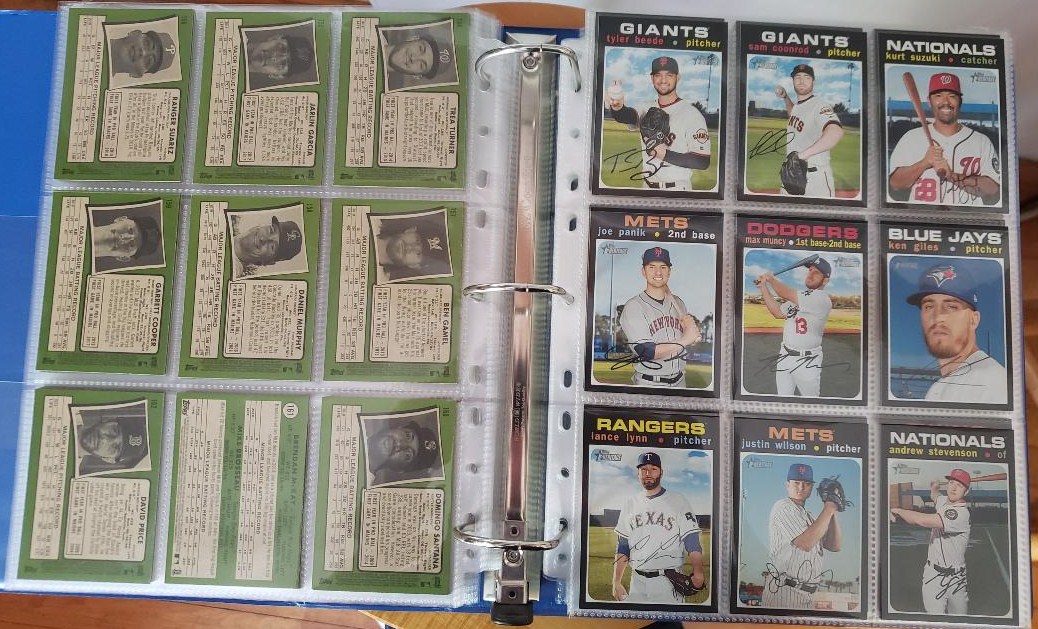 Note that the pages aren't double-bagged, although the second I need some pages, guess which binder I'm raiding.
Heritage liked to think it is true to form to the set that it is honoring but there are lots of differences, probably more differences than there was when the brand first started. And now that we're getting to the '70s, I'm noticing things a lot more. For instance, those two Giants at the top of the page. Players from the same team very rarely appeared next to each other when ordering the set by card number back in the '70s.
This is the first modern set that I have housed in a binder since 2015 Topps flagship and 2015 Stadium Club. It doesn't happen very often anymore.
I don't think that this achievement will get me to rededicate myself and start picking up all those SPs. It'll probably be one of those things where my want list will stagnate for 10 years. It'll probably be even longer because the Heritage '75 tribute is showing up in three years (although it should be four) and I likely will be occupied with those cards for awhile.
But I like the idea of doing 1971 things exactly 50 years later.
That's why I was happy to wake up to a comment on my 1971 Topps blog today. Somebody left a comment on my post about Bob Reed, a forgotten pitcher for the Detroit Tigers. 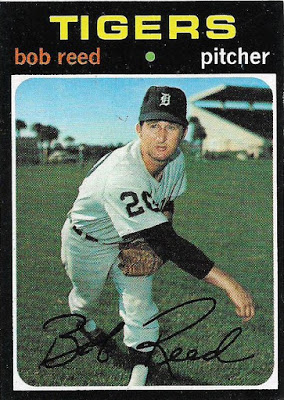 Reed pitched just 24 games between 1969 and 1970 before his major league career ended. It was so brief that even dedicated card collectors from the time didn't recall him, as the comments on the post about Reed showed. 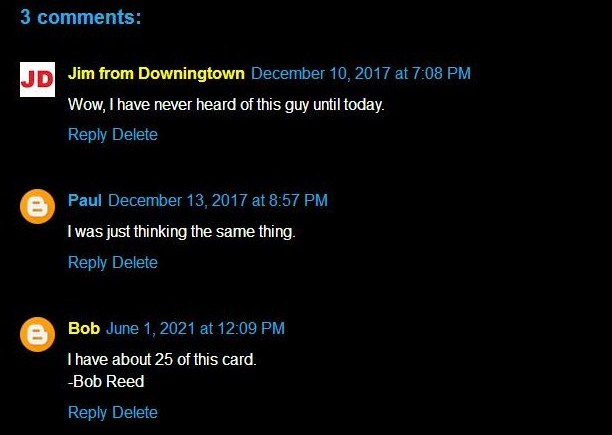 The super-collector for Bob Reed's card is Bob Reed!
I don't know if that's THE Bob Reed or just a Bob Reed (I know it's not Robert Reed). But 25 cards is impressive considering this card is also a super-high number.
Stuff like that's fun and even more so when it happens on a 50th anniversary.
There's nothing Topps can do to get Heritage to line up the years better with my brain (well, it could skip the 1987 design in 2036 but I don't suppose that's going to happen). But maybe I 'll pull out another dedication to the '71 set before 2021 is done.

Brett Alan said…
Topps actually DOES claim that the Heritage sets are for the 50th anniversary--at least on the stamps for the buyback cards they sometimes use as box toppers. Corporations lie!

I actually bought that Justin Wilson, among other cards from this set, in a dime box this weekend, mostly because he was a Met I couldn't really remember even though he was on the team last season and the season before that. I'm old.

Apologies if I've mentioned this before, but what really bugs me about the lack of a '51-design Heritage set is that it will mess up the MVP cards in three years. The originals of course say "25 Years of Topps Baseball Cards". But they can't say "25 Years of Topps Heritage Baseball Cards", unless they will just lie again, which, well, see above. But there won't be a card for the '51 design, I'm guessing. Mostly I'm just hoping they don't let this stop them from doing those cards entirely, which they might. And there should be variations which use the Topps flagship cards from that year instead of Heritage.
June 1, 2021 at 6:20 PM

Nick said…
I go back and forth on whether I consider '51 Topps a "true" Topps set, but I do think it should've gotten the Heritage treatment to kick things off way back in 2001(!). One of the things I wonder is if/when Topps is ever going to stop the Heritage brand - will we still have Heritage when we get up to, say, 1986 Topps? Guess that won't come up for a while, but it's interesting to think about.
June 1, 2021 at 9:04 PM

Brett Alan said…
Nick, I think the answer to your question is clear: they'll stop when it doesn't sell anymore. (Or, perhaps, when they lose the MLB license, but I don't see that happening any time soon.) The junk wax era designs are well-known and popular, as seen with their frequent use as inserts, in Archives, and so on. I think Topps will happily keep Heritage going with those designs.
June 2, 2021 at 12:37 PM

GCA said…
...or they'll stop it when all card issues degenerate into rookie prospects only and all us old guys who still build sets will have nothing left to buy.
June 2, 2021 at 4:26 PM