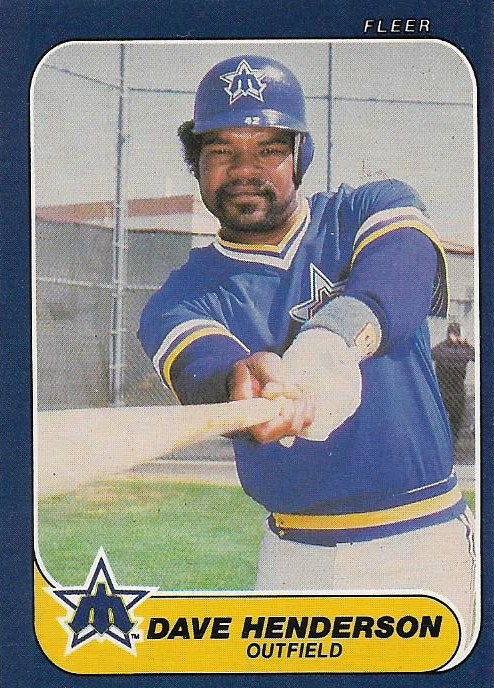 I am getting a little closer to completed the 1983 and 1985 Fleer sets. I just need to request shipment on some cards and '83 will be down to next to nothing. Then I can focus more on '85.
This is key because I'm looking to add some more '80s Fleer want lists but wanted to wait until those others were almost done. It feels too scattered if I'm chasing too many '80s sets at once.
The next Fleer set to get a want list is from 1986 (yeah, sorry, 1987, I like you, but you're last). I have mentioned many times how this is one of the most forgotten sets of my collecting history. Since I barely collected in the mid-1980s, '86 Fleer dropped into a black hole of non-existence. When it finally emerged and into my consciousness, I thought it was '85 Fleer. And that little game of confusion continued for the next few decades.
Fortunately, Johnny's Trading Spot dumped a bunch of '86 Fleer on me three years ago and I now can distinguish clearly between '85 and '86 Fleer (but both are still one of the few '80s sets for which I've never opened a pack).
Recently, I added a handful of '86 Fleer wants off from the online dime box shop -- it's just the best site for finding cards for sets like this. 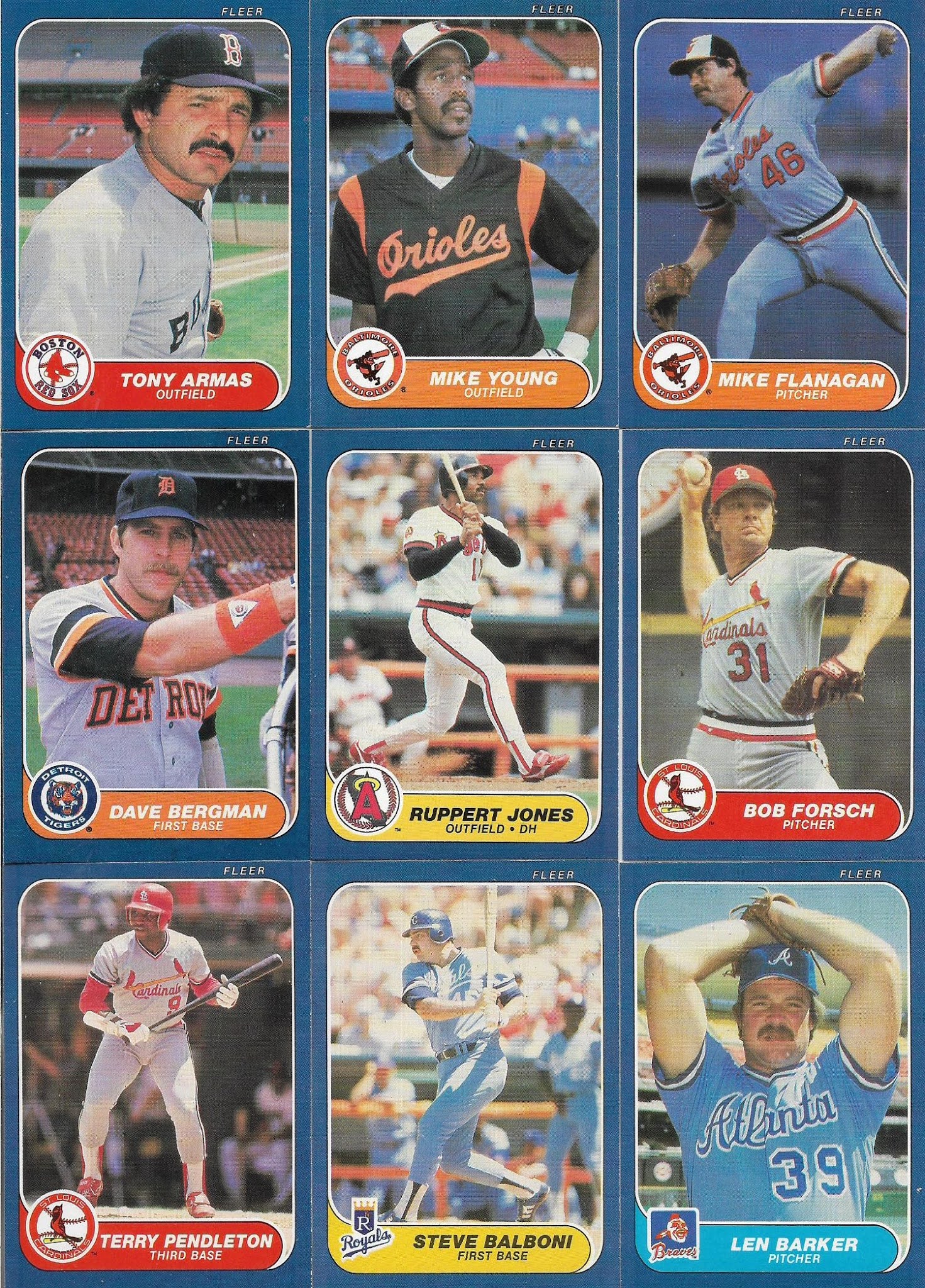 These cards may be plenty familiar to you, but not to me. Oh, the players are, for sure. I watched plenty of games in '85 and '86. But the individual cardboard is completely new. And it's a hoot seeing guys I know on cards I've never seen. This is getting familiar in the best way.
Although I don't know the cards that well, I'm getting better at identifying them and going through them lately to build my want lists made me realize that '86 Fleer -- celebrating its 35th anniversary this year -- is as wonderfully Fleer as those other '80s Fleer sets. 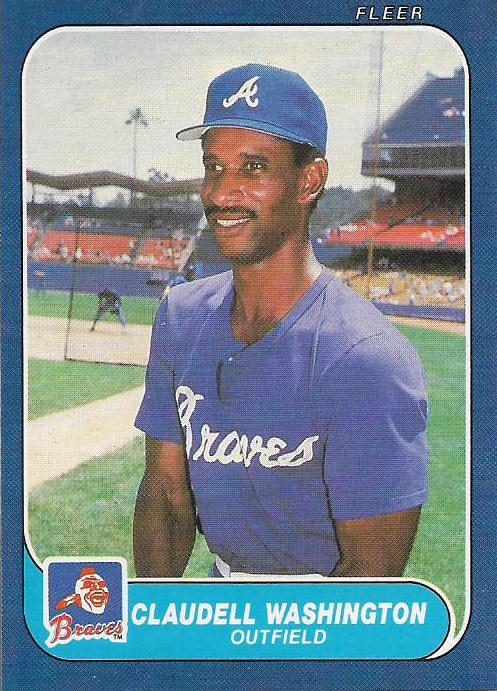 Many Fleer cards look like the photographer snapped the players without any indication that he told the player he was about to take their picture. No set up, no "smile," they just pointed and clicked and this is what you got. 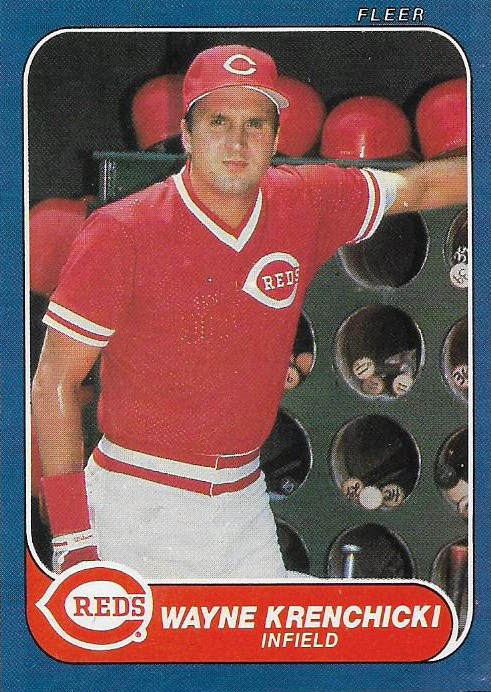 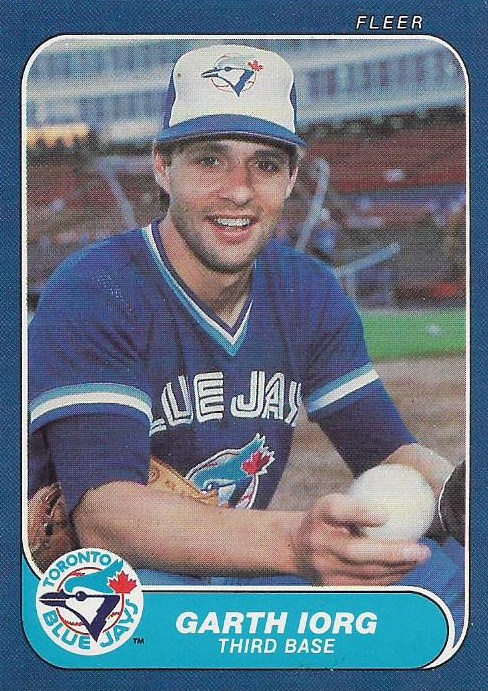 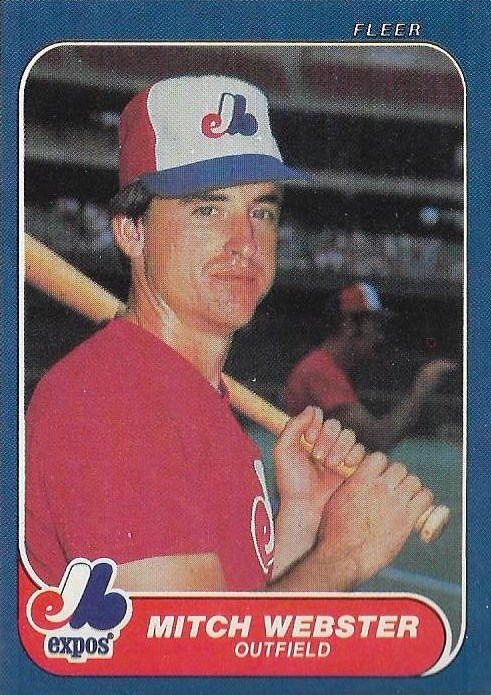 Someone being lectured behind Mitch Webster. 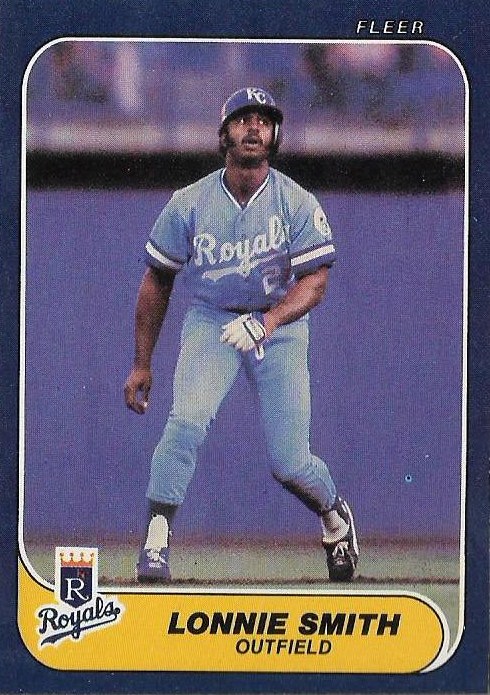 Lonnie has seen some things ... on the base paths. 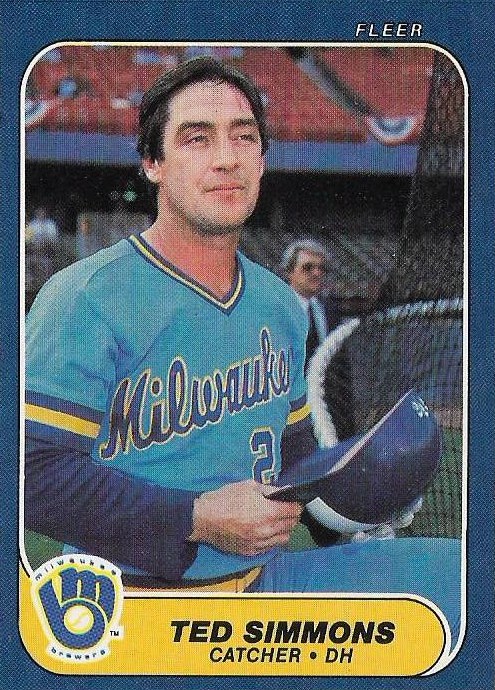 The man in the sunglasses wants everyone to take off their hats. 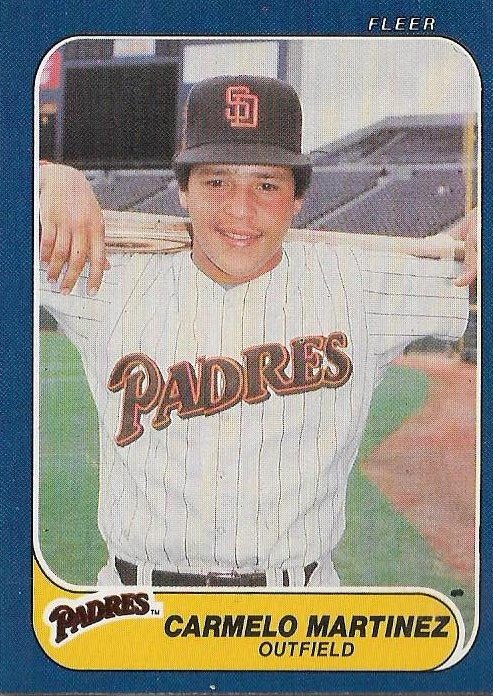 Before Bo Jackson perfected his pose, there were several prototypes. 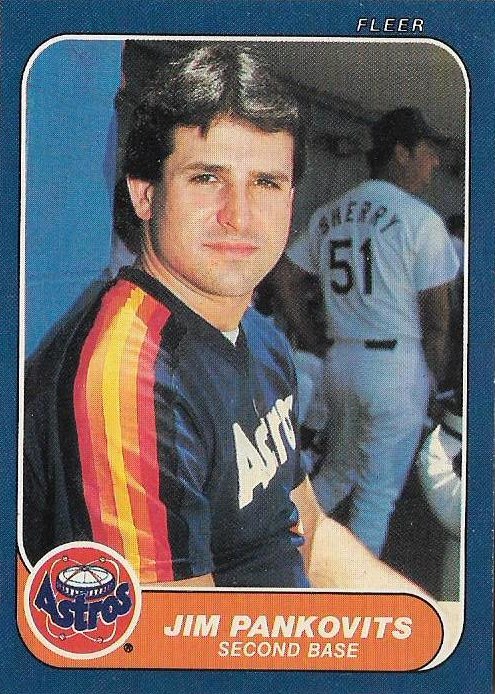 I take an interest in Jim Pankovits cards because he is one of the major league players I've interviewed. But then I looked in the background and that's Dodgers pitching great Larry Sherry!
I have so many questions. Sherry was a minor league pitching instructor for the Dodgers in the '80s and that's the number he wore as a player for L.A. But is this a Dodgers card now? I can't think of any other card showing Sherry as a Dodgers coach. 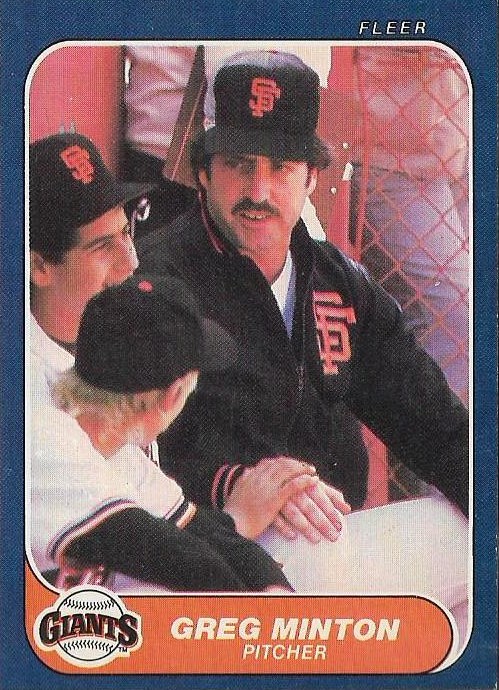 Greg Minton does NOT want you touching his hand. 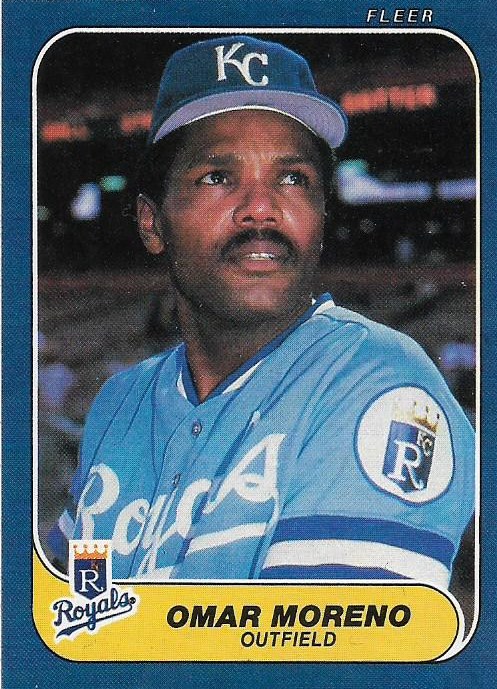 Getting familiar with unfamiliar sets means familiarizing yourself with strange sights like Omar Moreno wearing a Royals uniform. I believe this is his only card example donning KC royal blue. 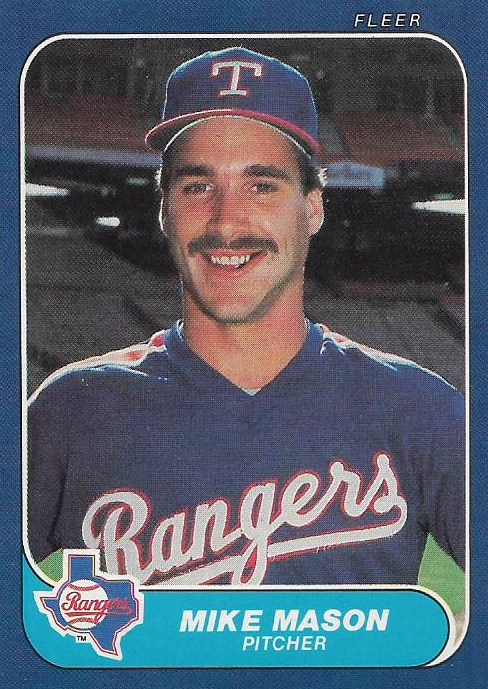 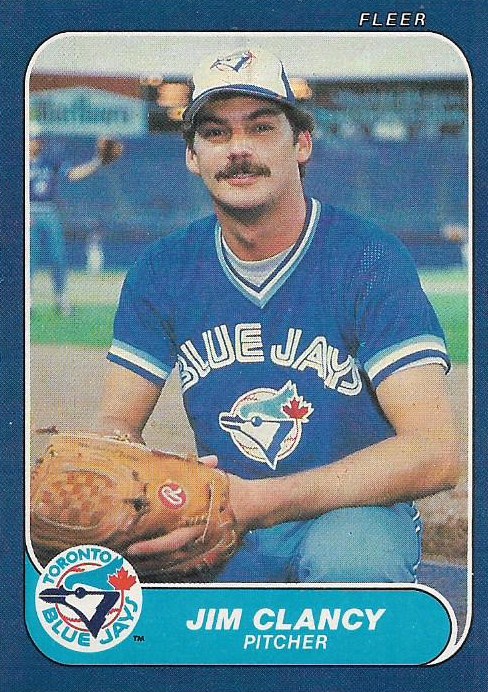 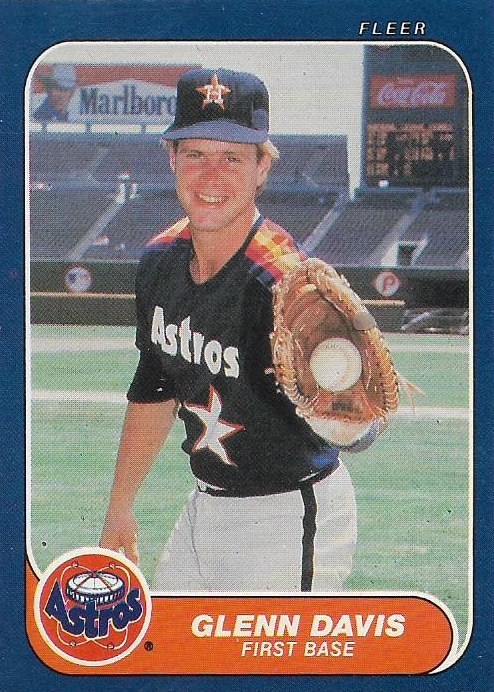 Every time I see the Marlboro sign in the background of other 1980s Fleer cards I wonder what all the scribbling was about on Randy Johnson's 1989 Fleer card.
So, obviously I'm having fun getting acquainted with '86 Fleer.
The set wants are up, although I still need to subtract the Dodgers as I'm sure I have dupes for all of them.
Welcome to the set-building rat race, 1986 Fleer. I guess I need to find another binder.

Jeff B - Wax Pack Wonders said…
Maybe Pankovits was pioneering Astro sign stealing? I like his 89 Upper Deck where he has an incredulous look on his face.

I feel like that Glenn Davis doesn't look anything like himself in that picture, if that's possible.
June 24, 2021 at 7:17 PM

Fuji said…
A. I'm curious about what's going on in that Minton photo.

B. This post made me wonder if I own this set or not. I just always assumed that I picked one up cheap at the flea market or a card show, but I just checked my collection and discovered that I don't. It's a shame, because I love the design. I probably won't attempt to build it though, but hopefully I find a complete set one day... because this set would look awesome displayed in a binder.
June 25, 2021 at 12:27 PM

Nick said…
That Jim Pankovits card has always confused me as well. Did he just wander into the wrong dugout for some reason, or what?
June 25, 2021 at 2:17 PM

Doc Samson said…
Thank you, Mr. Owl. Your fantastic post brought back a flood of memories. I was quite a big Fleer fan in the 80's. To me, there were the big underdog to Topps and Donruss.

If I remember correctly, 1983 Fleer was one of the most grossly overproduced sets of the 80's. There were packs of 1983 Fleer everywhere! Although it must be stated that 1983 brought back the team logo after many years of it being absent on any baseball card set.

From what I gathered, that's why Fleer scaled down production of the 1984 set dramatically. There is even an urban legend that Fleer dumped a ton of 84 Fleer Update sets into the ocean to make it more scarce (not good for the environment!) Thanks again!
June 25, 2021 at 6:38 PM

NPB Card Guy said…
Maybe the photo from the Pankovits card was from a pregame Old Timer Game event with Sherry wearing his old uniform. Pankovits might have been hanging out in the dugout to watch the festivities.
June 25, 2021 at 8:56 PM

Kin said…
Thank you for introducing me to that dime website. Just made my first purchase!

Nick Vossbrink said…
86 Fleer is one of the most forgettable sets for me. It's not bad it just consistently slips my mind as to what it looks like. And unlike most of Topps's 20th-century run it's not a function of it looking like another design.
June 27, 2021 at 12:31 AM