Walking through the morgue 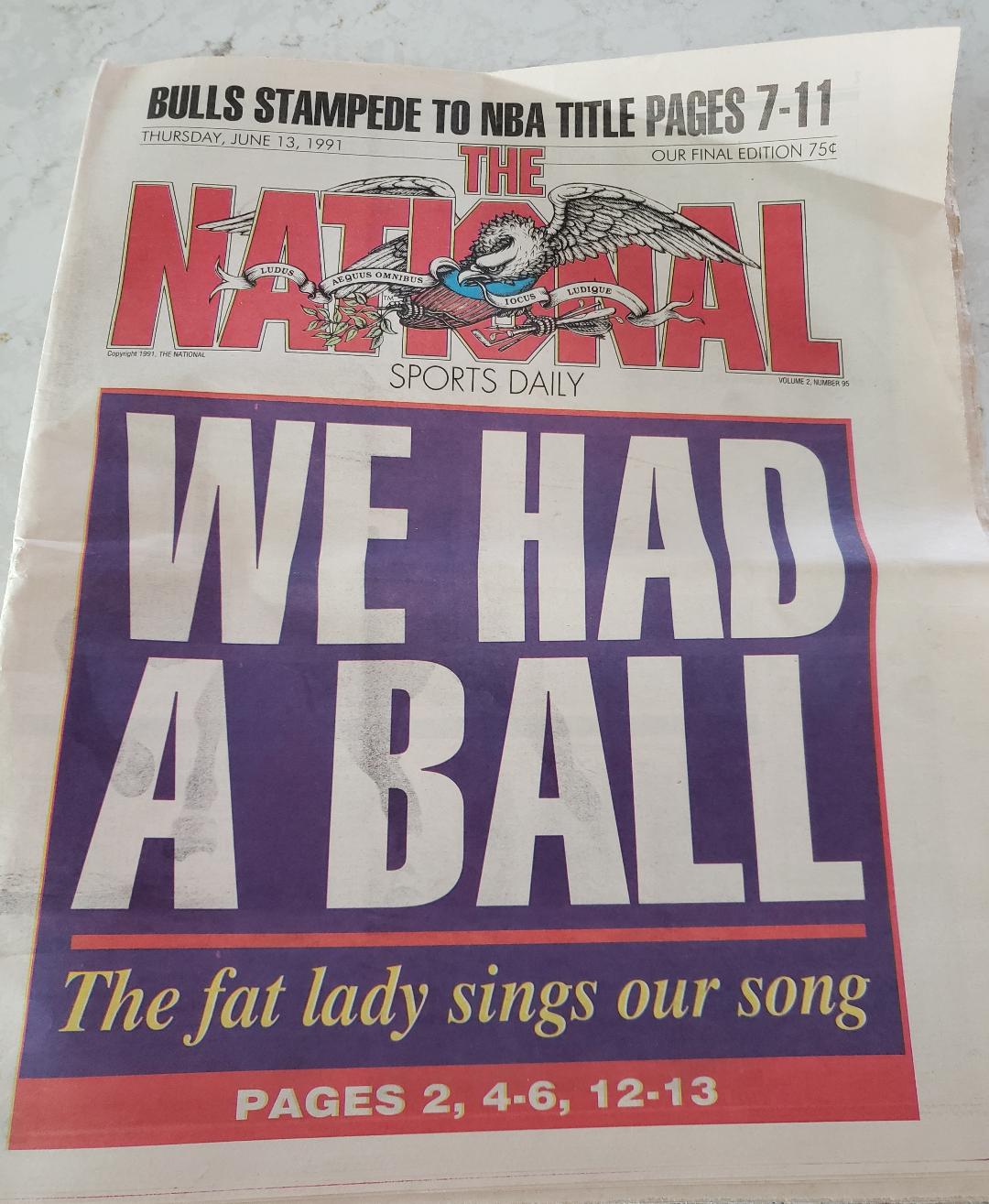 As the resident "ink-stained wretch" of the card blog world, it's my duty to note history as it pertains to newspapers from time to time.
Today, I find myself walking through the newspaper morgue, which is not where they stash the dead bodies of old newspaper men, it is the name for any reference room at a newspaper, where clip files are stored, digital reference computers, reference books, etc.
One thing you might find there, if a newspaper has proper respect for the sports section of its paper (so few do), is a copy of the final edition of The National.
The National died on this exact day 30 years ago. I have the final copy, sent to me by a generous reader a few years ago.
This paper was momentous at the time of its release, for sports fans but especially for sports journalists like myself. I was just starting out in the business at the time of its debut in January 1990 and to see something like this -- a daily publication dedicated to nothing but sports -- was exciting and gave me enthusiasm for the job.
My co-worker, Kerby, and I would walk across the street from our office, as often as we could, to the gas station/convenience store where The National was sold. The tabloid-style newspaper was so complete, covering just about every sport with the most acclaimed sports journalists, that we couldn't possibly read everything in it, especially with our busy jobs in the sports bureau. Often, I would take it home with the hope of reading it there. Then another 50-page one would come out the next day and, man, so much good stuff! 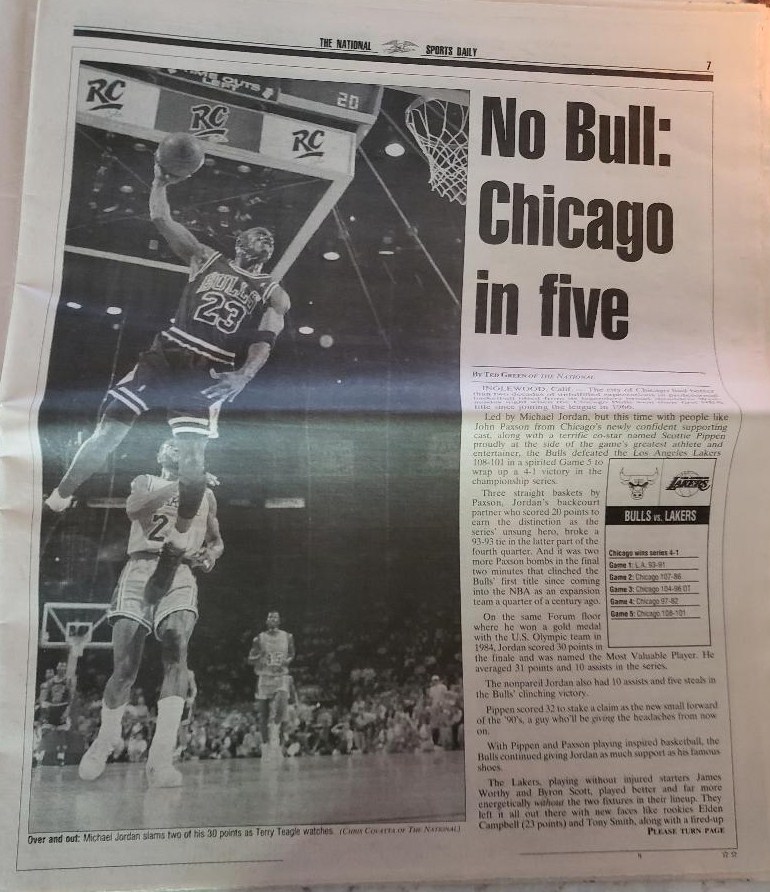 The big story in the final publication (besides that the newspaper was going under) was the Chicago Bulls winning their first NBA title. That's how long ago this was, the Bulls hadn't won a championship yet. 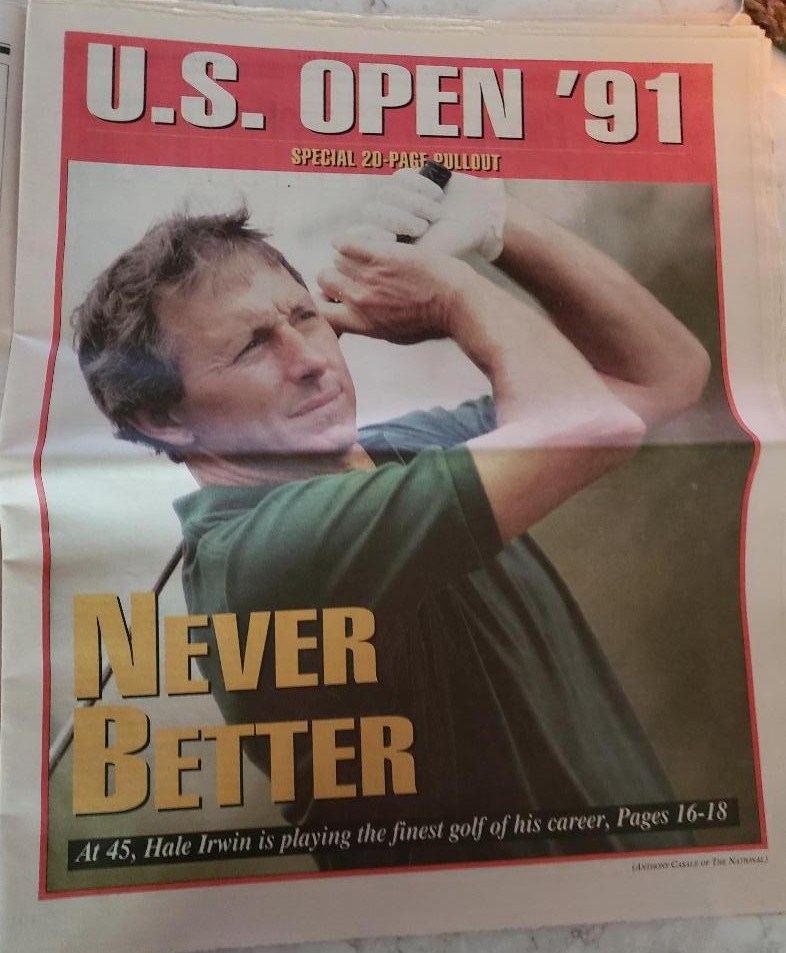 The last edition also featured a 20-page pull-out of the 1991 U.S. Open that was about to kick off at Hazeltine Golf Club in Minnesota. The National covered the hell out of every sports event, super in-depth, written extremely well, reported extremely well, just something we'll never see again. 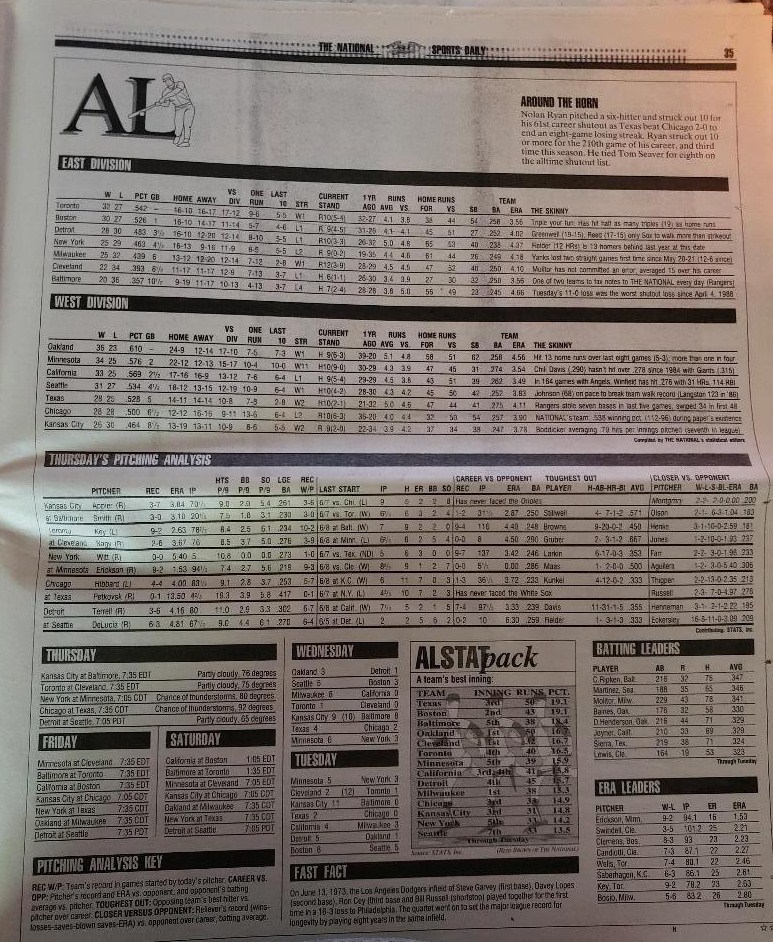 I admit, I was mostly interested in the baseball portion of the publication. Stuff like this was in every edition and just fascinating to read. It reminded me of The Sporting News -- except it came out EVERY DAY. 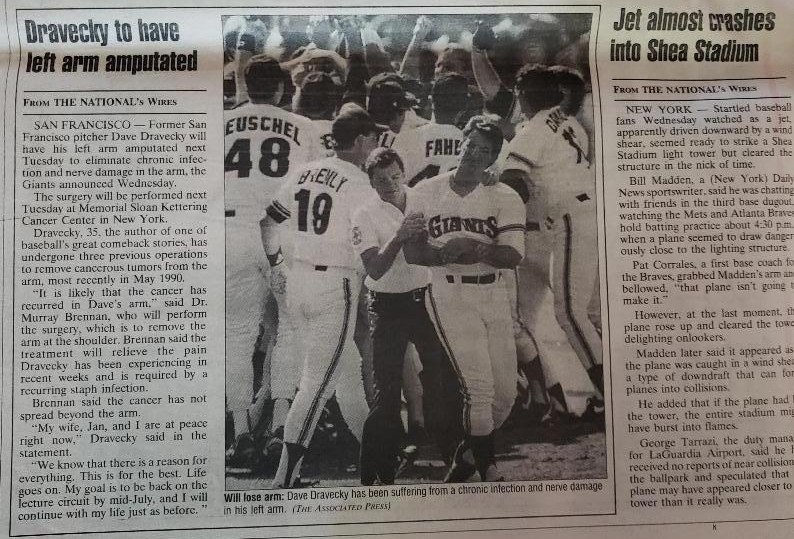 Some of the big news from June 13, 1991 with the famous photo of Dave Dravecky immediately after he broke his arm making a pitch. There is a story above these two in which MLB officially approves Denver and Miami as expansion cities although everyone is bickering about money, of course.
The main story of this publication though is the demise of The National. It was too good to be true, we always knew, even as we read it every day in 1990 and 1991, and this confirmed it.
The final edition is filled with self-congratulatory columns about the venture, which I admit are a bit tough for me to read. As a journalist myself, I wince a bit over people in the media congratulating themselves for what they do for the public. I know I shouldn't be so mortified, and my attitude is the reason why so many people don't understand the importance of a free press -- we failed for so long to promote our profession. But sometimes some journalists can lay on the self-righteousness a little thick (I will note that it's not nearly as thick or pervasive as the back-patting that I see from teachers almost every day on Facebook). 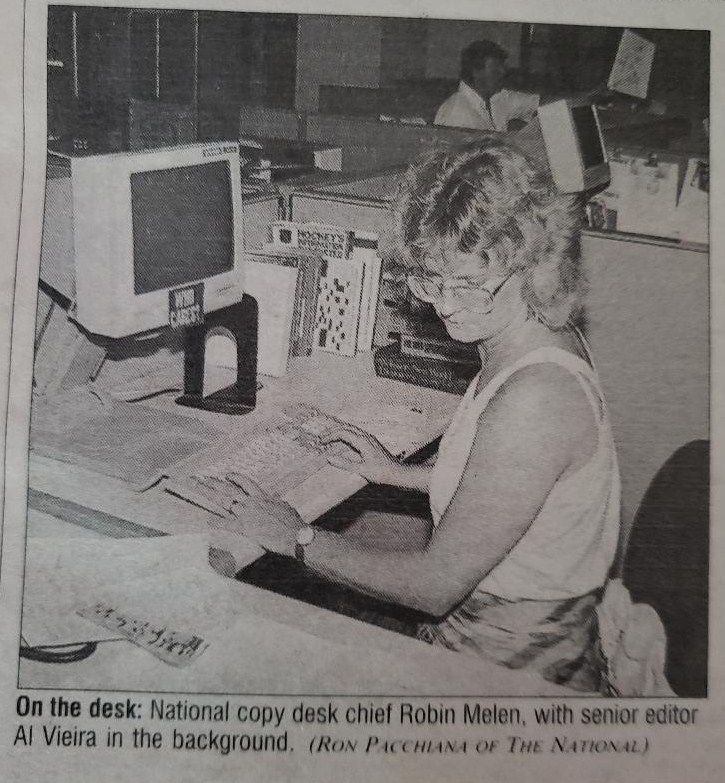 There were several pictures of the "behind the scenes" editors that made up The National at the time. I was surprised to see the name "Al Vieira" mentioned in a caption. I worked with him 25 years after he worked for The National. One of those well-traveled and typically crusty newsmen, Al was much older when I met him and he soon left us, basically got sick of the gig and retired (although I'll always be proud of a newsroom act of mine that made him come up to me and say that he hadn't heard anything like that since the old newsroom days). 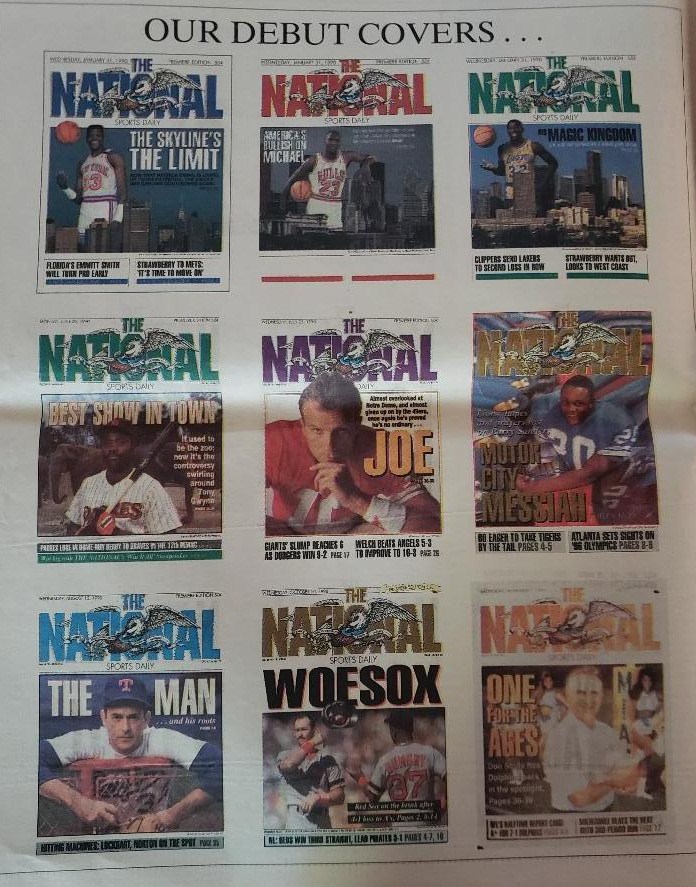 Here is a look at all of The National's debut covers as it rolled out its first publications to various metropolitan areas of the country (I'm still surprised we could find a copy of it in our tiny po-dunk town).
The National was a dream realized for many sports fans. Ever since USA Today's debut in 1982, probably even before, sports followers wondered what it would be like -- and wouldn't it be nice? -- to have a daily publication of nothing but sports.
Unfortunately, the cost of business was too much. The early '90s was not a strong economic period and the lack of advertising killed the paper (as it has so many others before and since). The National raised the price from 50 cents to 75 cents and that finished them off (to this day I can't figure out why people complain about the cost of a newspaper when it is cheaper than just about anything else that people buy).
I really miss it, which is why I'll always hang on to the "first and last" copies that I have.
But for those of you only interested in cards, I have another newspaper-themed anniversary for you. 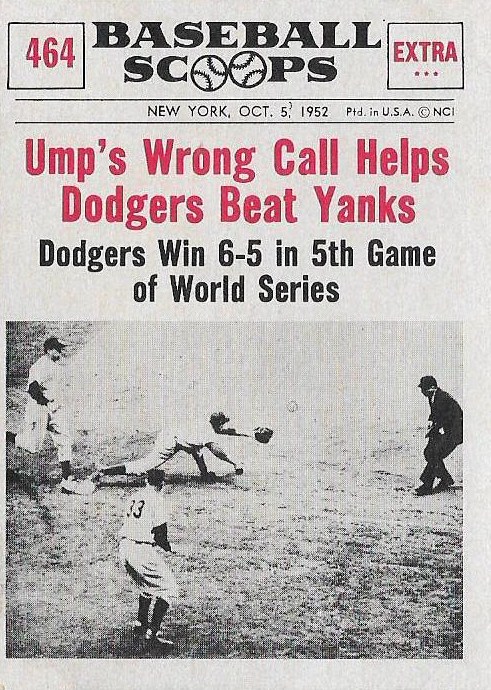 I finally put up my want list for the Dodgers portion of the 1961 Nu-Cards Baseball Scoops set!
Out of the many newspaper-themed sets over the years, this is probably the one that stands out the most and I've pretty much ignored it for whatever reason. 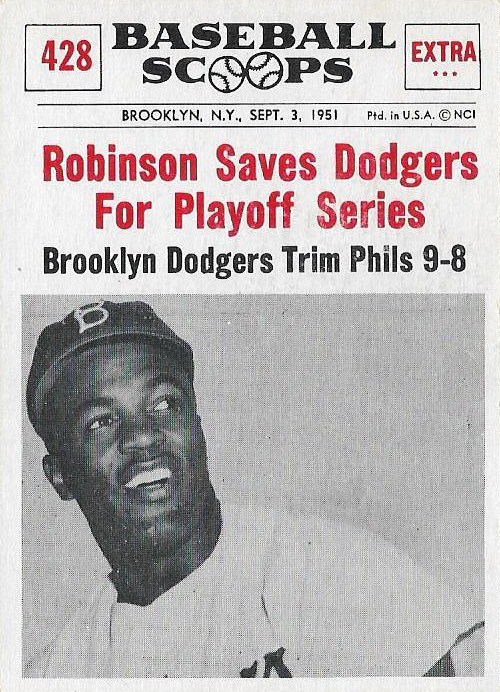 I mean it has everything that I love, the newspaper look, the banner headlines, the moment-in-time celebrations, the history. And it all came out 60 years ago. 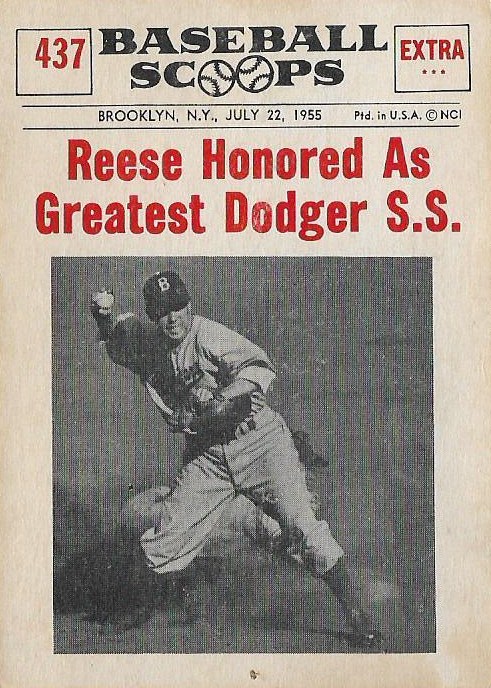 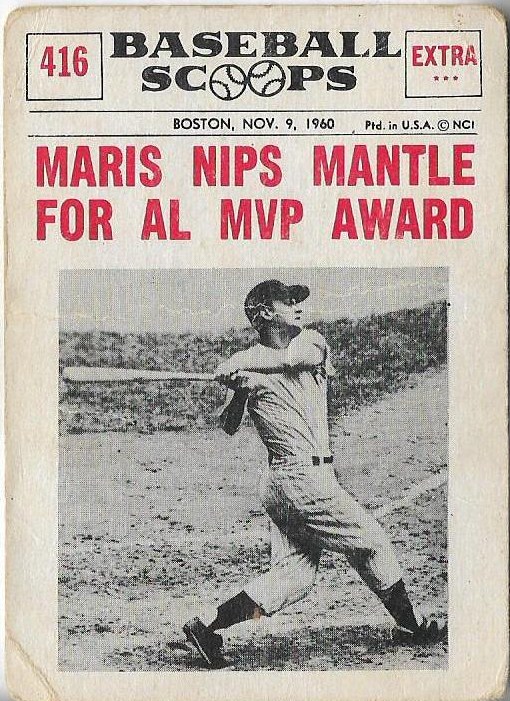 I don't know any newspapers that get rounded corners though. Creases, sure. 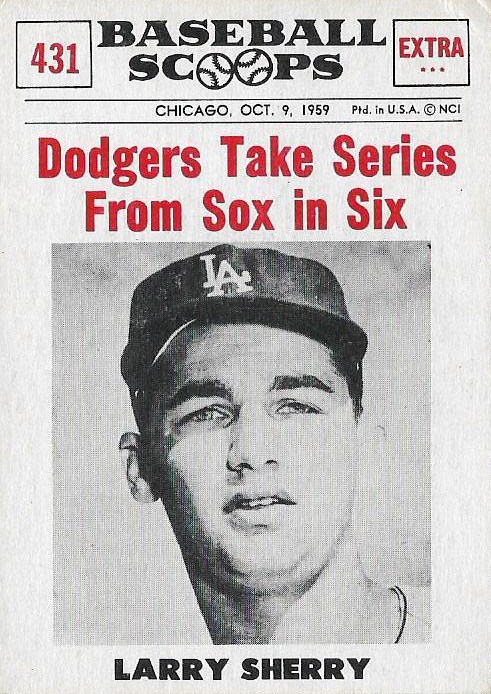 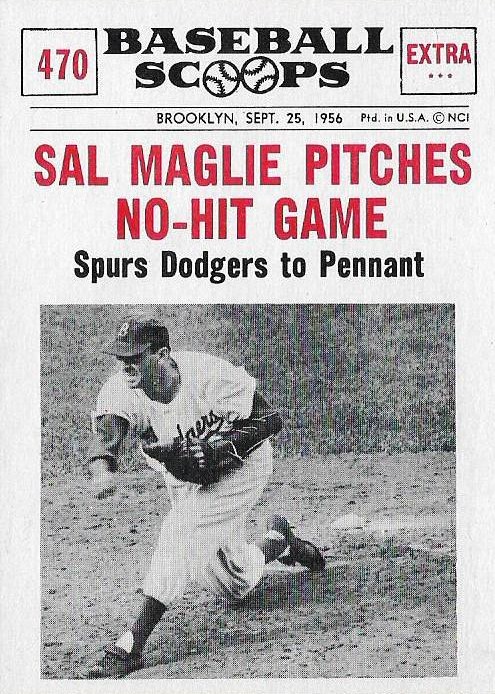 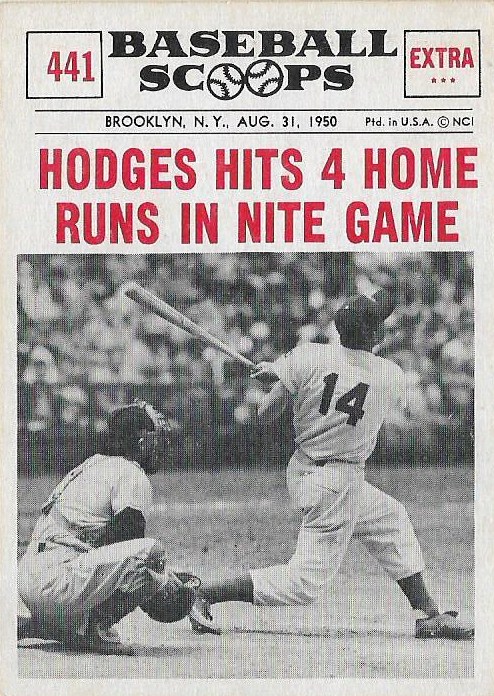 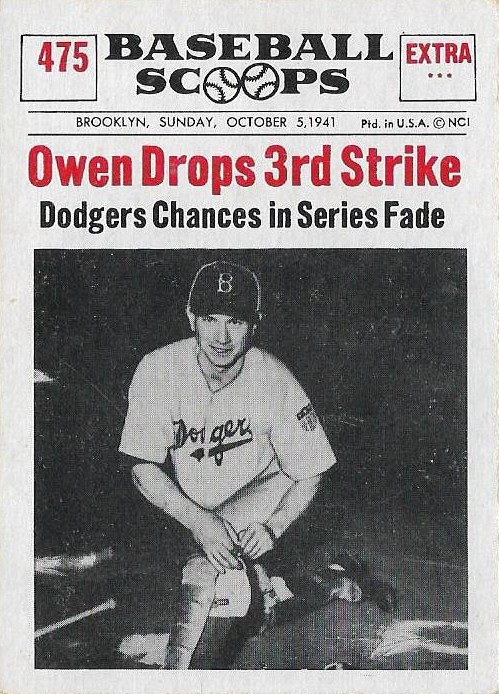 Wonderful stuff. And I have only three more of the Dodgers cards to get. I should throw them on my Nebulous 9 list.
So that's me walking through the newspaper morgue, digging up some memories from the old clippings of the past.
Like every newspaper, my newspaper struggles when compared with the past. When I think of how things used to be, I'm blown away about how good we had it. But I will always be proud of the role the media has had in sports and how the reason we know so much about those players and teams is thanks to newspapers and magazines and all those internet sites that we read now.
Yay for information. May it never go away.

Peter K Steinberg said…
Oh! Never heard of this publication. I thought at first it had to do with The National card show! Well, you've brought the paper back to life with this post. Thanks!
June 13, 2021 at 6:31 PM

jacobmrley said…
The run of The National corresponded with my initial obsession with journalism during my junior year of high school (I even eventually majored in it in college). There was a corner of my town that had all the newspaper boxes lined up (remember those?) and there was a trick where you could smack the coin release and pull on the handle and it would open for free. Being 16 and poor, more often than not I used this method to get my copy of The National. I always secretly felt that my refusal to pay 75 cents for a newspaper that I loved and poured over every day somehow contributed to its demise. This is why I understand paywalls and cough up the dough for them today.
June 13, 2021 at 6:49 PM

Shlabotnik Report said…
I remember poring over those detailed standings and "The Skinny". It was fun while it lasted.
June 13, 2021 at 7:19 PM

gregory said…
I don't remember this paper, but it reminds me of another newspaper-style publication I loved back in the '90s called The Hockey News.
June 13, 2021 at 8:00 PM

Fuji said…
What a cool collectible. I honestly hadn't given The National Sports Daily much thought over the past three decades, but I bought a handful of issues during their brief history. And I feel like I've seen copies here and there at the flea market over the years. If I ever come across one of their debut issues or final issue and it's reasonably priced... I'd grab it.
June 13, 2021 at 8:07 PM

Johnnys Trading Spot said…
I too can attest that I had not heard of this publication before either.
June 13, 2021 at 8:53 PM

Old Cards said…
Not familiar with The National, but I definitely grew up with appreciation for newspapers and their coverage of baseball. Living in a small town outside of Nashville as a kid, I was fortunate that my Dad subscribed to both The Nashville Tennessean and The Nashville Banner. I spent a lot time pouring over the articles and box scores. The article on Dravecky prompted me to check his bio.
June 13, 2021 at 9:19 PM

Unknown said…
I never read the National, but still miss it. If it had survived, I'm sure I'd read digital articles. I'm sure that it would get a good stream of online ad revenues, and it would be a great place for good sports writers to ply their trade, writing and submitting, when they are in between better paying gigs.

I've never really read print editions of Sports Illustrated or Sports Digest or the Sporting News either. very strange, since I read the sports section of the LA Times almost every day. Then I scan the sports news feed on yahoo and a few other on line sources.

I guess I'm not quite a sports junkie, as compared to business, politics and current events. My media spend of my hard earned $1 has always gone to Time, Newsweek, US News and World Report, Forbes, Fortune and so on.
June 14, 2021 at 12:30 AM

Jim from Downingtown said…
I remember The National fondly. My fantasy baseball buddies and I pored over it every day (including while at work!) to check out the latest skinny before making out our lineups for that night.

In Philly, we had locally-known reporters Jayson Stark and Al Morganti covering baseball and hockey for The National, as I recall.

P-town Tom said…
I, too, had never heard of the The National. During that time though I had a subscription to Baseball Weekly and I would devour every page until the next issue arrive.
You are so right, Yay for information!
June 14, 2021 at 6:57 AM

Anonymous said…
I remember the National, but not that it was a daily.

gogosox60 said…
I had an idea at the time of National demise that it could still exist as a service to local newspapers to subscribe to and have their sports section beefed up with all their daily info for sports and a few sports columns. Now except for big market city's sports section most other papers barely give to two pages to major sports. Look how the USA Today's sports section is so skinny. I think what papers are left really want the readers to read their online editions. But over the years The National could have lived on in several hundred daily newspapers everyday!!
June 15, 2021 at 12:47 PM