Switching off the TV set 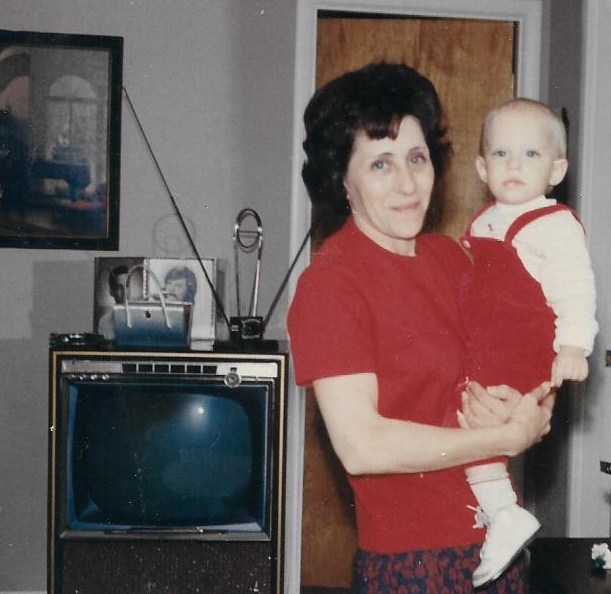 I completed the Dodgers team set for 1955 Bowman, aka, "the TV set," a couple days ago. Charlie Neal was the last card I needed.
I don't remember the 1950s, but I do remember the old, wood-panel TV sets. Both sets of grandparents had one and every time I mention watching Mets and Yankees games at my grandmother's house in Owego, NY, it was on the monstrous wood-panel model.
I tried looking for a picture of it in my mom's old photo albums that I've inherited, but didn't have any luck. I recall my mom having a dim view of the television, so maybe that's why.
However, I did find a picture of the wood-panel TV set that was at our house for awhile. I think my parents got it as a hand-me-down from my other grandmother, the one who is holding me in the picture above, back in 1966, with that TV in the background. I remember it sitting in the basement and, appropriately, watching old Godzilla movies on it on Saturdays.
A few years later, getting into card collecting more seriously, I liked the 1955 Bowman set a lot. It was one my first favorites of the old sets. As time went on, I liked it less and less, I'm not really sure why. The design is of its time as it could possibly be and I should enjoy that.
All of the Dodgers cards I own in the 20-card set have been worn down by time, which is fine. Unlike the '56 Topps set, I haven't been too concerned about condition for other early-to-mid '50s sets.
Let's take a look at each of the Dodgers in this 65-year-old set: 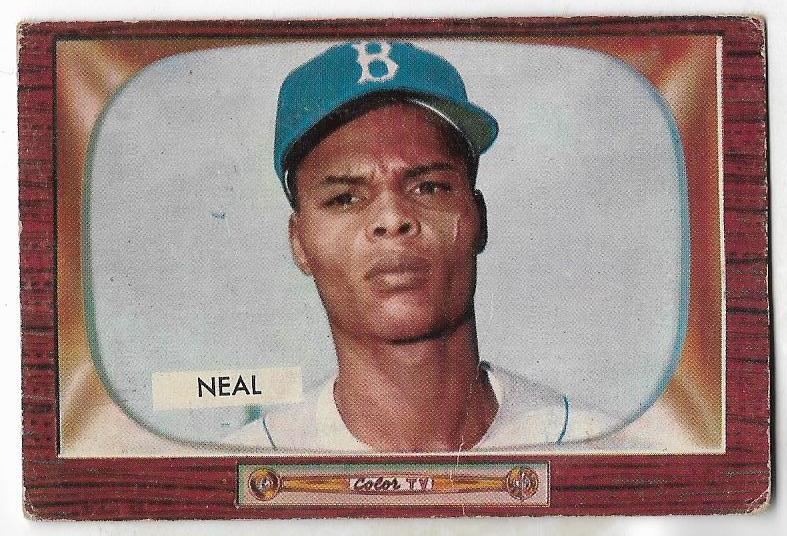 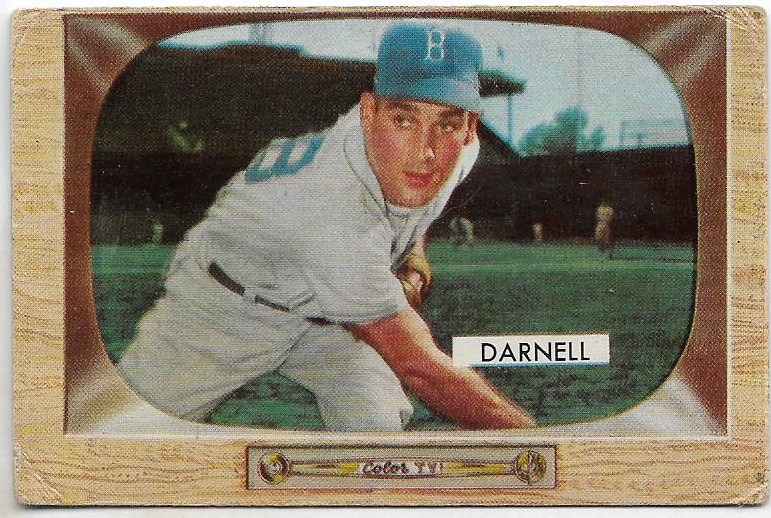 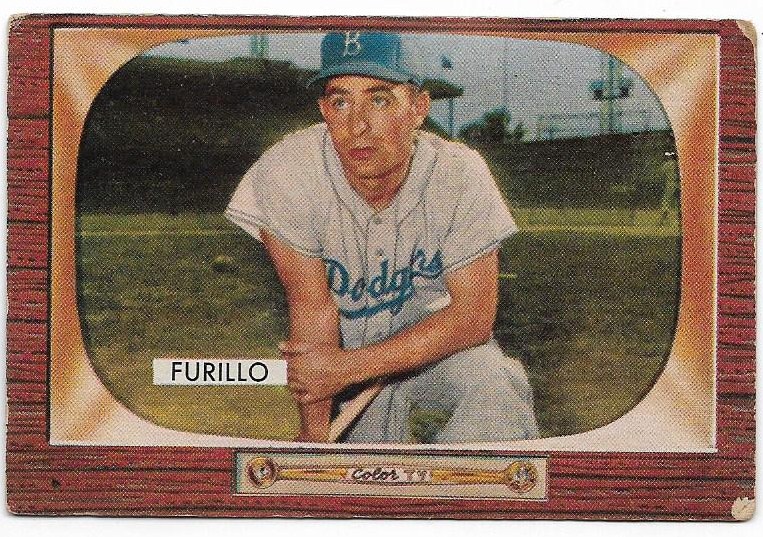 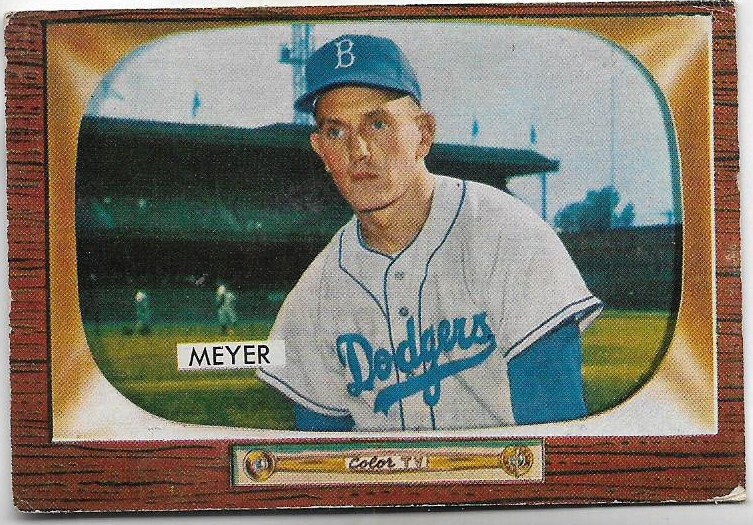 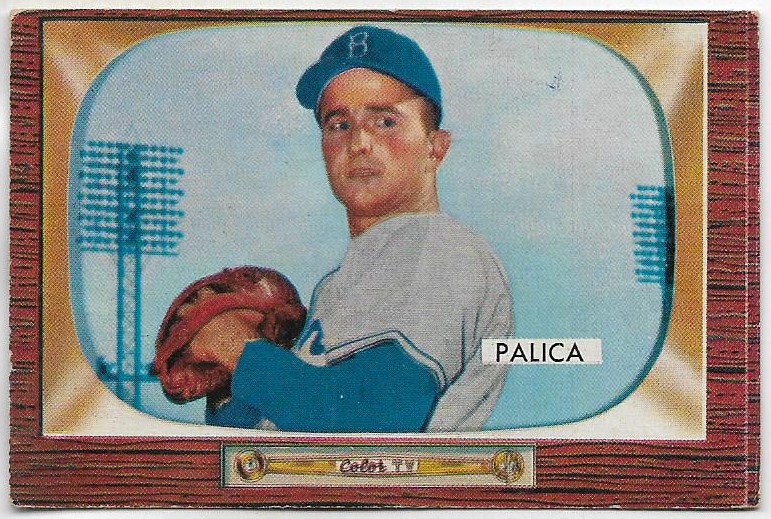 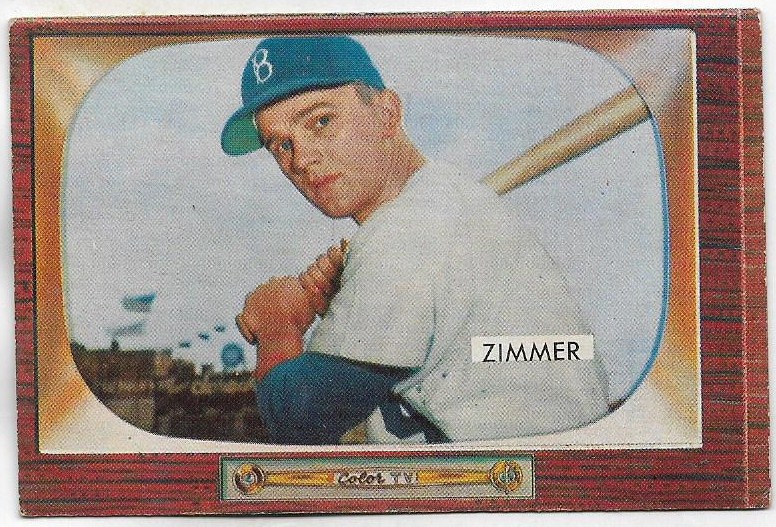 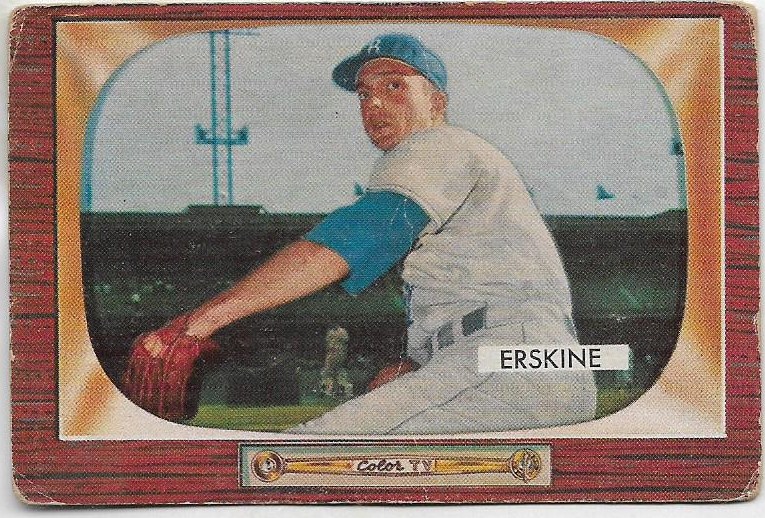 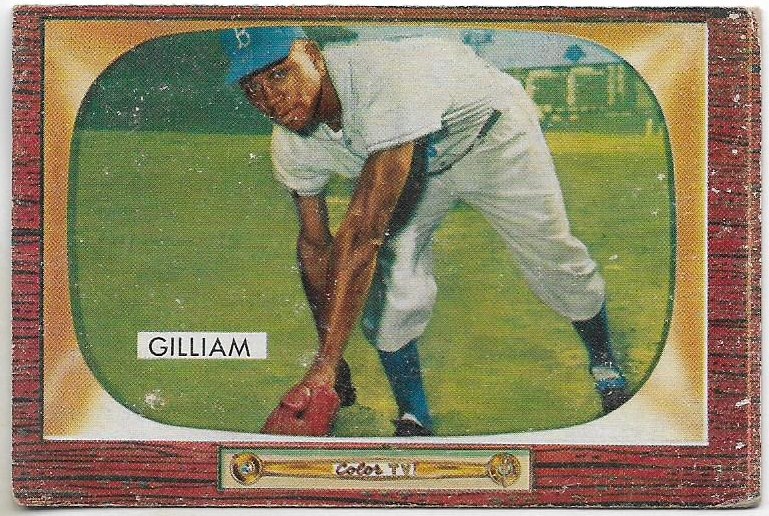 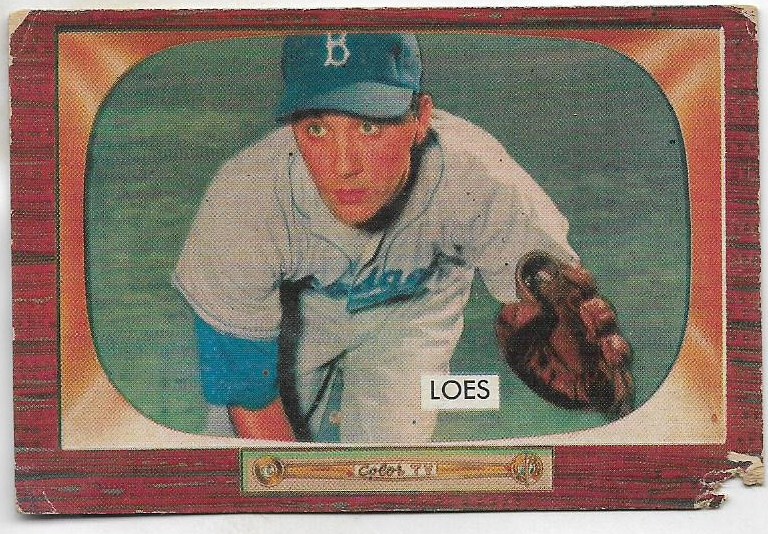 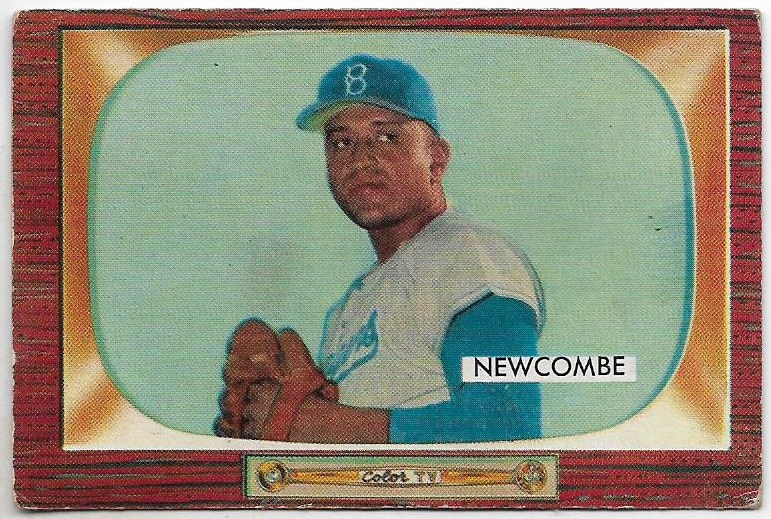 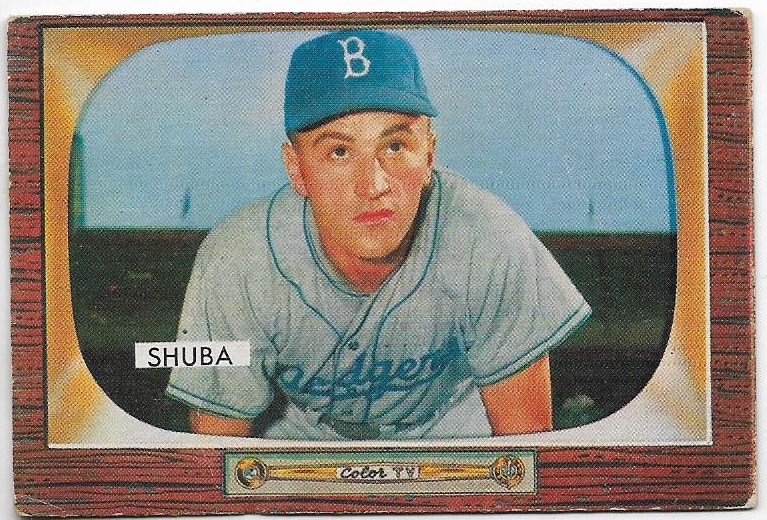 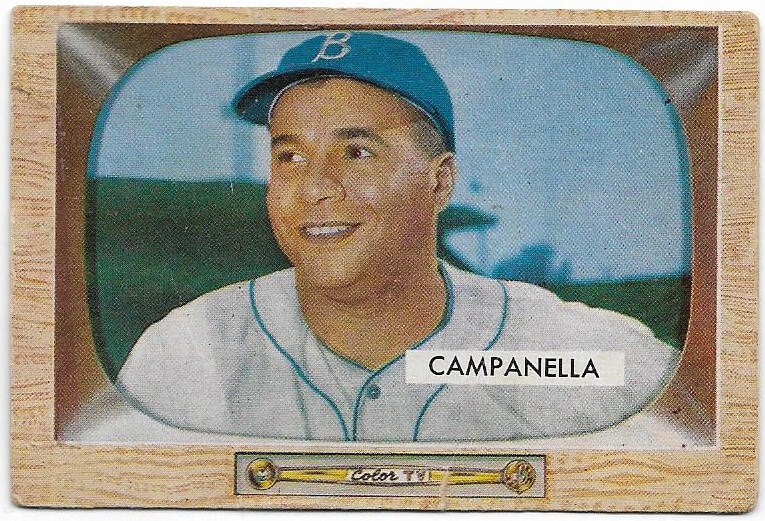 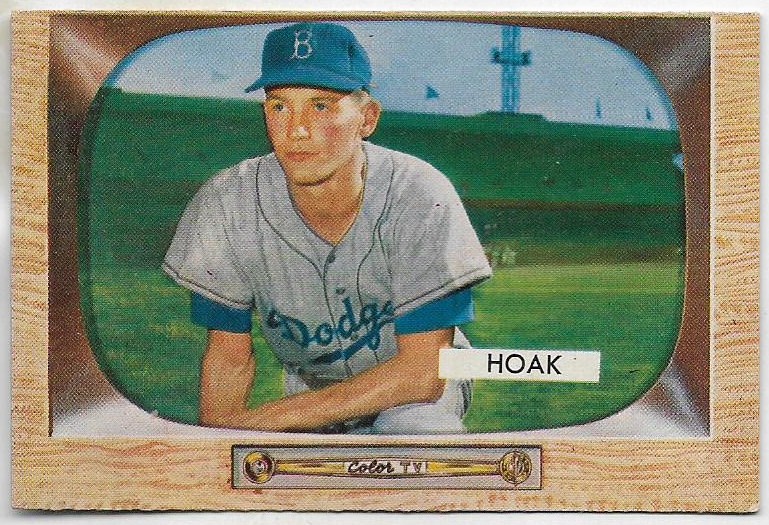 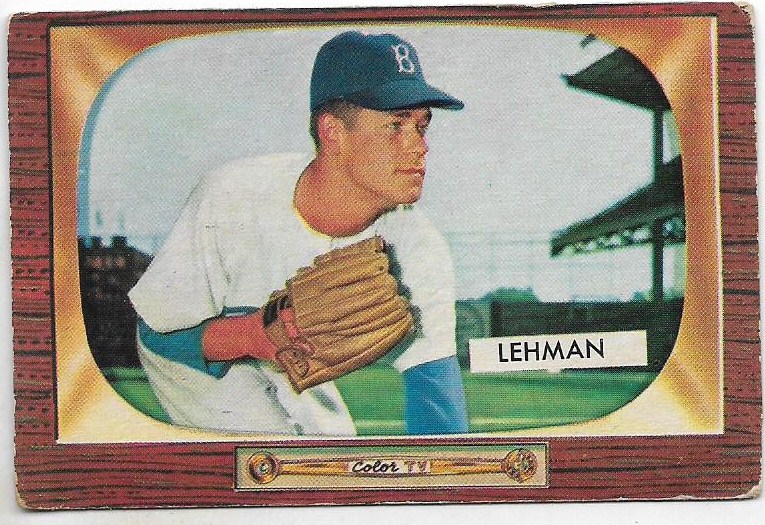 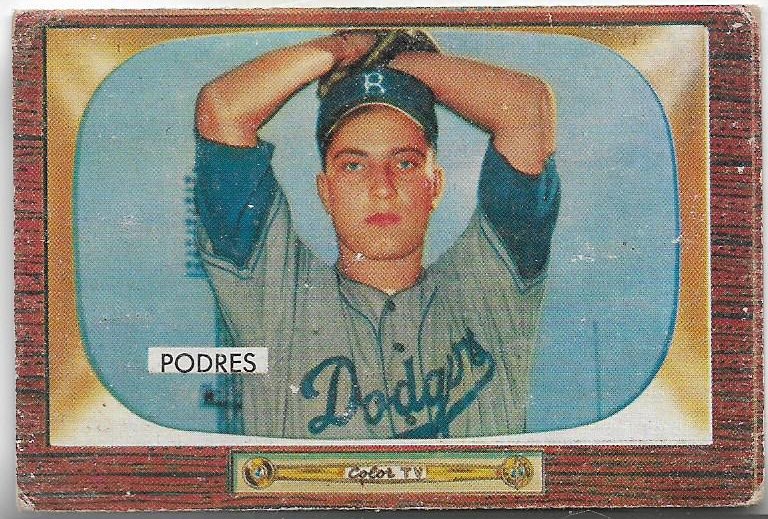 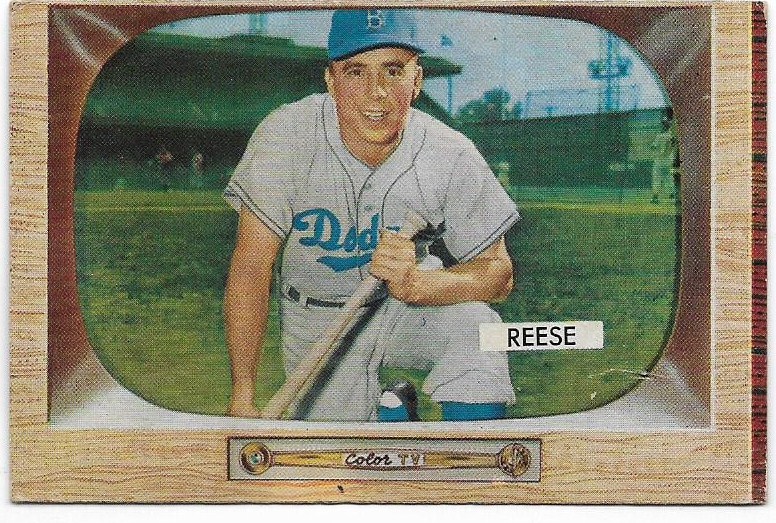 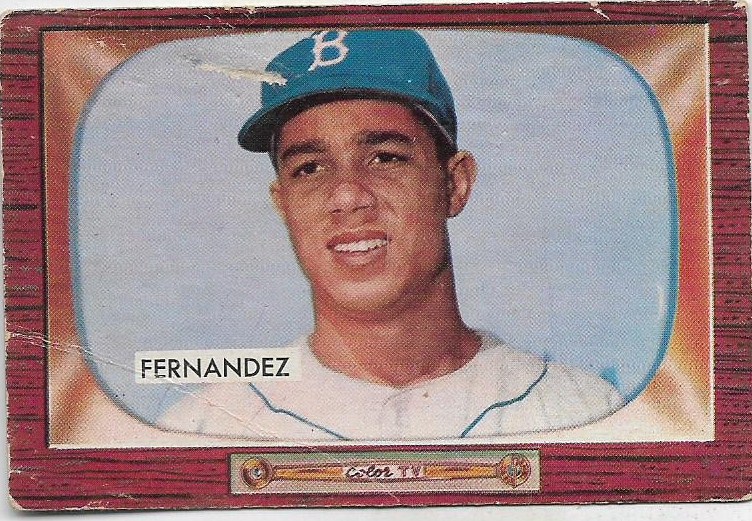 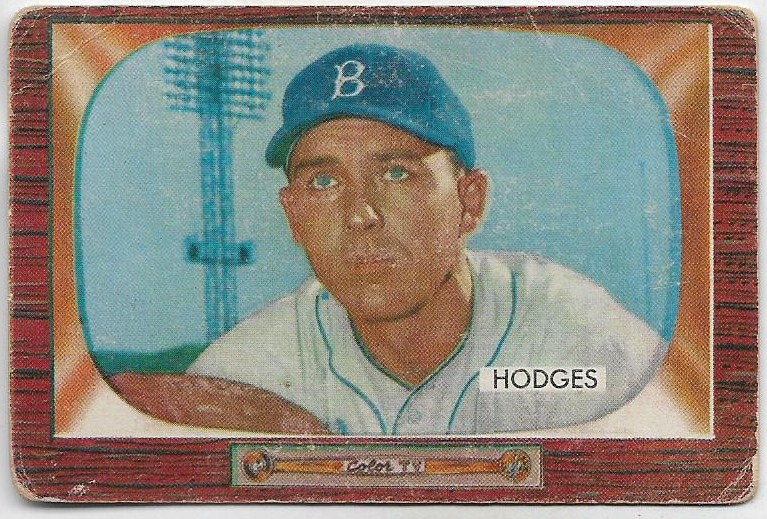 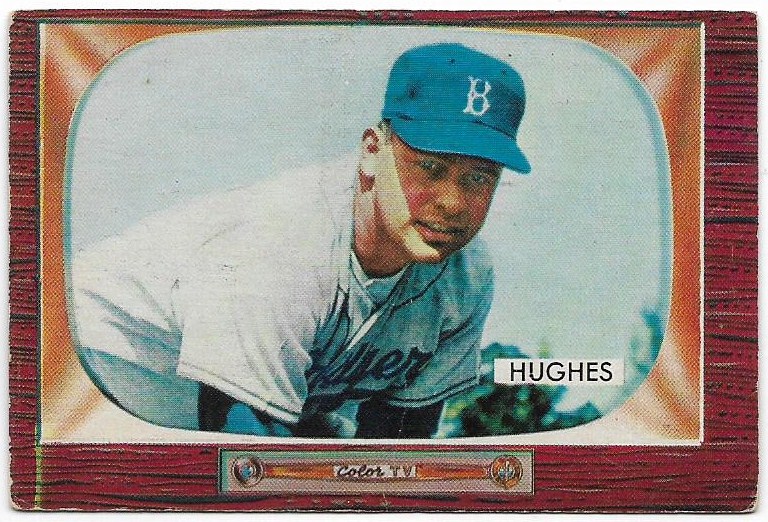 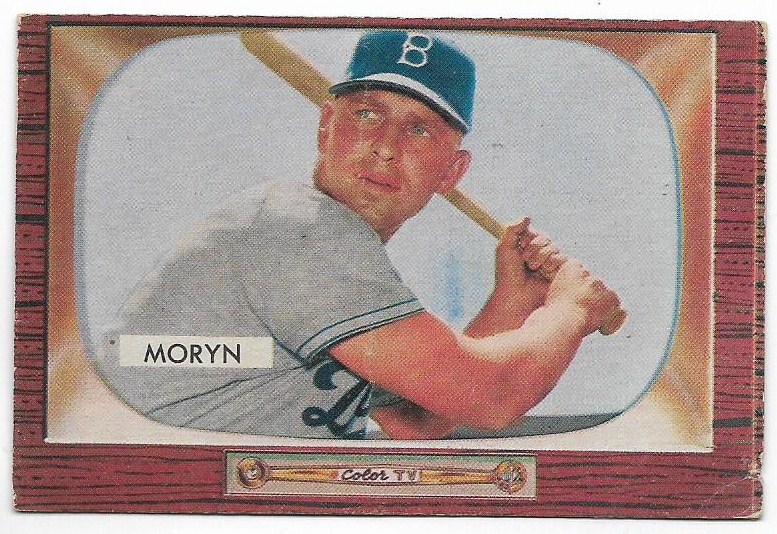 Someone took a bite out of the Billy Loes card.
Interestingly only four of the Dodgers show the lighter panel border, which appears on the first 64 cards of the 320-card set.
Also interesting: this is one of the few '50s set in which I didn't own a single copy until I had a blog. Just about every other major card set had worked its way into my collection during the first 30 years I collected but somehow the first 1955 Bowman card -- Chico Fernandez -- didn't arrive until 2010.
I also didn't know until then that the '55 Bowman cards weren't regulation 2 1/2-by-3 1/2 size. It's amazing how basic facts like that slipped past me back then.
Now, I know a bunch of stuff about the set, like how Campanella, Reese, Newcombe, Furillo and Erskine appear in the Bowman set but not in the Topps set. Meanwhile, Topps boasted Robinson, Snider, Koufax and Joe Black in its 1955 set, which Bowman did not. Players like Gilliam, Podres, Hodges and Zimmer appear in both sets.
This set is also significant as it includes 31 different umpire cards, and it's the last of the '50s Bowman sets and signals the beginning of the Topps monopoly.
Aside from 1951 Topps Dodgers team set, which I completed earlier this year, this is the oldest team set I've finished. I guess now I should get to work on finishing those 1954 and 1955 Topps team sets.
I probably should switch off the TV set and do something productive, right mom?

bryan was here said…
Congratulations on completing another mission. I've gained an appreciation for the '55 Bowman set the last few years, and have added a few, cheap lesser-grade examples to my collection. Even when they're rough, they still look great. That thick cardboard holds up quite well.

It's a design that stands the test of time. When Topps used this for their 2004 Bowman Heritage, one of the variations was a black and white TV photo! Needless to say, that got a chuckle from me!
June 18, 2021 at 7:17 PM

Jeremya1um said…
Congrats on finishing the Bowman set. It’s a major accomplishment to finish off a vintage ‘50’s set.
I wonder why Jackie Robinson wasn’t on it.
June 18, 2021 at 8:32 PM

Nick said…
Congrats, Mr. Owl! This has always been one of my favorite vintage sets - it screams 1950's like nothing else of its time. I bought a trimmed copy of that Pee Wee Reese for $5 at one of the first card shows I ever attended as a kid, and it's still one of the more treasured pieces of my collection.
June 18, 2021 at 10:25 PM

Fuji said…
Cool team set. Congratulations on completing it. Although I consider this to be one of the most recognizable designs... I don't think I've ever gone out and picked up a card from this set. I'll have to check my vintage binder to see if I have a card. If not, I guess I should start looking through the checklist and find someone to represent this set in my collection.
June 19, 2021 at 11:12 AM

Adam Kaningher said…
My dad brings up this set a lot when we're talking vintage cards. He would have been eight when this came out. I'm lucky to have five in my collection.
June 20, 2021 at 9:46 PM